This week's offering is a few clicks down the page. But first...

Before getting to post update news or this week's offering, I want to catch up on some things that readers have shared, in response to previous posts. I know not everyone looks at comments, and more often than not, I don't answer the comments in the comments, as I never know if the original poster will be looking for a response. But several people have said or shared things recently that I thought worth bringing to everyone's attention, and I'm going to get to some of them now, and more in the future.

More than 11 years ago, I posted a great Suzie and Rodd duet, titled "I'm the Wife". Well, a correspondent named Michael recently pointed out that the composer of the flip side, "Country Boy", got his name in the local Kingston, N.Y. paper, in 1967, by stating that Preview Records had recorded his song, no doubt presenting this as a great accomplishment, rather than something he'd paid them to do. The newspaper article can be found in the lower right quadrant of this page. Michael further found an article in the Philadelphia Inquirer, from 1965, on a similar theme, this time regarding a song-poet named Helen Zorkowski, who had several songs recorded by preview over the years. That article is here.

Thanks, Michael, and thanks for the nice words about my work here!

Then there was a comment from frequent contributor, and host of his own wonderful blog, Sammy Reed. On the post where I featured a song-poet who claimed to have written "The Lord's Prayer", he linked to a post he'd made in which another song-poet claimed to have created the words to the gospel song "Oh, Happy Day", and that post can be found here. Thanks for all your help and comments over the years, Sammy!

In response to my obituary-with-soundfiles for Pete Seeger (which is one of the few post 2008 posts which I haven't fixed yet), Martin has shared with me that he posted a rare audio of a Pete Seeger concert from East Berlin in 1967. It can be found here - you can download it from near the end of the German part of the post. Thanks very much Martin. I look forward to enjoying this.

And finally, just this week I heard from the daughter of the singer who went by the name Rod Barton. He is the only person from the song poem world that I've actually spoken to, and he and I had three phone conversations many years ago - unfortunately, he has died at some point in the years since those conversations. Her comment can be found on this post.

In addition to all that, I have, as usual, corrected even more of the early posts to this site. I've worked my way back to 2006, the year with the fewest posts in the history of this blog (just nine). At that time, I was sharing things that tickled my fancy, whenever I got around to it.

Specifically, today, I've repaired five posts made in July of 2006. Four of them were made on the same day, July 1st. These offerings were all over the map, and included a terrifically awful vanity 45 from a folky type singer, an equally wonderful (and also possibly vanity) 45 from a 13 year old girl, a failed hit 45 that I just love by Joan Armatrading, and a B-side to a late '50's hit record which I've always loved, and which features Thurl Ravenscroft. I ended that month with a post featuring two songs from Jimmie Driftwood, one of my favorite performers ever - the second track there remains one of my all time top 50 tracks. Some of this material later got posted to WFMU's blog, but I thought I'd "fix" the postings on this site, anyway. 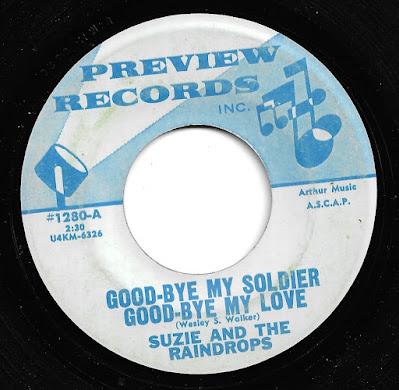 Today, it's back to the early days of the Preview label, a period which I know to be a particular favorite for many song-poem fans.
And this is a nice one, sung by Suzie Smith, with "The Raindrops" credited as the backing singers, and a track which sounds very much to my ears as something Rodd Keith probably put together. It's called "Good-Bye My Soldier Good-Bye My Love" (to phrase it exactly as it is on the label). Vietnam is never mentioned here, but this could probably be considered a Vietnam related song-poem, based on the lyrics.
Suzie sings over a martial beat for the verses, which then swings into double time - and some nice harmony vocals - for the choruses. The lyrics are pretty much boilerplate "my soldier love has left for the war" stuff, but the arrangement and vocal make them fairly effective.

Suzie Smith appears on the flip side without The Raindrops, on a song called "The Key to My Heart". This lyric is tied to the backing track that Rodd Keith used perhaps more than any other in his Preview days, most notoriously when Preview actually used the exact same track on both sides of the same 45.

I don't think Suzie or anyone else behind this particular side do anything special with the material, and this is one of those tracks that seems to me to go on for about five minutes (really barely more than three). Maybe you'll like it more... 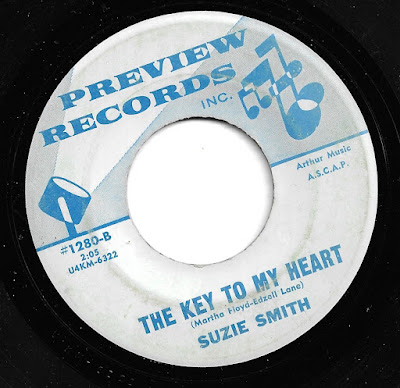 Email ThisBlogThis!Share to TwitterShare to FacebookShare to Pinterest
Labels: Preview, Song Poem of the Week, Suzie and the Raindrops, Suzie Smith

Don't have much to say for the (as you note) overused b-side...but the a is a good pop record, although it doesn't really sound like any other pop record ever made. Strong arrangement, solid singing. Thanks for posting!