Sammy is Such a Sandy Singer 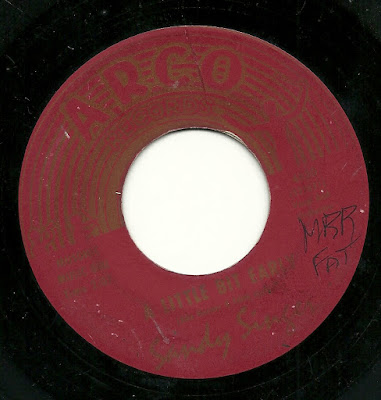 It's been quite a while since I offered up a slice of Sammy Marshall - four months, it seems. That's understandable, I guess - while I love some of his records, the majority of them are quite "samey" and in a style that doesn't make "Samey" work. But here he is, early in his career (1962, per the song-poem database website), on the tiny Arco label. I know that label is very difficult to read, but here he is operating under the name "Sandy Singer".

In this case, he's doing one of his patented, peppy, early '60's, twist style numbers, in this case, one called "A Little Bit Early".

The flip side has pretty much the same beat and feel, with the addition of some stereotypical Native American drumbeats and sounds, as well as equally stereotypical lyrics referring to the same population. These aspects are pretty standard issue for the era, while and not so acceptable today. It's a story of a love affair between the singer and an Indian beauty, called "Oklahoma City, Okla". 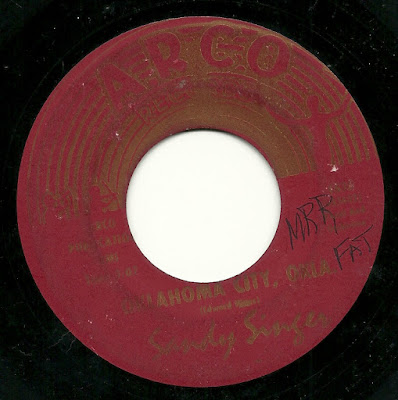 Dick is a Real Pro

Howdy, everyone,
First, I wanted to thank everyone for their recent comments﻿. I would like to point you to Darryl Bullock's suggestion that on the "Carof on the Boys" post from last month, the singer might be Rodd Keith (who did record on that label). I'm not sure I'm hearing it, but I'm not sure I'm not, either. Thanks to Stu Shea for more information about Mando Guitars, too - it seems the group chose its name completely separate from the actual instrument of that name, which didn't exist at the time.
I particularly want to acknowledge Sammy Reed, who has identified the release date and some other information regarding my last few posts. But even more so, I want to point to you Sammy's own site, where he has posted nearly three dozen song-poems, primarily ones from this site which were lost in the Divshare meltdown a few years ago.
I do intend to fix those posts - and maybe this will push me to do so (I took several down about a year ago, intending to fix them) - but in the meantime, and that may be a long meantime, you can find a bunch of them here.
And now, back to the countdown: 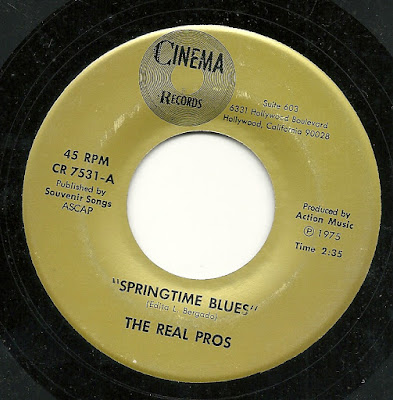 From 1975 comes a set of two soul-pop entries, featuring the unmistakable voice of Dick Kent. It is a song-poem truism - to use the phrase of another collector - that for those labels that did try to copy trends in pop music, they always seemed to be 2-4 years behind those trends. So it is with this record, both sides of which feature musical sounds which strike me as being very 1971-72 in nature.

"Springtime Blues" is pressed a little bit off center, giving it a minutely wobbly effect, a fun feature for a song which literally mentions singing out of tune. The song-poet did not provide anywhere near enough lyrics for a 150 second single, so we are treated to a lengthy band instrumental (over 50 of those seconds), featuring electric piano and (buried) wailing guitar, and then a repeat of the first verse!

On the flipside is another midtempo shuffle, one which even more strongly sounds like 1971 to me, especially in the drumming and piano playing. This side is generally put together better than "Springtime Blues", and the lyrics certainly have more meat. If it wasn't for the ultra-cheesy synths, I could absolutely believe someone could find this record, and believe it was a failed attempt to make a hit record in the early '70's. Not a very good one, but it does have that sound, which is not really something I find myself saying, all that often.

Download: The Real Pros - Don't You Know I Love You
Play: 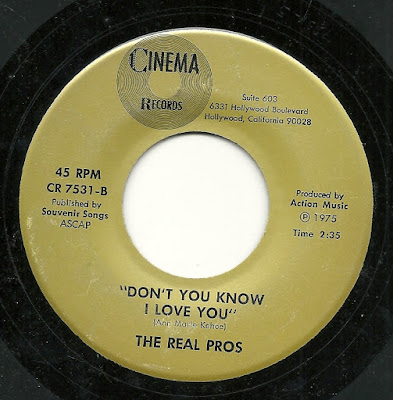 Email ThisBlogThis!Share to TwitterShare to FacebookShare to Pinterest
Labels: Cinema, Dick Kent, Song Poem of the Week, The Real Pros

A May Treat - A Full Song-Poem Album, Courtesy of Iris Tipton

As I've alluded to, perhaps a bit too often, actually, I've not exactly been providing a song-poem record "a week", more like a song-poem record every ten days. As a bit of an apology for that, and a reward for sticking with me, today I have an entire song-poem album for you. This was produced by Iris Tipton, a prolific song-poet, using 12 song-poems she commissioned from two song-poem factories, and titled, most catchily, "Let's Go Country with Iris Tipton, et al" (or, "Country Style" if you prefer what's on the record label itself), released on her own Iris label.
Iris Tipton wrote the all-time classic song-poems "I Spent My Last Three Dollars On an Irish Sweepstake Ticket, and "In God We Trust", both of them high up on my list of favorite records (song-poem or otherwise) and the latter of which was the song with which I kicked off the "song-poem of the week project, way back when. On this album, she co-wrote all the songs on side one with another prolific song-poet, John W. Stephenson (who also had his own label, Cowtown).
Sorry about the crappy sound in advance - it doesn't appear to be my turntable/needle, as I tried a few times on two of them to get it to play better. I think it's just the pressing, but if I can get it to play better, I will replace the files. ﻿ 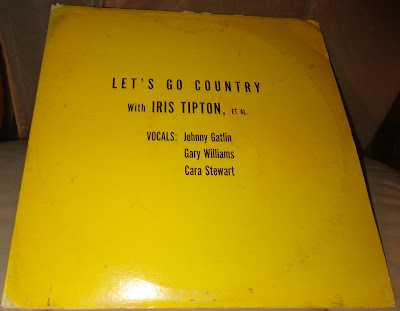 As I have done before with full albums, I have not separated out the tracks, but rather, have side one and side two for you dining and dancing pleasure. The performers on side one are the rarely documented Johnny Gatlin (who I'm guessing, from the sound of him, was working with the Globe song-poem factory) and the quite well known Cara Stewart (with, of course, the Lee Hudson sound). One may discern a sameness about the melodies of some of the Johnny Gatlin songs. I don't know about you, but it is with great relief and great enjoyment that the final song, featuring the incomparable voice of Cara Stewart, breaks the tedium, even if "physique" is hardly a song that belongs in a sultry love song. The credits listed for the six short songs (the whole side is 13 minutes long) can be viewed from the label, below the links. 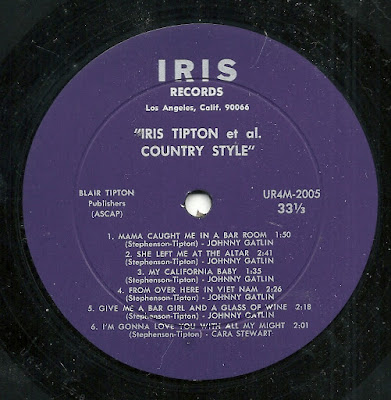 Side two continues with Cara Stewart, happily heard on four of the six, slightly longer tunes (this is a 16 minute side), and joined for the first two, by the previously unknown Gary Williams, who clearly was also from the Lee Hudson song-poem outfit. The subject matter and lyrics to "I Selected Your Picture" make that one a standout. Even with that, I can't help but smile, again, when Cara returns, although her first song on side two, "I Want To Lock You Up Inside My Heart", has some of the most insipid lyrics I've ever heard. 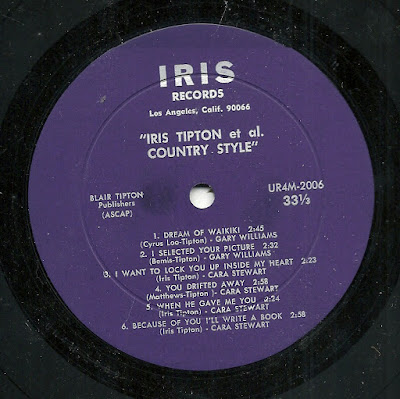 Here's that back cover: 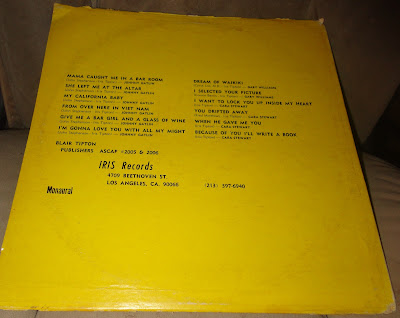 And here's the address on that back cover, 4709 Beethoven Street in Los Angeles