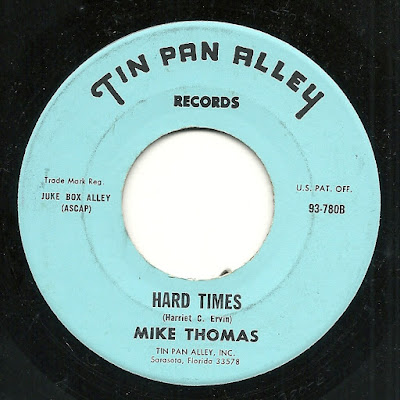 I'll write it again: "Cut-Rate, Dime-Store Zeppelin﻿". That's exactly what I thought upon listening to "Hard Times" on the Tin Pan Alley label, as sung by Mike Thomas with a trio of musicians behind him. If there's a third adjective to further modify the crumminess of this performance, it applies, too.
And I honestly do wonder if someone at TPA told the band and the singer, "Hey, go listen to this Led Zeppelin stuff - it's really popular - see if you can work up something like that".
Whether that happened or not, the results fit the description, at least to these ears, particularly after the 1:30 point. The slow, bluesy backing, the guitarist wailing his solo around those chords in a certain way, the drawling high pitched singer, the drum fills near the end. Not that I think any of this is done competently, of course. It's not. But I can't imagine that they stumbled onto this genre by accident. Even if the results are sort of a car crash.
Download: Mike Thomas - Hard Times
Play:
On the flip side, we have an earnest performance - and a very typical one at that - of an equally earnest, religious lyric, in a song titled "Lord of the Sky", also by Mike Thomas. Nothing much stands out here - this could be the quintessential TPA release of this era.
Download: Mike Thomas - Lord of the Sky
Play: 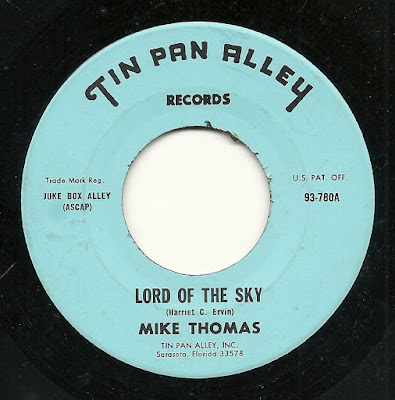 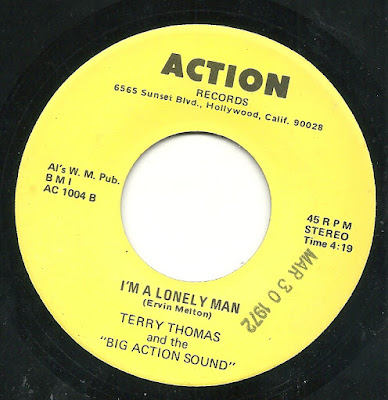 Relatively early in my days of song-poem collecting, I asked song-poem maven Phil Milstein for his insight into what was the most popular song-poem, among those he'd heard from and interacted with. His answer was that it was Gary Robert's magnificently weird and half-assed "Do You Know the Difference Between Big Wood and Brush". This made sense to me, because not only was it likely the first song-poem most fans heard (at that point, at least, as it was the lead track on both the first vinyl and the first CD song-poem compilations), but it has a lot of the hallmarks (sic) of the best/worst of song-poems - utterly personal lyrics, no sense (by the lyricist) of what will and won't work when set to music - in this case, spectacularly so - minimal effort by the backing band, and a singer who is no great shakes.

Today, I have an example of what happens when a musical genius, his better days behind him, is offered a chance to work with a similarly convoluted, personal set of lyrics, words which have no business being made into a song. And I find the results stunning, sad, astonishing at times. I would not rank the weirdness on a level with "Big Wood and Brush", but this record is deeply odd in its own ways, while sharing that glorious factor of incompetent storytelling in the lyrics.

The genius in question is Rodd Keith, performing on one of the first records released on Sandy Stanton's "Action Records" label, along with the "Big Action Sound", which is simply the Chamberlin. My guess - and it's just that - is that at this point (1972), Rodd was under contract with MSR, and could not appear as either Rod Rogers or Rodd Keith, so he shows up here as "Terry Thomas", perhaps in honor of the great British comic actor.

Anyway, this record is a mess. Rodd's Chamberlin choices, while they do contain some interesting parts, are often shrill and ugly. Vocally I hear a shell of the man who'd offered so many great performances in the 1960's. And the material he was given to work with is... something else - I'll let you discover its charms.

See what you think!

On the flip side is a song for which Rodd - as Terry Thomas - actually took co-writer credit. It's a better song (lyrics by the same person as on "Lonely Man"). Rodd sounds a bit more engaged, and the track is more cohesive, too, but there's nothing there that holds my attention. Your mileage may vary.

Download: Terry Thomas and the "Big Action Sound" - Make Up Your Mind
Play: 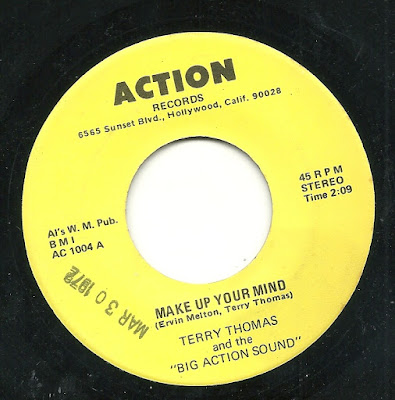 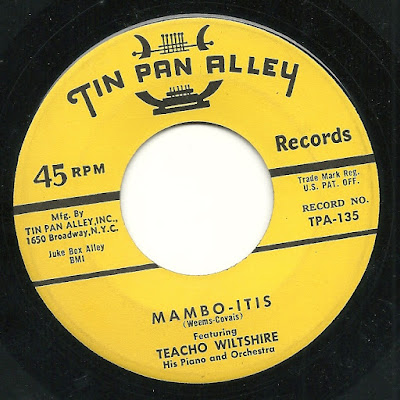 Today, we're going to travel back in time, to the era when America was Mambo crazy, and join with one of my favorite early song-poem purveyors, Teacho Wiltshire (who, in a rare exception to the song-poem rule, went on to a significant "legit" career in music), on one of my favorite labels, Tin Pan Alley, for a little bit of MAMBO-ITIS! Take it, Teacho:

Having just expressed my undying appreciation for Teacho, I must now backtrack and say that I find very little like about the song on the flip side, "Time is Precious (Don't Waste It)", or his ingratiating, smarmy vocal performance. Perhaps you'll find more to like. 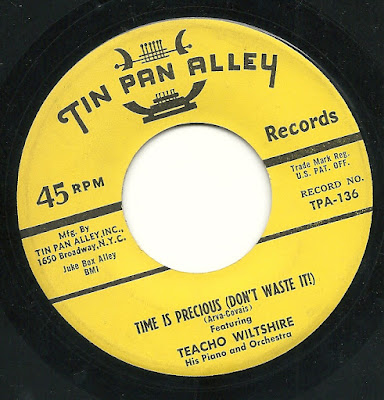