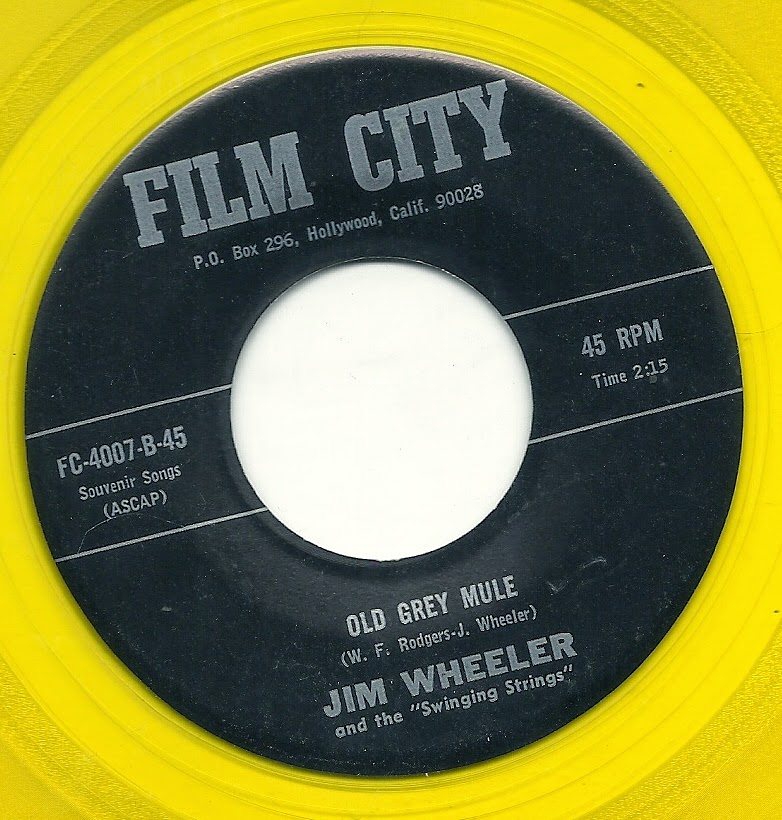 I was effectively out of town the weekend before last, and knew I'd be a bit late updating the site as a result. What I didn't know was that, within about 24 hours of returning home, I'd lose my internet connection for the better part of a week. I was (and am) online at work, but that wasn't going to help, if you know what I mean.

So I've had one of those rare periods where I've been unable to post for two weeks. And I don't like it. I'm going to try and post every four or five days until I'm back on schedule in a few weeks. For this week, I don't have much time to blather on about it. Suffice it to say that it's a very late period Film City masterwork (okay, that's a bit of an overstatement - it's a work), featuring Jim Wheeler. ﻿Note that Wheeler gets co-writing credit on both sides.

The better of the songs, by a wide margin, is on the b-side. "Old Grey Mule" is no great shakes, and the sound quality is awful, but there is a home-spun charm about the lyrics, at least if you don't mind hearing about the singer getting beaten up by.... well, I'll let you hear it... and as always, the otherworldly sound of the Chamberlin.

The flip side of this record, "The Lawman's Creed" is a genuinely tedious (four and a half minutes!!!) telling of an Old West tale, with an ironic ending straight out of six dozen other songs and stories of this type. I swear this song seems ready to stop entirely at a few points along the way, and the story could be summarized in a half-minute at most. 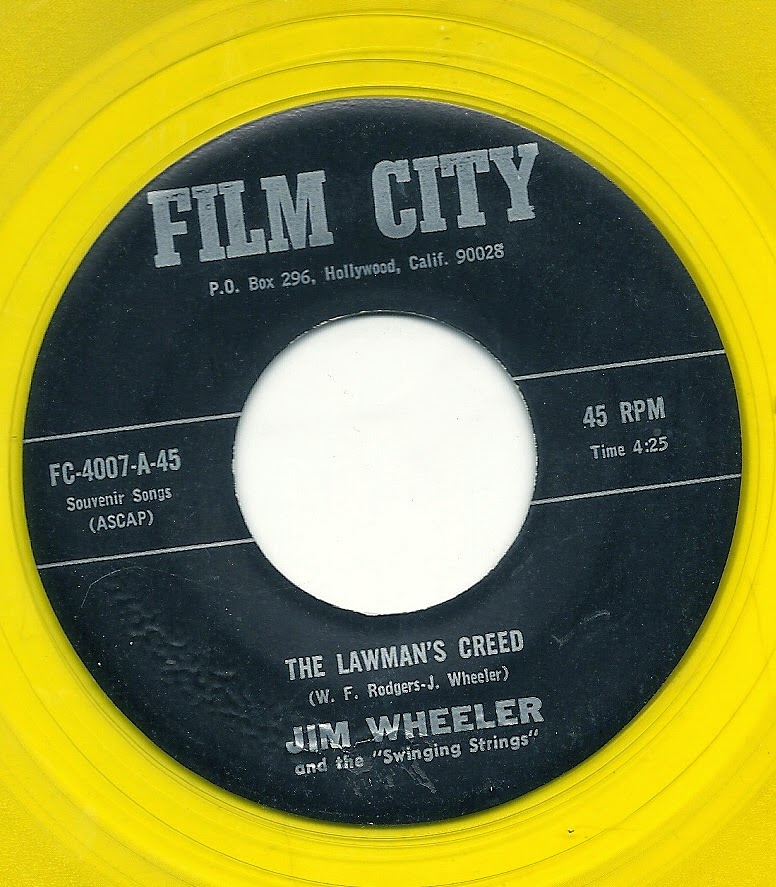 Cara is Blue, and Sonny Thinks You Want to Cry 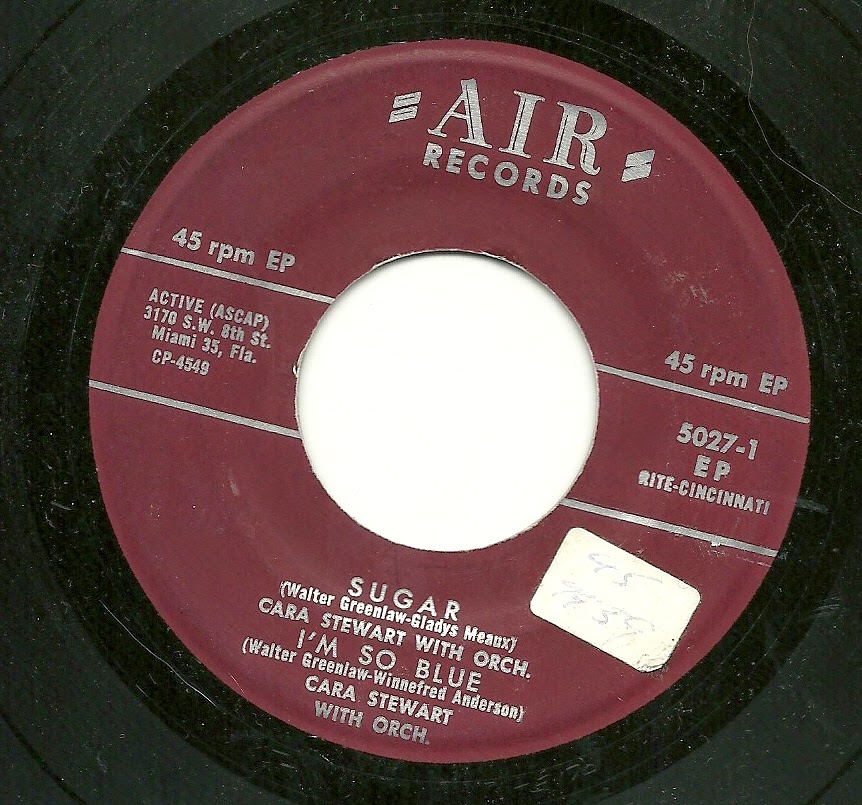 The Air label typically released song-poem material produced by other companies - I can't think of one which didn't feature performers associated with one of the song-poem factories, and there are multiple examples of a record on Air Records existing on another label, sometimes in differing sound quality.

There are examples of both duplicated songs and questionable song quality on today's feature. The first song on this EP is a song called "Sugar", sung by Cara Stewart (with Orch). I'm not including it here, because I've already shared the exact same recording (which comes from the Lee Hudson song-poem empire) in a previous post, except that the release I've already featured appeared on the tiny Caveman label. You can find that enjoyable (if poorly written) song here (although, oddly, Orch didn't get the credit they deserved on the Caveman release of this material - perhaps it was a contractual issue).

The other Cara Stewart (with Orch) song on the EP is the equally enjoyable "I'm So Blue". As usual, Lee Hudson provides his dreamy backing, and Cara sings with that irresistible smile in her voice, one that can almost lead you to overlook the sad story she's telling us.

The flip side of the record comes to us from the Globe song-poem consortium, featuring their go-to guy, Sammy Marshall (with Orch). While the two songs on the A-side sound just fine, the songs on the flip sound to me as if they were literally mastered off of another 45. Given that, as I said, many Air 45's feature songs which also appeared on other labels, this is entirely possible. Sadly, the crappy sound on the songs on side two of this EP are far from the only recordings on Air Records which were released in this level of sound quality.

And that's kind of a shame, because the first song on this side has some appeal, with a peppy beat, a warm Sammy Marshall (with Orch) vocal, and some fun instrumental stuff going on in the backing track here and there, especially that opening guitar. I'd never claim this is great stuff, only borderline okay, but I'd still like to have heard it in decent sound quality.

"You Want to Cry", also featuring Sammy Marshall (with Orch), finishes off the disc. The sound quality again sucks, but I'd be hard pressed to work up the energy to care, as I doubt I'd want to hear this one twice even if it was digitally remastered and released in the highest sound quality ever achieved.


Download: Sonny Marshall with Orch - You Want to Cry
Play:

It's impressive how different "Orch" sounds from the A-side to the B-side. It's almost as if there were two different bands playing. Oh, wait... 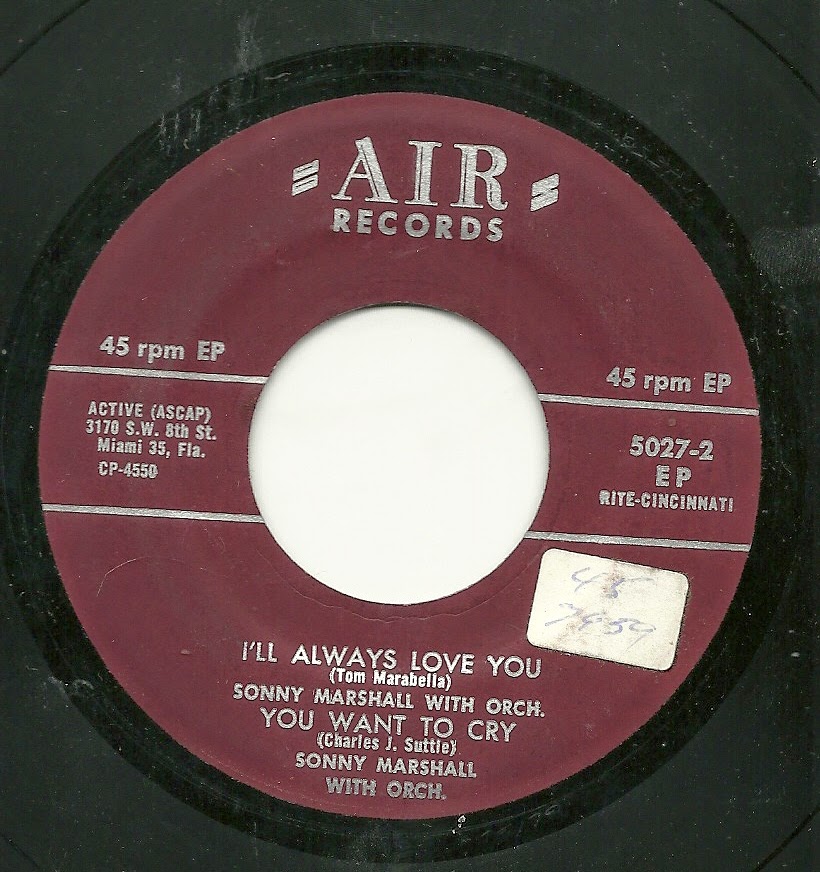 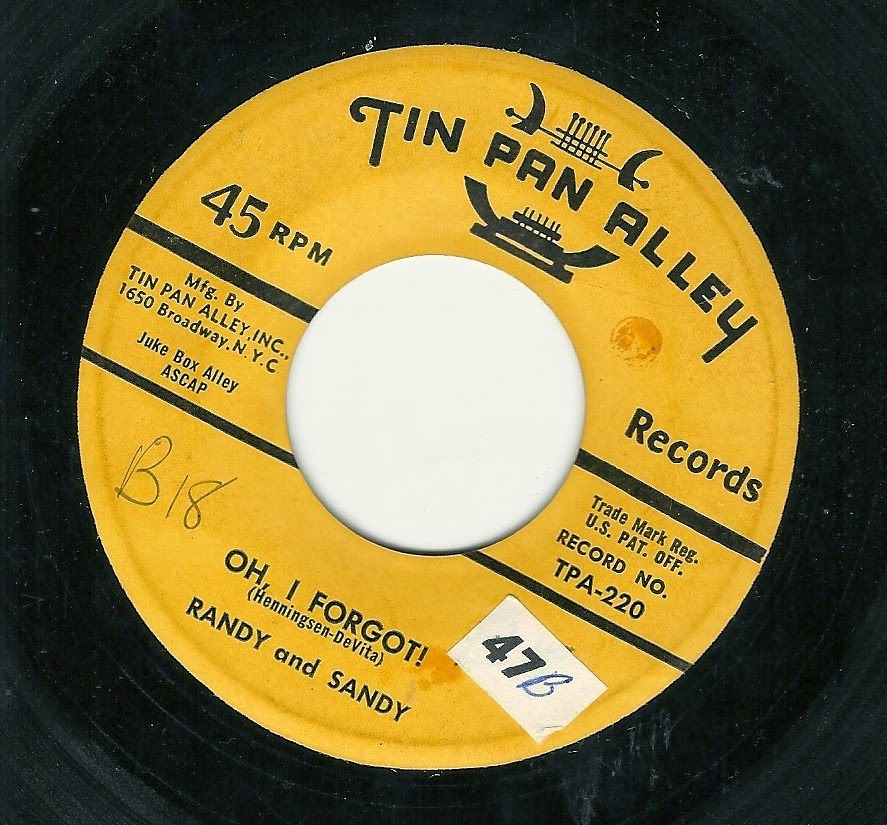 I was tempted to think that today's record, "Oh, I Forgot" by Randy and Sandy, might have been one of those rare Tin Pan Alley sides, all but gone by this point in the late '50's, which might have been intended for the legitimate world of charts and pop hitdom. In it, I hear a strong enough song, with a clever lyrical hook (to me, at least, genuinely funny),  and performed by the sort of male duo which were in vogue at that moment (1958-59).

But then there's that co-writer credit to "DeVito", a person who - whoever he was - turns up on a few dozen TPA records around this time (as frequently as (the overall more common) "Covais" for a short time. It would appear that "DeVito" was, at least for a year or so, part of the composing staff who would set the lyrics to a tune, rather than just happening to be part of more than 18 songwriting teams within a year. The presence of that name on the label, to me, is the killer blow saying that this is just another song-poem record, albeit a very catchy, funny and enjoyable one.

While I said I was tempted to think that "Oh, I Forgot!" was an attempt at a legitimate hit, I'm honestly not tempted to think about the flip side "A Little Bit of Love", at all. Although again credited to Randy and Sandy, it sounds to me that only one of the pair is audible on this side.


Download: Randy and Sandy - A Little Bit of Love
Play: 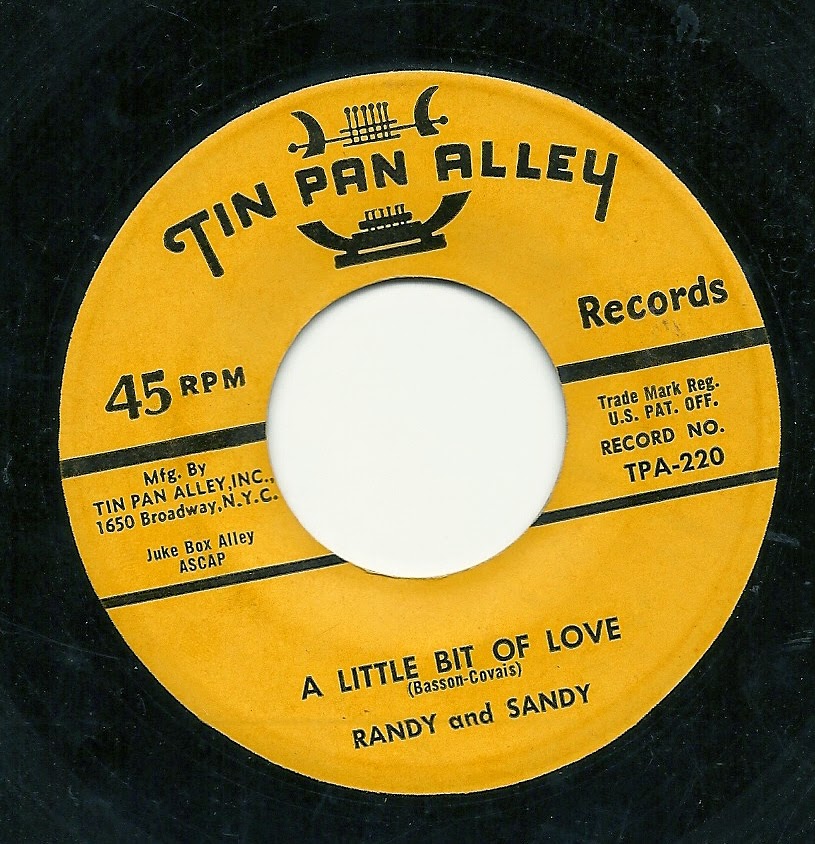