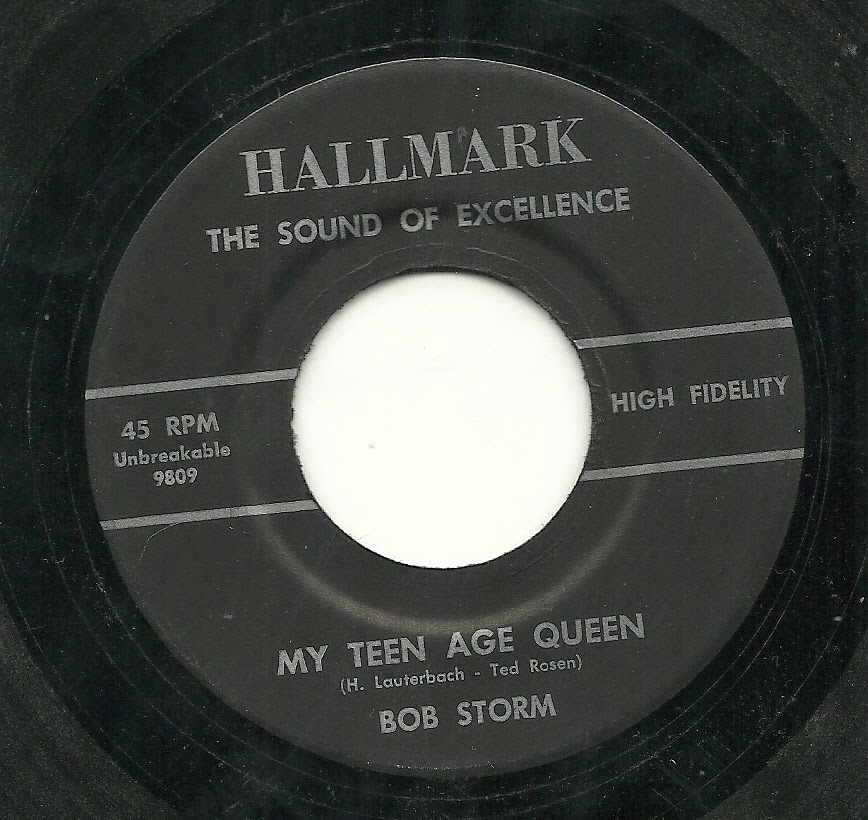 On those rare occasions when a new Bob Storm record makes itself available to me, I make every effort to be first in line to buy it. My hope against hope is that the resulting record will not only actually feature Bob Storm (and Halmark - or in this case "Hallmark" - records bearing that name aren't always actually Bob Storm records - some are even women!), but that it will also feature Mr. Storm in his ultra-unctuous singing mode.

After listening to tons of Bob Storm records, and debating those that seem questionable with other collectors, it seems likely to me that ol' BS had at least two or three styles he could switch on and off, ranging from Standard Big Band Belter to that otherworldly, Robert Goulet on steroids voice I love so much.

So, even though I might not have said so in the past, I do think that the Big Band style vocalist on "My Teen Age Queen" is Bob Storm. That leads to a bit of disappointment, but this is more than made up for by the fact that here we have a vocalist who sounds at least 40 years old paying tribute to his teen sweetheart. That, to me, would have benefited from the more over-the-top Storm vocal style, but this one will do.

It's also worth mentioning that although this backing track is right in Halmark's wheelhouse, I don't remember hearing it on any of their records.

On the flip side, "Only Because I Love You", we have a more intermediate step in the Bob Storm stairway to Unctuosity. He never quite steps into the abyss of that wonderful ridiculousness, but it's still fun to hear him emote over the canned music behind him.

On a side note, it's interesting to me that these two songs barely reach 4 1/2 minutes together, a real rarity for Hallmark/Halmark records, which tend to reach or pass the 3 minute mark on most sides.

Download: Bob Storm - Only Because I Love You
Play: 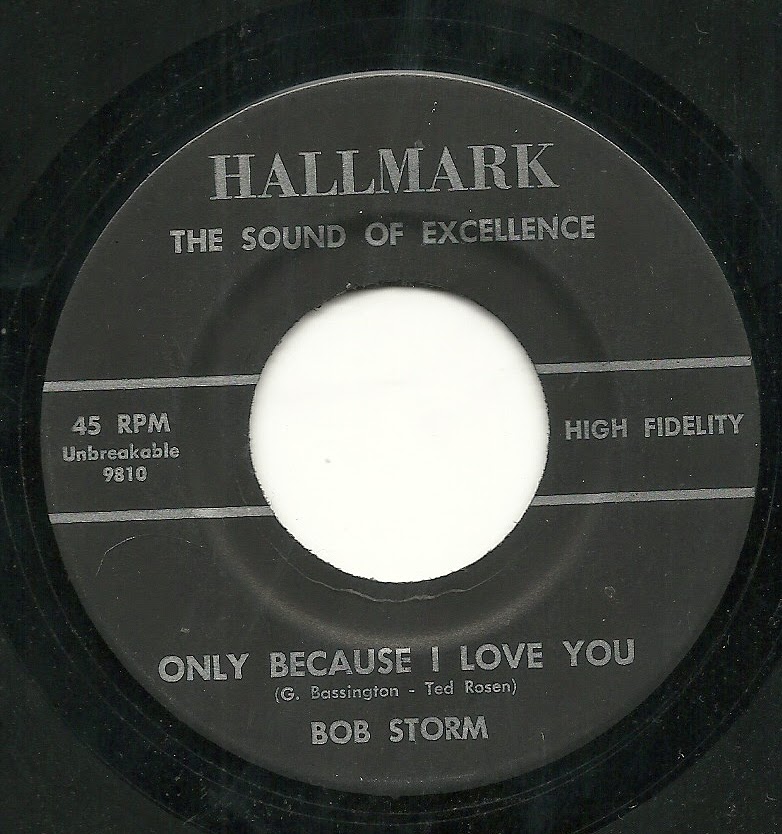 The Sea and The Mountain

First, I want to address a question I got from an anonymous poster last week, who asked where I get my replacement phonograph needles. I get mine from http://www.lptunes.com/. I had to enter the brand name and item number of my turntable, I think - it's been awhile since I used them for the first time. 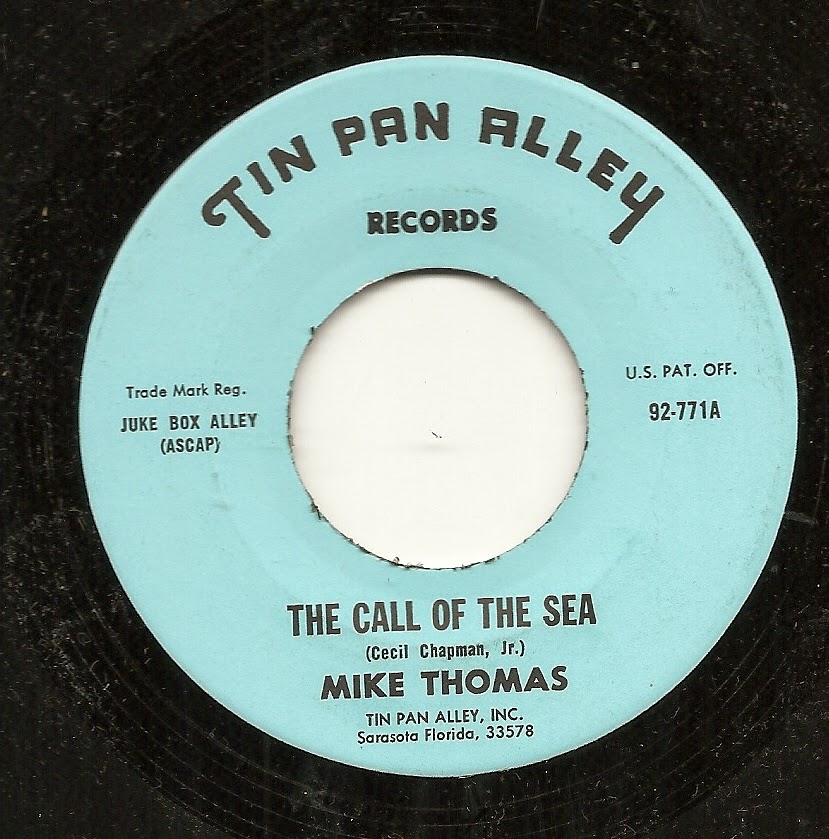 Much more often than not, when I've shared a mid-period Tin Pan Alley record - whoever the singer, but often Mike Thomas - my comments have been dismissive or satiric. And I think in having a listen to the attached songs, many would find those comments well deserved.

But here we have one with many of the drawbacks of other TPA records of the era - limited lyrics, limited instrumentation, somewhat limited musicianship, perhaps not the best choice of musical setting for the lyrics - and yet, I kind of dig it. The DIY sound here works a bit better than usual, Mike Thomas stays on pitch and seems more suited for this particular material than I can remember on any of his other discs.

I do think a more dramatic setting might have worked better about a song which pays tribute to those who died at sea, and also serves as a warning to those who feel "The Call of the Sea", and yet.... this is sort of enjoyable...

Download: Mike Thomas - The Call of the Sea
Play:

The flip side, "High on the Mountain" strikes me as pretty much a throwaway - it's 87 seconds long! It has some of the same qualities of "Sea", but nothing to distinguish it, or to make me want to hear it again. 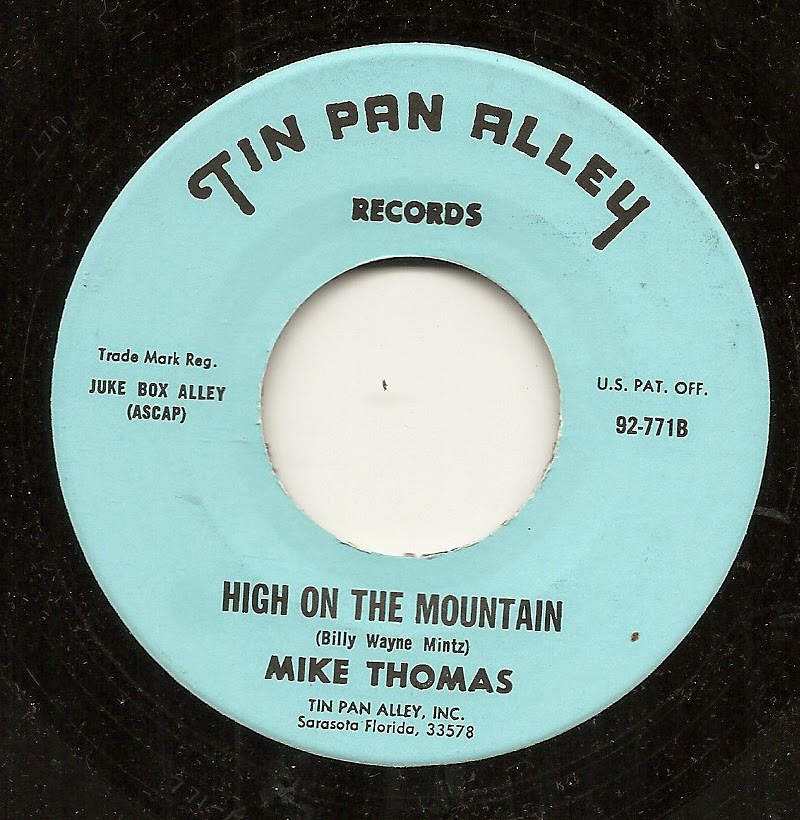 Well, so much for the plan to fill up the site with posts every five days until I was caught up. Days after making the sound files for the last two posts, my needle gave up the ghost, and as I order new ones online these days, I had to wait a week for a new one.

But I think I've got something to make up for that delay, in one of the weirdest song-poem pairings you're likely to come across. ﻿ 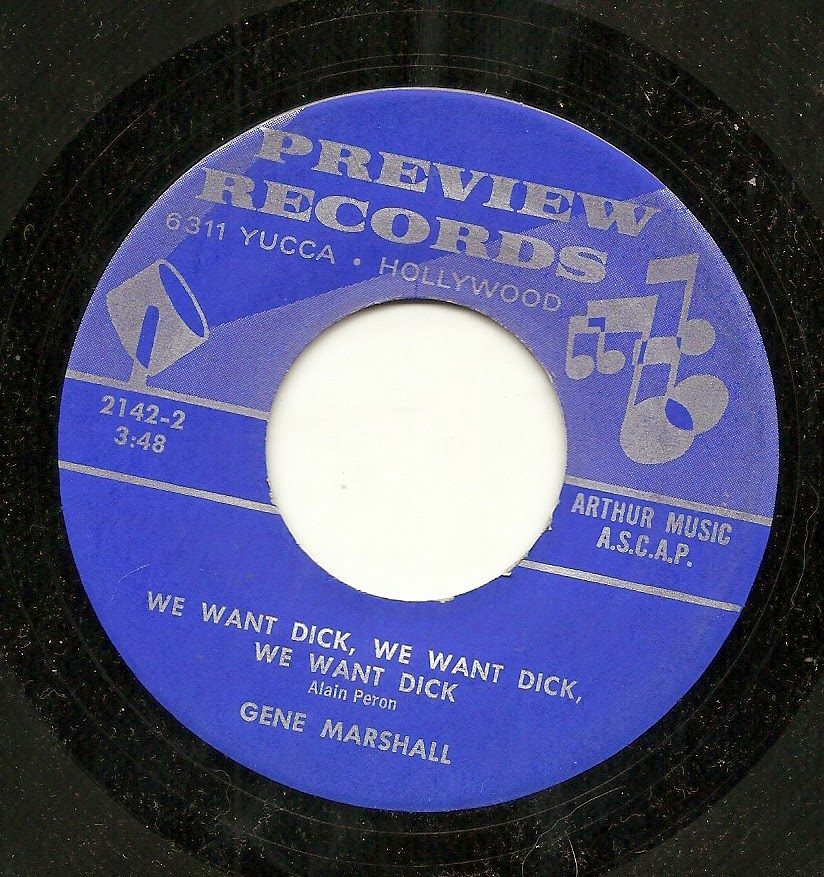 I first saw these titles several years ago on the AS/PMA Preview page, but never thought I'd actually get a chance to hear them. Glory be, though, a copy came up for sale in a Buy It Now on eBay, and I snapped it up! Here we have someone named Alain Peron, offering up some thoroughly misguided (and limited) lyrics supporting the GOP ticket of Richard Nixon and Spiro Agnew.

On both sides of the record, the limited lyrics are padded out to nearly four minutes by lengthy instrumental sections. Note that the singing on side one ("We Want Dick, We Want Dick, We Want Dick") doesn't start until 70 seconds into the record, and ends (aside from some chanting) more than two minutes before the record ends. And doesn't the crowd at 2:20 sound enthused? That's all I'll say, I think - I'll let you discover the wonders of this record on your own.

The Preview page has some contradictory information regarding when various records appear to have been released, but based on this label number, it appears much more likely that this record was put together for the 1972 campaign, rather than the 1968 campaign.

Again, the lyrics here are the main show, and I encourage you to discover them on your own, with one exception that I will share, because it just makes me laugh out loud - has anyone actually ever referred to politicians in this way: "a Repub instead of a Demo?" 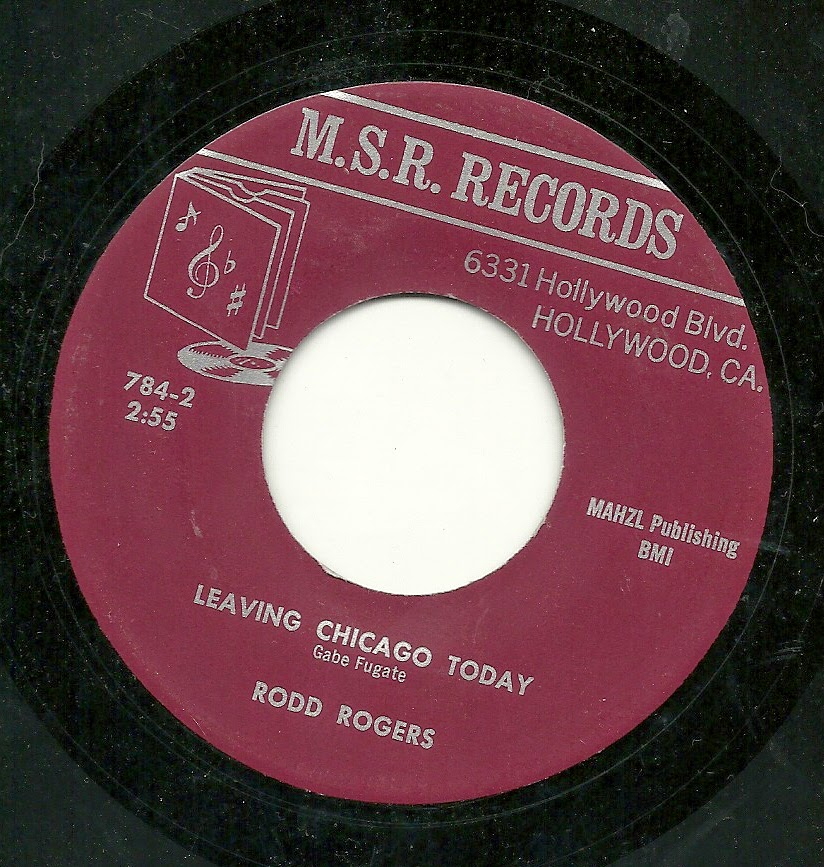 Today's feature is shared more for an interesting side note about it than for any particularly high quality in terms of song, arrangement or performance. I actually find the song dull, the pressing of the vinyl abysmal, and the arrangement and performance absolutely pedestrian.

But that's sort of the point. Those reading this site are probably at least vaguely aware of Rodd Keith's decline during 1973-74, as detailed in booklets to various CD releases, ending in his death shortly before the end of 1974. It looks very much to me as if this record was one of the final releases that came out under any of Rodd's myriad names during his lifetime.

Admittedly, some of this is conjecture. But while the song-poem website is woefully incomplete, it does appear that there were VERY few records by Rodd Rogers (the name he used at the label at that time) after release number 784, heard below, "Leaving Chicago Today". And aside from one or two later releases, the others seem to be "vault" releases, if MSR did such a thing, one being a song pulled from the "Variety Songs for 1969" album, apparently well after that album's release, and one being released at least two years after Rodd's death.

I'm guessing I'm right, but whatever the cause, "Leaving Chicago Today" is just about the most lackluster performance I've ever heard from Rod/Rodd Keith/Rogers, and a cookie cutter arrangement which is just about the antithesis of what he had typically offered up, with none of the hallmarks of his style or abilities. my thought is that if you played some of Rodd's mid-'60's highlights from Film City and Preview for a neophyte, then played this one, the listener would likely say "what the hell happened to the guy?".

About the flip side, "I'm Talking to Myself", I could easily say most of the same things. This record sounds to me like someone's truly bad attempt to tap into a sound and style which was popular on the charts around the early '70's - attempts which fail miserably, in part at least because of what sounds like the disinterest of everyone involved. 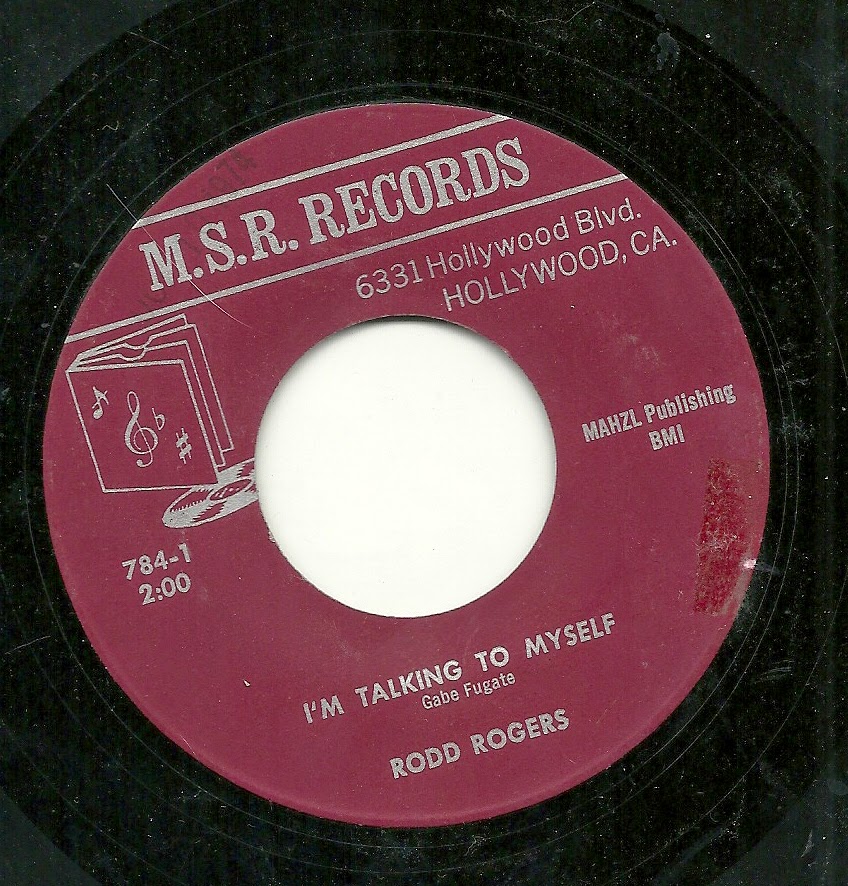 If anyone out there has more insight into Rodd's life and times, and the likely release date of this record, by all means, let me know, and if I'm offbase, I'll update accordingly.
Posted by Bob Purse at 1:07 PM 4 comments: