I have always tried to avoid posting records which have also been posted on other blogs or elsewhere, but today, I'm making an exception, first because this is such an extraordinary one-sided record (a copy of which I only recently obtained - and I couldn't be more pleased!) and second, because the download at the only other posting is no longer available, due to the same divshare meltdown that too most of my earlier posts. The poster was Darryl Bullock, he of the masterful "World's Worst Records" blog, which is linked, to the right, and the post in question, which you can find here, has far more detail than I could hope to have put together. The post is there, the track is not.

For those who didn't just click on that link, this is a holy grail for lovers of the Halmark label. For here we have the sales pitch, complete with a performance by Bob Storm over what may well be a canned backing track, for the lugubrious product that Ted Rosen at Halmark. The sales pitch is remarkable in its ridiculousness, and goes a long way to explaining how anyone would have been satisfied in the typical overwrought, often unbearably unctuous performances that came out of Halmark - they were submitted by people who thought this record was good.

And I really encourage you to read the much more detailed and researched post by Darryl Bullock, linked above.

And hey, look - the owner really loved and played this record - it's got one of those plastic doo-hickeys in it to fit it to the spindle!: 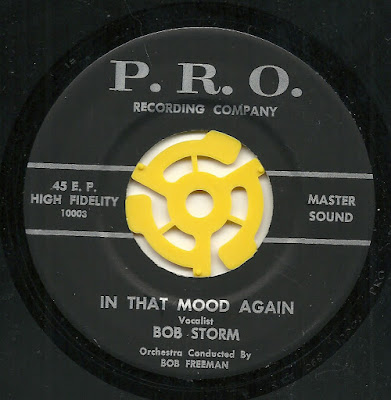 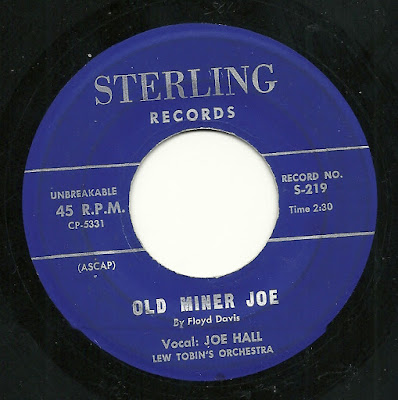 I have very recently picked up two records - the first two in my collection - by song-poem singer Joe Hall. His name dominates the earliest known releases on the Sterling label - a favorite of mine - and then disappears, never to appear again, around the time that Norm Burns shows up, with barely a dozen known releases to his name. So I thought I'd share this previously rather unknown﻿ warbler with all of you. To me, he sounds more than a bit like the latter day Film City singer, Jimmie Jones.
But there I go, burying the lead, all for the chance to put a joking reference in the title of my post. Because the real news here is that we have yet another "song-poet" who made minor changes to an existing song, and presented the results as his own. Granted, this is not the wholesale theft of "Nobody's Child", which was submitted to a song-poem company without one word changed, or even "Watching Scotty Grow", which was submitted to another company with the name of the child changed. (Those examples will be able to be found elsewhere in this blog if I ever find the time to fix the older posts.)
Because there are lyrical changes here. But a simple reading of the words to "Old Black Joe", and a listen to Floyd Davis' "Old Miner Joe" will show those changes to be largely cosmetic. I really have to wonder if Mr. Davis proudly played this record for his friends and said "listen to the song I wrote!", and if so, if anyone pointed out that Stephen Foster wrote nearly the same song more than a century earlier.
Have a listen!
Download: Joe Hall, Lew Tobin's Orchestra: Old Miner Joe
Play:
The flip side, featuring the truly unwieldy title "In the Garden of Home Sweet Home", is as clunky a song as its title suggests it will be. Not much here to make the song entertaining...
Download: Joe Hall, Lew Tobin's Orchestra: In the Garden of Home Sweet Home
Play: 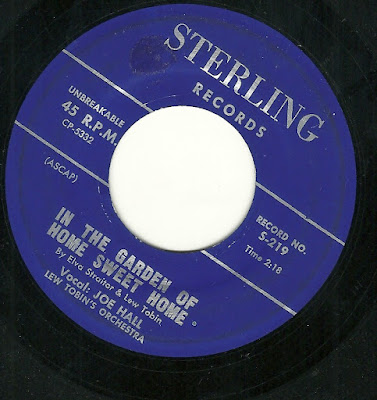 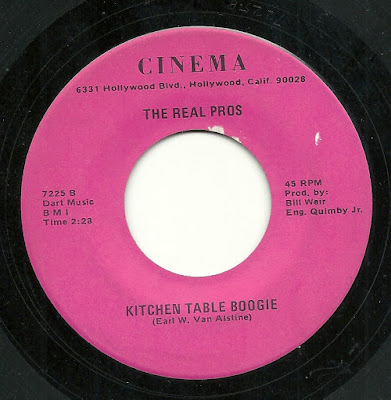 Well, problems getting Opendrive to accept my uploads, and some truly busy job and home requirements have  left me nearly a week behind. Hopefully, today's offering makes up for the delay.

As I've documented several times, Prior to mid-1972, the Cinema label's releases (always labeled as having been performed by "The Real Pros") usually featured a  one-man-band operation, and then, during 1972, the label slowly transitioned over to the MSR gang (which would soon take over the label's product almost entirely).  And I've also probably made it clear that my tastes run to the former over the latter by a wide margin. So it is that I have another one of those early Cinema releases today, albeit one with a significant difference from the others I've shared.

On the side of the record featuring the remarkable and ridiculous "Kitchen Table Boogie", we have the early Cinema label vocalist I've come to know and love, and he's got a doozy for us. Here we have another lyricist who seemingly grabbed any word that rhymed with the end of the previous line, then created a line that could end with that rhyming word. Man, Combine that with a wah-wah styled keyboard setting, a swinging beat, and some wild soloing at the end, and it's a complete packing. In Fact, That's Country Style!

The difference comes up with the rather bland flip side, a song with the clunky title "Wondering Memories". Here we still have the same home-organ console, played very likely by the same person who is on most or all of the other Real Pros records from this period. But the singer in this case is a woman, a vocalist I don't recognize, and who does not have much vocal personality (or talent). Perhaps I've heard others from this label/era with this or another female vocalist (perhaps I've even shared one), but if so, I don't remember it. The song is very forgettable, the only thing that stands out me being this exceptionally poorly written couplet: "More Heartbreak Could Be Fatal / Especially For Me". 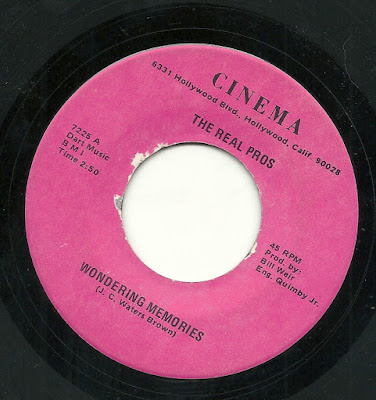