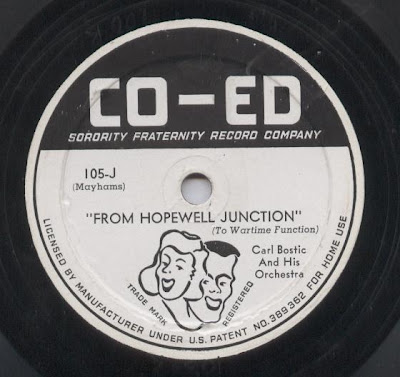 Although I just featured a Norridge Mayhams single a few weeks ago, I'm returning to that well again today, because I've just obtained one of the earliest known Mayhams Co-Ed label singles. The AS/PMA site puts the date on this one at "1945?", and given the lyrics, it certainly seems to date from some time during WWII. It's also the second lowest number of the listed Co-Ed singles (most of which pre-date his Mayhams label records), meaning it is likely among his earliest self-released records. He made earlier records with the Blue Chips (and wondrous many of those are), but they were released on established labels.

I find the Mayhams story (what little I know of it) and his records endlessly fascinating. Today's feature carries the amazing name "The Hopewell Junction (To Wartime Function)" Those of you who have heard Mayhams later 78 - one with an far more amazing name - "Yamtang Yamtang Rankytang (No Meat Sweet Potato Swing", might notice a subtle similarity between the melody to the chorus and bridge of that record with the same sections of this record. For those of you not lucky enough to have heard "Yamtang...", here's a hint - the tunes to those sections of both songs are virtually identical. Please excuse the surface noise as you enjoy Carl Bostic and his Orchestra:

On the flip side is a real rarity on Mayhams' records - a song not written by the maestro himself. This song, "Married Man Blues", performed by "The Ministers of Melody", carries a writers credit to someone named "Lowe": 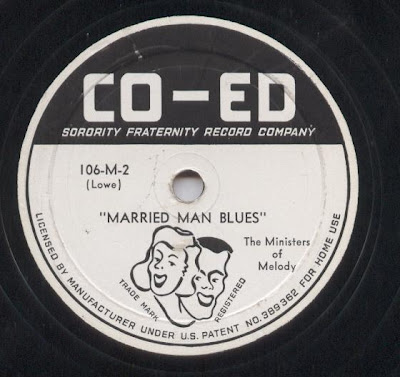 Email ThisBlogThis!Share to TwitterShare to FacebookShare to Pinterest
Labels: Co-Ed, Norris the Troubadour, Song Poem of the Week

A Late One From Rodd 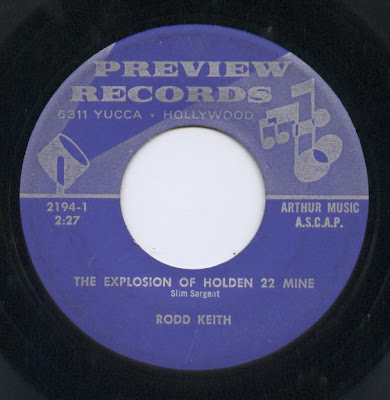 Today's offering appears to be among the final records made by Rodd Keith for Preview, at least based on the available evidence. As my friend Stu points out, the label number for this one is within 100 numbers of the highest one found in the song poem database.

And this is a pretty interesting one, at that, capturing in ballad style, the true story of a mining disaster. The details of this event can be found on this website, which (aside from being fairly difficult to read - at least on my browser) is quite fascinating.

Here's "The Explosion of Holden 22 Mine":

The B-Side, "Blue Baby" is more of a standard issue Rodd Keith record, although it's still fairly catchy, and features a soulful vocal, and a particularly great vocal finale. 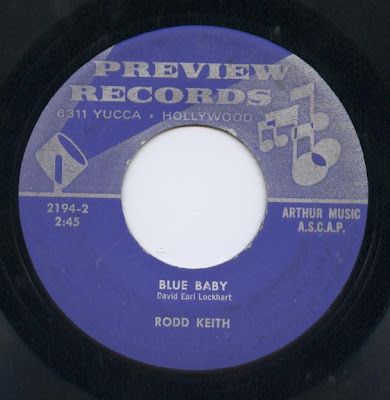 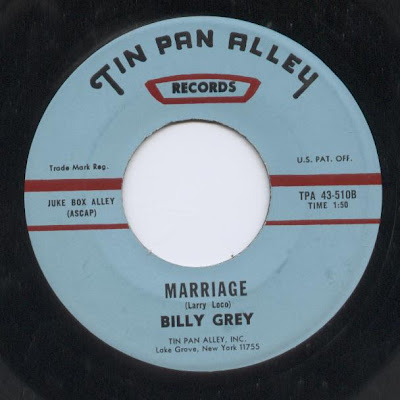 It's Tin Pan Alley Blowout Day here at the home of Song Poem of the Week, with six for the price of two. And the usual two are free!

Was there any other song-poem label which displayed more variety during its years of operation than Tin Pan Alley? From 1950's efforts in doo-wop, they moved into the sounds of the day, taking stabs at calypso, topical song, novelty pop, and 1960's pop, among many other genre's, and plenty of hard to define releases.

Beyond that, Tin Pan Alley records' lyrics can be among the weirdest I've found on song-poem records. Here, in chronological order, are three supremely odd releases. First up, an almost comical pairing of marital complaints, both from the pen of the perfectly named Larry Loco. First up, Billy Grey offers up Mr. Loco's views of Marriage, from the male perspective.

Then, on the flip side, Eleanor Shaw presents Larry's conception of the complaints of a woman, not only about her marraige, but about all men. The sound quality here is terrible, by the way, but the words more than make up for it. 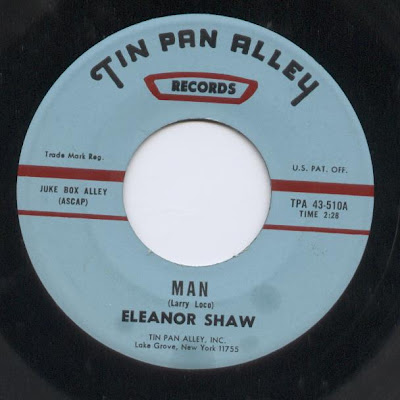 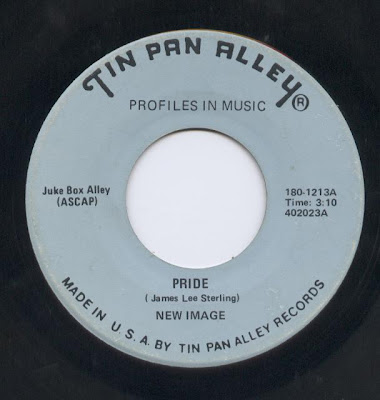 Moving up several years now: Near the end of their days as a label, Tin Pan Alley stopped identifying the performers by name, and started slapping a couple of group names on their labels. The last four songs are by "New Image".

First up is "Pride", with the lyrics shoehorned - no, pistol-whipped - into a rockin' backing track. I've listened to this nearly a half-dozen times, and have no idea what the hell she's singing about.


No such problems with the flip side, "A Girl and a Guy in Love", the problems here, instead, being the sheer banality of the lyrics (have there ever been worse or more obvious rhymes than those featured in this record?), and the barely in tune vocal. 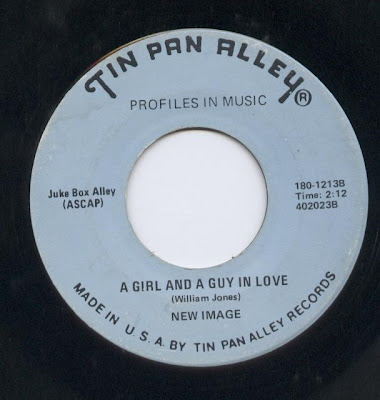 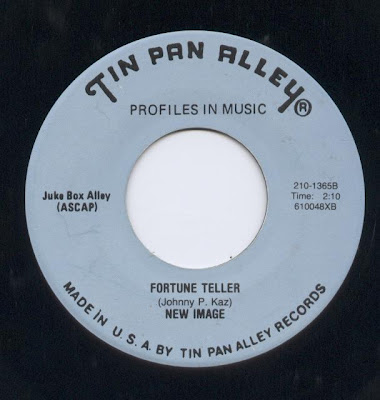 Leaving the best for last, here's one of the highest numbers I've ever seen on a TPA record - meaning it is among their last releases. Beyond that, it's easily one of the most unhinged things I've heard on a TPA record (on both sides) - in both cases, my first thought, again, was "what the hell???". But I think I'll let both sides speak for themselves. Here's "Fortune Teller":

And perhaps my favorite of the six, this little slice of Steppenwolf wannabe rock, "Lady Wildcat". 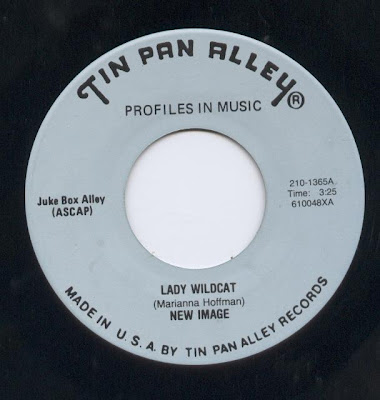 A Song For Jackie 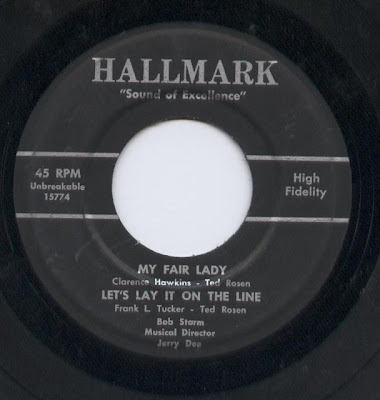 It's EP day here! And what better kind of EP to share than a Halmark EP, or, in this case, a "Hallmark" EP. For their "Hallmark" releases, the label actually went so far as to bother to name the singers on the tracks, something they rarely did on the more common "Halmark" series. This EP is by Bob Storm.

As a special request to a blog correspondent, and in honor of the upcoming 46th anniversary of the death of JFK, here's a very vaguely written tribute to Jackie Kennedy, one which has always been a favorite of mine, "My Fair Lady".

It's worth noting that, like most of the Halmark records in circulation, this record came out some time in the 1970's, meaning that not only is it completely out of time with the pop music of the day, but that the song-poet waited about a decade to submit his Kennedy tribute to the song-poem mill, which would have meant that any audience the song might have had, had no doubt lost interest at least a half-dozen years earlier.

However, this is one Halmark (or Hallmark) record in which the song, as written, actually seems to go very well with the backing selected, rather than having been shoehorned in.

The second song on the EP was part of the AS/PMA download page for years, and no doubt circulates among collectors. However, it is one of the most amazing lyrics to be heard among song-poems, and an equally amazing match of lyric and singers (although it was written by a male, which surprises me), and perhaps there are those out there who have never heard it. Also, this version of the MP3 should be in significantly higher quality than the one which circulates. Perhaps one of you can make sense to the lyrics of "Let's Lay it On the Line".

Incidentally, if there's something any reader out there is looking for, or a genre, subject matter or label you'd like to see represented here, please don't hesitate to let me know, via a comment on this or any other posting.

Anyway, the songs on the flip side, "Michigan Baby" and "Ageless Love", don't hold the same fascination for me, but perhaps they will connect with you a bit more. 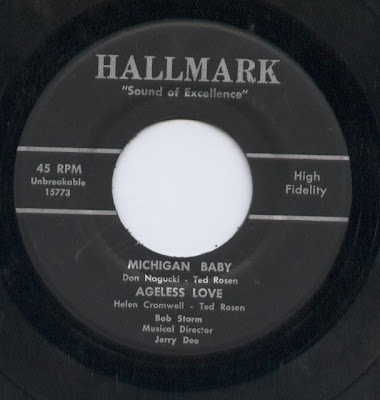 The Songs They Play Are On Vellez! 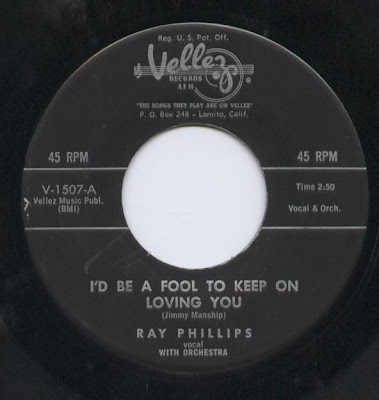 From what was undoubtably a tiny label, Vellez, comes an irresistable bit of hillybilly rock song-poemetry. The label slogan - "The Songs They Play Are on Vellez" - seems exceptionally unlikely, as much as I wish it had been the case.

There's a lot to love in "I'd Be a Fool to Keep On Loving You", from the start stop arrangement, to Ray Phillips' vocal, to the sound of the band, to the name of the author, the fantastically named Jimmy Manship. This sounds a bit like something Country Dick Montana of the Beat Farmers might have done, if he'd been around in the '50's. I am particularly fond of the no-doubt unintended noise captured right at the end of the song, after the last drum beat.

The flip side, "Our Tomorrow Ended Today", has charms of its own. I noticed in passing that the sound of the band, particularly the pianist, reminded me of the record I recently posted by The Allison Sisters (on the Blue Hen Label). I was amazed, then, when I went to see if this record was listed at the American Song-Poem Archives, and found that the very next record released by Vellez, in sequence after this one, was by the Allison sisters! While that Blue Hen Allison record contained originals, the Vellez record by the Allisons contained what are likely song-poems, as one of them was written by - you guessed it - Jimmy Manship. I wonder if "Strong Chords of Love", on Blue Hen, was recorded at the same sessions as this record and the Allisons' Vellez single. 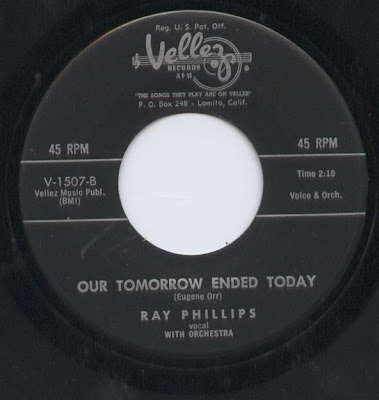 As a bonus, here's a link to my post today at WFMU's blog, which is of another, far more ridiculous song-poem.
Posted by Bob Purse at 6:31 PM 1 comment: