And Mike Thomas As the "Young Girl"! 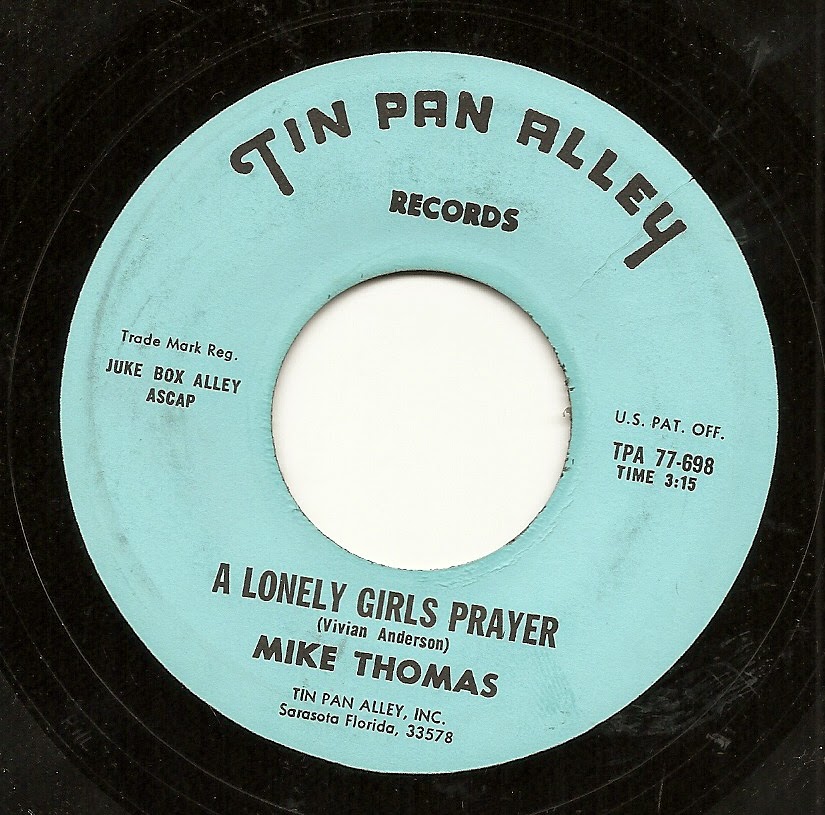 The setting: A drab office outside a tiny recording studio, some time in the late '60's or early '70's:

Charlie: So, uh, we got this thing here called "Lonely Girl's Prayer". Who are we gonna get to sing it? We don't have any girls to sing it.

Bill: Right now, we don't have anyone but Mike﻿ Thomas to sing anything!

Charlie: Well, Mike sort of sounds like a girl when he sings... sometimes. I guess that'll be okay. But whose name do we put on the label?

Bill: Mike Thomas. Duh. Really...who is going to care? The writer? She'll just be happy to get a little piece of plastic with her song on it.

(...Later...)
Charlie: Ya know, this lyric is full of concerns and worries, and the whole thing is sort of a prayer for the country. Are you sure this bouncy backing Joey wrote for it fits?

Bill: Who is going to care? The writer? She'll just be happy to get a little piece of plastic with her song on it.
Bill: Oh, okay, I'll tell Joey and the band to add a drum and bass player add an intro that quotes from some patriotic tune.

(...Later...)
Charlie: Um, this thing's tune is all over the place - I don't know how Mike does it sometimes - I wouldn't pay for this. And the damn thing is barely 100 seconds long.

Bill: Charlie, maybe you're in the wrong business. All the writer is going to care about is getting a little piece of plastic with her song on it. But if you want, I'll have them write that the song is over three minutes long.
Bill: Hey, does "Girls" have an apostrophe or not?

Regarding the flip side, I am not familiar enough with the book of Corinthians to know what the hell Mike Thomas and his writer are going on about in this otherwise rather bland offering. If anyone cares to enlighten the rest of us, please do. 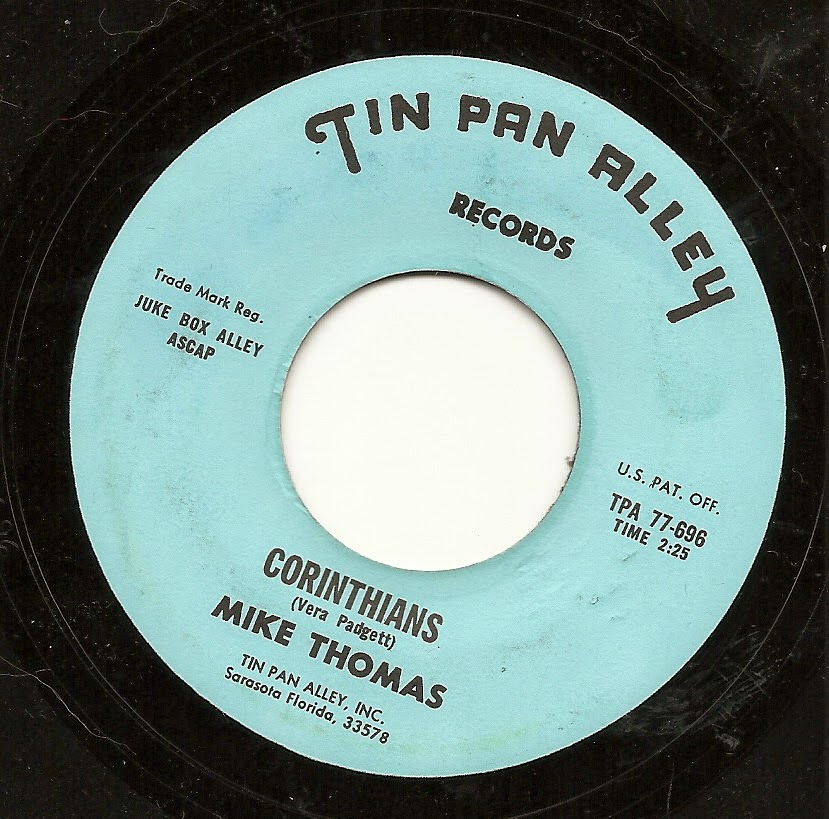 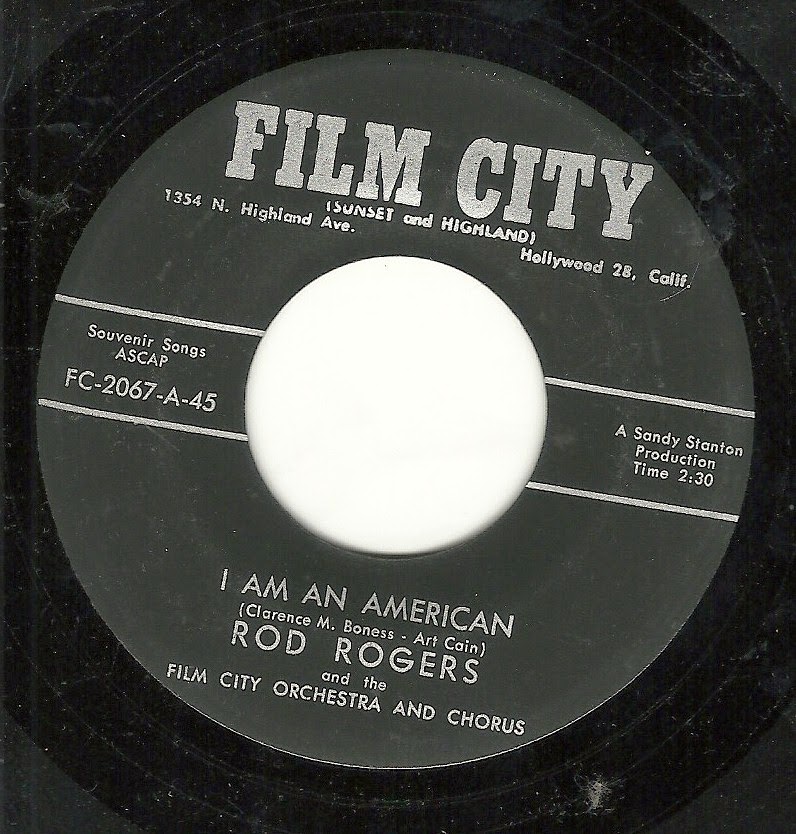 Nearly four years ago, in this post, I offered up both sides of a Film City 45 written by Clarence Boness, both songs featuring patriotic themes. Today, two equally patriotic numbers, from a subsequent Film City release, again featuring Rod Rogers and the Film City Orchestra, although the label in this case also credits "and chorus". If anyone out there can hear the chorus, please let me know, as they don't appear to exist. But then again, neither does the orchestra. Mr. Boness actually co wrote this one with Art-Cain, and Rod declined to take a writing credit, although he did so on the flip side. This is a bouncy, marching song, complete with faux glockenspiel solo!

Download: Rod Rogers and the Film City Orchestra and Chorus: I Am An American
Play:

On the flip side is Mr. Boness' offering up in that most stereotypical subjects of song-poems, and indeed, in the world of popular song for the last 50 years, the NORAD system. While this can't compete with such classics as "Crystal Blue NORAD", "The Ballad of John and NORAD",  "NORAD Got to Be Free" or "I Think I Love NORAD", it's surely still in the top ten NORAD hits of the '60's and '70's. And I think that maybe last note is among the highest I've ever heard Rod Rogers/Rodd Keith sing. 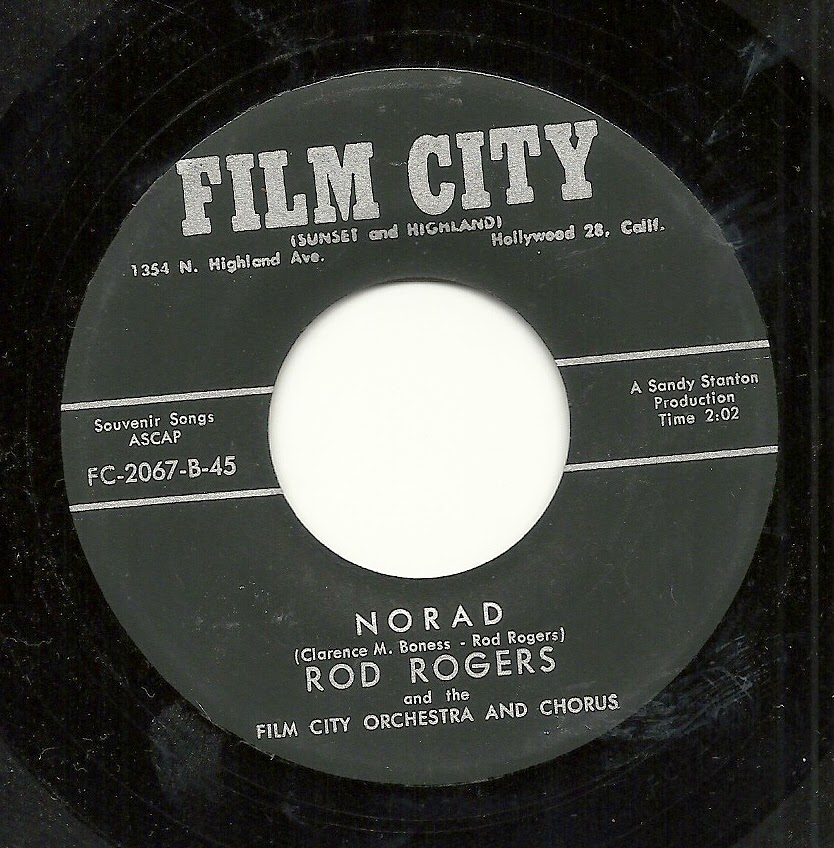 Divshare is back, to a degree. The official announcements from the company include the news that most files uploaded before March of this year are lost forever. Supposedly, some were retrieved for some users, but I can't find any of mind that work.

This will require me to upload everything I've ever shared on the site, and rebuild every post, whether I choose to stay with Divshare or not. For the time being, no posts which are more than a month old (as of today) will work. I will try to provide updates as I work on this problem.

Thanks for your patience, 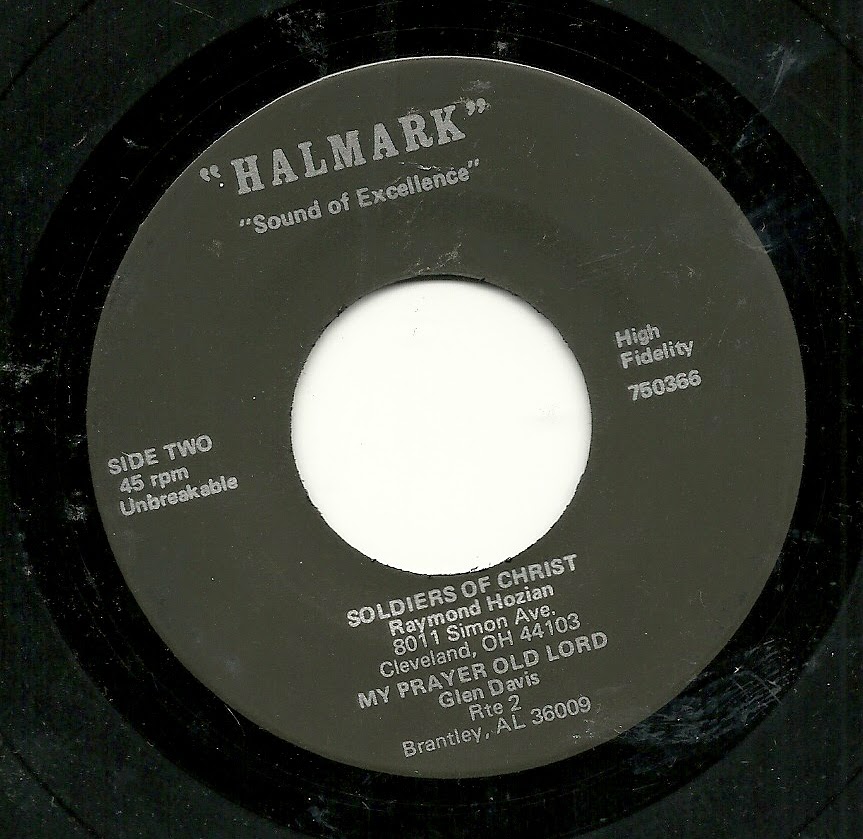 If it's not already a tradition to offer up a Halmark 45 on or near Easter, 1.) it should be, and 2.) it will be soon. What other label so often offered up flowery language devoted to all things Jesus?

First up on today's record is some typically stultifying Halmark mustiness, titled "Soldiers of Christ

Variations on a theme follow, even staying (as would a classical Mass) in the same key as the first song. I'm willing to bet that the title was supposed to be "My Prayer Oh Lord", but I've saved the track here under the title listed on the label, which is "My Prayer Old Lord". I hope the Lord isn't offended in being addressed so familiarly and casually.

On to more secular matters, although STILL in the same key. The first line of "My Nancy" is the exceptionally un-promising and non-musical phrase:

Having grown up near Chicago, and having lived in the area my whole life, the image I came up with was the famous Rosehill Cemetery. However, it turns out that there is town called Rose Hill, Va., just 15 miles from the town where this particular song-poet lived. Even so, and even though the lyrics refer to Nancy in the present tense, there is some quality in the lyrics that suggest to me that she's may not be coming back.

The most remarkable track here, however, has to be "Stolen Wedding Band". Not content to have a spoken section within the song, over the much used backing-track, in this case, the singer actually offers up 65 seconds of a Capella prose, spoken before the music even starts. As to the rest of this wronged woman ballad, I'll let you discover its charms for yourself, and wish you a happier Easter than this woman was experiencing.