Looking Back with Rodd Keith

Howdy, everyone, and a very happy (upcoming or otherwise) New Year to you and yours!

First up, another update as to "fixed" posts. We're all the way back to April of 2014 now - only five and a half YEARS of song-poem posts until everything is fixed! Today's repairs went to a particularly ridiculous Norridge Mayhams release, a very early MSR release featuring Bobbi Blake (under another name) and Dick Kent, and a pair of linked songs sung by Norm Burns. The other post from April of 2014 was actually repaired in June of this year, because it had a direct tie in to one of my posts at that time.

I found a Rodd Keith record that I really enjoy, and intended to make it today's feature, before I realized that the flip side (also a great performance) had already been released commercially on one of the song-poem re-issues. And I didn't want to end the year by just sharing one song, nor did I want to simply offer up a performance that some percentage of the readers of this site already have.

So I'm still sharing the song I just mentioned, but I'm also going to add a second Rodd Keith single, in order to get at least two (actually three) songs that most of you have never heard, while also including that more easily available song. 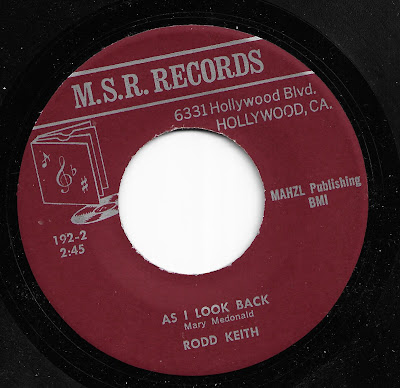 The record in question comes from the earliest days of rhe MSR label, the only period at that label that I enjoy with any consistency. And this is a fairly wonderful ballad by Rodd Keith, a soul-pop marvel, with a tasty arrangement, an emotion-laden vocal and some truly otherworldly drumming. I've said this before about certain song-poems, and it applies here, I can get lost into almost a dream state listening to what this drummer is doing. I wish I knew who it was.

This is a compelling record - everything is right where it ought to be - a really warm, inviting sound. I could listen to this record a bunch of times before I needed to hear anything else.

And what better to share on the next to last day of the year, but a song about "looking back"?

The flip side is "Ship For Home" as mentioned, has been comped, and it can be heard on the Rodd Keith release "Saucers in the Sky", which I encouarge any song-poem fan to purchase. It ends the album, which is not surprising, because I'm not sure what could follow up this record, particularly the last 30 seconds or so.

Starting with a big, thick Chamberlin sound, and again, some more killer drumming, and another warm, inviting arrangement, this is another great one. The soulful arrangement is among Rodd's best, too. Both sides of this record make me wish - as so many other have - that Rodd Keith would have, at some point, gotten the chance to make real attempts at hits with a real budget. 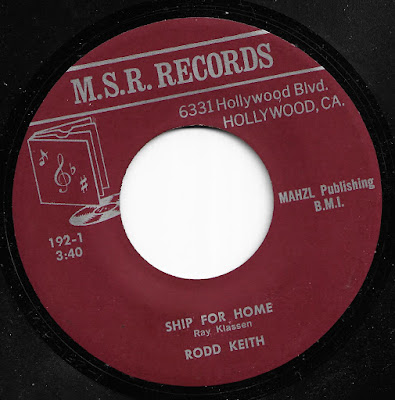 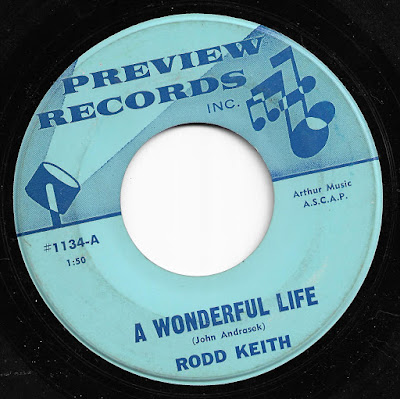 As promised, now I have another, much simpler, earlier Rodd Keith offering, from relatively early on in his days at Preview - some time in mid 1966 seems to be about right.  "A Wonderful Life" features supper-club Rodd, offering up a rather unctuous vocal style, wrapped around some lyrics which are less than stellar - perhaps even sappy - but certainly heart-felt, and which tell a love story in about 105 seconds.

Equally heartfelt, but upping the sappy quotient (not helped at all by the awful alto sax solo) quite a bit is the flip side "The Baby Brother of Mine". I find myself wondering, however, why - if the brother was still a child and found himself without shoes - the narrator didn't get him some damn shoes.

Download: Rodd Keith - That Baby Brother of Mine
Play: 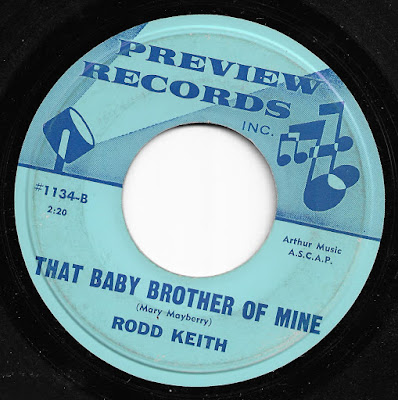 First off, I want to wish everyone reading this the finest and happiest of holiday seasons! Please scroll all the way down, before you leave, to see my family's unique Christmas card.

Second, I have fixed yet another month of previously "lost" posts, in this case, three posts (featuring seven songs) from May of 2014. This includes a set of four songs on a Halmark EP, including some truly blatant plagiarism, a single by a particularly hard-to-find vocalist (if that's the right word), on an equally obscure label, and a typically lovely set of tunes by Cara Stewart. 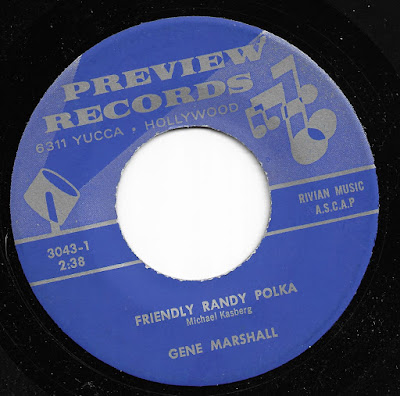 I listened to this 45, as I usually do, after only a short glance. I noted the weird title - "Friendly Randy Polka", and the almost equally weird title on the flip side (see below), and knew it was a Gene Marshall record, because it was from a stack of 17 Gene Marshall records that I'd just bought at a low-low price. But I listened to it without bothering to note the name of the song-poet, which is typical.

Once I heard the lyrics, featuring some tortured syntax, a couple of deliberately jokey lines and the generally "off" feeling they projected, it was all I could do to not stop the record and look to see who wrote the dang thing. I let it play through, and was delighted - and not at all surprised - to see that it was Michael Kasberg.

I can't find that I've ever featured a Kasberg song before, and I really should rectify that with one of his albums, because everything I've just mentioned - the syntax, the jokiness, the "slightly off" feeling, shines through on most of his songs - certainly more often than not. The word "idiosyncratic" could have been invented for Mr. Kasberg.

After several years of submitting lyrics to various song-poem factories, in the late 1970's, Mr. Kasberg set up his own label, Kay-Em (you might be able to figure out the source of that label name), and proceeded to write entire albums (at least eleven of them) of his various tributes, diatribes, pleas for peace and observations, among many other styles of songs. I truly encourage you to check out the Kay-Em page at the song-poem database and just peruse some of the titles. To just choose three at random, I find:

Life is Full of Bubbles
Drug Addiction Rampant
When Do We Eat?

The more interesting of today's two Kasberg songs is "Friendly Randy Polka", written in tribute, one would have to assume, to Mr. Kasberg's son - his only son, as you'll hear. I will say no more, and will let you discover the peculiar charms of this record for yourself.

The flip side, "Unusual Waltz", and like many of the songs on those albums I just linked you to, it is a bit of social commentary with a strong mix-in of religious themes. The lyrics seem almost completely disconnected from the title phrase, and they feature words used in ways that seem out of place, or which make no grammatical sense in context, such as "touchingly". That's used here as a key word of the lyric, yet it's seemingly flown into that spot, as if in a game of Mad Libs. That feature is such a hallmark of Michael Kasberg's writing, that if I'd heard this song first, before looking at the writer credit, I'd have guessed it was his song. It's a weird, but endearing trait, from an absolutely unique lyricist. 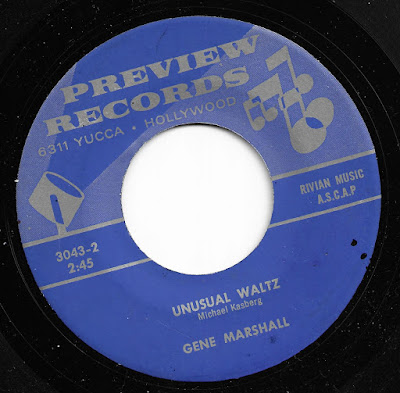 As promised, here is my family's Christmas Card. Just so you know, for most of the last several years, my family has been using the Christmas Card concept as a jumping off point for a bit of performance art. Each of us has supplied ideas in the past - this one was mine. There's a lot going on here.... I'm in the middle, with my adult kids on either side of me and my wife on the far left. On the right is my daughter's boyfriend. 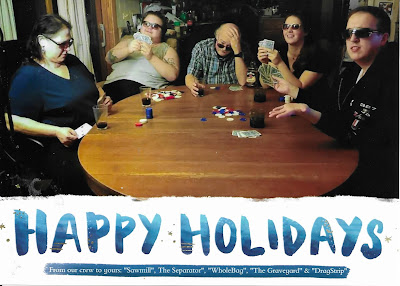 Yes, so much better than Paul Anka. Admittedly, I don't believe that's a hard thing to do - I've only heard two records by the man that I'd want to leave on. Oh, and there's "Johnny's Theme", which is damn good. But he has something approaching a record for near-consistent awfulness. Plus, today's title predates his song of the same title by more than three years. More in a moment.

But first, I have again updated a previous month's set of busted links. And this month, June, 2014, was a DOOZY, with five posts and FOURTEEN songs shared.

These include a SIX song Real Pros EP (the details of which I have amended today, with a correction), a nice Rodd Keith record, An MSR release with two very closely related songs, a remarkably tedious Sammy Marshall record, AND - drumroll please! - a record on Tin Pan Alley which has to qualify as one of the most entertainingly horrible 95 seconds ever committed to any form of recordable material. I strongly suggest those who haven't heard "The Proon Doon Walk" to immediately link to that page and have a listen. That's why I've linked the same post four times. 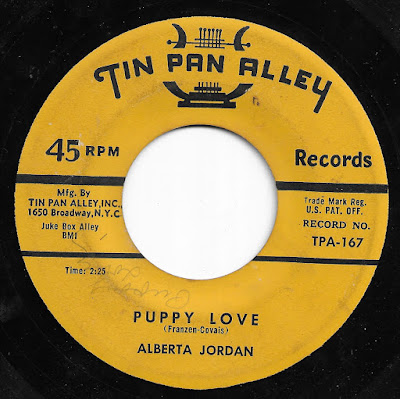 And there are certain friends of mine who will know, upon listening to it, that I LOVE this record. It's got a bunch of things that make my ears perk up: what Billboard called the "rock-a-ballad" style, complete with piano triplets, a nice overabundance of reverb on the vocal, and speaking of that vocal, a pleading, emotion-laden teen girl (or, in this case, most likely faux-teen girl) vocal, one which absolutely sells the lyric in a "this really happened" way.

That this happens to have been a song-poem is just icing on the cake - it gives me a chance to share it with the world. But this record, unlike the vast majority of song-poems, is almost indistinguishable from dozens of other actual failed attempts of the day at creating a real hit (and also not, as is so often the case, a record that sounds like attempts at hits from five years earlier. This sounds like 1956).

The flip side, "Moonlight Among the Willows", has some of the same aspects that make me love "Puppy Love", but no one but Alberta seems to be as invested in this one - the melody is not as indelible, and it's just missing that unidentifiable.... something... which the first side has in spades. I do, however, adore the tone of her voice on the long held notes for the word "willows" near the end of each verse. I could live in those vibrato notes for a week. 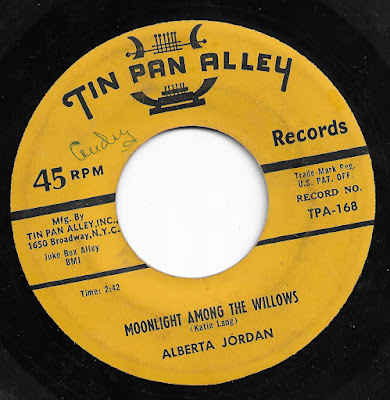