COOL THAT MOTOR DOWN! 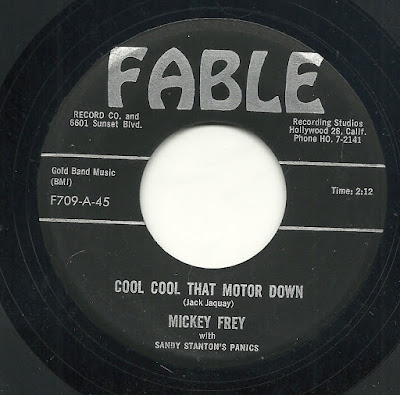 I'm ending the year with a fairly wonderful release on the Fable label (a label which had a much higher percentage of wonderful to other-than-wonderful releases than virtually any other song-poem label). And the A-side of this one gives me pause, in describing it as a song poem, because a.) it's so strong a song, arrangement and performance and b.) not all of Fable's releases were song-poems, although a good majority of them were song-poems or vanity releases.

But a little digging found that the author of the song, one Jack Jaquay, had a minimal background as a writer, at least based on the Catalog of Copyright Entries. Add that to the dismal quality of the material on the B-side, and I'm pretty sure this is either a song-poem or a vanity release.

The inspiration for 1959's "Cool Cool That Motor Down" (sung by the previously unknown Mickey Frey) is likely the songs "Hot Rod Race" and its sequel, "Hot Rod Lincoln", at least in the arrangement and structure of the song, and its automotive subject (for the first two verses, anyway), if not the specifics of the story told.

And to these ears, it sounds mighty good, complete with sound effects, peppy guitar and drums, and an effective lead vocal. See if you don't end up singing the chorus after the record's over.

As alluded to above, the overall quality of the flip side, "Just For You", leaves little doubt in my mind that this side, at least, is a song-poem. No effort appears to have gone into making this into a good record. The pianist makes multiple errors, the singer sounds like he's seeing the words for the first time, and the entire band sounds like they are on autopilot. Then there are the words, which suggest a first attempt at writing a love poem. Well, at least it's sort of bouncy.

Download: Mickey Frey with Sandy Stanton's Panics - Just For You 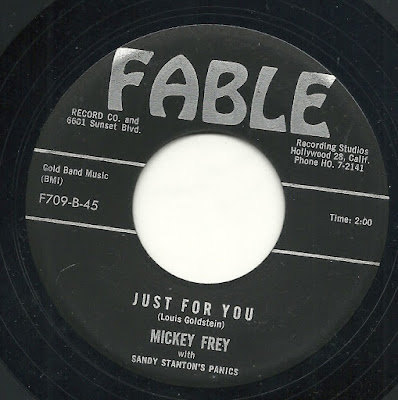 The Eyes of Santa Claus Are Going Back to New Orleans 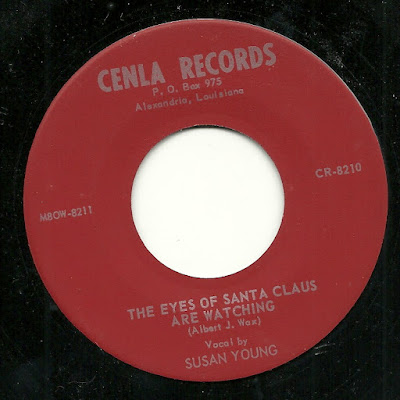 Just in time for Christmas, I purchased a Christmas Song-Poem. This one appears on the tiny "Cenla Records" label of Alexandria Louisiana, and the songs are copyrighted in 1961, per a little bit of internet research.

Cenla Records is barely represented within the vast reaches of the internet, mostly just references to this record, and a rockabilly record from 1959 (which has sold for over $150), which can be heard here. They do seem to at least possibly be the same "Cenla Records" - the label numbers both start with "CR", although on the other hand, why wouldn't they, given the name of the label(s)? The 1959 release does not sound like a song-poem record.

This one, however, does. The side I'm featuring first, "The Eyes of Santa Claus Are Watching", by the previously unknown Susan Young, seems like a stereotypical early offering from the Globe song-poem factory. Careful listening will demonstrate that the song only has one verse, and even with that verse sung twice, a guitar solo, and a coda, the record still only lasts 93 seconds.

On the flip side (and written by the same song-poet), is a real treat, at least in my book, and further proof that this is a song-poem record. Yes, it's the ridiculously over-the-top Roger Smith, here treating to his rendition of "I'm Going Back to New Orleans".

As with the flip side, there is only one verse, repeated twice and separated by a nice solo section, and this time, they manage to fill up a full 95 seconds. The band here is fairly wonderful, and the note(s) that Roger Smith sings at 0:59 should be in the hall of fame. Which Hall of Fame, I'm not sure, but it deserves enshrinement. ' 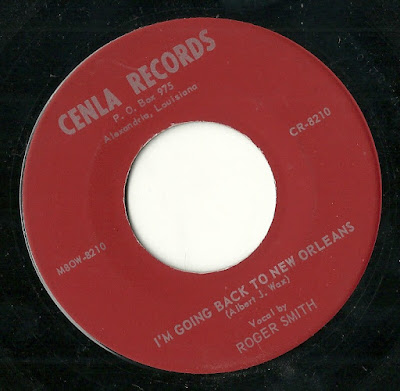 Merry Christmas and Happy Holidays to everyone - I'm so glad that I've been able to feature song poems, usually once a week (or at least three times a month) for nine full years now, and plan to start the tenth year in a week or two. Thank you so much for reading and listening.
Posted by Bob Purse at 7:20 PM 2 comments:

First, I want to send a message to David S, who wrote to me recently about a Fable record I'd posted. He indicated that he wanted to share more information, but in e-mail. I'd rather not post my e-mail here, because I've found that leads to massive amounts of spam, but if you go to this post from a project I was involved in, in 2003, you'll find my e-mail address there, at the end.

(Also, thanks to Dan for a recent comment containing a strange sidelight to the Tin Pan Alley story!) 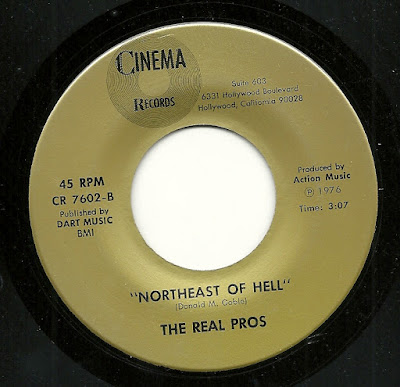 Every now and then, I find a song-poem listing - in recent years, usually on eBay, but in many places, over the years - which has a title that I just can't refuse (providing the price is right). The sort of title that draws me in even if the performer or label or era is one that I don't normally collect. Such would be the case with a 1976 Real Pros single on Cinema. The chances that a record from that troupe (whoever was singing), in that time period, would appeal to me are roughly one in fifty. Maybe less.

So here it is, and in this case, The Real Pros are fronted by Dick Kent. And I will not make the argument that it's a world wide winner - for one thing, it has the typical, soulless, going through the motions band sound of 90% of the song poems I've heard from after about 1974 (from this and every other label), with that awful early synthesizer sound, to boot.

But it does have a remarkable lyric - a plaintive cry of a lyric from a soldier who is deeply regretting having joined the U.S. army, due mostly to where Uncle Sam has decided to have him live. He is so disillusioned he even advises others to.... well, I'll let you hear for yourself, but it is a truly startling line.

If there's a pleasure to be found in the flip side, "My Last Care", it's escaping me. Perhaps those of you who enjoy the style of music being aped here will like it more than I do. Dick Kent injects some feel into the lyrics, I guess, but I have no use for this sound whatsoever. 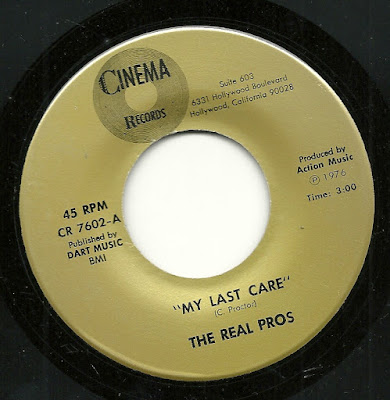 Email ThisBlogThis!Share to TwitterShare to FacebookShare to Pinterest
Labels: Cinema, Dick Kent, Song Poem of the Week, The Real Pros 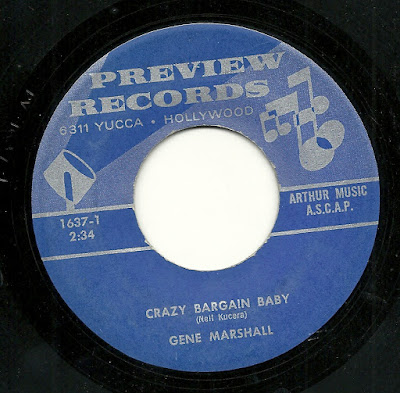 So how did your Black Friday shopping go? And since then, have you found any crazy bargains? At the store where my wife works, today is the big sale for the season. Get there now!
Anyway, for your dining and dancing pleasure, here's the great Gene Marshall, accompanied by a loose sounding, first rate band (I especially love the drumming), singing up a swingin' storm, all about a subject ﻿just perfect for the shopping season, a "Crazy Bargain Baby". Just one caveat, though - she won't let him pet!
Sing it, Gene!
Download: Gene Marshall - Crazy Bargain Baby
Play:
The flip side is a moldy piece of MOR balladry called "Goldie". Perhaps you'll enjoy this more than I do, and can work up some words of which it is worthy. I cannot.
Download: Gene Marshall - Goldie
Play: 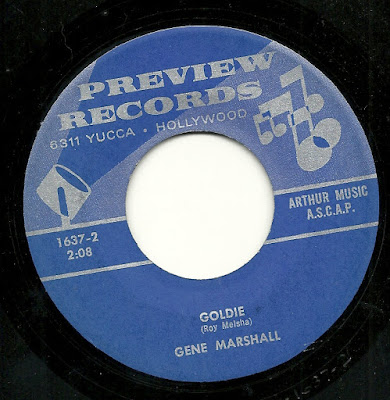