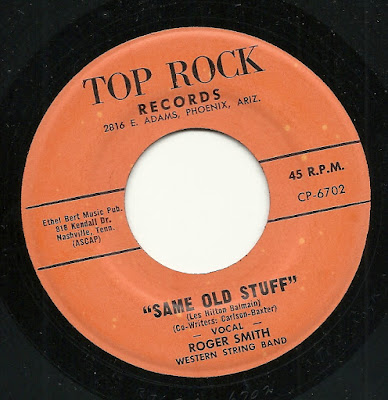 Here's a record I've owned for all of about five hours, and I couldn't wait to share it with all of you.

Because today's featured singer is Roger Smith. He primarily recorded on the Air label, but his name turns up on a dozen other, smaller labels; in this case, the tiny "Top Rock" label. The blandest of names masks one of the most unusual singers of song-poems in the field. I have only heard a handful of records he recorded, but have loved every one of them. He had a borderline ridiculous, yet endearing way of selling a song.

The reason I have never featured Roger Smith here is that most of the tracks I own which were released under his name, I own only as MP3's, those graciously gifted to me by fellow collectors. and I have generally not featured records that I don't personally own. And the only Roger Smith record I did own, prior to today, has already been shared on another blog. I see that the post I refer to, now has dead links, so maybe I should share that record, soon, but in the meantime, here's the better of the two sides, posted to Soundcloud. It's one of my favorite records ever.

Today's offering, which doesn't quite match that track for sheer wonderfulness and insanity, is still 100% wonderful. It's called "Same Old Stuff" - a mention in Billboard dates this release to late 1961, but it seems to exist pretty much out of time, a rather peculiar and unique mix of elements of Western Swing, Dixieland and Roller Rink Organ. And if I haven't already made it clear, it's magnificent from start to finish. As if that musical backing wasn't enough to draw me in for multiple listens, Roger Smith again provides a weirdly compelling and inimitable vocal. I love this singer, and I love this record.

As much as I've just praised the Roger Smith side of this record, I don't want to neglect the flip side, which is just as wonderful in its own way. It helps that the singer is Cara Stewart (that always helps), but in addition, this is a funny song with some inspired lyrics about the implications of having a lot of kids on one's love life. If I'm taking the lyrics literally, I believe the writer intends us to think the protagonist of the song has 15 children. Cara Stewart does her usual great job of selling the material, and Lee Hudson's group, with that indelible guitar sound, support her nicely. 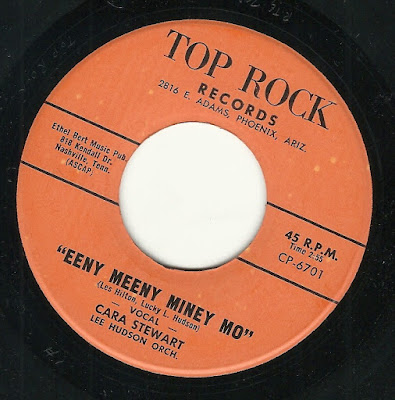 Not that you asked, but an even better song, on a similar subject (at least in the early verses) - and one of my very favorite records ever, is by Jimmie Driftwood, and can be found here.
Posted by Bob Purse at 4:56 PM 3 comments:

Is That You, Popeye? Nah, It's Just Billy Grey 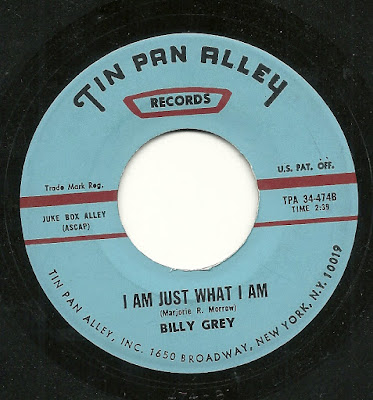 It's always a good day when I get to share the sounds of the perpetually ridiculous Billy Grey. I don't have nearly enough of his records, or else I'd feature him more often. His borderline incompetence, paired with the material his bosses at Tin Pan Alley gave him to sing, topped by the genuine incompetence of the band TPA used at that moment all result in records that are stunning in their entertaining awfulness.

First up, let's hear Billy sing the plaintive cry of a normal, idiot American (and proud of it), in the song "I Am Just What I Am". Here's a fun game - count the number of times that the bass player doesn't follow the chord structure, and then add in the time (near the end, in the last bridge) that the rest of the band seems unable to agree on what the chords are supposed to be:

Download: Billy Grey - I Am Just What I Am
Play:

The flip side, "Tongue Tied" may well circulate among song-poem collectors. It was part of the original set of downloadable songs on the AS/PMA site, but somehow never migrated over to the otherwise "complete" set of those downloads that cropped up years later at the WFMU blog.

This one is also worth hearing, for it's general half-assed-ness, but also for a fairly weird turn taken by the lyrics. 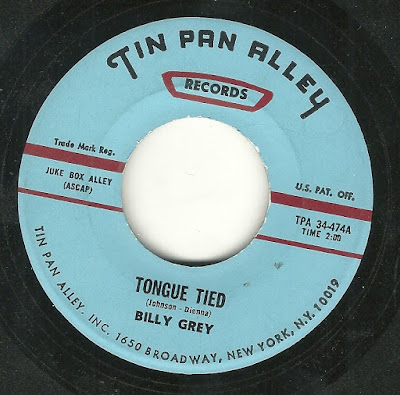 Dick Kent's Home Is His Castle

Before I get to this week's feature, I have quite a bit of housekeeping - a variety of comments which I want to acknowledge, share with the readers and/or respond to.

First, regarding what I thought was a mysterious performance labeled as being by "Rod Rogers" on Halmark, of all places, a great blogger and frequent commenter here, Darryl Bullock, has indicated that there indeed was another song-poem performer who went by that name, aside from Rodd Keith. He writes:

Surely the vocalist on Trailways Bus Driver is Nu Sound's dreadful Todd Andrews? Incidentally, there is also at least one Rod Rogers 45 on Nu Sound, 1008: Don't Be A Dope/Birds And Bees And The Stork (both L. Smith). I don't have a copy of the latter but I'd put money on that Rod Rogers being Todd Andrews rather than Rodd Keith

Regarding a post from February, featuring a singer identified as "Dan Monday", who I indicated was Rodd Keith, I heard the following from our friends at the excellent record label Roaratorio:

Just as an FYI.... Rodd Keith was *not* the singer known as Dan Monday, on any of the records, as far as I know. I think this misconception was fueled in part by the misattribution of the Dan Monday track "General Custer's Story Remains Legend" on 'I Died Today' to Rodd... but they were most definitely two different vocalists. Milford Perkins also gets lumped in with the Rodd pseudonyms on occasion, but he too was a different vocalist.

It's not clear to me how the writer knows for certain that Dan Monday is not Rodd - it certainly sounds like him to me - and I admit that I've not written to ask, due to the general busyness that I've alluded to, but I will defer to the folks at Roaratorio, whose knowledge and insight about Rodd far surpass mine.

Are you aware of any song-poem companies that are still active or is this pretty much a dead medium in the 2010s?

It's not I can't answer this for certain - but I strongly suspect that the scam is still out there. It certainly was a decade ago, when a friend of mine was an avid collector of recent CD releases of song-poems on the then-current song-poem labels. Also, in the late '90's, a few of us got together and purchased a song-poem based on a poem by a late acquaintance of one of our group - I believe the price was $200 - and I think we did business with the folks who now run whatever the current name of Halmark Records has become. To be certain about its continued existence, one might buy a copy of The National Enquirer, or some other similar rag, and look in the classified ads, but that's not something I'm going to do. I know for a fact that the poetry version of this scam (in which people are self published, or have their poems narrated on CD) still exists.

Thanks, everyone, for writing - I really appreciate all comments!

And now, on with the countdown! 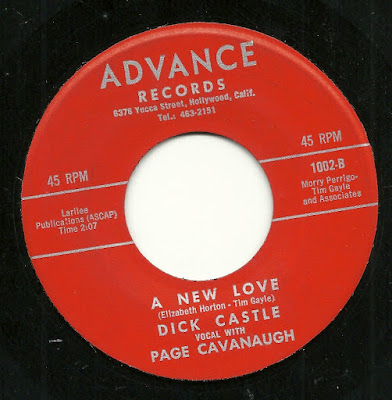 Today, we have the singer best known as "Dick Kent", sounding very young, singing in what I'm guessing was early in his career, trying to "advance" himself up the ladder of success, on the Advance label, under the name "Dick Castle". The song is "A New Love", and the entire, fairly pleasant, non-taxing enterprise sounds like something Paul Anka might have released in the early '60's (which is when I'm guessing this dates from), including Dick himself sounding more than a little bit like Anka. Although I hasten to say, Dick Castle/Kent, like 98% of the vocalists who have ever been recorded, is a better singer than Mr. Anka.

Download: Dick Castle, Vocal, with Page Cavanaugh - A New Love
Play:
\
The flip-side, "Dream One Dream At a Time", is a far duller trip, to my ears, a lyric as clunky as the title, and a music bed which has nothing to recommend it. 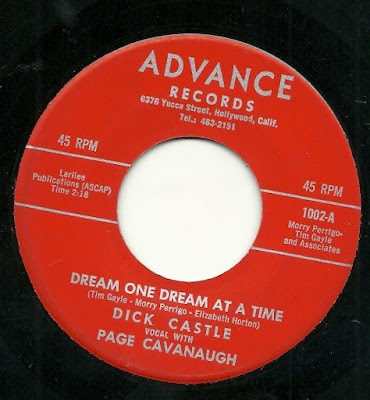