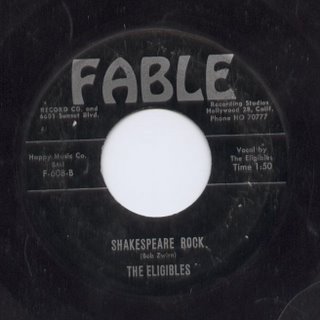 Newly uploaded to the Gmail site are three of my newest 45 rpm acquisitions. All three come from labels associated with the song-poem field, but I suspect that only one of the three is technically a song-poem.

That one would be "Atom Dynomic Dance" by that man about town, Phil Celia. One doesn't come across a twist styled record suggesting a dance based on an atom bomb explosion every day. Not only the words strike me as some amateur's attempt to clever, but the fact that the melody (at least as sung by Mr. Celia) doesn't quite fit the chord changes, tells me that this wasn't designed to be promoted as an actual hit. The Tin Pan Alley label on the record helps, too. And is "Dynomic" even a word? Okay, everybody! "Let's Go Boom and Mushroom, Let's Be an Atom Blast...!"

Next up is Barney Spencer and the Vellaires, on the Vellez label. I have only a few records on this label, and each of them is odd in its own unique way. This is just a cute little song, pushed over that line between fun and really fun by the singer's Scandinavian accent. I have a suspicion that this was a vanity release, but I could be wrong.

And then there is "Shakespeare Rock", by the Eligibles. Records on the sometimes song-poem related label Fable never cease to amaze me, whether they are song-poems or not. The lyrics of this one strike me as far too knowingly ironic, and it also seems too well arranged, musically, to be a throwaway song-poem. I suspect this record was meant as a deliberate joke, and whether I'm right or not, it sure as hell makes me laugh. It's well done, all the way around. I'll let you discover its charms yourselves.

Comments welcomed and greatly appreiciated!
Posted by Bob Purse at 8:47 AM 2 comments:

Cool Yourself Off! (The Perfect Record, Part Three)

Just in time for summer, I've just uploaded a little known, ridiculous novelty song from the early 1960's (one which came out on a major label, no less), called "Beer Beer Bottla Beer" by A.C. Ducey.

I first heard this song on the Dr. Demento show around 1980, it immediately went into heavy rotation, and I spent the next 20 years looking for a copy, finally securing one on eBay a few years ago. I don't actually drink beer, finding it quite vile, thank you, but that doesn't stop this record from being one of my all time favorite records.

That's not Thurl Ravenscroft singing, but for more than a moment one might think it is, even though I now suspect that the vocal has been slowed down for effect. And as one might have gathered, I'm a sucker for an eccentric bass vocal performance.

There is so much to love here, from the double tracked vocals, which start and stop more or less at random, to the understated arrangement, to the minimilist lyrics ("whattaya mean, wait'll next year" being my favorite moment), to the clinking of beer bottles as the instrumental sections begin. I can't imagine a way this record could be improved!

I hope this will become one of your favorite songs, too, whether you enjoy beer or not.
Posted by Bob Purse at 11:08 AM 1 comment:

Email ThisBlogThis!Share to TwitterShare to FacebookShare to Pinterest
Labels: 1960's, Humor, Perfect Records, Thurl Ravenscroft (It's Not Him), Undefinable

I don't really have any clue how many or how few of you are out there reading this little site, but if you've been here from the start, or read the archives, you may have come across my post about "The Moreland Tapes", connected to the posting of the song "Head Cheese". You can read it here:

Well, since the last time I posted, I've learned a lot about the singer of that song (and of the other song referenced in that post, "Reputation"). Another piece of writing I did about these tapes came to the attention of a relative of the Moreland family, and I eventually heard from two of Merigail (correct spelling) Moreland's relatives.

This quite quickly became the most bittersweet of meetings: I was, on the one hand, able to learn that Merigail, whose voice I'd adored on these tapes for so many years, actually made a handful of records, copies of which I was sent. I even learned that she was(perhaps briefly) a Chicago area celebrity, co-hosting her own "American Bandstand" style show, locally, while still in High School in the late 1950's. On the other hand, I was deeply saddened to learn that her life was cut short by Lupus, at around age 48, in 1991.

She apparently worked as a singer for much of that short life, and I may yet get to here more of her recordings. But for the time being, I have spent the last six or seven months, listening, obsessively at times, to a single she released on a small Chicago label, in 1960. There were actually at least three singles, under then name "Merri Gail", one in 1955, and two in 1960, but this one is the "shoulda been" hit, and the quality of her singing just gives me chills at times. And she was all of 16 or 17 at the time.

I've uploaded both sides of this 45 to the bashleo/gmail site. The version of "Unchained Melody" is first rate, with a great arrangement (love that accordian), and a sexy, longing vocal that seems more knowing than I'd expect from someone so young. Also, the growth in ability and technique from "Reputation", just three years earlier, is astonishing.

But as great as I think "Unchained" is, it was only the B-Side to the completely wonderful (if oddly named) "Oo-Lee, Oo-Lee, Papa, Oo-Lee". There is not a thing about this record that I don't adore right down to my bones, and it's flown right to the top of my favorite records of 1960, along with "Cathy's Clown", "It's Now or Never" and the Olympics' "Dance By the Light of the Moon".

For "Oo-Lee", before even considering the lead vocal, there is the goofy way the song starts in the middle of a musical phrase, that great bass voice, more coloring from accordian, and a swinging late '50's take on doo-wop. The lyrics are a bit ridiculous in places, but Merigial just sings the hell out of it, suggesting a depth of emotion behind the words that makes me believe she meant every word of it. And the dichotomy between the softly longing vocal of the choruses and the demanding, pleading vocal in the bridges is great, too.

It pales next to the tragedy of her short life, of course, but I was truly hoping to someday find Merigail Moreland, meet her, and tell her how much I've loved her recordings, and I've been very saddened to learn that this can never happen. Is it possible to have a crush on a singer who was grown before I was born, and who has been gone for 15 years, based on nothing more than her recordings?
Posted by Bob Purse at 10:34 AM No comments:

Well, after nearly six months of some fairly overwhelming work and family demands, I'm hoping this is a fresh start, and that I can start posting new words and music at least a couple of times a week, if not more often. Those of you who give this site a second chance should be rewarded with some fairly frequent new (old) stuff to listen to.
Posted by Bob Purse at 10:32 AM No comments: