Helping You Get In That Winter Mood! 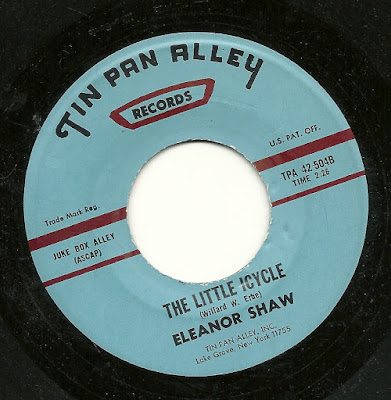 It's been hard to tell it around these parts (just outside of Chicago), especially with temperatures yesterday above 60, but Winter began either on December 1st (if you listen to the Meteorologists) or three days ago (if you listen to almost everyone else).

To help get you in the mood, here's a record from Tin Pan Alley, from the label's mid-to-latter days, a period when their hiring standard seems to have been "only allow people who have minimal talents on their instruments or in singing".

At least either the typesetter or the song-poet himself kept with the incompetence theme, spelling the word "Icicle" as "Icycle" (I only just noticed this, so if you are a perfectionist, you'll need to change the spelling on the downloadable track).

It's worth noting that at one point the lyrics move us into August - I'm not at all sure we weren't there from the start. If so, Eleanor Shaw is singing to something that isn't even there.

The less said about the flip side, "Always", the better. Suffice it to say that Irving Berlin has nothing to worry about. 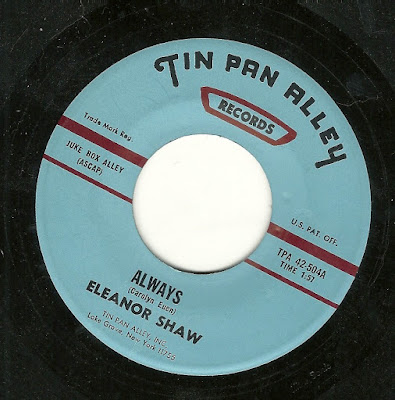 HAPPY CHRISTMAS, EVERYONE!!!
Posted by Bob Purse at 1:44 PM 1 comment: 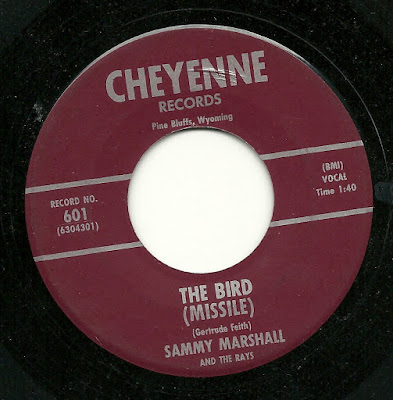 So it appears that Gertrude Faith decided that she had material that had to be heard, and she contracted through the Globe Records song-poem factory for a few of her lyrics to be turned into song, sung by label superstar Sammy Marshall. This seems to have been in 1962 or 1963. In her case, she decided to form her own label, naming it after the biggest town in her area, Cheyenne, WY, just about 40 miles from her local burg of Pine Bluffs, WY.

Okay, so far so good - many other song-poets did the same. But let us look at the songs featured on one side of this record (which may very well have been the only record ever issued on Cheyenne Records). It seems to be about the men who guard the nuclear missiles pointed at the Godless Commies, and the guards' fervent hopes that those missiles never have to be used. And it is in a slightly different style than most of the records Globe produced, with the martial beat and 91 second length.

Still, not totally unusual. But why, oh why, did Gertrude decide on the aggressively un-commercial, confusing and ridiculously clunky title, "The Bird (Missile). Will we ever know why? Would anyone, then or now, looking at that title, have any chance of knowing what it was about? These are the things I ponder when I have nothing more important to do.

Download: Sammy Marshall and the Rays - The Bird (Missile)
Play:

A far more typical lyric, title and Globe Records performance can be fond on the flip side, "Game of Love", which predates the big hit single of the same name by a couple of years. If I'm understanding this lyric, this ballad is sung to a young lovely for whom Sammy was once guy # 1. But now she's up to guy # 9, and still she's not happy. Yes, both records involve people grouped into a set of 9. Paging John Lennon!

Download: Sammy Marshall and the Rays - Game of Love
Play: 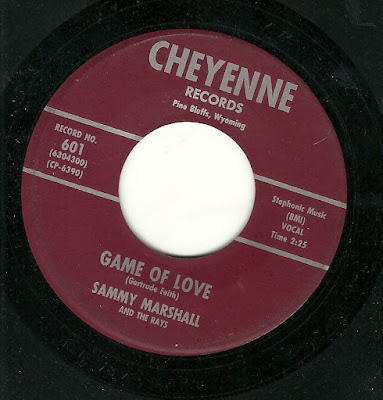 By the way, thanks to the person who posted a comment about a file link being broken on the post about "One of Satan's Angels". I have fixed the problem!
Posted by Bob Purse at 8:45 PM 2 comments: 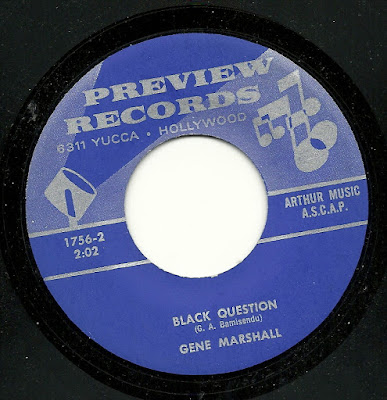 I think this is just one of those weeks when I let the featured song speak for itself. And even if I didn't think that, I'm not sure what I'd say about Gene Marshall's performance of "Black Questions", because I have absolutely no idea what the hell this song is about. In fact, I welcome all commenters who wish to chime in and speak to the meaning of G. A. Bamisendu's idiosyncratic lyrics. Please. I beg you.


By the way, the song poem database informs me that G. A. Bamisendu also provided the lyrics for a song called "Luster Galore", which is a hell of a phrase. Also note that the label claims the song is over three minutes shorter than it actually is.

On the flip side, there's a peppy pop song called "Get Ready Miss Betty". The first thing that occurred to me about this record is how similar the backing instrumentation and arrangement is to the all time Gene Marshall classic "We Are the Men Counting Sheep", which you can hear here. Sure enough, their label numbers differ by only a few digits. My guess is that they were recorded the same day, or at the very most, a few days apart.

This one isn't in the same category as "Counting Sheep", but it has a driving, forceful band, with some wonderful drumming, and is definitely worth a spin or two. 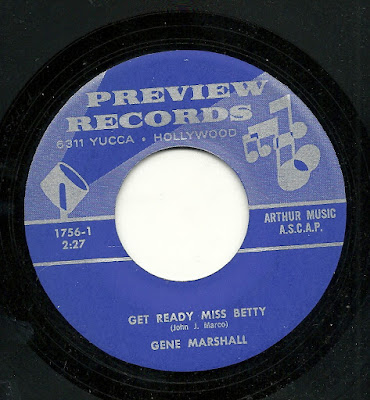 And a very happy 94th anniversary of my father's birth to everyone out there. Wish you were still here, dad.
Posted by Bob Purse at 12:13 PM 3 comments: