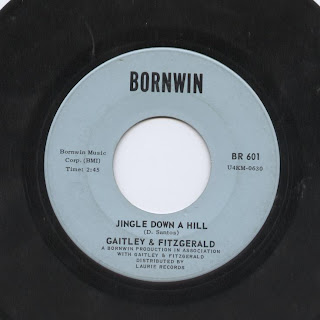 This song was actually featured as part of a post to the 365 Days Project last year, but I fear it got lost as part of a collection of random singles that I posted to that project, all in the same day, and it really deserves to shine on its own.

Here's a portion of what I wrote at that time about the song, "Jingle Down a Hill" by Gaitley and Fitzgerald:

This one is so good I can still picture where I was the first time I heard it: Almost 20 years ago, I was on my way to a new job, and listening to a cassette tape I had made of a stack of 45's, recorded earlier that day (with one of those record players which would drop the records one at a time). "What the hell was THAT" went through my mind, and I rewound it and listened about five more times. It's actually the B-side of a song which has been included on several psychadelic comps, but that song on the A-side doesn't move me at all.

On the other hand, this B-side... well, it's just one of the loveliest things I've ever heard. The folky arrangement fits the song perfectly, the Everly Brothers harmonies on the bridge get me every time, and the simple piano figure at the end of each chorus has echoed in my head since that first listen in 1990. The cruddy production prevents me from making out every word, but I can get most of them, and they portray a sweet description of tender love for the singer's girl, and time spent together.

"Whistlin' as we walk along, smilin' all the way
Singin' with the summer wind, slow and happy days
Alone and free, the world to see, Jingle down a hill"

Although I'm sure I have a couple of the words wrong, here and elsewhere in the song, I certainly get a detailed picture of the life the singers are describing, and the imagery is absolutely magical. If anyone wants to have a go at all of the lyrics, and perhaps catch a few I've been unable to make out, by all means do. I've listened to this record hundreds of times over the years, and it never gets old, and always hits me in just the right place.

As a followup to my recent post at WFMU's Blog about "The Three Little Pigs", I thought I'd post more of the obscure (and, to varying degrees, wonderful) 78's and 45's that my mother recorded on a reel to reel tape back in 1964, for posterity.

First up, two absolutely wonderful songs from Al Goodman and his Orchestra, in both cases, these are hi-fi era remakes (although these records are admittedly no longer "hi-fi") of orchestral favorites from the dawn of recording, songs originally recorded for Victor in the first decade of the 20th Century.

First up is "A Hunt in the Black Forest":

And the flip side is "In a Clock Store":

From the opposite end of the 'Wonderful' spectrum, come two sides of a children's 45, which apparently were excerpted from an album titled "songs about words". These are genuinely weird, especially the first one, which is titled "Rattlesnake":

The flip side is "Alphabeetle":

Next up are two songs that were favorites of mine in 1964 (when I was four), and which appeared on either the Cricket or Peter Pan labels. First up is a song that I actually used to sing at that age - I have a tape on which I'm singing it, none of which is odd, except that the song is "The Pretty Little Dutch Girl". Here's the record:

And here is a series of little poems, some of them quite odd, and another favorite from my childhood, titled "More Pussy Cat Rhymes":

Here's a wonderul little record from the early 1950's, if not earlier. It's the old song "Polly Wolly Doodle", but I've always been quite taken with just how much is going on during this performance, especially near the end:

Finally, an actually hit group, The Ames Brothers, with a song from the mid 1950's, featuring an extremely clever lyric and great harmony singing, "I Saw Esau":

Special thanks to mom for preserving all of these records while they were still in half-decent condition!
Posted by Bob Purse at 11:09 AM 13 comments: