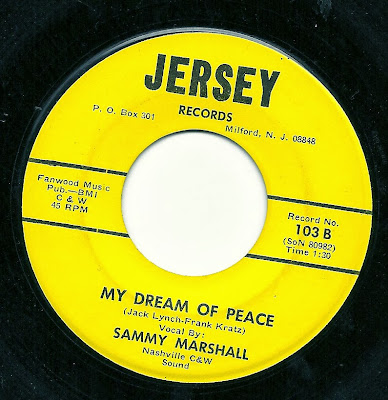 With weapons of mass destruction back in the news, along with the United Nations and, in this case, Syria all involved, I thought it was a good time to offer up this dream of a world without weapons, a dream of peace. I have a hard time thinking that the authors of this song weren't inspired (if that's the right word) by the song "Last Night I Had the Strangest Dream".

Perhaps they thought they could improve on it, or come at the idea from a slightly different angle. If that was the case, my impression would be that they failed - this comes off as a weak echo at best, an anemic copy at worst. The always game Sammy Marshall gives it his best, but when a song requires you to talk over the music for nearly the first third of the entire record, you're facing a challenge.

By the way, this record is on the Jersey label, which I've not seen before or since, and which is not listed on the AS/PMA website.

The flip side is a tribute to God's work throughout nature, with something of a John Denver feel (that's not meant as a compliment, by the way), sung by someone named Don McHan. Interestingly, the same name pops up as a songwriter on two other labels on the AS/PMA website, one of them, like this one, related to the Globe song-poem factory, although he is not listed as the songwriter here. The most interesting thing about this record may be the additional publishing information that someone wrote on the label of the record. 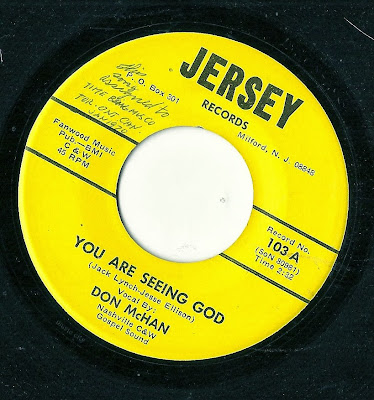 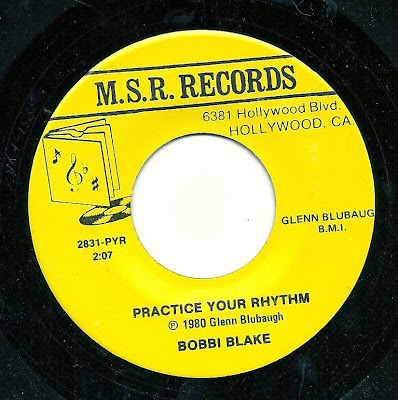 Regular readers will already know that I'm not much of a fan of certain song-poem labels - MSR and Columbine being the biggest names from the business that I can largely do without. But... I never intended this site to be just about my taste, and I should try more to reflect the whole world of the song-poem. I don't own much Columbine, so it rarely, if ever, shows up here, but I have MSR records coming out of my ears, and I might need to put them into rotation a bit more often.

Here's a start: A decent release from 1980, titled "Practice Your Rhythm". This is a nice enough shuffle of a track, with a bright, peppy and happy vocal from Bobbi Blake. The primitive synths (one of the things I could do without) are largely relegated to background flavoring, and the track is dominated by a real rhythm section, including a bouncy bass and some solid piano.

On the flip side, we have Dick Kent, telling us how "One Woman's Sufficient for Me". The lyrics to this one are quite odd at times - at one point he mentions that it's one "body" that is sufficient for him, and what's the reference to a voucher about? There's very little about this track that I like, but I will mention that it features some excellent and interesting bass playing.

Download: Dick Kent - One Woman's Sufficient for Me
Play: 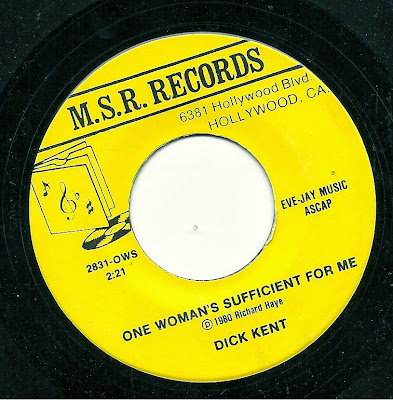 Norm Sings in the Sunshine 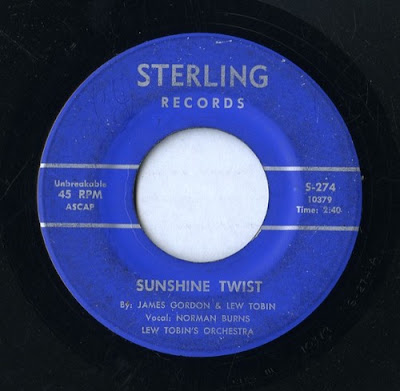 I don't actually own a copy of today's record. It was recently auctioned at eBay, and while I failed to take ownership of the physical product, I loved it enough that I pursued another opportunity to own it digitally, at least. This just occurred this week, and I could hardly wait to share it with the world, or at least this small corner of it.

It not only features perhaps my favorite song-poem singer, Norm Burns, it also clearly dates from around the same time, and quite possibly the same recording date, as my favorite Norm record (and one of my three favorite song poems), "Darling, Don't Put Your Hands on Me" (which can be heard here, among other places). The label numbers are only four digits apart, and as you'll hear, there are other similarities, as well.

This song and performance are certainly not in the same league with "Darling, Don't Put Your Hands on Me" (and really, few records are), but it's got the same feel, instrumentation and energy - the same driving piano, tenor sax (which even plays some of the same fills as on the previous record) and unique Norm Burns style. And then, during the solo break, there's a lovely vocal surprise from Norm!

The flip side, "The Wind and the Rose", is in poor condition, with a lot of surface noise at the start. This one is not up to the standard of the A-side, or even to Norm's average. It does, however, contain a rather interesting conversation - a bragging contest, of all things, between the title characters.

Before getting to today's offering, I have an out-of-left-field request: Does anyone reading this blog either understand Dutch, or know someone who does? I have a song that I downloaded from a now long-defunct website about a decade ago, which I just love. But I have no idea what the singer is singing about, and I'd like to. I'm pretty sure it's in Dutch. Please let me know, either via the comments (with an e-mail address) or via my e-mail, which is buried on this site somewhere.... And now.... 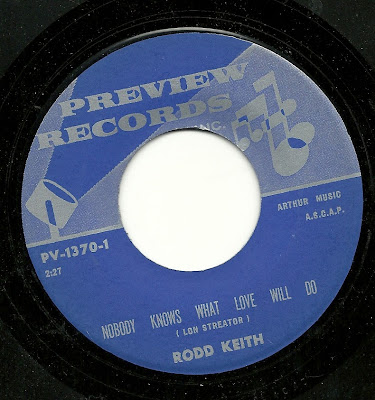 Two observations about life from Rodd Keith today, one spot-on, one cynical and off-base. At least, that's how I see 'em - your mileage may vary.

On the A-side, with a tasty supper-club style band behind him, Rodd offers up a first rate, silky smooth vocal on "Nobody Knows What Love Will Do". The words are pretty good, and the whole performance sounds like something that wouldn't have been out of place in a show at a club or a restaurant, way back when.

Download: Rodd Keith - Nobody Knows What Love Will Do
Play:

On the other hand, the basic idea behind the lyrics to "Friends are Few", seems to be that you'll only have companionship if you have money, AND if you freely spent that money with and on your friends. That hasn't been my experience, and I can't say that I've ever heard it expressed by anyone I know. The songwriter keeps telling us that this an "intelligent song". I beg to differ.

In contrast with the a-side, the backing arrangement and Rodd's vocal here show no sign of significant work or craftsmanship - the whole thing sounds rather cookie cutter and quickly thrown together. I have no knowledge of this, but I really wouldn't be surprised if Rodd gave his all only when the lyrics at least sort of deserved it. 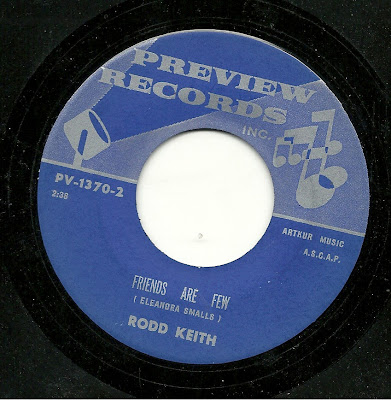