A Yankee Doodle Dandy of a Record 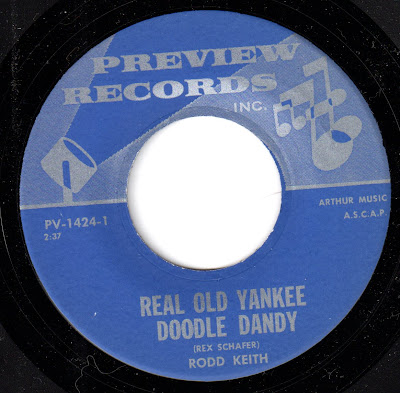 Here's a newly acquired Rodd Keith record which is certainly worth a spin or five. The first side, "Real Old Yankee Doodle Dandy", features Rodd in Middle-of-the-Road pop mode, with a really nice setting featuring a flute-led combo, with some really nice brushes on the drums. He's never lost his sand!:

The flip side, "In Memorial" is, to me at least, unexpectedly moving. It's a blue-eyed soul arrangement of a well-written tribute to the writer's (recently?) deceased mother. Again, the drumming is a stand-out here, but the real star is a first rate lead vocal from Rodd. 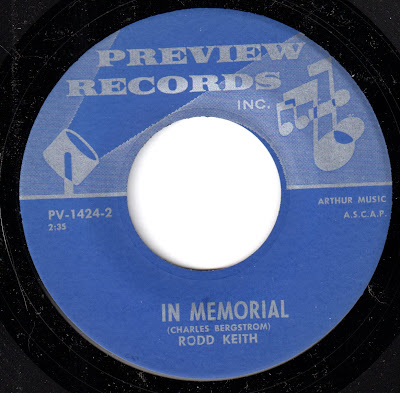 A bit of cross-pollination today.... 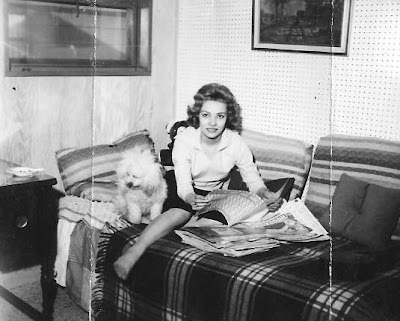 I recently received this photograph of Merigail Moreland at about age 17, from a person who had known her during High School. He requested that I post her version of "Unchained Melody" to this site. It's been featured here before, when I used to have the actual music at a separate download site, but never with the actual track within the post. And any reason to share Merigail's music is good enough for me. Here is her amazing 1960 45 of "Unchained Melody"

I've also used the opportunity afford by having been sent this photo, to post later recordings of Merigail (previously featured here) to WFMU, which I meant to do ages ago. That post can be found here, and it gives further links to other posts and information about her.
Posted by Bob Purse at 10:50 AM 3 comments: 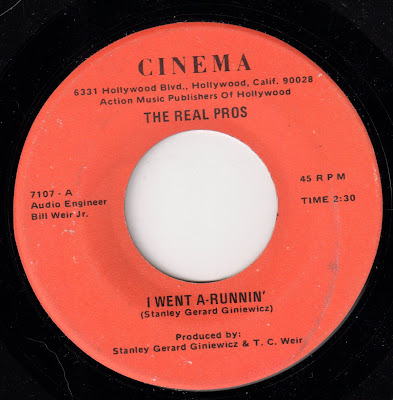 It's not my intent to make this into a parade of terrible records, but on the other hand, I've come into contact with such a glut of them lately, among which have been records so spectacularly bad that I can't hold back!

And it's not hyperbole to say that today's feature may well be the worst song poem record I've ever heard. At this moment, I can't think of one which is more misbegotten in lyrical construct, musical arrangement or vocal performance.

It's called "I Went A-Runnin'", by the Real Pros (on, of course, the Cinema label). This is a unique Cinema record within my collection, with a different style label than I've ever seen, and the lowest number in sequence (lower than anything listed at ASPMA).

This is clearly a one man band ("The Real Pro"?), and perhaps the same performer heard on the classic "Deep Freeze Mama" from the same era. But oh what a difference a lyricist and arrangement makes.

A repetitive keyboard figure leads to an equally repetitive melody, and some truly mindnumbing lyrics, performed by someone who appears to have no interest in either the song or his own performance of it. Have a listen for yourself:

The flip side, "Our Flag", if anything, features an even less competent performance. Some may actually consider this to be the worst of the two songs, and I think that argument can be made, but "Runnin'" gets my nod. The sound quality here is also marred by a fairly beaten up 45 (which I've tried to make listenable), meaning that someone either actually played this one a lot, or deliberately scratched the hell out of it. 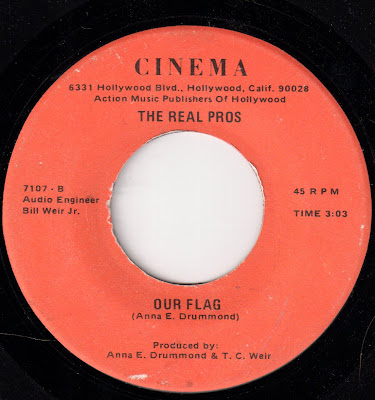 If Rod Stewart Had the Worst Cold in History

Today's mid-week change of pace comes from one of those "instant cover version" albums which were popular in the US in the '50's and '60's, and remained extremely popular in England throughout the '70's. I believe several of these "Top of the Pops" albums were big hits on the English album charts. Coincidentally to my ongoing song-poem series, these were on the Hallmark label! (No relation.)

I find these albums enjoyable enough to spend a buck or two on, and rarely listen more than once or twice (as opposed to the HIT label 45's from the '60's, which are often pure gold). But in this case, the lead track, a version of "Maggie Mae" struck me as quite a bit more ridiculous than most, and thought I'd share it.

Enjoy this nameless vocalist, who seems to be both imitating Joe Cocker and predicting Bob Seger with one of the more hapless vocals I've heard lately.

Email ThisBlogThis!Share to TwitterShare to FacebookShare to Pinterest
Labels: 1970's, Cover Versions, Top of the Pops 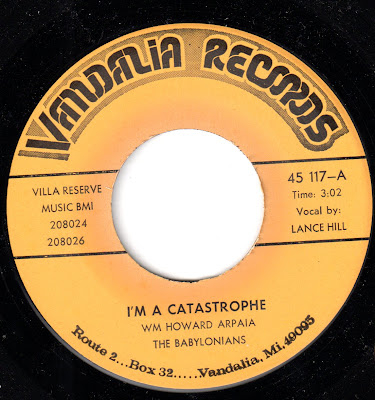 Among the many, many stories contained within the many worlds of song-poems, few are weirder to me than the story of William Howard Arpaia. I can hardly do it justice in a few lines, but there is a really good rundown on the man and his work here. One thing that ASPMA site does not mention is that Arpaia claimed to have suddenly developed the ability to write songs, marches and polkas on his 61st birthday.

That essay is also quite a bit more admiring than what I would probably write about him. Based on his lyrics, I find him to be a fairly contemptable person, a crank, really - one of those "things will never be as good as they were in the old days" types. I also suspect that by the time he started producing his albums, he wasn't exactly in position of all of his faculties anymore.

And I haven't even gotten to the music. For the most part, his tunes are fairly samey, with odd melodic runs which switch abrutly to notes that don't seem like they are where the tune had been heading. And I have a hard time telling his marches or his polkas apart.

This one, however, is an exception, as is the most famous of his records, "Listen, Mr. Hat". Like that one, this one never appeared on an Arpaia album. Maybe it was unintentional, but I don't think so, and I don't know who had the idea - the performers or Arpaia himself - to perform this in a Dylanesque voice, but assuming it was deliberate, it was a masterstroke. Please enjoy Lance Hill with "I'm a Catastrophe":

For completeness sake, here is the (endless) b-side, "The Christmas March": 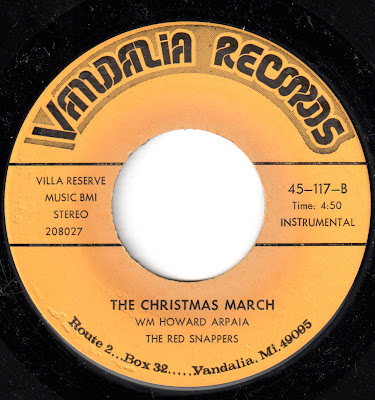 The Voice of Love Making 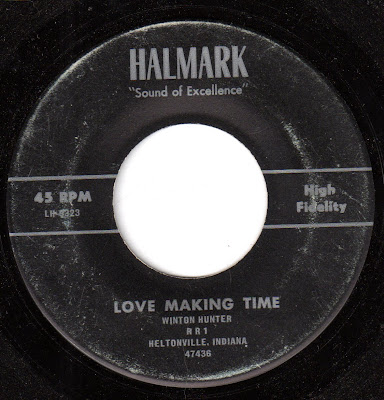 I thought it was high time for a little Halmark records fun, and who better to bring that fun to us then.... well his name's not on the record. But he's here to encourage the little woman into a bit of... not "lovemaking" but "Love Making Time". And with that golden voice doing the encouragement, who would have - could have - refused? Men, try this one out on Valentine's day next weekend, and thank me later!

From the same songwriter comes the echo-laden b-side, "Let Us Dream Again". Keep in mind that, like most, or perhaps all, of the known Halmark label records, this little slice of pre-rock and roll style music was recorded some time in the mid 1970's, most likely 1976, in the case of this specific disk. Imagine this one getting onto the airwaves back then, right between "Play That Funky Music" and "Muskrat Love". Sure, it would outshine those other two records in quality (it'd be hard not to do that), but can you imagine anything that would have fit in less well with the music of the day? 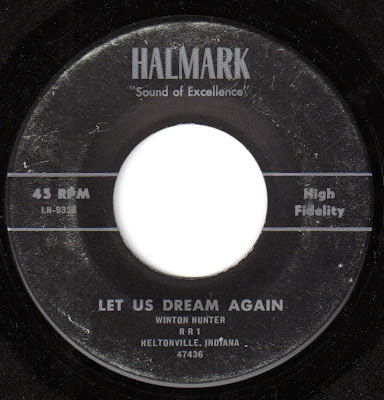