A Real Pro in Napoli 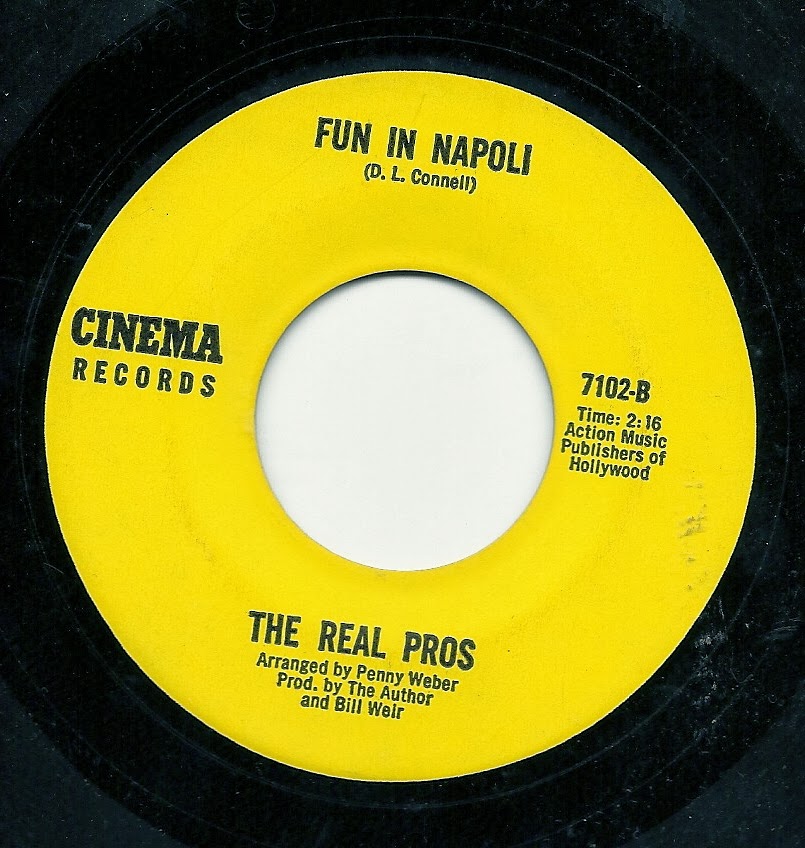 Our trip to locations around the world continues today with a delightful trip to Italy with our one-man-band friend who for a time was known as "The Real Pros". I've no doubt that, when this conglomeration is mentioned, most song-poem collectors think of the glory days of the MSR crew, who, on their days off from MSR, took over the anonymous role of Cinema's "Real Pros" by about 1973.

But as I've said before, I'm much partial to the nameless man who's work is featured on the earliest Cinema sides. He sounds a bit like Gene Marshall at times (and, as friends have noted, he sometimes sounds like your humble blogger my own self), and he's usually accompanied solely by one of those all-in-one keyboards which were so common 40 years ago (although not, as you'll hear, on this record, where there is a guitarist present).

This record also has the distinction of having the lowest label number of any Cinema release yet documented, even lower than this truly atrocious release.

All that is sort of besides the point, but I guess I like to type. The real news is that this record, "Fun in Napoli", is a truly enjoyable little ditty, with corny but good natured lyrics, sung in a stereotypical accent which might be obnoxious, were the entire enterprise not so fun and lighthearted. With Lou Monte, I tend to find this sort of thing unlistenable, but the lo-fi and low-tech nature of this record makes it irresistible to me.

The flip side of this record is called "The Magic of a Song", and while I can heartily agree that there is magic in many, many songs, including the one I just featured before this paragraph, I find none of that magic, or even interest, in this record, behind a minor bit of enjoyment in some of the guitar playing. Ah, well - it's probably asking too much to routinely find two songs to enjoy on one song-poem record.

Actually, one of the more interesting things about this record is the production credit, a rarity in itself on a song-poem record, but especially here, in that each side lists "the author" as a co-producer. A similar credit appears on that other early Cinema release I linked, above. That seems unlikely to begin with, but since the two songs were written by two different song-poets, it seems virtually impossible. I'm also intrigued by the credit to "Action Music" publishers, and wonder if that doesn't indicate a previously unknown link to the Fable/Film City family of labels, which had a subsidiary called "Action Records".

All of that speculation interests me considerably more than does "The Magic of a Song", but here it is, anyway:


Download: The Real Pros - The Magic of a Song
Play: 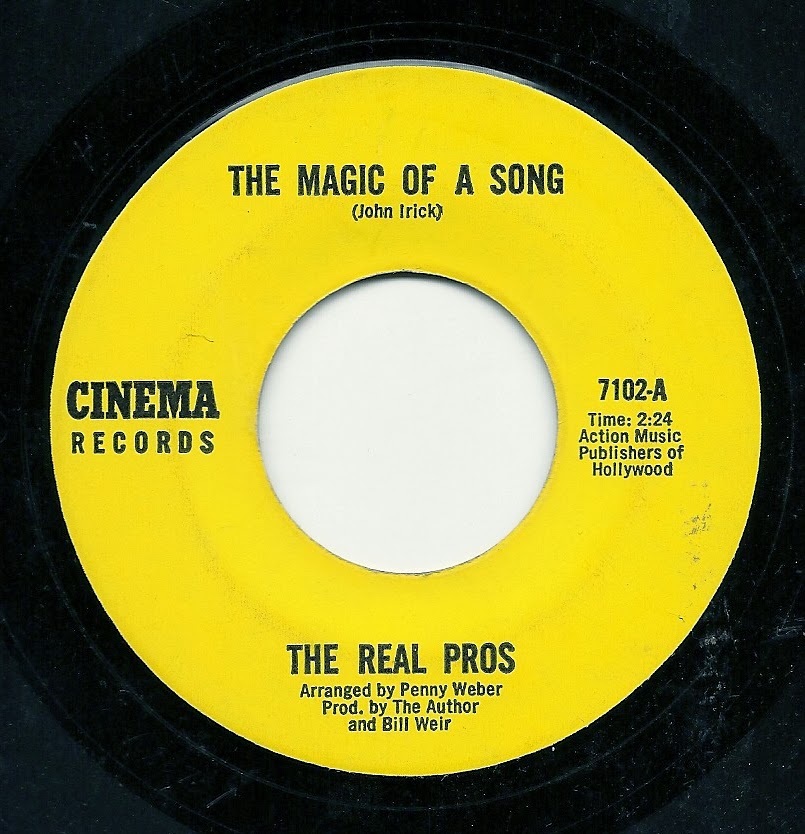 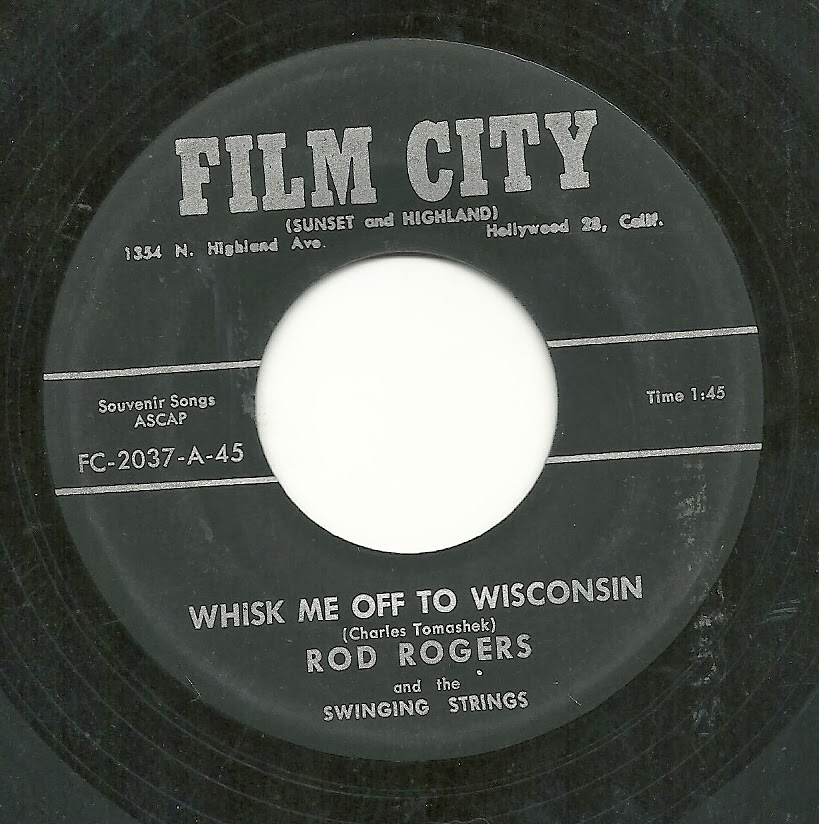 Well, we all had fun last week doing the polka in Arizona, but now it's time to go to a region where polka is something of a local religion - Wisconsin. And here's our friend Rodd Keith/Rod Rogers, along with his pals in the Swinging Strings (as the folks at Film City termed Rodd's five nimble, talented fingers on this recording), in a peppy request, "Whisk Me Off to Wisconsin".

This has everything I look for in a one man band Chamberlin vocal - an upbeat tempo, some interesting choices for voicings on that keyboard - especially the organ-esque fills, the choral 'ooh's' and the string section on the brief instrumental break. The handling of the key change near the end reminds me of a similar turn around in an all time favorite of mine "Go Daddy Go". See if you don't agree!

Download: Rod Rogers and the Swinging Strings - Whisk Me Off to Wisconsin
Play:

In comparison to "Whisk Me", or even if heard on its own, the flip side "Peace of Mind", is a turgid piece of music, with Rodd at his slimiest and smarmiest. I could do without this record entirely - it seems to go on too long, even at barely over 90 seconds. 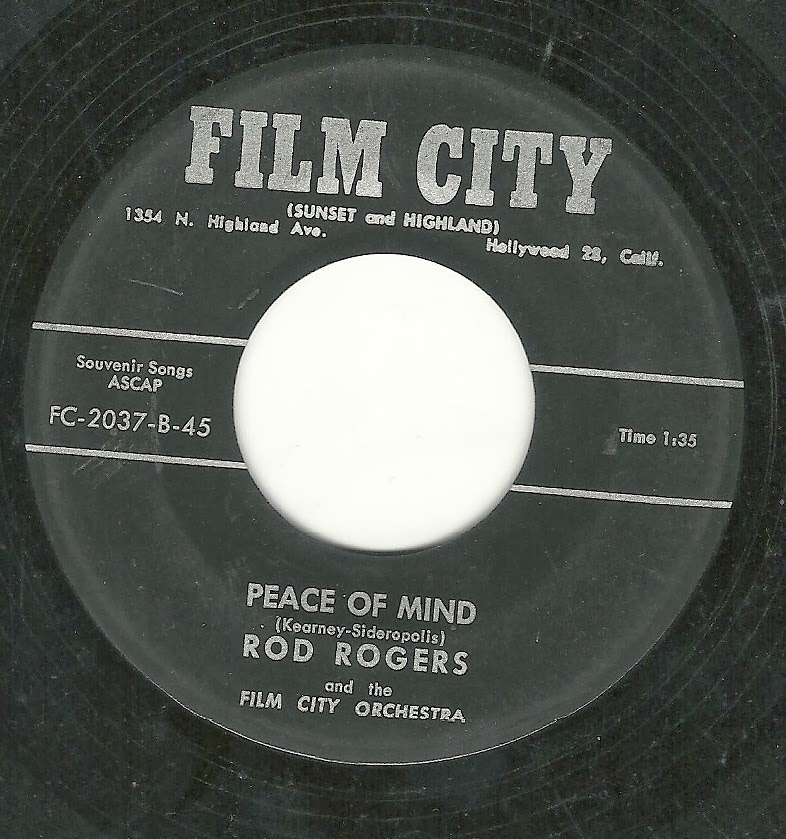 Let's Polka in the Sun!

As promised last week, I'm planning to take a tour around the country via song-poems, and that trip continues today! If I mentioned American cities and areas which come to mind when you think of Polkas﻿, one would likely think of Chicago, Milwaukee, or all of Wisconsin, or perhaps the entire upper midwest.

However, one place not likely to come immediately to mind is the home of today's polka. See below: 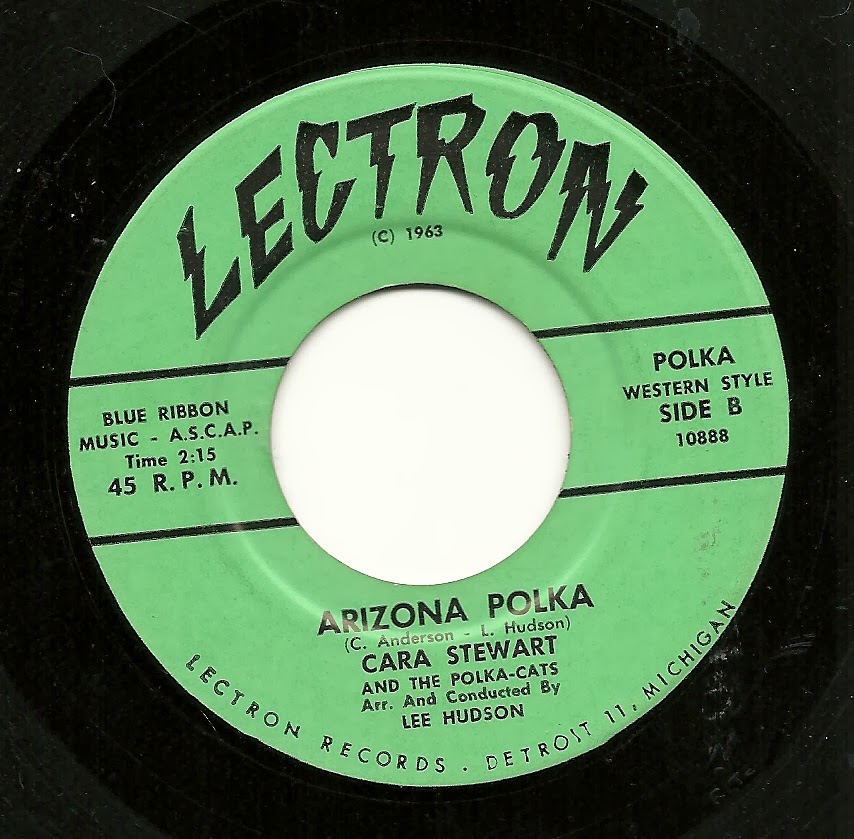 Yes, Arizona. And yes, it's our friends Cara Stewart and Lee Hudson, along with the Polka-Cats (as well as an uncredited assist from Jeff Lawrence), with a delightful pair of polkas, perhaps the best song-poem record I've shared here in many weeks - or at least the equal of "I Liked the Old Year" from a month or so again.

Today's record comes to us via Lee Hudson's song-poem factory, but the tracks were leased out to the tiny Lectron label of Detriot, MI (another place I don't really associate with polkas). Lectron seems to have been the house label for the various song-poets named on this record - all three of them show up as the writers on another known Lectron record.

First, as mentioned, it's off to Arizona, for the Arizona Polka. This is a lovely little record, with a lilting melody, sweet violins, a bouncy rhythm, a neat instrumental break and thoroughly appropriate polka lyrics. There are even some nice backing vocals from the aformentioned Jeff Reynolds, including some well placed "yippees" and the like.

As much as I enjoy that record - and really, really do, I like the flip side, The Whirleybird Polka, quite a bit more. I adore this arrangement, and the detail put into it. As much as it resembles "The Arizona Polka", there are little touches here that put this one over the top, particularly Jeff and Cara in the backing vocals offering verbal encourgement here and there ("'Til You're Full of Pep"), and "yee-haws" in other places.

Perhaps it because the backing vocals remind me of the vocal comments offered up by Jeff Lawrence in between a few lines within the backing track of Doc Nut, one of my favorite song-poems ever. And of course, Cara Stewart is near incomparable among the vocalists of the song-poem world - this record features a typically sexy, upbeat, sweet and sly vocal. She's one of the mysteries of the song-poem world, and I sure wish I knew who and where she is/was. 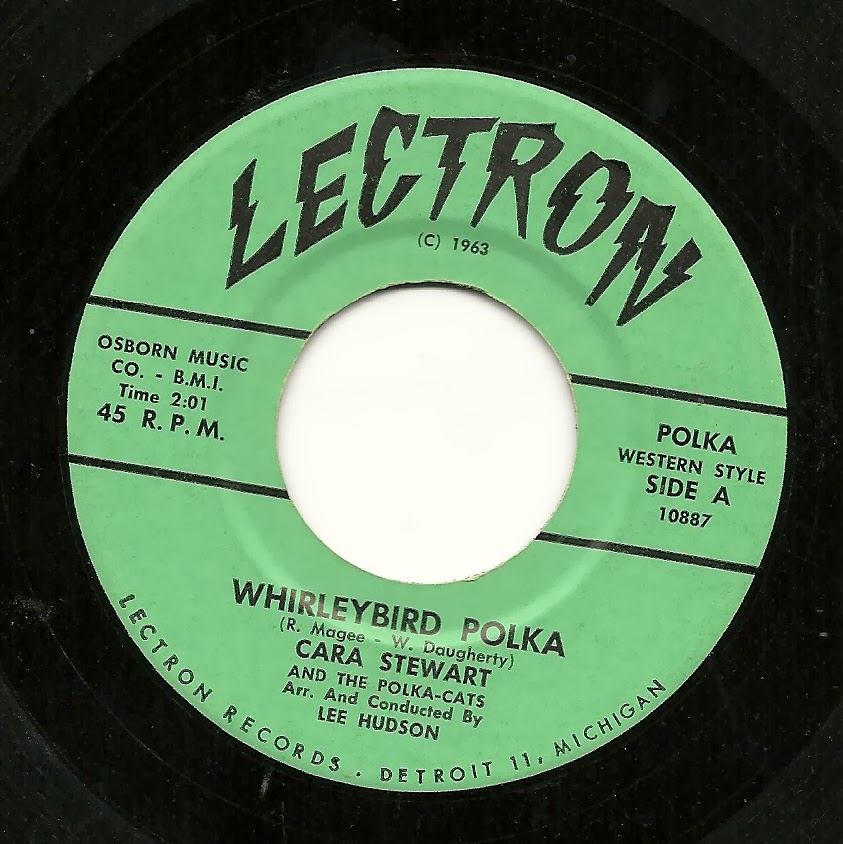 All in all, an absolutely wonderful record!
Posted by Bob Purse at 3:18 PM 1 comment:

Can you believe it's been five years ago this week that I began this project - the years have flown by, helped along at times by the accidental or surprising wonderfulness found in certain song poems, and perhaps dragged out by some of the lesser material I've shared, at other times!

Thanks to everyone who reads these postings, listens to/shares these tracks and/or offers up comments. It's been a great opportunity to share the wealth of my 17 years and counting of song-poem collecting (and, when the spirit moves me, to offer up something else from my 40 or so years of collecting records! Again, THANKS! 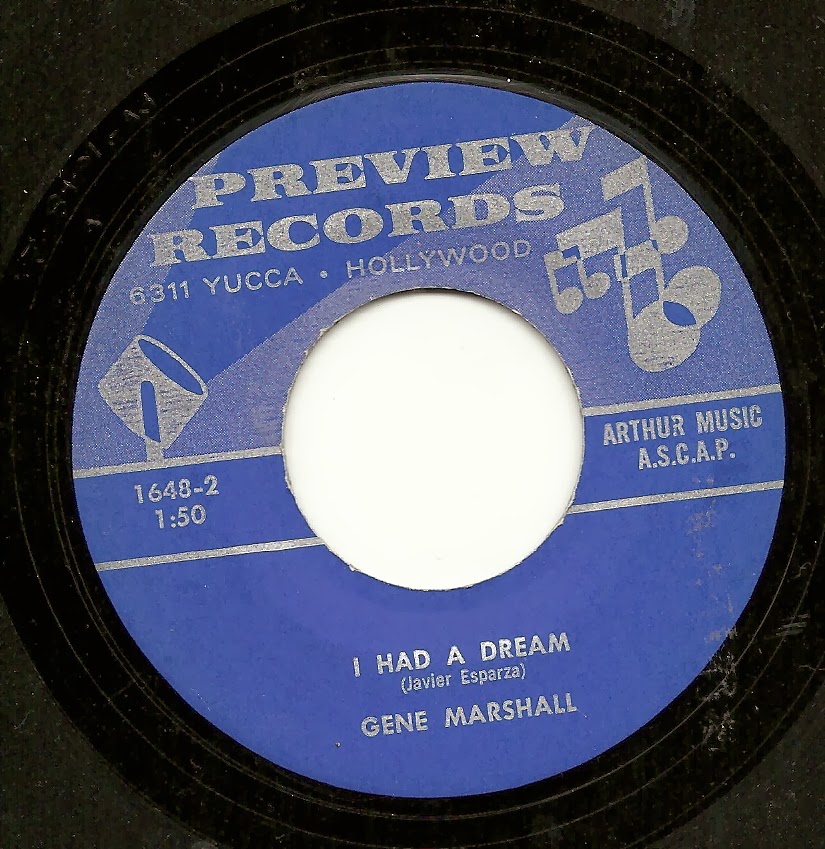 I find that it's been three full months since I featured a Gene Marshall record, certainly the longest that I've gone between postings featuring that golden throat majesty. And here's one which by rights (i.e. the quality of the lyrics) should be just another ho-hum song-poem release - and I wouldn't be surprised if some find it to be just that. But I think it rises a bit above the material, thanks to another stellar vocal performance by Gene, and, especially, a really engaging backing track by the Preview house band.

If you can get past the goopy backing singers at the start, you'll hear a nice, soulful track under Gene's strong reading of the lyrics to "I Had a Dream". The drummer, in particular, makes this track for me - in fact, I've often wondered who provided the frequently excellent drumming on these late '60's/early '70's Preview sides. The guitarist is also doing some really nice things, and I appreciate the piano fills here and there, too. All in all, a much nicer record than it could have been, due to the superior talents of everyone involved.

On the flip side, we have the rather bland stylings of Fred Flagg. Mr.Flagg turns up on a dozen or more Preview waxings, all of which appear to be from between 1968 and 1971, initially billed as Freddie, then Fred. "My Own Home State" has precious little to recommend it (is the statement that "I've Been Everywhere" really justified by listing about a half-dozen midwestern and southern states one has visited?).

But this record does remind me of ALL of the other songs about states and cities which are found on the song-poem 45's in my collection, and I think maybe I'll make a point of doing a song-poem travelogue (as long as the material is interesting), over the next several weeks. 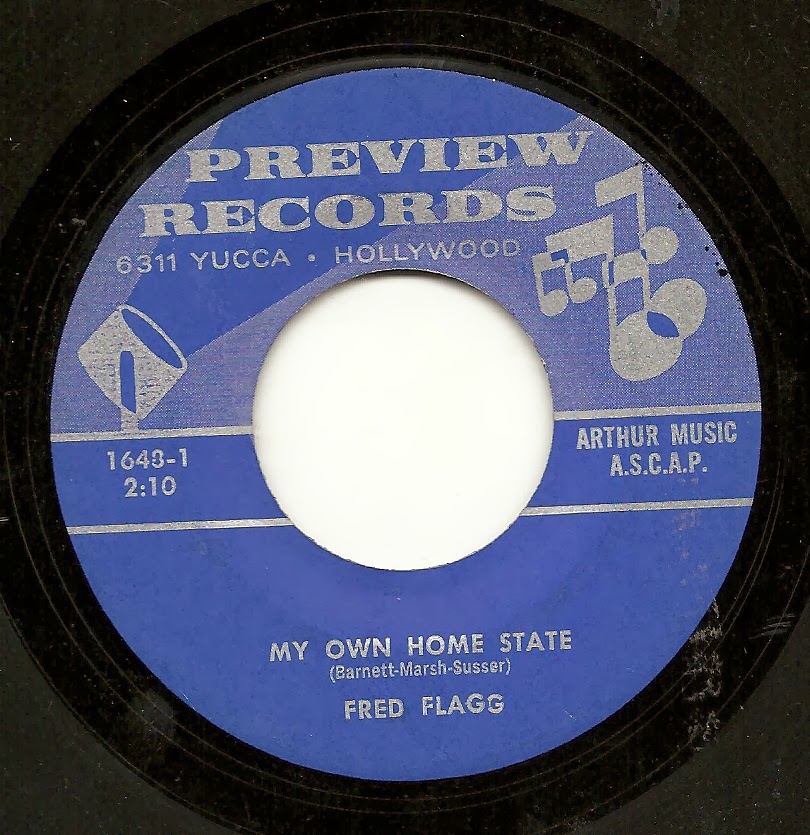