Phil and Don Meet Jimmy and the Boys

Lemme know what you think!

Email ThisBlogThis!Share to TwitterShare to FacebookShare to Pinterest
Labels: Mash-Up's 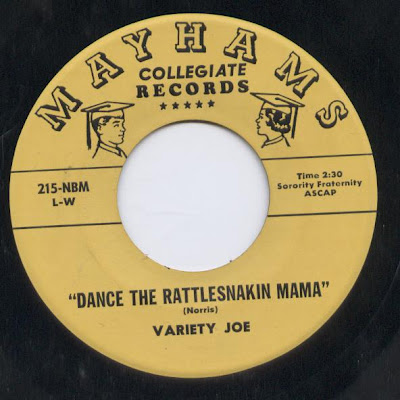 I first heard of song-poems (and heard my first one, "How Long Are You Staying"), when Dr. Demento mentioned the genre in 1993. By the time I got around to trying to order that first compilation album, it was out of print, but instead, I got the second volume (and first CD), "The Makers of Smooth Music". And my first favorite song-poem, by a wide margin, was "The Watusi Whing-Ding Girl".

The insane sound of the track - I had no idea it was a one-man band at the time - had me wondering "what the hell is going on here?" I loved the sound of the Chamberlain, the fact that the drumming was rarely in the same song as the rest of the performance, the melody of the thing, the soulful vocal (with its cracking on one note) and the insane solo section.

While I've never been lucky enough to find a copy of that 45, I have recently been lucky enough to find and purchase a close relative of the performance, and not only that, it overlaps with one of my favorite song-poem stories, that of Norridge Mayhams. For this is a Mayhams Collegiate record, credited to "Variety Joe", but clearly (on the A side anyway), Rodd Keith, in his Film City guise of one man band Rod Rogers.

And while this performance is not as off-the-deep-end winningly bizarre as "Watusi...", it's in the same ballpark. Rod has used some of the same backing settings, including that drumbeat, which for some odd reason, plays the fill every FIVE bars, and in the middle of a measure, at that. Not only that, the drums again get completely off the beat with the rest of the track, and the solo section is again messed up - I think there's an edit in there. And of course, there is the fact that we're being encouraged to do a dance step named "The Rattlesnakin' Mama". Everyone groove!

The other side seems to feature a different vocalist, one I'm not familiar with, although the backing track seems very likely to be another Rod Rogers' special. I love the deep vibrato on that one setting that recurs throughout.

While you're enjoying "You Left Me Honey Honey", particularly the distinctive yelp near the end, please also notice that the songwriter credits on the two sides are different, and yet each is a name used regularly by Norridge Mayhams. Also enjoy Mr. Mayhams' record label design, which is one of my favorites, one which is far better than most of the designs used by major labels over the years. 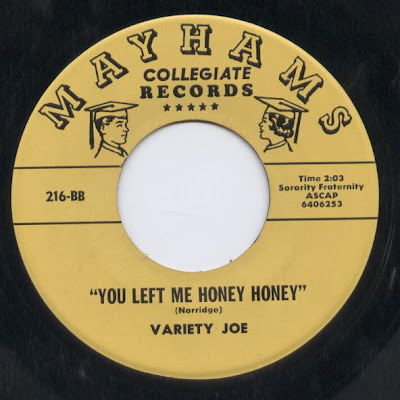 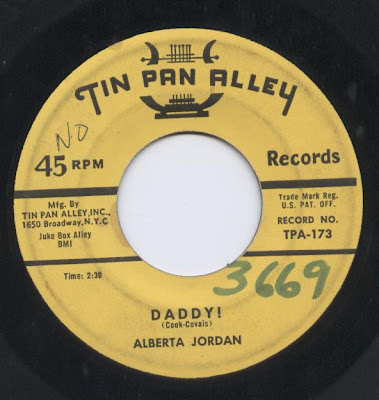 I sure love these 1950's Tin Pan Alley singles. There's apparently some overlap on the early TPA singles between legit releases, vanity pressings and song-poems, and to be honest, today's sample (at least the A-side) seems, to me, too professional and too conventionally "good" to be a song-poem. On the other hand, the '50's TPA records have a fairly high level of performance and production quality, even those which are likely or clearly song poems. And the flip side of this one certainly sounds like a song-poem to me.

So who knows? Regardless, I did want to share this one, "Daddy", by Alberta Jordan, because it's a really fun record, one which should be recalled fondly by people of a certain age, as a favorite big late '50's hit, but of course, that's not the case. I don't know why - who could resist that opening section. You know you're in for something fun. And I find the lead vocal irresistible - dig the sharp intake of breath at the one minute mark! The echo on the final verse is the only clue (to me) that something outside of the norm is going on here.

Side two, as mentioned above, sounds much more song-poemy to me, although I suppose one could also say it sounds like any number of pop hit b-sides from the same era. Here's Alberta Jordan, again, with "Should I Trust You With My Heart": 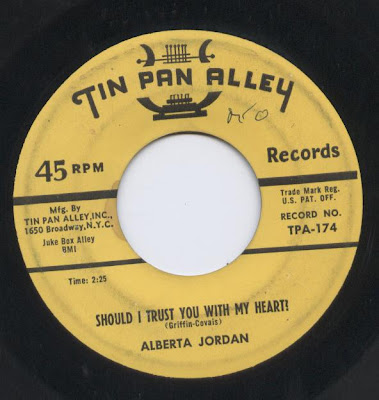 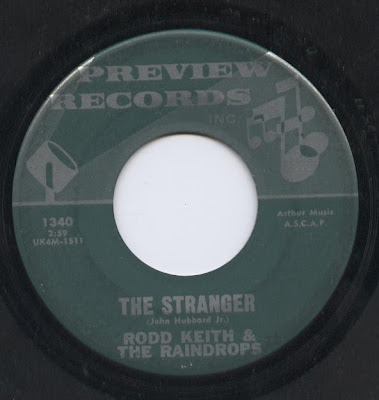 Here's a nice Rodd Keith number, set to a backing track I've heard on at least two of Rodd's other Preview singles. There's a lot to love here, from the opening moment, where you can here the intake of breath (I always like that on a record) to the way the writer shoehorns in a rhyme by mentioning the name of deputy, to the overall (fairly comical) concept of the citizens of a "town" the size of the one mentioned here, making the decision they make at the end of the song. I also tend to really enjoy the Rodd Keith records where he tries to sound like he's a country and western singer. Enjoy "The Stranger":


The flip-side, "Lonely Nights", is a pretty typical early period Preview record - actually, this one doesn't sound too much different from what I'd expect to hear on a failed (or minor hit) MOR record of the period, although there's something about Rodd's vocal (and those chirpy back-ups) which sets it apart just a bit from those major label releases: 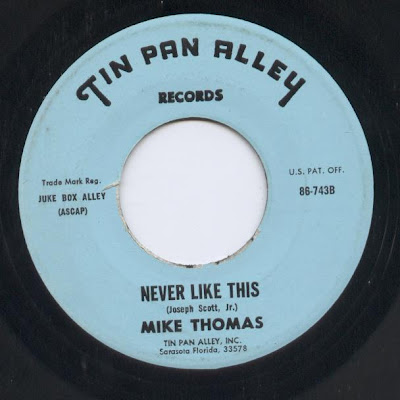 Frequent readers will know that I usually go on, often at length, about the songs I'm posting. Today, I think I'll skip most of that, and let you discover the wonders of this two sided smash for yourself. I will say that I suspect that, were there still song-poem compilations being made, the song "Never Like This" would be a shoo-in for inclusion.

Aside from that, it appears that Joseph Scott, Jr., the author of both these songs, had some major personal stories, if not out and out issues, that he wanted to express through song. Mike Thomas sings both songs for us, starting with "Never Like This":

And now, here's the almost equally fascinating flip side, "My Wife": 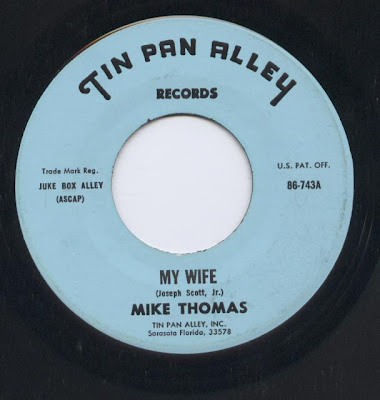