One of the most peculiar records in my collection is an EP on the Film-Tone label. I don't remember where I bought it, but I do remember being pretty sure, upon looking at it, that it was a song-poem record. And I was correct. If you're familiar with the Star-Crest label, and their rather old-fashioned style of song-poemetry (and example of which I posted here, some time ago), you probably won't be surprised by the sound of Film-Tone records, an associated label. Supposedly, within the industry, Star-Crest was known as Star-Crust, due to their outdated style.

On the other hand, as moldy as this style is, the song lyrics are more clever than those of most song poems, and the vocal arrangement actually shows that some thought went into it. No artist was named on this record. Please enjoy Film-Tone's "Flying Saucers":

The second song today is linked with the first song only in that the subject of the song, Nancy Reagan, may have believed in another type of flying saucers, or perhaps in that she sometimes seemed to have originated from outer space. And also, of course, the subject of the first song - marriage - was the biggest reason why Nancy remained famous, after her retirement from acting.

Michael Kasberg, the author of this song, probably deserves a page dedicated to his singularly bizarre song-poem output, of which this is barely a taste. Still, the twists and turns in this lyric, including Gene Marshall's final comment, are worth the price of admission.

This track is taken from a private compilation made by a friend of mine, several years ago, and the beginning of the song is cross-faded with another track by a non song-poem artist. Here's Gene Marshall with "Lovely Nancy":

The Things One Finds On Three Inch Reels of Tape... 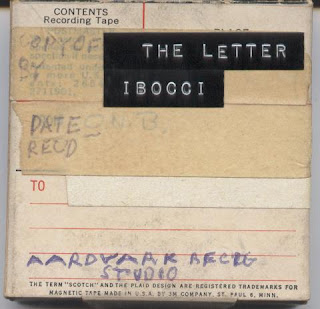 I'm slowly plowing through a large mountain of reel to reel tapes, which I've bought here and there and everywhere, over the years. The pile actually tends to get bigger before I can make it smaller, if you know what I mean.

I was quite taken with this performance, which was the only thing notable on a three inch reel that I recently listened to. Everything I know about can be seen in the copy of the tape package, above. I would assume this was a vanity recording, or at least at the edge of such a definition - perhaps a band who was making a professional quality tape in the hopes of securing some sort of contract.

I'm not sure I'd call this good, but I do find it fairly compelling and very interesting:

I'm at the bottom point of a really bad cold, which is really affecting my eyes this time around, so that I'm trying to avoid computer time. But I did want to keep the project going, so I've grabbed five - count 'em five - MP3's which I made at a point when I was trying to make copies of all of my song-poem holdings (a project that was very short lived), and am going to upload them without much further comment for all of those of you who are particularly fond of Rodd Keith.

I'm not really part of the Rodd cult - I enjoy his records about on a par with any other song-poem artist or label, loving some and finding others deadly dull, and everything in between - but I know I'm in the minority with that viewpoint.

Here are both sides of a rather drippy film city 45. First, "My Dream":

Next up, an early MSR release, "Rock and Roll is Back Again:

And finally, both sides of a Preview single. First, "You - They All Say You". I particularly enjoy the clunky lyrics of this one:

And the flip, "Cry Upon My Shoulder": 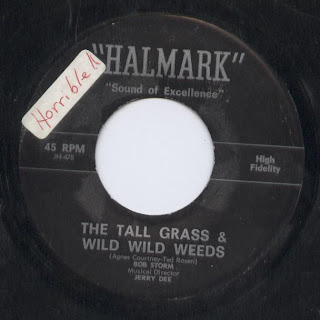 The Halmark label (or, as it the logo sometimes appeared, "Hallmark") is unique among the song-poem companies in a few different ways.

First was their tendancy, on most of their releases, to not name the performer of the songs they released, and instead, to print the names and addresses of the authors of the songs. While that's not the case with the record pictured above, and shared today, it was usually the case.

Second, they bought existing multi-track tapes, stripped off the vocals, and had the Halmark singers sing the lyrics to the song-poems over these tracks. And they often used the same tracks over and over and over again. Often, it appears that the singers are shoe-horning the lyrics into the existing track, with virtually no attempt to either make the words scan correctly or to have the tune sound remotely good.

The whole story of Halmark, for those unfamiliar with it, is explained here, far better than I could ever hope to describe it.

I was lucky enough to find a Halmark 45 which had been sent to radio station, one which came complete with a note from Ted Rosen, the head of Halmark Records. Whoever listened to this record had excellent taste, as he or she made a point of attaching a label (as you can see above) marked "Horrible!!" to each side of the 45. And yet someone kept it.

Here is the letter from Ted Rosen: 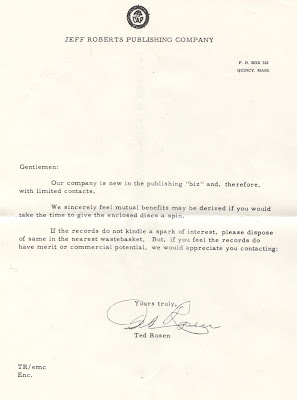 Another interesting thing about this record is that both sides are credited to Bob Storm, one of the three singers whose work makes up the bulk of the vocals on Halmark's 1970's 45's. A quick listen to "The Tall Grass and Wild Wild Weeds" will immediately throw doubt on the notion that Mr. Storm is the vocalist:

However, I've no doubt he is the vocalist on the flip side, which is called "Their Destiny", and which is easily my favorite of the two. I just wish I could be with each of you, in front of your respective computers, as you hear the first notes of Bob Storm's vocal, and as you hear his stirring tribute to "great men, of various hues": 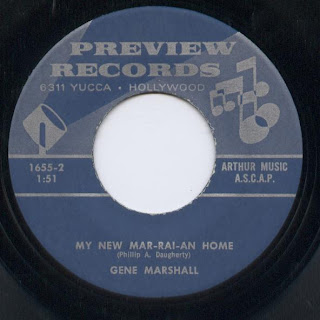 Just a few words today, due to lack of time to say something more profound (or perhaps just more wordy).

Today, two recent song-poem acquisitions, one that I like a whole bunch, and one that doesn't do much for me musically, but has an great '70's title and lyric. The only thing that ties them is that they both have really great out-of-left-field titles.

Here's a space-age related song-poem by one of my favorites, Gene Marshall. Bounce along with Gene and the gang as he sings "My New Mar-Rai-An Home":

And here is a latter day (1975) incarnation of The Real Pros, singing that all time favorite, "Oh, My Man of Virgo":

Incidentally, a few folks let me know that the link on a recent song-poem post, "Playboy's Paradise" was broken. I have fixed it. 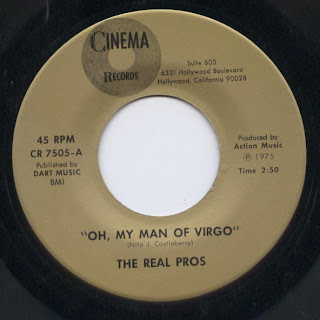 Email ThisBlogThis!Share to TwitterShare to FacebookShare to Pinterest
Labels: Gene Marshall, Preview, Song Poem of the Week, The Real Pros

Perhaps Not the Worst Thing I've Ever Heard On a Vanity Record...

...but it's fairly close. Here are both sides of a record by Mr. Cal Andrews. I know virtually nothing about this, aside from the fact that it was released on Ink Records. I assume it was a vanity project, but I could be wrong. This was floating around in cyberspace one recent day, and I reached out and grabbed it. I got it just in time: the next day, the download was gone.

The A side is titled "Sundown at Sea". I'm particularly fascinated by the drumming on this track:

The B side, my personal favorite of the two, is "O Sing to Me". On this track, what most catches my ear, even beyond the mind numbing singing, is the bass player, who appears to be under the impression that he is in a different song altogether:

My younger daughter shares my tastes. She was in the room when I opened and played "O Sing to Me" for the first time. She asked if she could have it on her iPod....