"Ditto and the Marks"

AAARGH! Divshare is again screwed up. One can upload files, but not share them. So I'm back to a temporary fix. 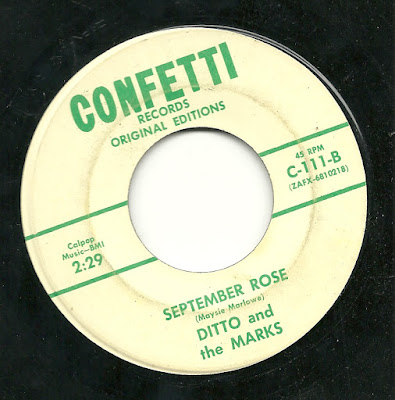 Here's an interesting record, at least for those into song-poem minutiae. I'll wait while the rest of you leave. Here we have a previously uncatalogued song-poem label, featuring an previously unknown song-poem performing act, the goofily named band "Ditto and the Marks". Indeed, were it not for the acts on the flip side (song-poem mainstays Cara Stewart and Lee Hudson) I'd have not thought this was a song-poem record, and were both sides not written by the same person, I'd have thought it was a hybrid song-poem/vanity release. What evidence there is, though, points to both sides being true song poems.

The record is not really anything special, and the record is in borderline horrible condition, but it interests me for the reasons alluded to above, AND because the lead singer of the group bears a distinct resemblance to the unknown guy featured on all of those one-man band records from the early days of Cinema's "Real Pros" releases, several of which I love. You can hear a few of those here, here and here. Does anyone else think it might be the same guy? What a tangled song-poem web was woven!

Ditto and the Marks - September Rose

On the flip side is another typical Cara and Lee speciality, fitting in chord-wise, arrangement-wise and vocal-wise with 85% of the other records that they produced, and to me, that's a very good thing. I couldn't listen to eight of these in a row, but hearing one a day would probably take a long, long time to get old. One song-poem mystery I'd love to solve would be: who was Cara Stewart, and where (if anywhere) is she today. She was wonderful. 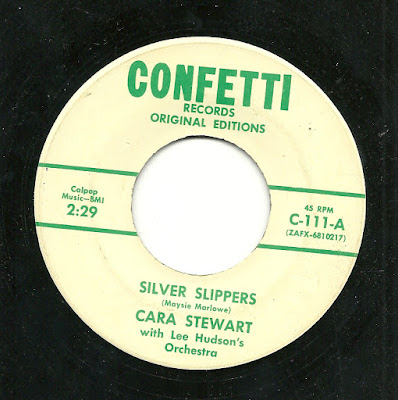 Email ThisBlogThis!Share to TwitterShare to FacebookShare to Pinterest
Labels: Cara Stewart, Confetti, Ditto and the Marks, Song Poem of the Week

A Bit of a Mystery

As I've probably mentioned almost every year since starting this project, the middle weeks of May are the busiest of the year at our house, for a variety of reasons. The two graduations just added to that craziness, and I ended up skipping a full week for reasons not related to technical problems for the first time ever. I'm going to try and get back up to speed over the next week and a half with two more posts. But first.....: 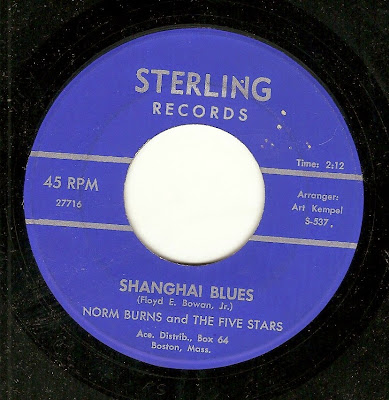 Before I get to the mystery mentioned at the top of the page, here's the (much) better of today's two songs, which is offered up by our old pal Norm Burns. It's titled "Shanghai Blues", which is a misnomer for at least a couple of reasons. First, that specific combination of words is never said during the lyric, and second, the music is about as far away from Blues as I can imagine. (A side note - what is the word that Norm sings before the word "Blues" in the chorus?) All that said, I enjoy this bouncy, peppy (if also slight) little number, and hope you will, too.

On the other side, it's a whole different story. As far as I can tell, the artists involved, "Victor & the Trophies", never showed up on any other song-poem release that's documented (in fact, a search for that phrase turns up only one hit - the AS/PMA documentation of this record!).

What's more this sounds NOTHING like any other Sterling record I've ever heard. It sounds to me far more like the stuff that the MSR crew were turning out in Los Angeles for both the MSR label (under their own (or assumed names) and Cinema (under the name "The Real Pros). There is none of the crisp guitar, minimalist band arrangements or any of the known Sterling singers on this record. Instead, it has the muddy, half-assed sound (in my opinion, anyway) sound that the MSR folks produced more and more as the '70's wore on.

On the other hand, I don't recognize any of the vocalists here as sounding like an MSR regular, it seems unlikely that a label in Boston which did things in house would team up with an LA crew, and the devolving of the MSR/Cinema sound I'm referring to really started to devolve after Rodd Keith's death in 1974, and this record is from 1971. So maybe it's just a vanity record that ended up pressed onto a Sterling disc, written and recorded by some local band. I really have no idea.

Download: Victor and the Trophies - The Melody of Love
Play: 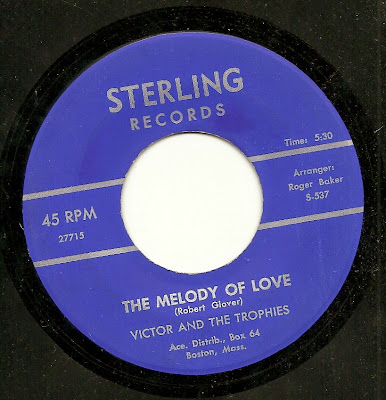 Email ThisBlogThis!Share to TwitterShare to FacebookShare to Pinterest
Labels: Norm Burns, Song Poem of the Week, Sterling, Victor and the Trophies

Songs for Mother and Daddy 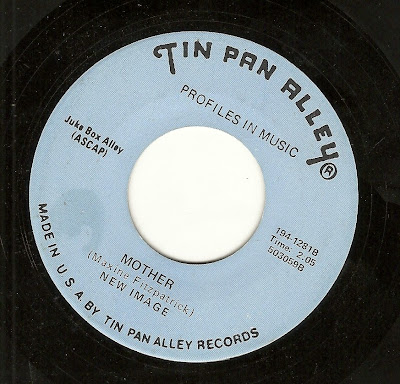 So, rather than blather on about what I have to share for Mother's Day, I'll just say that here's a perfect song for anyone out there who is a mother, or who has a mother. It's our Tin Pan Alley friends, the band "New Image", with a song simply titled "Mother".

And on the flip side, here's the same song-poet, the same band and the same label, offering up a tribute to that other parent, "A Friend is Daddy". 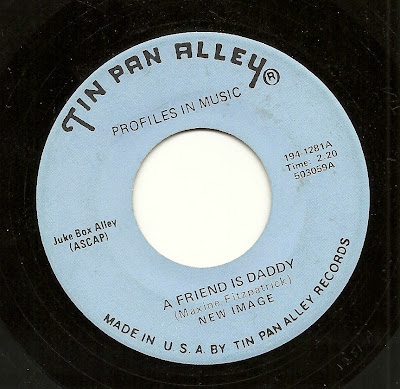 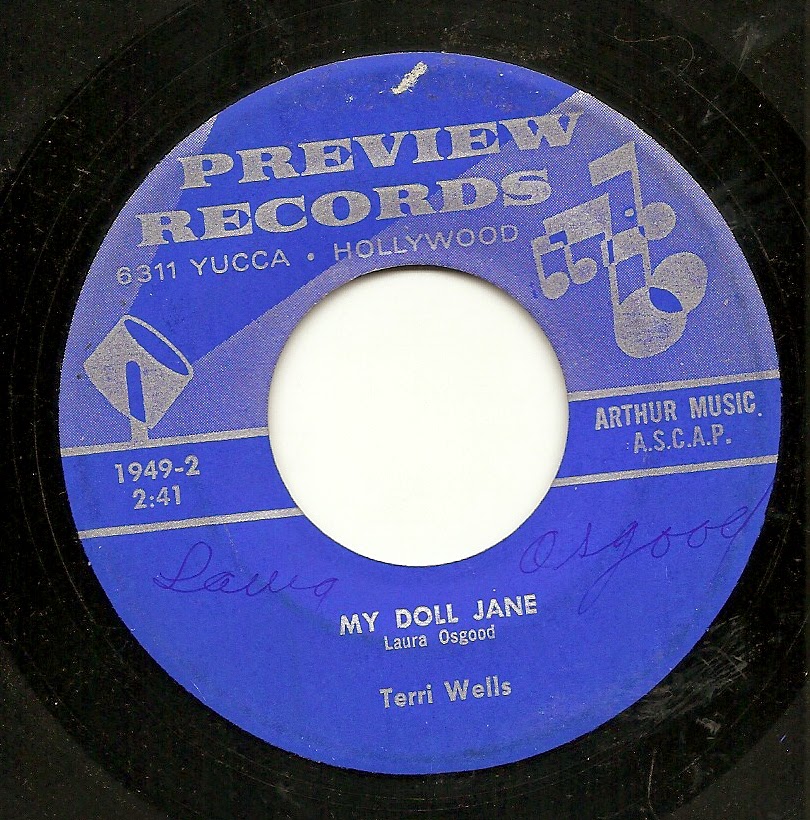 Divshare was down for another full week, at least in terms of being able to upload anything, immediately after the date of my last post. Sheesh. Anyway, that's why today's post was delayed. And if you've come this far, I encourage you to listen, because "My Doll Jane" is a doozy.

And I'm not going to say much about today's featured side, except that it's by the otherwise unknown Terri Wells, who is not confirmed to have appeared on even one other Preview side, and that it's lyrical content is several kilometers past completely bizarre.

I won't write a word more about the story Ms. Wells is going to relate to you, but if it makes more sense to you than it does to me, or if you just want to chime in with your own "what the hell", feel free to comment. I'd love to hear what others think of this one.

The flip side is a performance of "Helen Goodnight", sung by Gene Marshall. The lyric was written by someone named Helen - perhaps she wrote that which she was wishing her lover would say to her? This is a pretty forgettable record, to my ears, notable only for a really nice opening nine seconds, much of which would probably sample-able, and, even more notable, a rare complete flub from Gene Marshall, who comes in after a key change away from and back to the original key change, at 1;47, and is, for a moment, nowhere near in the same key as the backing. It would be jarring with anyone, but to hear Gene completely lose is startling.