Big Belly Berelly, Trouble with Girls, and a Bit of Plagiarism

I will resume the correction of old posts next week. With the holiday week that is now coming to an end, I've had little time for online activities. I hope that today's wonderfully odd new items will make up for this lack of old fixes. 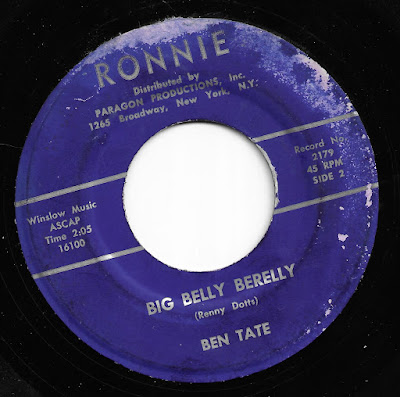 This one literally arrived in the mail yesterday, and I couldn't wait to share it. I think each side is good enough to be featured first, but I've chosen the one with the more unusual title and subject matter to go first.

The singer is Sammy Marshall, under the name of Ben Tate, which he used on all of his releases on the Ronnie label. I've usually found Ronnie releases to be staid and way too glossy/bland, but both sides here prove to be an exception, with approximations of someone's idea of what the rock and roll of the day sounded like.

And so here we have "Big Belly Berelly"! Now there may be a way to make that title phrase fit musically in a way that a singer could make it work, rhythmically, but the folks at Ronnie did not find it, as you'll hear. Then there's a line like "Though he wasn't educated", which would be hard for Irving Berlin to make into something musical.

Everyone involved does the best they can with what they were given, and I suspect that someone who didn't speak English might well believe that this was a legitimate release by a label shooting for a hit record. Then again, this record appears to date from about 1965 or 1966, so perhaps not.

The second thing I noticed about this record was that it opens with a blatant and completely unnecessary bit of plagiarism. Not only have the folks at Ronnie quoted a key melody from a number one song from earlier in the decade, I can't figure out why, as going forward from that point, they didn't make that melody part of this song's melody, and, in fact, the chord changes for "Girls Are Trouble" never matches that melody, or the earlier song, for the rest of the record.

Aside from that, this is another faux 1963 style rock and roll record, more obviously song-poemy this time in terms of the performance - complete with uninspired sax and guitar solo, followed immediately by a bum note on the bass - although Sammy tries his best to sell it.

And that opening still cracks me up. 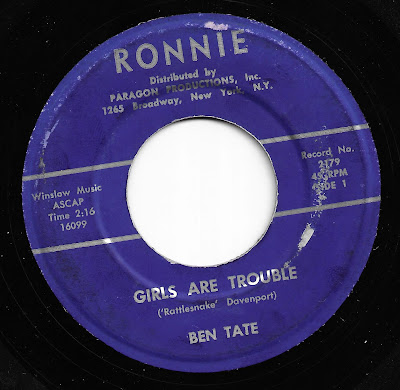 I Certainly Hope It's Not Ivanka

I'll get to the meaning behind that post title in a moment, but I wanted to offer up links to this week's group of corrected posts from the past, in this case, July 2014's posts. This was a nice cross section of interesting song-poems, ranging from a nice "Rodd Rivers" Chamberlin track, to a Halmark record credited to Bob Storm but only featuring one side which might have been him, to what might be Norm Burns' last release, to a sexually charged Gene Marshall record. Enjoy!

I also want to acknowledge that my great pal Stu has some doubts about my crediting a song in this post (from last month) to Rodd Keith. He's skeptical that it's Rodd (and he's a much bigger Rodd Keith fan than me), so I'm wondering what others think. 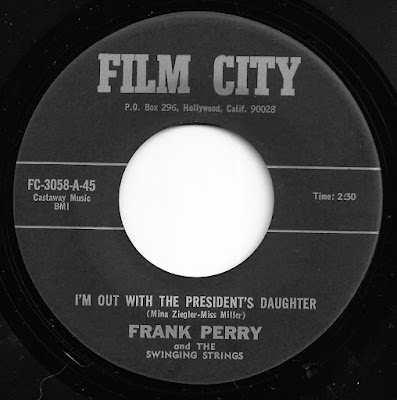 Today, we have two genuinely peculiar lyrics from the pen of one Mina Ziegler, who teamed up with someone named "Miss Miller" for the better of the two entries. That entry would be the charmingly off-kilter "I'm Out with the President's Daughter". I get the distinct feeling that one of the lyricist here simply felt that was a lyrical concept too good to pass up, and then worked to settle on a lyric with which it might (barely) fit, as the title line seems to me to come out of nowhere, does not rhyme with anything, and strikes me as barely related to the rest of the song's story.

The Chamberlin backing track is appropriately whimsical, and Frank Perry's voice is perfect for the little story. But my two favorite things may be the use of the phrase "Scot Loose", which as far as I knew (and as far as I can find online) is not actually a phrase, and the fact that the song both fades out and has a hard ending (which can barely heard because the song has been faded). This is only the second record that I can recall where that happens.

Download: Frank Perry and the Swinging Strings - I'm Out with the President's Daughter
Play:

(By the way, the other one that fades out on a hard ending, an all time favorite (pre?) teen girl song from Alaska (!) can be heard here.)

The flip side is called "Painting Done in Oil", another left-field sort of lyric, in this case one which seems designed to fit as many references to different styles, methods and genres of creating artwork as possible, each in reference to the quality and stability of a relationship. The results are not particularly musical lyrics, and the song stumbles several times over words and phrases such as "surrealist" and "depth and scope". If nothing else, it's an interesting choice.... 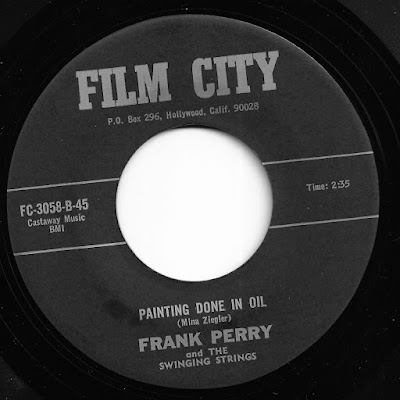 The Return of Gary Roberts

First, I have - as promised - gone back and updated yet another month's worth of previously damaged posts, in this case, the month of August, 2014, which featured three posts: an odd late-era Film City release sung by Jim Wheeler, three quarters of an Air EP (the missing song explained in the notes), and a sort of wonderful 1950's Tin Pan Alley number.

With that out of the way, here's what this week's record looks like: 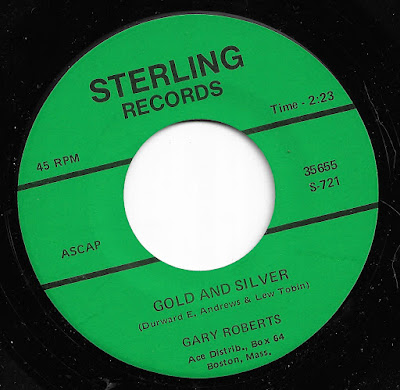 One of my intentions at this site is to document virtually every Gary Roberts record that I come across. Not because he was a great singer - based on the evidence, he wasn't even a good singer. Not because his records stand out as song-poems - but rather, just the opposite. They are, with a couple of exceptions, utterly prosaic. Gary Roberts and the majority of his releases are exactly what I would describe as the average song-poems: badly written lyrics, corny, unimaginative music and barely competent (if that) singing.

Plus, it's worth noting that, for song-poem fans who discovered the genre during a certain era, Gary Roberts' voice was the first one they ever heard singing a song-poem. His rendition of the utterly amazing "Do You Know the Difference Between Big Wood and Brush" led off the first vinyl reissue of song-poems, and the subsequent first CD re-issue of song-poems, back in the '90's, and I have it on good authority that "Big Wood and Brush" was the single most popular song-poem among those who discovered the genre via those re-issues, back in the 1990's and early 2000's.

For both of those reasons - the fame of his biggest "hit" and the utterly stereotypical-ness of his oeuvre, I want to spread the joy of a Gary Roberts record whenever I find one. And it's been over a year and a half.

Today's song is "Gold and Silver", a record that fits everything I just said about this artist and his work at the Sterling label. An added minus is the truly awful sound of the pressing. "Gold and Silver" shows precious (heh) little creativity in any area, and features just enough poorly phrased lines and badly structured music to keep things mildly interesting.

An appropriately loping beat introduces the flip side, "Cowboy's Song of Oregon". The lyricist has had enough of those New York rodeos (?), and will resume the Cowboy life as practiced in Oregon. Is it my imagination or does this side seem to be slowing down, to the point where one expects it to stop any time, on a couple of different occasions? 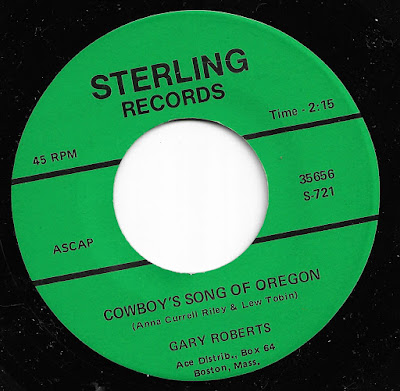