It's All Elvis' Fault

I love calypso music. Over the last several years, I've come around to the way of thinking that says that, at least in its original Trinidadian form, calypso may be the most perfect style of music ever developed by humans.

Today's example is not part of the Trinidad tradition, and by its subject matter, quite clearly comes from the great mid-1950's revival of calypso. It's also more cute than it is "great" or "perfect".

What little I can find out about this group, which went by the rather unweildy moniker of "The Fabulous McClevertys", is that this was in fact, the family name, and that the band was, for a time, the backing combo for the little known Calypso performer "The Mighty Charmer", a violinest and singer who later abandoned music and became better known under the name Louis Farrakhan.

Each side of the record fits one of Calypso's typical subjects, with the A-side being quite topical, and the B-side being about one aspect of (as a great Calypso compilation once described it) "the human condition".

I was rather surprised to find that this single was on Verve, a label associated at the time (1957 or 1958) with some of the best Jazz being made, and additionally, a bit later, with cutting edge comedy. 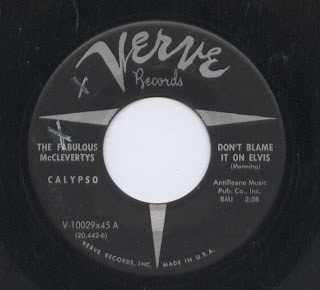 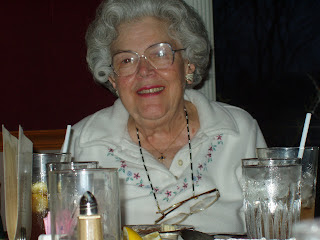 Well, there's been no activity here for some time, and that's almost entirely due to the death of my mother at the end of last year, after a series of illness over the past few years.

I've written about her before, and rather than go into any great detail, since this is a music blog, and if I can indulge a bit, I thought I'd just share some of the music I was lucky enough to hear, while growing up, as well as one song I had the pleasure of introducing my mom to, and playing piano for.

First, two acetates, both of which I believe are from around 1944, when she was perhaps 20 years old:

A Broadway standard, recorded in the late 1950's:

A more gorgeous piece you're unlikely to find, than "Shepherd on the Rock", heard here from 1959. This is admittedly quite lengthy, but I love it. There is an unfortunate splice right near the end of the piece, which cuts out a few moments of the big finish:

The following version of Mozart's Alleluia, recorded around 1965, was played at my mother's funeral:

And finally, a song by William Bolcom, which became mom's signature piece near the end of her life, particularly once her days as a soprano soloist were coming to an end. That's me fumbling around on piano, and the picture below this link is of the two of us, performing the song (not the same time as this recording) at mom's 80th birthday party: 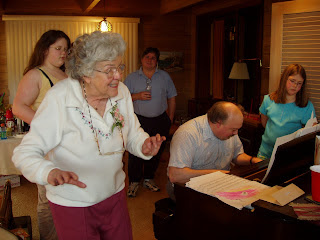 Thanks for everything, mom.
Posted by Bob Purse at 9:26 AM 3 comments: