"The Suffering of a Serviceman's Wife" and Other Overwrought Titles

I'm back!!! As I've probably written nearly every year, the month of May is about the busiest one there is in my life - particularly the third week of the month, and as a result, I often end up posting less in May. Such is the case this month, with only two postings. But on the other hand, both were of EP's, so there's been a total of eight songs shared, and that's something.... 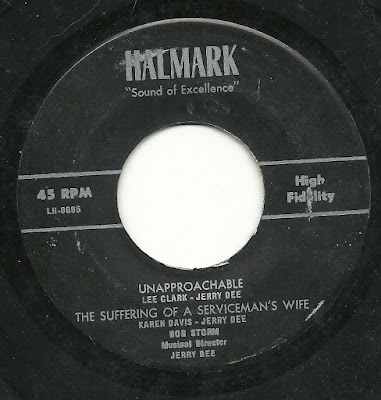 The folks at Halmark certainly received more than their share of portentous, overwrought lyrics. On the AS/PMA website, Phil Milstein made a guess that this might be due to where Halmark tended to advertise - in "Writer's Digest" - perhaps pulling in a far higher number of people who thought of themselves as having great potential as serious authors and lyricists.

Whatever the cause, ridiculous, ponderous and pretentious song titles and lyrics abound on Halmark records. But never have I seen quite the collection of song-titles as came to me on this EP. Making all that much funnier is that all four tracks are attributed to Bob Storm, Halmark's resident over-the-top baritone (heard in my last post, as well), while in fact only one of the songs here seems to be sung by the singer typically labeled as Bob Storm - in fact, two of them have a lead vocal sung by a woman.

First up, the only true Storm vocal and the one with the least over-done title, is "Unapproachable". For that latter reason, it's probably the least interesting of the four songs to me.

Now, le'ts get to those juicy titles, starting with the one reference above. This is yet another Vietnam-related number, titled, yes, "The Suffering of a Serviceman's Wife", sung of course, not by the identified Bob Storm, but a female vocalist. Seems her man's been wounded over there, and she considers him "half a man".

The song is full of such musically flowing phrases as "fighting for something you thought had a good cause" and "I was expecting to see the same smiling face". Certainly there is good material to come out of this situation - and such songs exist. But this author comes off as petulant and irritated that the army gave her a different person than the one who left her - which I guess is to be expected with this title - his own struggles are pretty much a side note until the final line.

Download: Labeled as Bob Storm - The Suffering of a Serviceman's Wife
Play:

Our favorite female Bob Storm is back again for the Broadway-esque 6/8 thang whimsically (and perhaps a bit less ridiculously) titled "Honeymoon on the Moon". In recent years, some of us have discovered that several of these mysterious Halmark backing tracks are actually dead ringers for existing songs' arrangements, including those for "By the Time I Get to Phoenix" and "Gentle On My Mind". I'm guessing this is another one, but can't put my finger on the song.

Anyway, this one works a bit better, to me, than the other three songs here, because it's at least a bit peppy, and the lyrics are actually a fairly decent match for the backing track and singer, although I'm thrown a bit by the female writer mentioning "my pretty bride and me", decades before that was a possibility. Again, not that any of this means I think this is very good, but it's definitely less "bad" than the rest of this EP.

Download: Labeled as Bob Storm: Honeymoon On the Moon
Play:

Finally, there is the uniquely titled "Trench Coat, Umbrella and Boots", sung, again not by the man typically called "Bob Storm", but by the Halmark stalwart usually billed as "Jack Kim" - although this is not the only time his vocals have been identified as Storm, or vice versa. But since Jack Kim had a career under his real name, it's at least known that this "Jack Kim" is a match for the similarly named real singer behind the pseudonym.

Over one of the most stodgy and overused Halmark backing tracks, he sings a pathetic story of a pathetic feeling man, with the requisite un-musical phrases such a title would suggest - I'm particularly fond of "Walkin' in My Teardrops..." 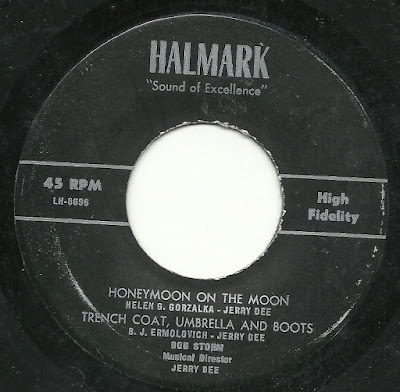 I've commented on the Brosh label before. I've never seen a Brosh release which features material that wasn't either a vanity pressing, or clearly from another song-poem factory - it's quite possible that they didn't do anything "in-house" at all. Similar to Air Records (whose label Brosh sort of resembles), most Brosh releases, including today's EP features singers who are well known to have worked for other production houses, specifically, Bob Storm at Halmark, Sammy Marshall (credited here as Sonny Marcell) at Globe and Cara Stewart with Lee Hudson's operation.

In some cases, records of the same some have been found on the Brosh label and on whatever label the song was originally produced by, sometimes with the latter having noticeably better sound quality. Even when a non-song-poem song shows up on Brosh, there is typically some record of the same material showing up on a different label, as well, and as I mentioned, most of these look like vanity pressings. (I will mention that AS/PMA documents that Brosh released the same songs, with two different label numbers, featuring backing by Floyd Cramer and Chet Atkins, but even those songs are known to have been released by another label, as well.)

What a weird label. I sometimes wonder what the average record collector thinks of a Brosh or Air release, upon listening to the haphazard, clearly unrelated material on one of their EPs or singles. 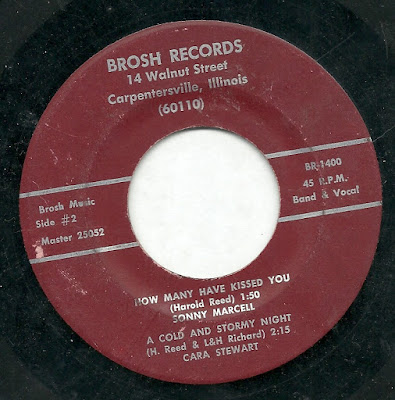 Today's first offering is definitely one of those with abysmal enough sound that it seems to be mastered directly from another 45. Even the surface noise is noticeably different than that of the song which follows it moments later on the same side of the EP. That's too bad, because "How Many Have Kissed You" is a fairly peppy, countrified Sammy Marshall performance, with some effective guitar picking and a lilting melody. I'd like to hear this from a clean copy.

Download: Sammy Marshall - How Many Have Kissed You
Play:

The title of this post, though, is in reference to song two, "A Cold and Stormy Night", which is by far the most interesting lyric and arrangement here. The song-poets wrote what could have been a fairly harrowing story of a soldier's experience in Vietnam. I say "could have been" because it doesn't really work. First, the lyrics are hackneyed and obvious - exactly what you'd expect the average person on the street to think a soldier's experiences and thoughts would be. Second, the big lyrical build-up ends with a piece of fiction that can best be labeled "wishful thinking", and ruins whatever emotional resonance the earlier lyrics had delivered.

But the biggest mistake here was when the lyricists sent their poetry to Lee Hudson, who set those words to one of his sultry, romantic, Les Paul-esque backings for the equally sultry, echoey and dreamy vocals of Cara Stewart. I can hardly think of a song-poem where the lyrics and the arrangement/singer/performance were more of a mis-match. See what you think:

I don't have nearly as much to say about the tracks on the flip side of the EP. The oddly titled "Drop Me Love" is yet another unctuous performance by Bob Storm, over vapid music, as is so often found on Halmark releases. Come to think of it, Bob Storm and Halmark probably could have given a much more appropriate and performance to "A Cold and Stormy Night" than Lee Hudson and Cara Stewart. Not that I believe it would have been good, you understand, just better matched to the subject and material.

We end up where we began, with Sammy "Sonny Marcell" Marshall, with another track with terrible sound quality, this time without much, musically speaking, to distinguish it. It's Sammy in sad-sack mode, which he inhabited far too often, as he warbles about being "On Your List of Broken Hearts". 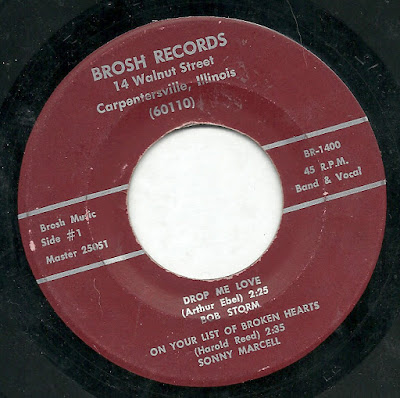