As promised, here is yet another vintage song-poem ad, dug up, rescued and sent my way by a reader named Pete. This one is from 1948. THANKS!

And now for something completely different: 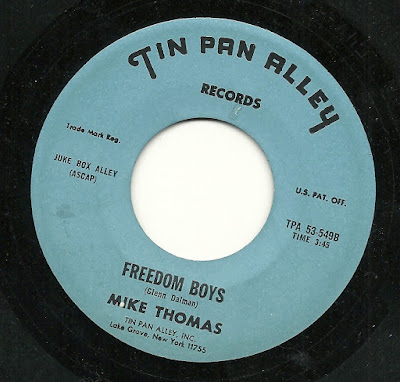 I'm not going to blather on much about this week's feature. Suffice it to say that it is a Vietnam era Tin Pan Alley release, with some truly meaningful thoughts about those who have given their lives for freedom, mixed in with some equally misguided thoughts about the need for our soldiers to have been in Vietnam in the first place, all set to a plodding pace and a rote reading. I'll also throw in that, at nearly four minutes, it's unusually long for a song-poem.

On the flip side is a tremendously peppy number, titled "Too Young". I think the lyrics here are about wishing to pursue the girl of his dreams at age 17, but not having the will to do what he thinks it takes, although there's enough vagueness here that I realize I may be missing something. 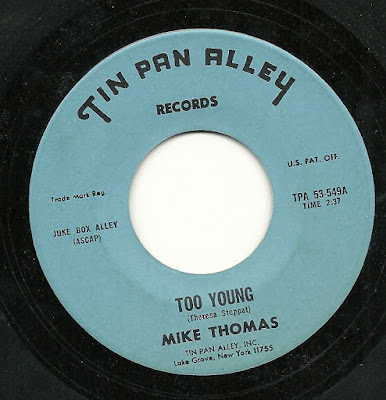 Howdy, y'all,
First, it's time for my yearly explanation that the middle of May is exceptionally busy around our house, which is why it's been a long time since I posted.
Second, here is the second of our vintage song-poem ads, courtesy of "reader Pete" who sent them to me several weeks ago. I'm intrigued by this one, in that it's from a 1943 paper, and yet uses the name "Cinema", which was a prominent Song-Poem label from the early to the late 1970's (and only during that period). I wonder if there's any connection?﻿

And finally, now, a little Rodd for your Thursday: 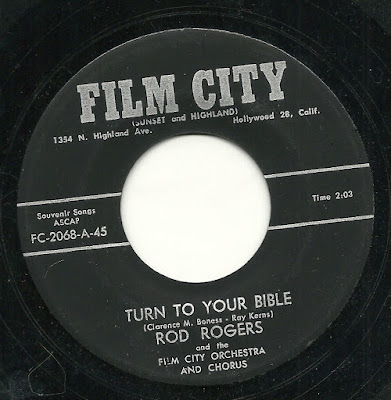 Here we have two religious lyrics, both sent to the good folks at Film City by frequent lyricist Clarence M. Boness, whose work I've featured here at least three times before, in what were largely lyrics written in tribute to the military. Here, he has in mind an even higher power than the U.S. Army, et al. And who better to give these songs musical life and power, but Rod Rogers (Rodd Keith), who had a background which included some Gospel singing himself.

I much prefer the side titled "Turn to Your Bible", which has a bouncy beat and is generally peppy, which its flip side decidedly is not:

Download: Rod Rogers and the Film City Orchestra and Chorus - Turn to Your Bible
Play:

While listening to the flip side, "Take Over My Life", the word that came to mind was "Turgid".

Download: Rod Rogers and the Film City Orchestra and Chorus - Take Over My Life
Play: 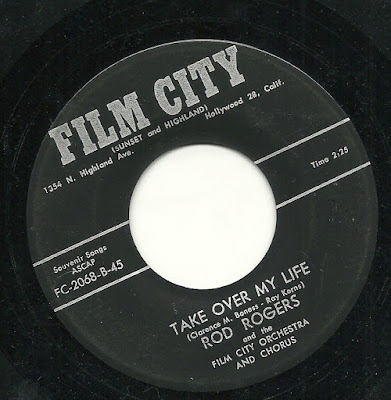 I'll be back on Monday with a Memorial Day-related post!
Posted by Bob Purse at 4:09 PM 1 comment:

Before getting to today's feature, I'd like to offer up the first of a series of ads that a reader and correspondent named Pete was nice enough to send my way. Thank you very much, Pete. The first one is an issue of TV/Record mirror in July 1962. I am very dubious of the "Songwriters' Association"'s claims to have placed their songs on either side of the records listed, the first two of which contained genuine smash hits. Just the fact that they asked for "Poems" instead of "Lyrics", to say nothing of the fact that this is based on the idea of an unsolicited lyric being made into a hit record, indicates what these folks were up to. 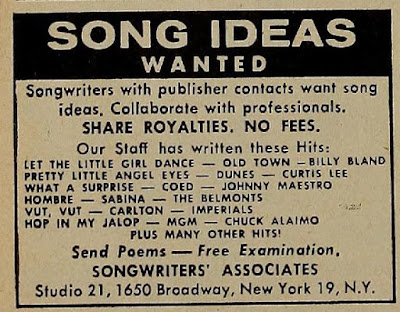 Again, many thanks, Pete! 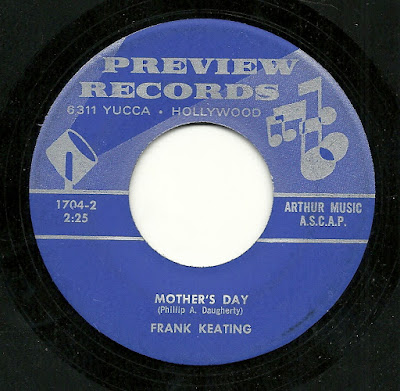 Today, at least in the U.S., is Mother's Day. And who better to sing about his mother than former Governor of Oklahoma Frank Keating? Well, while that is the name on the label, sadly, the vocal here is actually not by a notable American politician. No, even a cursory listen will demonstrate to those in the song-poem know that although the label says Frank Keating, the singer here is Rodd Keith. And a bittersweet lyric it is, indeed, as Phillip A. Daugherty's lyric poignantly recalls his late mother, and looks forward to the day (which he seems to think is coming soon) when the angels will guide him to meet her in heaven.

So the lesson is, that if she's still around, call your mother.

On the flip side is another Daugherty lyric, this time to a song titled "Rose Behind the Bar". This one lopes along well enough, with a pleasant melody and a nice vocal from Rodd. 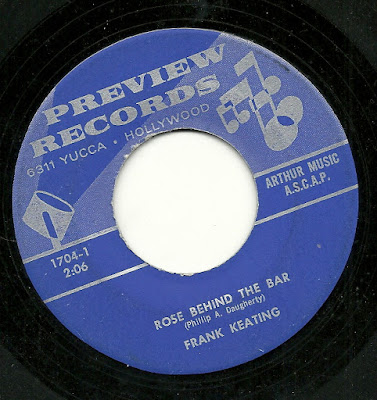 A Panoramic Port of Call 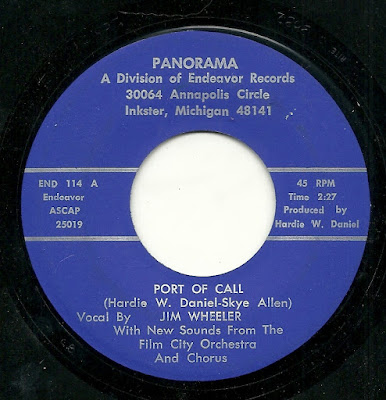 Following the intricacies of some of the smaller song poem label's relationships with the bigger song-poem factories﻿ can be a bit of a rabbit hole experience. Today we have the "Panorama", which was, as indicated directly below the label name "A Division of Endeavor Records". But "Endeavor" was also a fairly teeny label, releasing lease masters from Film City and Globe, and perhaps others.
So this is a satellite of a satellite. In this case, it's clear that the recording originally came from Film City, due to the presence of the unwieldy group name, "New Sounds From the Film City Orchestra and Chorus", and the lead singing (on the A-side) by Jim Wheeler.
The song itself is a description of an island paradise, with those new sounds, Orchestra and Chorus all being provided by someone playing the Chamberlin. Please enjoy "Port of Call":
Download: Jim Wheeler with New Sounds From the Film City Orchestra and Chorus - Port of Call
Play:
For the flip side, for whatever reason, the good folks at Film City/Endeavor/Panorama put an instrumental Chamberlain arrangement of the song on the flip side. This is not simply the backing track from the a-side, it's a complete arrangement of the melody, built on top of that backing.
Download: New Sounds From the Film City Orchestra and Chorus - Port of Call (Instrumental)
Play:
Incidentally, my pal Stu has (in the comments) found two more related items, both involving the man who apparently was a label honcho at Endeavor and Panorama (and who co-wrote this song), Hardie W. Daniel. First, here's a book with a very egotistical name apparently full of his marvelous poetry. And second, here's a blurb from Billboard magazine, about his supplying of records to jukeboxes. I wonder how that went over... 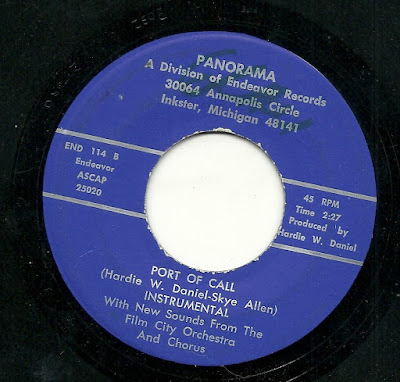