Before getting to todays record, here are two more very early Song-Poem ads, from "Film Fun" magazine, courtesy of reader and correspondent Pete! Note that these two ads seem very much to come from the same company, but that each is listed as being at a slightly different suite in the same building from the other.

And now, for a very special episode of "Six Songs in Ten Minutes": 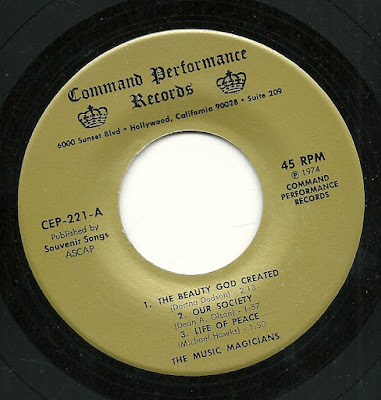 I've never before featured anything from the Command Performance label, first because I don't have very many records on this label, and second because they tend to be, to my ears, very bland, along the same lines as those recorded on the latter day (post 1974) Cinema and MSR releases. Not a surprise there - all three labels seem to have been using virtually the same core bands and singers. I just don't hear the magic in the music that seems to be guaranteed by the name of the house band at Command Performance. Based on what's been released on song-poem comps and other information I have, I suspect I'm in the minority in this opinion of this troupe and their various labels, and by all means, if you want to hear more from the MSR/Cinema/Command/Etc. gang, let me know - I certainly have piles of it.

But this one stood out mostly because of the text of one of the songs, which we'll get to in a minute. Like similar EP's on Cinema (and others on Command Performance), the folks at the label managed to squeeze six very short songs on the two sides of the 45, then suggested in the timings that the songs were mostly right around two minutes. One is, the rest aren't - and nearly every song is 12-15 seconds shorter than indicated on the label.

I'm pretty sure the singer here is Bobbi Blake, and suspect that I know I'll hear from at least one or two people either confirming this or contradicting me.

I'm pretty much going to just line them up and let you play and/or download them, but I do want you to pay special attention to song two, "Our Society". I will say no more. The six songs are:

Download: The Music Magicians: I Found a Friend
Play:

Download: The Music Magicians: Ahead of It All
Play:

Oh, I will add that I was hoping that "Little David" was about the behind-the-scenes machinations at George Carlin's record label (which was called Little David), but sadly, that does not appear to be the case. 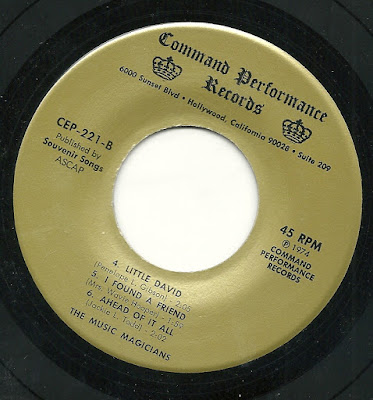 Well, before I get to this week's feature, I wanted to offer up two more song-poem ads that my correspondent Pete was nice enough to send along. These are truly ancient ads, coming from "Film Fun Magazine. The first one is from 1922, the second is from 1926. The latter makes note of a couple of gigantic then-recent hits allegedly written by amateurs - in neither case does this appear to be provably true, and, in the case of "Dardanella", is demonstrably false.

~~
Second, I want to link you to a new project that Sammy Reed has started. For a long time, I've had a link up to his strange music site, but that has now been shuttered. In its place (and in its place within my links) is a new project, featuring some wonderful oddities, including plenty of song-poems, called Music from the World of the Strange the Bizarre. That can be found in my links, to the right, and also with this link right here. 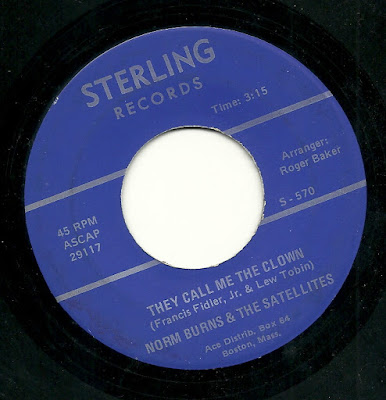 In this case, the song is "They Call Me the Clown". And actually, for this one, as much as I enjoy Norm, my attention is drawn to the slight extra effort that the folks at Sterling put into this one. The song isn't much - draggy and drippy, to be blunt - but someone had the bright idea of adding a trebly organ to the arrangement, and to have it play that famous circus tune (the name of which I don't know), although would it have been that hard to play the lick from that tune all the way through, rather than screw it up? And then, they actually dropped in some sound effects of people giggling and laughing. That's a nice touch!

Download: Norm Burns and the Satellites - They Call Me the Clown
Play:

For the b-side, we're in for some real drama, and Norm and the band do a decent impression of a supper club group, and whoever set the words to music and arrangement certainly seem to have had Bacharach and David in mind. The words tell a sad, sad story, and there are some nice turns of phrase, which may get lost when the record goes on and on and on for almost four minutes. But this is an attempt at something stately, and to my ears, it doesn't fail entirely, which, within the song-poem universe, has to be considered a sort of victory.

Download: Norm Burns and the Satellites - It Wouldn't Last Too Long
Play: 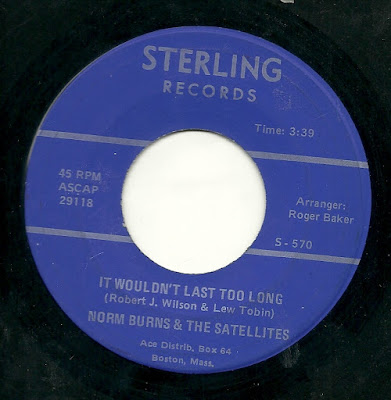 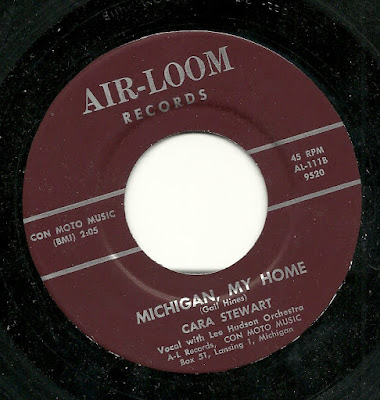 The "Air-Loom" label appears to fit the concept of a "tiny, regional" label to a T. Except that it probably didn't exist to promote actual attempts at hits, in the way that normal labels did. This was most likely the project of a few people, perhaps even just the one - Gail Hines - who wrote both sides of today's record.

The AS/PMA page for this label only shows two records on the label, although given that this is record #111, my guess is that at least 11 singles exist on the label. And for this one, at least, Ms. Hines turned to Lee Hudson, who assigned his best singer, Cara Stewart, to the job. As indicated on both sides of the record AND on the sleeve, which also includes Ms. Hines' signature (see below), "Air-Loom" and its related publishing company were based in Lansing, Michigan. So there will be no surprise when you learn that one side of the record features the dulcet tones of Ms. Stewart singing about "Michigan, My Home":

Pretty standard stuff for a Cara/Lee record, but I just eat that stuff up.

The flip side is equally lovely, and it's called "Beyond the Night": 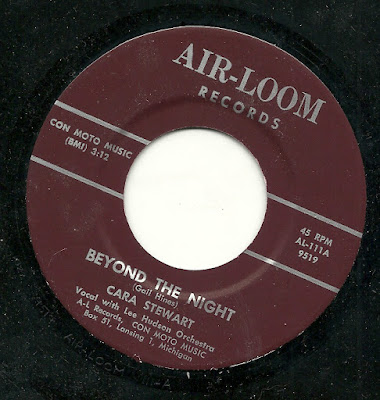 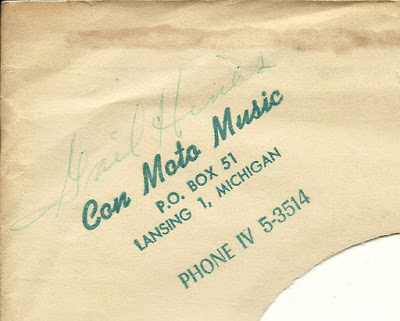