The Cool Cats Are On Star-X

Before I get to this week's offering, I need to share a link that Darryl Bullock sent me, of an astounding Halmark record featuring Bob Storm, which has been shared for the world on youtube. While this might not raise many eyebrows, were it to be released today, it certainly would have been the conversation piece in the early '70's, when it was actually released. I will say no more - I don't think I have any other words for this anyway.

Have a listen, here. Thanks, Darryl 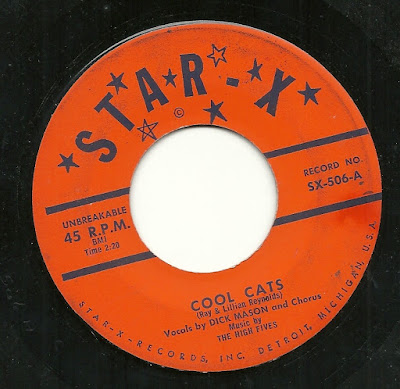 The AS/PMA website tells us that Star-X was a song-poem label, and of this there seems no doubt, given that it released discs by Sammy Marshall and the great Roger Smith. I have some question as to the actual story behind today's record, but the A-side is so fun I thought I'd share it anyway. The concern for me is that both sides were written by a team, and the same team. Then again, the performances are so ham-fisted they certainly sound like a group that was churning out demo-level renditions. Those with more knowledge than me can chime in with whether they think this is a song-poem, a vanity record or a legit release.

When I saw the credited artist, Dick Mason, I had guessed it would be Dick Kent in disguise. However, this record is from 1958, a bit early for him to have been the singer, I think, and besides that, it sounds nothing at all like him. I have no idea who this singer is.

The stronger of the tracks, by far, as I've indicated, is the A-side, "Cool Cats". These folks don't really understand rock and roll, aside from perhaps the guitarist, but they have a good time approximating it, and the result is infectious, rather ridiculous fun. Plus, the lyrics are certainly song-poem level, if that helps anyone in determining whether this is animal, vegetable or mineral. ,

The flip side, "Heavy Heart", has very little to recommend it, to my ears. The ponderous vocal and cookie-cutter, morose lyrics sound a lot like 100 other forgettable song-poem records. 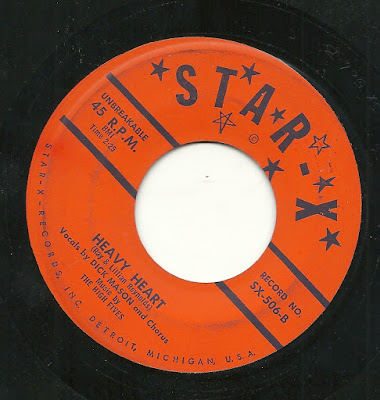 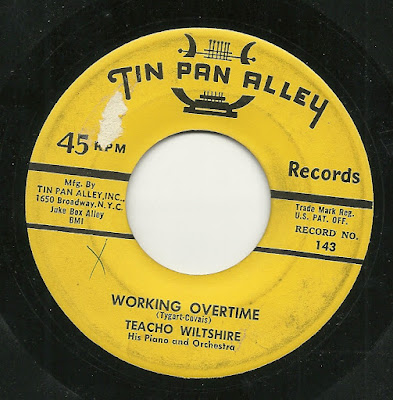 It's been too long since I've featured the great Teacho Wiltshire. An early stalwart at Tin Pan Alley, Teacho is one of the relatively few people named on Song-Poem release labels who went on to have a significant career in the legitimate music business. His name can be found in the production and arrangement credits of dozens, or more likely, hundreds of hits and near hits from the 1960's.

This, however, is from long before all that, late 1955, to be precise. It's a charming ditty titled "Working Overtime". This one was actually released twice by TPA, with two different flip sides. Sadly, I do not own the release with "Are You Willing" on the flip side, since it was indicated to be " The One and Only Rock 'n' Roll Waltz!", right on the label. But still, I doubt it would have lived up to the entertainment value of "Working Overtime".

Darryl Bullock, in a post featuring several TPA releases (although not this one), has a nice quote from an interview with a relative of label honcho Jack Covais, which includes some comments about this record. You can read that here. And glory be, Billboard even reviewed the thing! They got the copy with "Are You Willing" on the flip, but they still offered up thoughts on this one, opining dryly that "The singer's R & B efforts seem misplaced", and giving it the equivalent of a "D".

Well, I like it just fine. Judge for yourself! Without further ado, here is Teacho Wiltshire, His Piano and Orchestra, with "Working Overtime"

On the flip side, the same combo performs a truly overwrought rendition of something called "Waters of Telufa". A quick web search does not immediately indicate exactly where this concentrated dampness can be encountered, but Teacho's mannered performance doesn't lead me to want to go there, anyway. 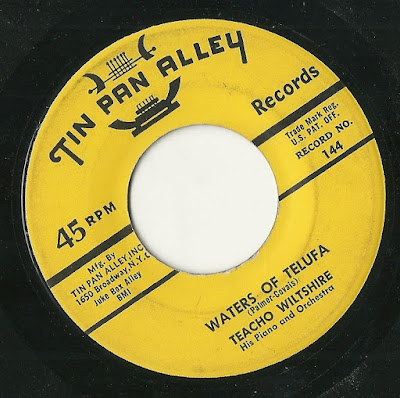 The Peculiar and Unique Cluelessness of the Song-Poet 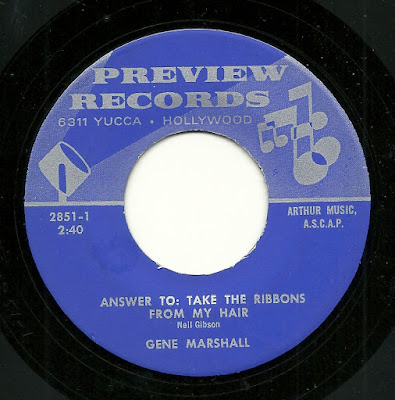 That the average song-poet is not in the least bit up to the task of constructing an effective lyric for a pop record is so clear as to not be worth arguing. The list of ways song-poets have missed the boat on songwriting is long and often comical. It includes, but is hardly limited to, choosing an unwieldy title, constructing lyrics which cannot possibly scan well when sung, tortured rhyme schemes, dumb concepts and mangled English.

Which brings us to today's feature, and a few words about Answer Records. As you no doubt know, way back when, any time there was a particularly unusual big hit record, or a novelty record, or a hit which was much bigger than the typical hit of the day, there would usually be multiple answer records. A few of them even became big hits, and at least one - Hot Rod Lincoln - became a bigger hit than the song which inspired it. One thing I've never seen on an answer record was the phrase "answer record" in the song title. Another thing I've not seen is an answer record which got the name of the original hit song wrong.

Then, up to the plate stepped song-poet Neil Gibson, who, in around 1976 or so, submitted his masterwork to the Preview company. What he wrote was a response to the then-fairly-recent hit "Help Me Make It Through the Night", what he titled it was "Answer To: 'Take the Ribbons From My Hair'". The thing is, there isn't a song titled "Take the Ribbons From My Hair", at least not that I can find. My thinking is that if you are inspired enough by a song on the radio, that you want to produce and promote an answer song, you ought to know the name of the song in question. And then you might want to create your own title.

After all, Jody Miller's "Queen of the House" was not titled "Answer to: 'Trailers for Sale or Rent".

Download: Gene Marshall: Answer To - "Take the Ribbons From My Hair"
Play:

The flip side of this record is a song called "Handful of Teardrops". Question - who the hell holds teardrops? This is so clunky a phrase that in all of the internet, a Google search shows it to have ever been used only eight times.

The song lives down to its title, and while there are a couple of really nice, complex piano fills near the end, that's the only saving grace. The most notable thing about it is the absolutely horrendous quality of the recording, the production and the pressing. This record sounds awful. 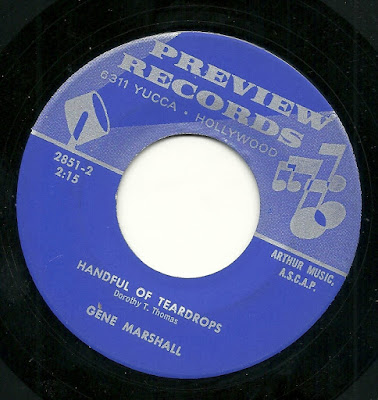