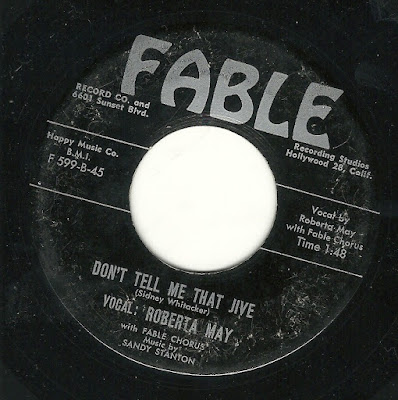 Of all of the labels I learned about, via my expanding knowledge of song-poems, my favorite long ago became Sandy Stanton's Fable Records. I'm not calling it my favorite song-poem label,.because plenty of its releases, perhaps most of them, were not song-poems. Stanton did go on to start Film City Records and discovered Rodd Keith after winding Fable down, but during the Fable years, it seems to have been a catch-all, with song-poem releases, novelty numbers, vanity records and perhaps some attempts at producing honest-to-goodness hits.

Because of its multi-hybrid nature, quite a while ago I decided to stop featuring Fable on this site, and instead, put together posts at WFMU featuring multiple Fable tracks. You can find those here and here. Unfortunately, I even stepped away from that project, for a few different reasons.

Now, with the WFMU blog closed, and no other outlet for these wonderful records, I'm going to throw them into the mix here and there, with the caveat that I know some of them are not song poems, and that I'm not sure about most, if not all of the rest. I hope you enjoy them, regardless of each record's individual provenance.

From the category of "maybe a song-poem record?"... comes a 45 sung by Roberta May, featuring two similarly titled songs by someone named Sidney Whitacker. First up is a bopping, swinging number called "Don't Tell Me That Jive". As do many Fable records of this period (this is from 1957), this features some fairly wonderful rockabilly guitar playing. I've been told a couple of times that the guitarist on these sessions was the highly respected (by a few, and woefully obscure to everyone else) Roy Lanham, who was later a member of the Sons of the Pioneers.

Download: Roberta May - Don't Tell Me That Jive
Play:

The flip side, with two of the same words as the first song, is "Tell Me", a fairly standard, and fairly bland rock-a-ballad, indistinguishable from a hundred other records from the era, except for some truly awful backup singing near the end... 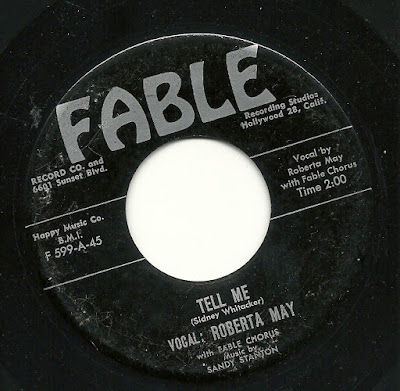 Email ThisBlogThis!Share to TwitterShare to FacebookShare to Pinterest
Labels: Fable, Roberta May, Song Poem of the Week

Say No to Dick 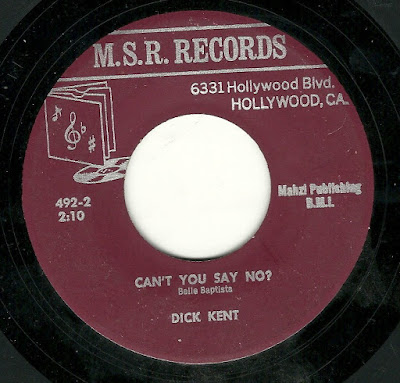 I'm not much of a fan of the MSR label, as I've mentioned perhaps too many times. But an exception is their early releases, where the bands were often cooking, and the vocalists - lead and backing - often sound very involved in the lyrics and performances in general.

Here's an example. The lyrics to "Can't You Say No" are fairly tortured - something about the lyricists complain that the object of the singer's attention has had the audacity to say "no" to the singer, while the singer thinks that his beloved should be saying "no" to everyone else but him.

In a rarity, I really dig Dick Kent's vocal here. He really sells the lyric and the song. But even better is the backing band , who are playing a track which deserves a better song. and the backing vocalists, who are offering up some wonderful three part harmonies, particularly during the line "say yes to me" which finishes each verse. Good stuff!

I cannot work up the same enthusiasm for the flip side, Dick Kent's performance of "Come Join Us", a story of promoting Christianity to everyone within earshot. 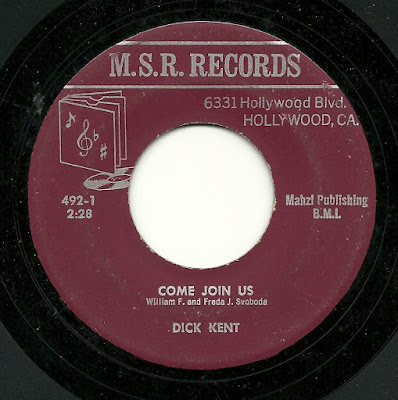 "Lance" the Untrustworthy, Parts One and Two 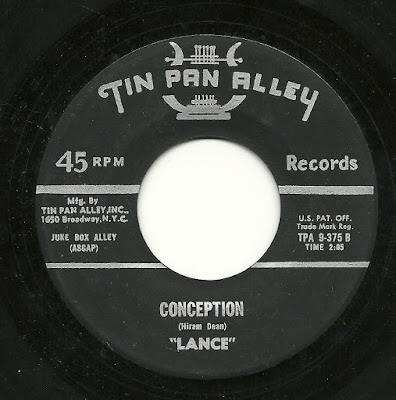 In both of the songs contained on this 45, "Lance" is heard portraying a person who seems to not have the best of intentions towards whoever it is he is addressing. On the second side, he's quite upfront about what is to be done about his untrustworthiness, but on the first song, titled "Conception", I'm honestly befuddled as to what he's on about.

The protagonist of "Conception" is upfront about his unsavory ways, but his motivation is quite mysterious, as is the meaning of the title. Perhaps I'm missing something obvious, or even something hinted at, and by all means, offer up your thoughts regarding this song.

On the other hand, the lyrics that "Lance" sings over the thud-rock of "Hands Behind My Back" leads one to believe that the protagonist has been, shall we say, grabby with his gal-pal in the past. So he's offering to go parking somewhere remote with, yes, his hands tied behind his back.

Whatever the meaning, "Lance" certainly gives the lyric his all, especially at the 1:51 point. 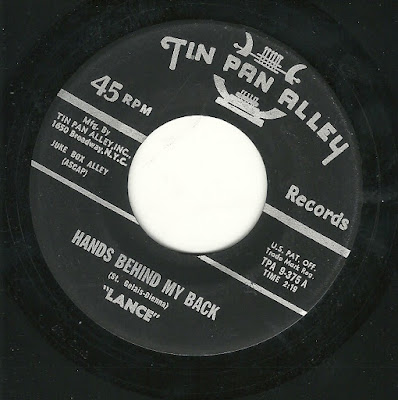