The Filmy Tones of Film-Tone

Before I share this week's EP, I wanted to make sure that anyone reading this blog knows that I posted an entire song-poem album to the WFMU blog over the weekend. That post can be found here. 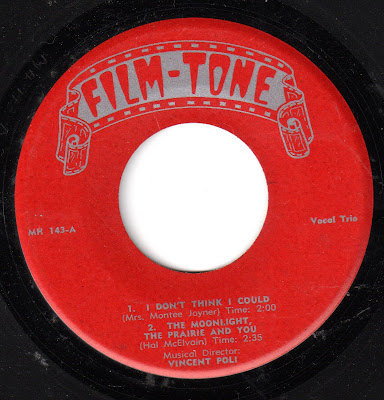 The Film-Tone label is one of the murkier ones in the song-poem world. I posted a single Film-Tone song early on in this project, but today we have a full EP. ASPMA has documented a link between this late '50's label and the 1960's Star-Crest label. There's no suprise there - both feature arrangements which were long out of date, sung in a sort of sterile style.

But Star-Crest tended to feature a soloist singing what were clearly demos, often barely rehearsed, backed by a pianist or at best a minimal combo (I posted a full Star-Crest album here, a few years ago). At Film-Tone, on the other hand, they went in the other direction, featuring a small combo (piano, guitar and sax, here), and almost always (on the records I've owned and/or heard) a mixed trio of voices - usually fairly intricate in arrangement and (almost) well rehearsed, even - as you'll see - when the choice to use this vocal combo clashed with the lyrics.

Every Film-Tone record I'm aware of is a 45 EP, and although some actually have a name of the orchestra on them (plus "vocal trio"), the three I own do not, reading just "vocal trio". There are a couple of winners here, if you're willing to wade through two others which are quite tepid. The final track, in particular, should prove very entertaining.

The first one, "I Don't Think I Could", does feature some heartfelt, painful lyrics, but the performance is fairly soulless, and it's perhaps my least favorite of the four:

With "The Moonlight, The Prairie, And You", things take a definite step up, in my opinion. Maybe I'm just a sucker for this sort of thing, but this actually sounds like something one might hear on a nostalgic album of "songs from long ago". That it was actually written in the late '50's, commissioned, song-poem style, adds a level of weirdness that I enjoy.

Herve LaPlume's "Send Me Away with a Smile" is notable mostly for the melody, which seems to have been constructed almost entirely from random notes, and I'm amazed that the trio gets through it with as few errors as they do. I don't think I could have sung it:

The award winner here, though, has to be "Steppin' On the Gas". First of all, am I wrong, or do these lyrics make no sense, particularly the line after he's been stopped by an officer: "I had to do some speeding or pay a fine, you see"? Also, what is the line after "the car sped down the highway"?

Those specifics aside, these lyrics are an endless source of pleasure to me, as is the peculiar decision (alluded to above) to use the mixed trio - with the two women on lead for most of the performance - to sing a song which is written from the view of a man. 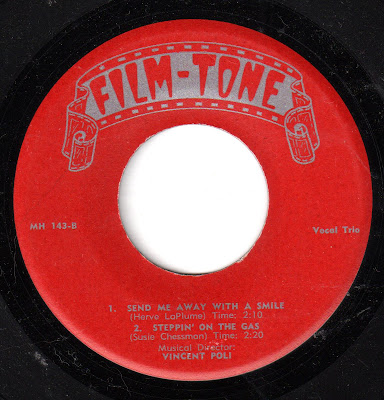 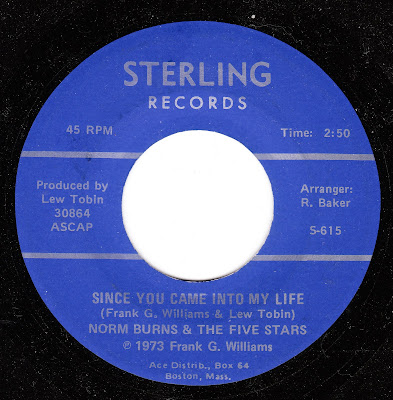 This week's posting is quite late, due to a brief vacation and some computer problems. I'll get back on schedule with another post within three days, and will be posting a full Song-Poem album to WFMU soon.

Today, a record which caught me off guard, "Since You Came Into My Life" by Norm Burns and the Five Stars. I would describe this as Norm Burns (completely failed) attempt to provide the customer with some early '70's soul music. I definitely hear elements of that Philly Soul (one of my least favorite genres, to be honest) here, as well as other soulful sounds of the era. The results, particularly Norm's painfully uncomfortable vocal - possibly the worst I've ever heard from him - are fairly bizarre, and not what I expected to hear on a Sterling record. See what you think:


The flip side, "What Kind of Fool Do You Think I Am?", is a much more typical example of the run-of-the-mill bland side of the Norm Burns experience, nowhere near the highs of his best ("Darling, Don't Put Your Hands On Me" and "The Human Breakdown of Absurdity" come to mind) or his most amazingly bad (see above). Oddly, this side is attributed to Norm, not with the Five Stars of the flip, but with Sterling's other identified band, "The Satellites". Since I suspect these were both the same band, I find the differing billing sort of interesting: 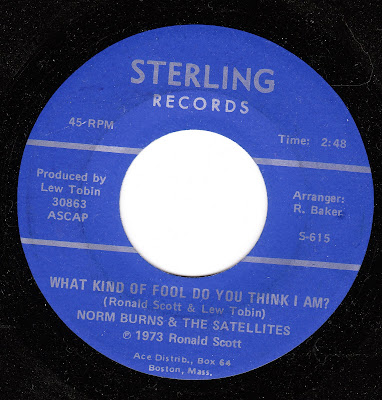 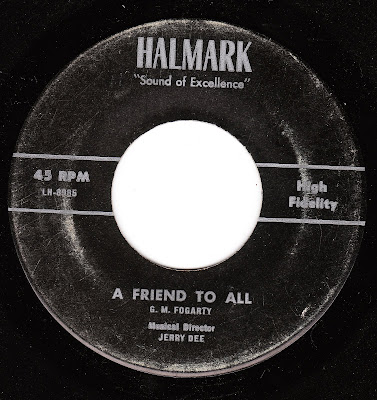 The song-poem format seems just about perfectly designed for the tribute song, particularly the bad tribute song. And indeed, there are countless song-poems out there which are written by wives about husbands, or husbands about wives, about parents or children. And of course, there were many entire albums released in the wake of Elvis' sudden, unexpected death. There were even entire song-poem albums about Jimmy Carter and Ronald Reagan, as well as at least one 45 apiece (that I know of) dedicated to Clark Gable and E.T. (In fact, doesn't "Heartlight" seem like it could have been a song-poem?)

None of that knowledge prepared me for what I encountered when I first put the needle down to enjoy the Halmark release, "A Friend To All", in which the writer, "in her declining years", offers up three minutes of tribute to, yes, Arthur Godfrey.

This song was presumably written not long after Godfrey ended his regular broadcasting career in 1972, and no doubt some time before it became more generally known what a unpleasant man he tended to be.

The opening moments of the flip side, "A Walk on a Lonely Road", gave me great hopes. For one thing, I don't think I'm familiar with this backing track, a rarity at this point, with Halmark records, and I was greatly taken with the drum intro, and to a lesser degree with the music bed for the first minute or so. I think something interesting could have been done with this.

In the end though, (Mr.? Mrs.? Miss?) Egle Bigatti's trite lyrics, the increasingly bombastic arrangment, and the typical over-the-top vocal performance sink this one, as does the nearly four minute length. 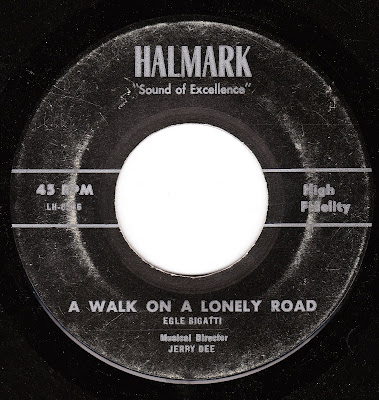 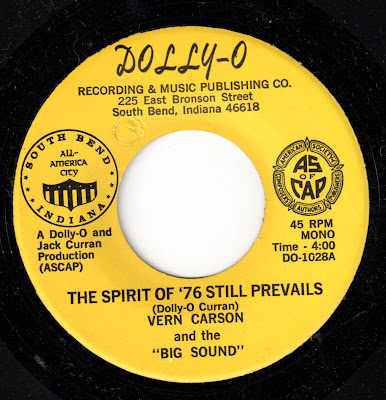 Today, a day late, I'm offering up two Red-White-and-Blue tunes for America's birthday. And for those of you who enjoy car-crash level horrible song-poems, you're also in for a treat. Both of these tunes feature lyrics provided by the extraordinary Dolly O. Curran, of South Bend, Indiana.

Not content to submit lyrics to a variety of song-poem labels, Dolly set up her own label, and released the product of her submissions on 45's and EP's, on her own "Dolly-O" label. Her songs tend to have religious, patriotic and/or Indiana-Centric themes. She reached her highest point with a Halmark production of her song "Lady Off Pedestal At Notre Dame", which was at one point my favorite song-poem at all, and which is readily available for download on line if you go looking.

From the other end of her releases, these are two heartfelt, but truly awful patriotic numbers, both of which clearly feature the sounds of the Film City label. I'll assume the "Vern Carson" heard on the song "The Spirit of '76 Still Prevails" is the singer usually billed as Fred Carson (although I don't remember Fred's voice, at this moment, well enough to swear by this). Enjoy it, and keep in mind that you ain't heard nothing yet:

"Frank Lane", heard on the flip side, with "America Spreads Her Wings", is quite clearly Frank Perry, a Film City stalwart. Here we have a nearly tuneless ode to, of all things, the admission of Alaska and Hawaii to the Union. I defy anyone to sing along with this song. And then there's the clunky "everyone is welcome" spoken word section in the middle. ENJOY!: 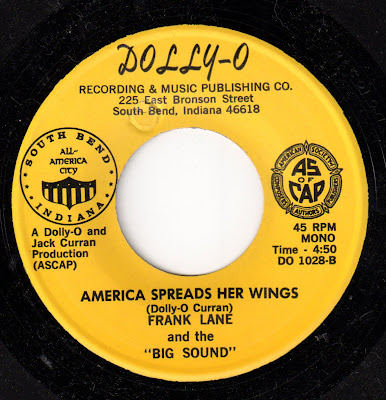