Caveman, Christ and the Drifter 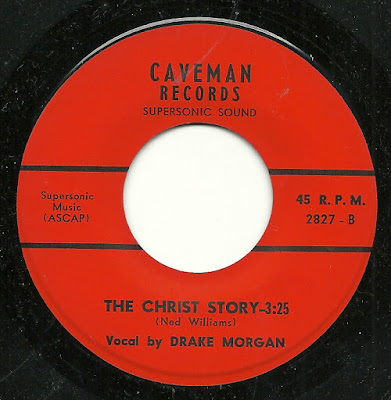 Today, we have a 1964 single on the tiny Caveman label, featuring two singers I've never featured before. in fact, I've never owned records by them before, and they barely turn up among the documented song-poem releases. First up, and just in time for Easter, is Drake Morgan with "The Christ Story". The most curious thing about this song, to me, is that lyricist Ned Williams (who wrote the words for both sides of this record) seemingly had no issue with lifting the words directly out of the hit song "The Three Bells", and nonsensically suggesting that they were spoken by The Three Wise Men (that'd be a good trick, since those lyrics reference The Lord's Prayer, which wasn't spoken by Jesus until adulthood, to say nothing of the fact that they also refer to the singers of those words as being a "congregation").

The rest of the song is a sort of "The Gospels' Greatest Hits"; quick summaries of a few high points, captured in fairly clunky verse, at least when set to this particular music. One wonders (well I wonder) if the writer of this lyric was of the fundamentalist persuasion, and if so, if he objected to the song's release on a label named after Cavemen, something that such a person would presumably believe never existed.

More fun by far is the flip side, "The Drifter", subtitled "(Western Opera)" and warbled for us by Monty Mathis (perhaps Johnny's less successful brother?). I actually find this one fairly catchy, perhaps because it is, at certain moments, very reminiscent of a very memorable song, "The Last Round-Up", which was originally a hit in 1933. Anyway, this bounces along with a warm, well played western-type backing track, and Monty does what's needed. The lyrics are engaging and the melody sells itself, too. I dig it. 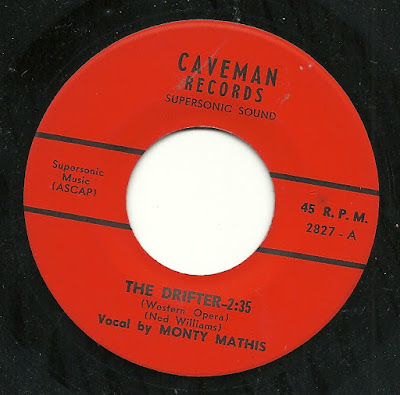 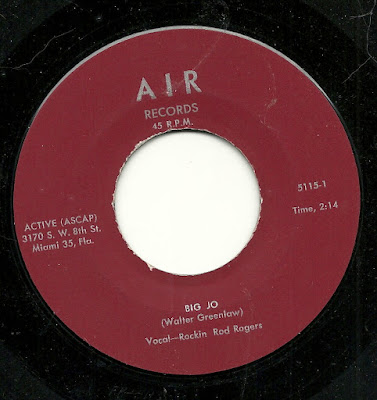 Today, a﻿ very special number from our friends at Air Records. Air seems to have been a community war-horse for the song-poem factories. I don't really understand how this worked, but material from multiple companies - including at least four or five of the large ones - ended up being released on Air, as often as not with two different companies' product showing up on the two sides of the single.
On one side of this record, we have Rodd Keith, not just in his Film City guise as Rod Rogers, but in this case as "Rockin' Rod Rogers", which sounds much more exciting. And a lovely example of his work it is, too. The sad saga about Rod's lost love, "Big Jo", lopes along over a thick Chamberlin arrangement, complete with a sweet, if simple, solo.
Download: Rockin' Rod Rogers - Big Jo
Play:
On the flip side is a song by Nancy Sherman. She pops up here and there on about a half-dozen song-poem singles, all on the smaller labels, aside from Air. I featured her once before, on a much better track than this one. This track "I Believe You", sounds like it might have come from the Globe song-poem factory, but I'm really not sure. It's fairly non-descript, except for the bridges, where it briefly crosses over into torch song territory.
Download: Nancy Sherman -  I Believe You
Play:
﻿ 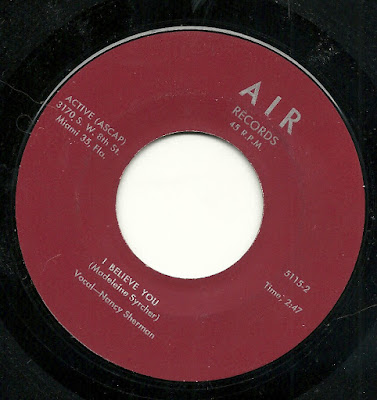 I first want to thank Sammy Reed for calling my attention to the fact that sometimes, if you click on comments, or post a comment or next page, a spam ad is popping up in a new screen. I was unaware of this, and it seems to be a new problem. I tried three browsers, and it only happened to me when using Internet Explorer.

I apologize for this, but don't know what has changed or how to fix it. If anyone has a suggestion, I'll be happy to hear it and try it. 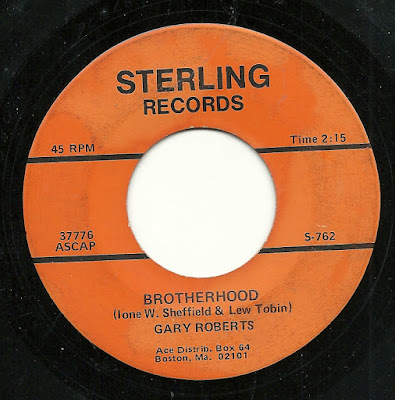 Can it really be four years (almost to the week!) since I've featured Gary Roberts. I guess it's because I just don't have that many of his records, because those I do have are almost uniformly ridiculous (in myriad ways) to be featured here.

Today we have a poem praising the idea of brotherhood, and suggesting the practice of believe in brotherhood far and wide. The song-poet makes a few key errors in writing a song about brotherhood, starting with the use of snark - as in the line quoted at the top of this post "I"m as good as you think you are" - which is not likely to encourage an outpouring of understanding. That pales in comparison, however, with the big payoff to the chorus, where it becomes clear that we should also treat each others as brothers and as equal, as long as everyone involved is.... Christian. That strikes me as a wee bit hypocritical.

For the flip side, the awkwardly titled "It's Because I Love Just You", the folks at Sterling made a perfect choice. Since the lyrics are so derivative and unimaginative, why not pair them with an unoriginal setting. Hence, they took the chords, tempo and nearly the melody from "Gentle On My Mind" for the first half of each verse, and then changed the rest, perhaps hoping not to get sued.

Download: Gary Roberts - It's Because I Love Just You
Play: 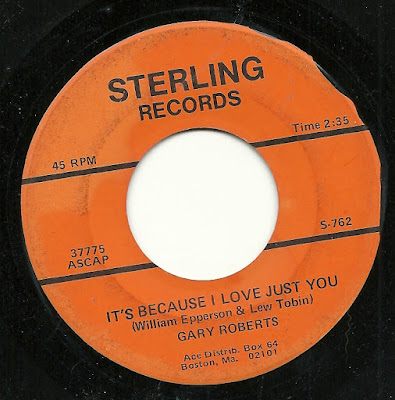 A Jimmy Drake Rarity On a Tiny Label 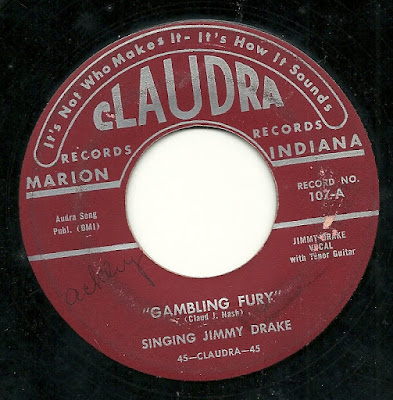 Okay, so I'm not going to claim any greatness for today's record, but it is historically important for those of us in song-poem fandom (and I'm definitely in that number) who are fascinated by the story of Singing Jimmy Drake, AKA Nervous Norvus.

And here we have a Jimmy Drake record which is mentioned on the AS/PMA website, but which has not been previously heard by the song-poem faithful. As explained at that site, this record was referenced in an ad, hence its inclusion on (and the very existence of) the Claudra Records page. That it is a song-poem record (since Drake made non-song-poem records as well) was only confirmed by the presence of Roger Smith on the flip side.

So here's the record, "Gambling Fury", in all it's low-fi glory. This record is beat to hell. It sounds like maybe it skips right into the start of the record, but I've tried playing it on a couple of turntables, and manipulating the needle, etc. It seems like it really does start the way that you'll hear it here. There is a skip a few moments later, which I have tried to correct, without success. If I succeed later, I will update the file.

As mentioned, the flip side features Roger Smith. And, for the very first time, I am underwhelmed by a Roger Smith performance. The song, "Golden Yellow Moon" (which seems a redundant phrase to me, by the way) doesn't help. It's pretty uninspired ("Every year has June, that's just for a while" - really?), and the midtempo, vaguely western setting is equally bland - the sax solo seems totally out of place, too. I much prefer my Roger Smith singing in an unhinged fashion, over careening music. 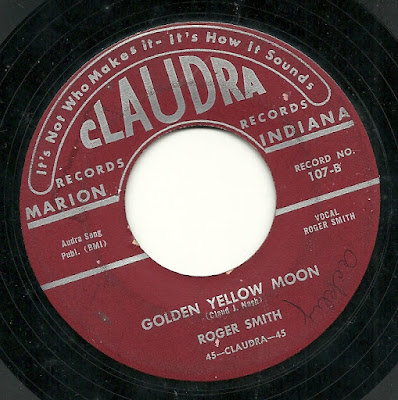