Okay, so here's a post I wrote and thought I'd posted, back on Tuesday. But I went to start the new post today, and found this one still sitting in draft. So here's last week's post, and a new one will come through early next week. 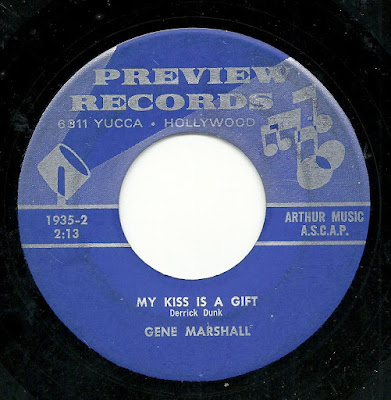 Today's offering is "My Kiss is a Gift" by Gene Marshall. I find this record - or, more specifically, this lyric - downright peculiar. There isn't much to it, as you'll find after a quick listen. The track is fleshed out by repeating the two line chorus over and over again, and the verse lyrics are variations of the same ten words or so, rearranged a bit, each time. This alone is not all that unusual among song-poems, although it's interesting that Gene never actually sings the title of the song - the word "gift" isn't even in the lyric.

But it's that chorus that befuddles me: "To send you just a whiff, a kiss; to send you just a dearly kiss". What the HELL does that mean. Is there anyone out there that has, in describing a kiss, used the word "whiff". I actually find that distinctly unpleasant. And what is a "dearly kiss". If you have any great thoughts therein, by all means let me know.

Download: Gene Marshall - My Kiss is a Gift
Play:

Actually, I was intrigued by this record, before hearing it, by the title of the flip side, "Possessed". And it's not bad - there's some good lyrics here, and Gene endows it with some really good emotion. The band arrangement has, to my ears, a touch of the Rodd Keith sound. If I hadn't heard 50 other midtempo Gene Marshall Preview sides that sounded pretty much just like this, I might find this more compelling. As it is, it's certainly decent enough, but doesn't really stand out. 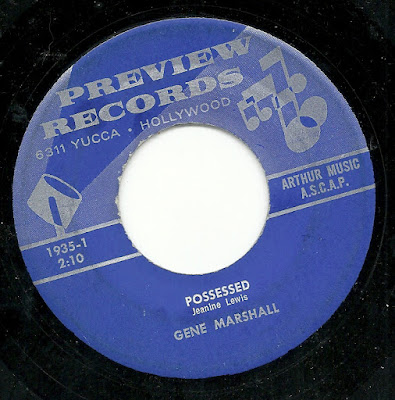 Certainly one of the dreams of many, and probably most recording acts is to be awarded a gold record, for sales of.... whatever a gold record symbolizes or symbolized at the time of its awarding (the standard is different for singles and albums, and has changed for each multiple times).

As the owner of a song-poem label (well, a series of them), Sandy Stanton had no hope of achieving this accolade, and probably no interest in it, either. But still, he did occasionally press his records in a few different shades of the rainbow, and for one of his very few vocal performances on his own Film City label) (only two are documented at the song-poem database), he gave himself a gold-colored 45: 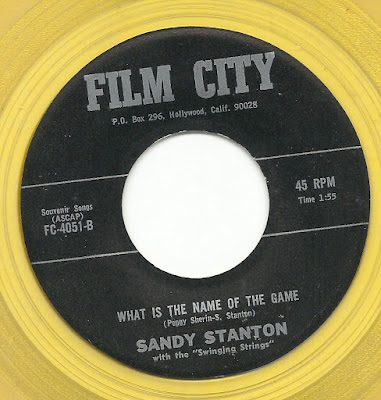 This record is not documented at ASPMA. It comes from very late in the label's existence (the documented label numbers only reach about one hundred digits higher), and it is numbered after the last known Rod Rogers record for the label. That said, it clearly sounds to me like Rodd Keith on the Chamberlin, doing some wonderful work.

And the two songs, both written by the same song-poet, sound extremely similar - they are clearly based on the same Chamberlin settings, playing at the same tempo and nearly the same key. The main difference is that one song bops along breezily in under two minutes, and is bouncily enjoyable throughout, while the other seems cobbled together in places, and goes on for far too long.

The former - my preference of the two, is "What Is the Name of the Game?", and here it is!:

Download: Sandy Stanton with the "Swinging Strings" - What Is the Name of the Game?
Play:

As mentioned, the flip side, "You're Haunting My Dreams" could be mistaken for the same track on its flip side, at first. But this track keeps going and going, far after its worn out its welcome. The words aren't as effective as the flip, either ("I stay here and you stay there - stay there"). Plus, am I the only one who hears a number of fairly poor edits in the Chamberlin track and maybe in the lead vocal track?

Download: Sandy Stanton with the "Swinging Strings" - You're Haunting My Dreams?
Play: 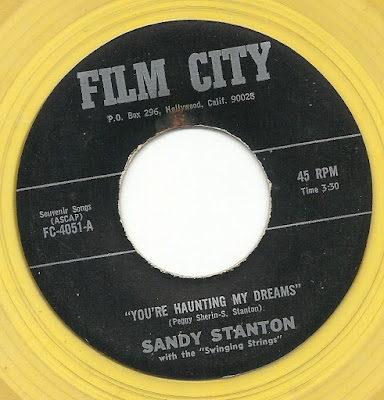 Incidentally, an anonymous poster has recently offered up a few personal memories of Sandy Stanton, with more promised. This post was, in part, inspired by that person, and I thank him or her for the comments. You can find those on this post (which unfortunately, has broken sound file links).