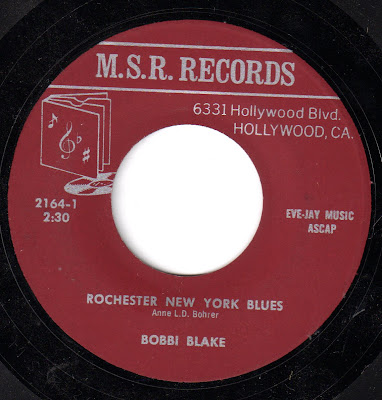 This is the week I get to offer up a more substantial thanks to a reader/poster named Sammy, who let me know of all the broken links which I've slowly been fixing (and there are eight more at the end of this post). He's a big fan of Bobbi Blake, and has pointed out a glaring hole in the collection of songs I've posted over the course of 25 months - no Bobbi Blake! I'll rectify that today, and in the near future.

The absence of the lovely-voiced Ms. Blake is less because of any dislike on my part for her singing (although, to be fair, my tastes in female vocals on song-poems run closer to the 1950's style heard on records by such singers as Betty Jayne and Cara Stewart). The main reason is that she did most of her work for MSR, a label whose general sound (with major exceptions) doesn't do all that much for me.

But I never intended this site to just be about my taste - if I'm not posting something from a segment of the song poem world that you like or love, by all means let me know, through a comment to a post.

Today, though, two MSR 45's which are major exceptions to my apathy for that label, at least on their respective A-sides. Best of the four Bobbi's to be heard today is probably the one which goes by the unlikely title of "Rochester New York Blues". I dunno, those words don't seem to have much in common with each other, or with the musical style heard on this platter. However, what is there is suitably odd and interesting. There's a nice soulful band performance, with some great organ fills during the vocal, but when the solo section hits, the weirdness begins, as it sounds to me like a carnival has come to town. On top of it all is a first rate vocal.

The flip side is the downright turgid "Beggar of Love", which features that unfortunate string keyboard which is the biggest reason for my dislike of many MSR singles. 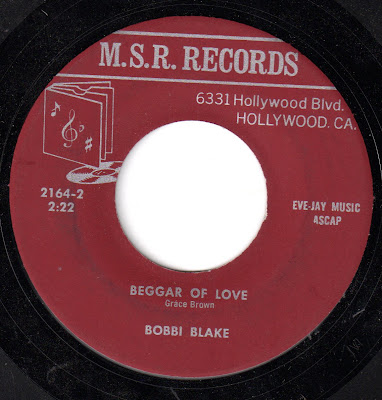 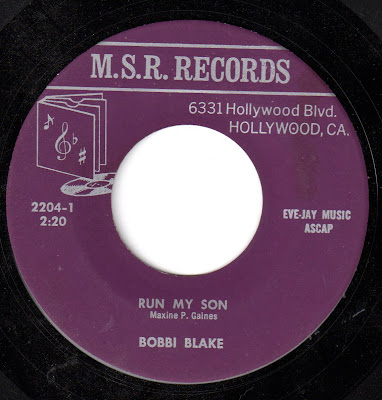 Picking up the pace, though, is the a-side of the second record I'm featuring today, a driving rocker with a forceful vocal (and in which those synth strings are thankfully buried), "Run My Son", a plea to the writers child to follow the straight and narrow. The sudden fade makes me wonder if there was an error further towards what was supposed to be a longer fade.

Finishing out the set is "A Woman", another bland ballad, with one of those song-killing spoken sections. But getting two good songs out of two song-poem 45's is certainly far above the average. 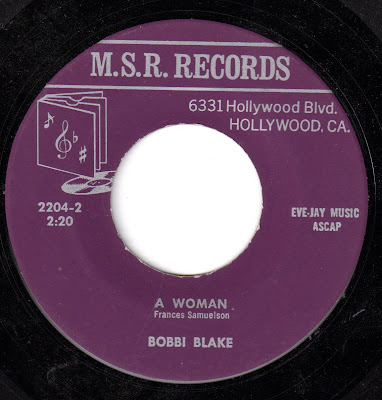 Thanks again to Sammy - hope this is a good start at a pay back. Here are eight more posts that have had files repaired:

By the way, the comments to that last post - Song Poem or Not? - indicate strongly that the answer is "or not". But still, it's a fairly amazing record.
Posted by Bob Purse at 7:13 PM 3 comments:

It's Nice to Know You 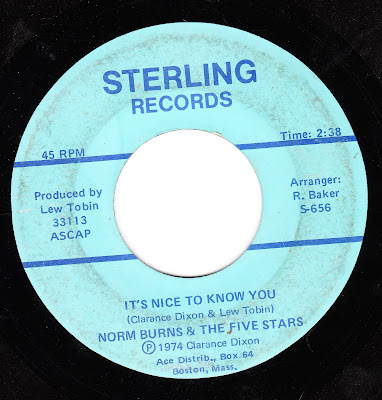 I'm pretty well tied up with other things this week, so I'll skip most of the commentary and just say that I hadn't offered up any Norm Burns in over half a year, and felt that the time was right. Here's a distractingly scratchy Sterling platter titled "It's Nice to Know You". The label number and year on this record indicates that it would be one of the last records Norm would record (or, at least, release). He died later in 1974, and his last release number that I'm aware of is barely 30 numbers higher than this one:

And here's the flip side, "Deep Love".

Repairs to older, broken files will resume next week. 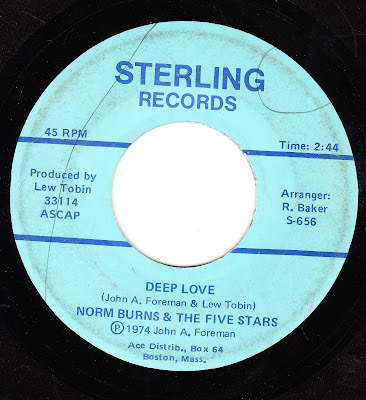 Some of you may have already noticed, but with the new year, I've upgraded my divshare policy, at the suggestion of a couple of kindly readers (thank you!). Not only should this mean no longer waiting through ads in order to download songs (and please tell me if you still have to wait for the ads), but I also believe this will solve the problem of links eventually breaking (but also please let me know if you continue to find broken links).

Just below this announcement post, you'll find this week's post for Song-Poem of the Week!:
Posted by Bob Purse at 9:39 AM No comments: 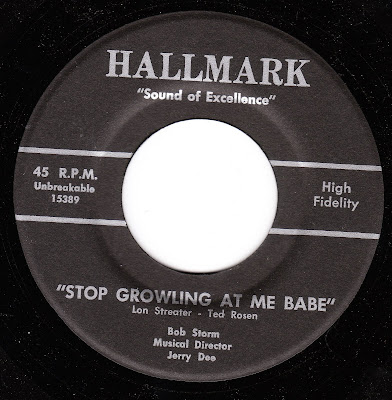 Dear readers/listeners, today we are all in luck. It's not every day we get to hear a previously unheard epic from the Halmark factory, and their prime export, Bob Storm. And what's more, today's offering carries the promising title "Stop Growling At Me, Babe!" And it doesn't disappoint, with typically Halmark-worthy (and often stunningly unmusical) lyrics, such as "I have the right of way", "your indignant tone", "double-crossing glances are out of date", and an all time winner of a lyric: "I am in the unsophisticated teenage category". Enjoy!

Also please note that this is one of the logos (the label used a few) in which Halmark (the most common spelling on their records) used the correct spelling of the word, with two "l's".

The flip side, "My Love is Yours", is more typical of the unctuous, barely listenable material that graces the majority of Halmark releases, but I know there are some out there who will revel in it, for just that reason. I do particularly enjoy the following rhyme, such as it is: "Everything I have is yours / For my love is yours". I'm sure that couplet took a lot of thought:

Here are some more repaired postings: 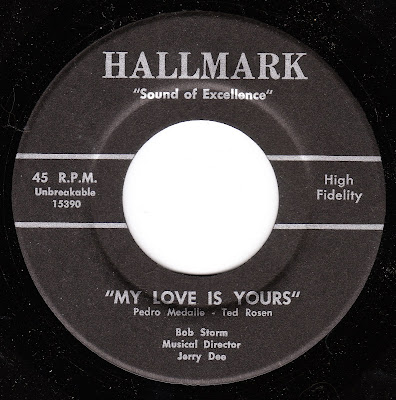 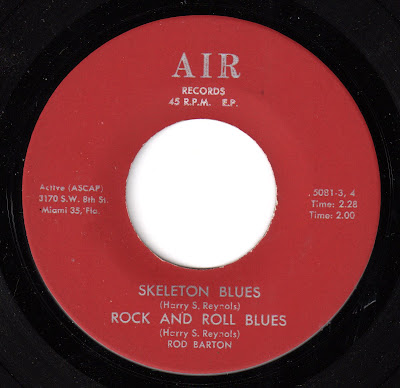 Happy New Year! I thought this celebratory occasion called for something special, an EP which only recently made its way into my collection, and which I've really been enjoying. It's a record on the Air Label, and features Rod Barton and Sammy Marhsall, with two songs from each of them. The real stars here are the two songs on the B-side, written by Harry S. Reynolds, and sung by Rod Barton, who was previously heard on this site on an acetate, doing that insane song about "Heat".

First up, and best of the bunch, is "Skeleton Blues", which I'm betting will have every reader up and about, "rattling those bones":

Sounding fairly similar, and not far below in quality, is "Rock and Roll Blues". This is the sort of session I'd love to have attended:

Over to Sammy Marshall's side of things. First up is a peppy number which seeks to keep us all humble and to offer up some insight which is always welcome at the start of January, "You Put Your Britches On Just Like I Do". I notice that Sammy never actually sings the words of the title line in the order listed on the label!:


The side ends with Sammy and friends doing what sounds to me like an attempt to capture the sound of The Fleetwoods on the very brief song "You're Not Mine Any More":

Finally, I've corrected another ten posts which had dead links. They are as follows:

The Stranger
The Songs They Play Are On Vellez!
Phil and Don Meet Jimmy and the Boys (A Mash-Up I made, which I was quite happy with...)
Never Like This!
A Canary Record
Sammy At the World's Fair
He's Got a Reputation!
Here's a Fun One!
High Brow Baby
Not Enough Les in the World (Les Paul Tribute) 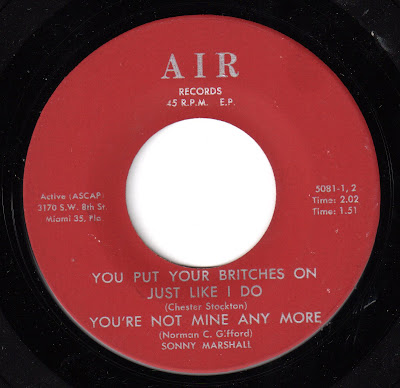