You May Say He's a Dreamer 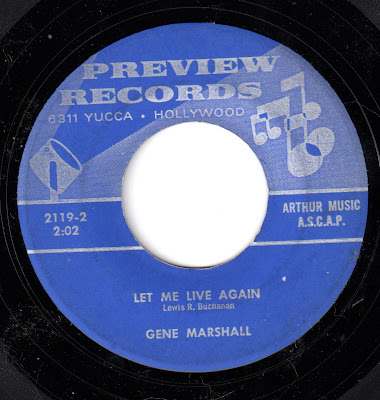 Today's offering is such a favorite of mine that I can't believe I've never posted it before. It's place in my collection goes back to my earliest days of collecting song-poems.

In "Let Me Live Again", Gene Marshall gives us a rousing portrayal of a man who is praying for relief in so many areas it makes my head spin. If God is capable of getting whiplash, this is the sort of prayer that might do it. It's not enough to solemnly pray for internal improvement - for relief from being a junkie and a drunk - the list quickly expands to (among other things) freedom for children, freedom from pollution, and a wish for something that goes beyond simple peace between the races. He even wants the grass to be greener! It all culminates with a fairly soulful and wonderful excited expression of the title. All in just two minutes!

I don't have nearly as much to say about the fairly pedestrian flip side, "Forgive Me Darling", but it's almost always nice to hear Gene's dulcet tones, so by all means, enjoy it for that: 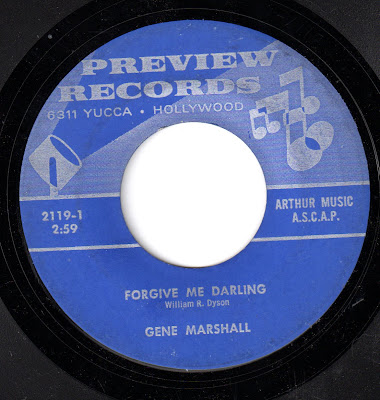 Today, I finish the updates and corrections to previously broken uploads, with total of six repaired files, across the following four posts:

Gene Marshall Meets the Big Beatle
Three Song Poems for the Price of One
More Merigail
Announcing! Song of the Week Project (the first post in this series)

Some time in the near future, I plan to upgrade the first two dozen or so posts from this blog, (prior to the focus on song-poems) when I was posting the songs themselves to an external site that required a password. It was a clunky process, which I did away with when I started using divshare, but those initial posts do not have sound files attached to them. Sometime soon, I'll rectify that, and post links.
Posted by Bob Purse at 11:12 AM 2 comments:

Before I get to this week's offering, I've forgotten for two weeks now to alert any of you that might be interested that I made a post to WFMU which has a bit of overlap with the song-poem world. It's my second visit to the amazing releases on the Fable Label, some of which may have been song-poems, all of which are wonderful in their own way. That post is here. 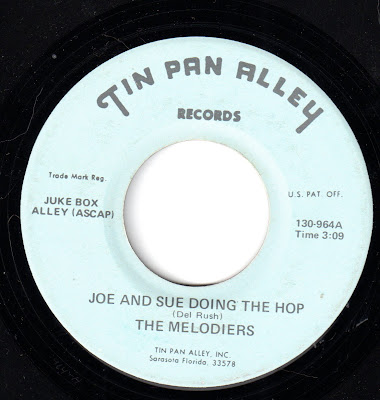 There is almost nothing I could offer up in comment about today's featured song, a Tin Pan Alley number called "Joe and Sue Doing the Hop", that won't be addressed better by just listening to the record itself. I'm sure you won't be disappointed - thank me later. Here are the Melodiers:

Please note that the above song was written by Del Rush, who wrote the equally amazing "We Like the Kentucky Hills", which I offered up in my final post for 2010.

The flip side, "Peace of Mind", is notable for using a modified blues progression that Tin Pan Alley performers used over and over again on their records, for another set of winning lyrics, and for another singular performance by the Melodiers. 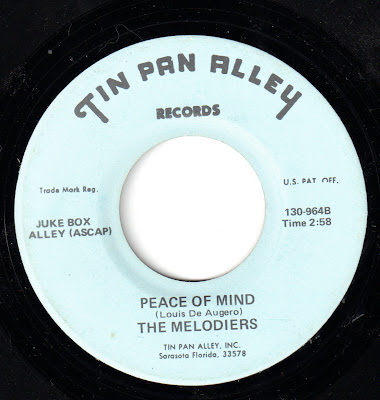 Email ThisBlogThis!Share to TwitterShare to FacebookShare to Pinterest
Labels: Song Poem of the Week, The Melodiers, Tin Pan Alley 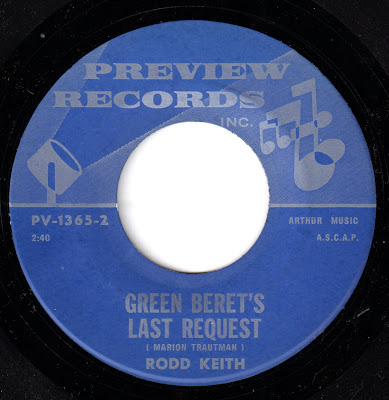 I'm sure, if you're anything like me (or like song poem lyricist Marion Trautman), you've been kept up many nights by the thought of Barry Sadler's "The Ballad of the Green Berets", wondering, focusing, fantasizing, obsessing over one question: "But what happened NEXT?".

Well, your prayers have been answered, because Rodd Keith, and the aforementioned Ms. Trautman, have teamed up to answer all of those questions, with the song "Green Beret's Last Request".

I'll also mention that this record sounds to me less like a typical Preview label release, and much more like a Sterling Label record, from the band sound to the use of echo. Since dozens of Preview records from this era (although not this one) show the involvement of Sterling boss Lew Tobin, this similar sound may not be a coincidence!

The flip side, "Suddenly", does not, in my opinion, have a whole lot to recommend it, but the many Rodd-Heads out there may beg to differ: 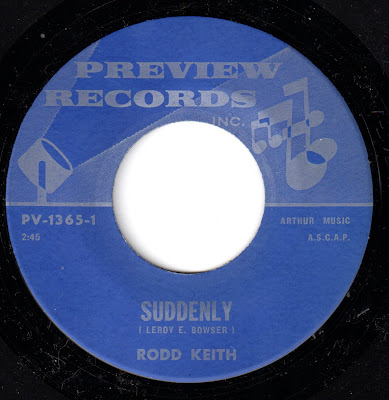 And here are a few more postings with previously broken files which have been repaired:

The Things One Finds On Three Inch Reels of Tape...
HORRIBLE!
CalypSong-Poem
Toby Deane
Posted by Bob Purse at 11:00 AM 2 comments: 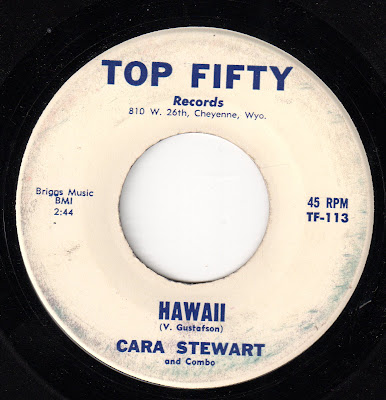 Another weekend, another college visit. As a result, I'll have to keep this brief, and also bypass the broken file updates until next week. Most people have probably had enough of the winter weather that's hit most of the states the past few weeks (not me - I love snow, and generally much prefer winter to summer, being no fan of heat - although I'm even more partial to spring and fall). However, bowing to the majority, here is a favorite singer of mine, Cara Stewart, offering up her tribute to "Hawaii", on the relatively rarely seen Top Fifty label, out of Cheyenne, Wyoming:

Unfortunately, this is not a twin spin for Cara, as the flip side is handled by Johnny Michaels, who I suspect may be the same singer who was sometimes billed as Jeff Reynolds, on records with a connection (as this one has) to Lee Hudson. This song also pays tribute to the 50th state, casting the islands as the home of the singer's "Lovely Lady". 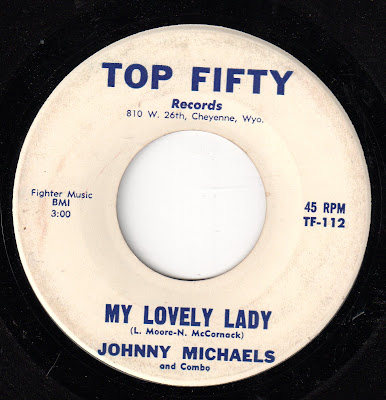