The ongoing updates to the broken postings will resume next time around.

Today, I have one of the more peculiar records from my collection. Its contents in and of themselves are not unusual, for those familiar with song-poems and with the labels involved, but their appearance on the Grand Recording Co label was, fro me, at the very least.... unexpected.

The AS/PMA shows Grand Recording Co to be a concern related to the much more well known Halmark outfit, and the small Chapel label that seems to have predated Halmark. This seems to be based on two things - one, the address for Grand was in the same metropolis - Quincy, MA, as Halmark, and two, the existence of the single record (an album) which AS/PMA was privy to when the website was a going concern. Presumably, the sound of that Grand Recording Co album was consistent with that of Halmark.

And that's what I thought I was getting. And when I listened to the most song with the most promising title on the EP, "We'll Never Ration Liberty", that's what I got. And that ridiculous Halmark sound continued into the second song of the EP. But then I flipped the record over.... And I heard two songs that were clearly from the great Preview label, including one featuring Rodd Keith that had a smoking backing track.

This provides more of a link than I knew of in the past between Ted Rosen's slimy business in Massachusetts (for I see no way that he wasn't involved, given the address of the "co" and the contents of the record), and the more talented - and somewhat more slick about their shadiness - folks at Preview. But beyond that, I have no insight into exactly what business dealings led to there being two West Coast song-poems on a New England label.

Regardless, it's absolutely an EP worth hearing, or at least (to these ears), three fourths of it is worth hearing. Let's begin, shall we?: 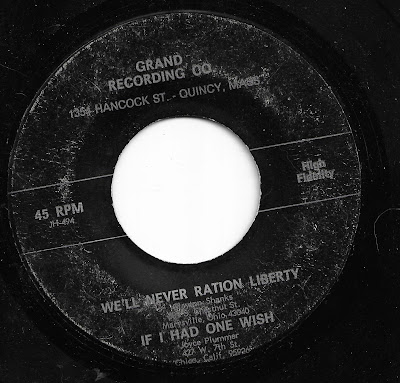 Leading off is the aforementioned "We'll Never Ration Liberty", featuring the voice of the man most often identified as Bob Storm - although there have been enough contradictions about that name and the Halmark voices to leave me scratching my head. And it's a great, ridiculously patriotic lyric paired with my all time favorite Halmark backing track, the one most memorably used for "Lady Off Pedestal at Notre Dame" (although here, it is stripped of the backing chorus, so Halmark clearly had multi-track reels of their recycled classic tracks.

The vocalist seems a bit bored at times - I've never heard him sound more like he's phoning it in. But the cranky lyrics - and the singer's choice to pronounce "Ration" with a long "A" - as well as that bouncy track, and a nice final note, all keep me coming back for more, again and again.

Next up is the same singer, happily enough singing over my second favorite Halmark track, the one best used on "My Hamburger Baby" (a song I love so much that I recorded a cover version!) In this, case, after a spoken introduction, we get "If I Had One Wish", one of those "we should all love each other" songs, long on platitudes, and completely absent of actual ideas for making things happen, featuring a much more Bob Storm-ish over-the-top performance.

Download: No Artist Named (Bob Storm) - If I Had One Wish
Play:

Let's flip the record over, shall we?

As mentioned, the flip side really caught me off guard. Within three seconds, I was thinking "This is a Preview production". And so it is. And I must say, it's not one I'd share if it wasn't part of an overall more interesting EP. Gene Marshall is professional as ever, but the song, lyrics and arrangement of "You're the One" are all deadly dull.

Download: No Artist Named (Gene Marshall) - You're the One
Play:

The biggest surprise was yet to come. The last track, "Love Me, Baby, Love Me", clearly features Rodd Keith. The lyrics leave a lot to be desired - and thereby leave the song to be only so-so, despite an effective vocal. But the backing track is great! It's a solid soul mover, featuring some great horns, sounding like something that would have been produced in Memphis in 1966. I'm certain I've never heard this track on a Preview 45, and I wish it had been used with material that lived up to its quality. 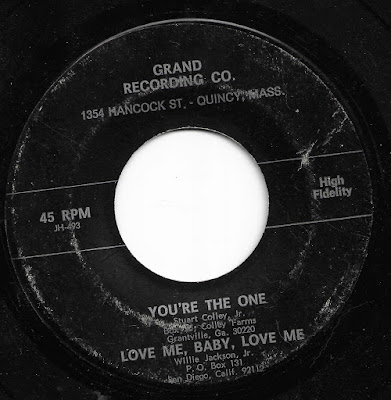 As has been the case for several weeks now, before getting to today's offering, I want to update you as to updates. I have moved back another month, and have now made new connections for all posts from October, 2014. They include: A Hal(l)mark Bob Storm special, a minimalist Mike Thomas number on Tin Pan Alley, a jawdroppingly ridiculous Gene Marshall record about Nixon, and an very late, and depressing, MSR effort by Rodd Keith, or, rather, Rodd Rogers. 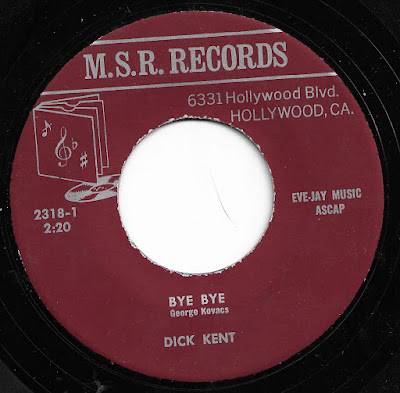 I'm just not much of a fan of this label, particularly its output after the death of Rodd Keith. But I know there are plenty of MSR fans out there, so much so that the compilations that were released a few decades ago were subtitled after the label.

Despite my general disinterest, I do find this one, "Bye Bye" to be a minor pleasure, a nice, bouncy, almost polka-esque number, sung with more gusto than it deserves by Dick Kent. The sing-songy melody here reminds me more than a little of the repetitive melodies created by William Howard Arpaia, for those who know about him. That is not meant as a compliment.

On the flip side, as she so often was with Dick Kent (or, if you prefer, he on her backside), is Bobbi Blake, singing a curious lyric titled "My Souvenir". Again, this is a nice vocal, but this one suffers, as to many latter-day MSR records, from the sound of a certain deeply chintzy, early synthesizer, a model which renders many of those records unlistenable, at least to my ears. 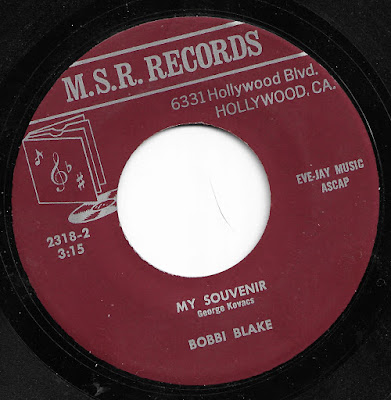 Hilly-Dilly Billie (With a Rainbow Twist)

As my ongoing repairs to the earlier posts at this site continue, today, I can announce that I have fixed all four posts from October of 2014, which together feature a whopping eleven song poems. These include a Norm Burns number, Three songs from a Star-Crest album, a Brosh EP and a Rod Rogers special. 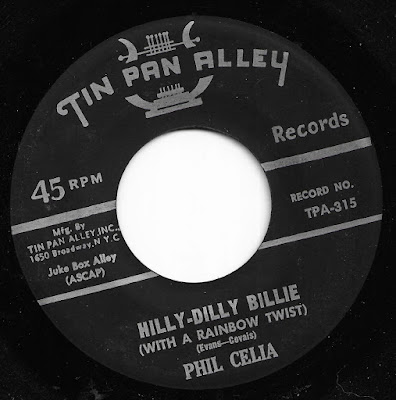 One of the few things I've found I can truly count on in this song-poem collecting game is this: If i find a Phil Celia record which features a ridiculous title, it's going to be a winner. A quick listen through my previous Phil Celia postings will prove this to be the case. (Note - several of the links within those posts are not yet repaired.)

Today's feature is no exception. I have no idea what "Hilly Dilly Billie (with a Rainbow Twist)" meant to the song-poet, but the combination of that song's lyrics and Tin Pan Alley's minimalist version of Rock and Roll (which to my ears owes more than a bit to supper club combo music), results in something eminently listenable and very enjoyable. Phil never gives any indication that he knows what he's singing is ridiculous, as he (as always) gives the song and the lyric his all.

That is not to say that everything Phil Celia (let alone Tin Pan Alley) touched was turned to gold. "The Night is Beautiful", on the flip side, is almost the quintessential dull, uninspired song-poem lyric and equally creativity-free setting. 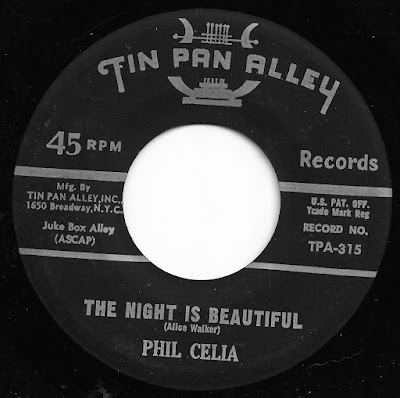