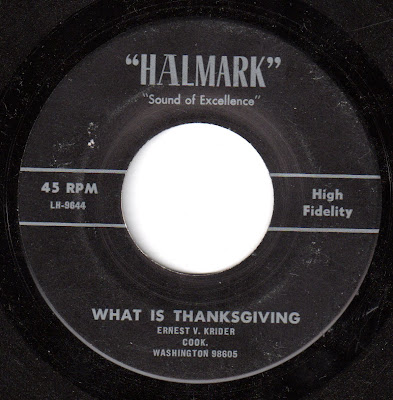 Happy Thanksgiving! In case you were wondering what Thanksgiving is, here are the fine folks at Halmark Records, to offer up their version, one I find nearly completely unlistenable. Actually, this song's lyrics present Ernest V. Krider's interpretation of the answer to the question, "What Is Thanksgiving?". Your own mileage may vary:

The flipside, "Perfect Living", is notable for being sung by someone who doesn't sound (to me, anyway) like either of Halmark's usual male singers (Bob Storm and Jack Kim). Also, Halmark often listed the author's name and address on the label, and this is the first one I've ever seen that wasn't written by someone in the USA, being composed by Ernest L. Martin, a resident of West Germany at the time: 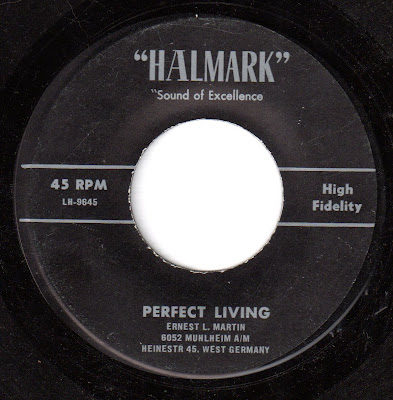 I'm dreadfully late this week, but I think that not only will today's posting make up for it, but an on-time posting for Thanksgiving, this Thursday, will also be worth making time for. 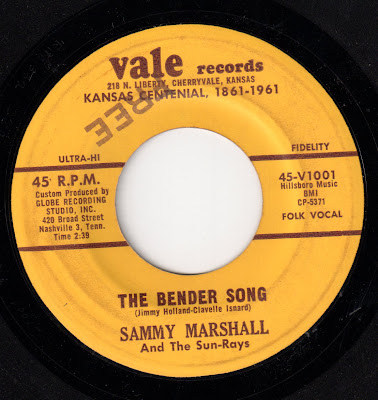 I had great hopes upon getting this record, and while the original reason for my excitement did not pan out, the actual subject of this record is in no way a let down. I did think that maybe a record called "The Bender Song" would be about binge drinking, and was really interested in hearing what Sammy Marshall would do with that subject.

But it turns out that the song is actually about a famous 19th century family who lived in Labette County, Kansas, and who are known to history as "The Bloody Bender Family", due to their having been serial killers. You can read about them here.

Sammy Marshall and the Sun-Rays (how's that for a mismatch of group name and song subject) sound almost giddy in singing about mass murderers, as you'll now hear:

Good to know that this record was FREE!

What's even more amazing is that this 45 was meant to promote Kansas, on the occasion of the state's Centennial, which is spelled "Centenial" on the label!

The flip side, "Come to Kansas", which was also co-written by the wonderfully named Clavelle Isnard (along with Jimmy Holland), can't possibly live up to the song it is paired with, but it's got a typically strong Kris Arden vocal, and more peppy accompaniment by the Sun-Rays: 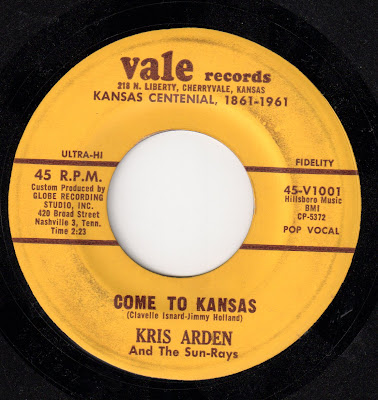 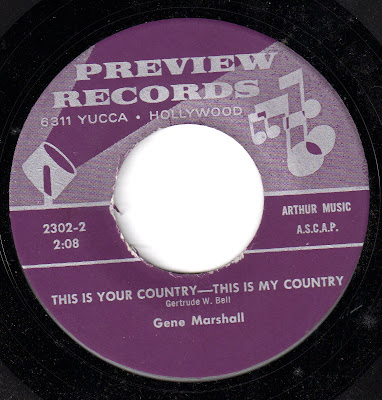 On this national and international day of remembrance and patriotic thoughts and feelings, I thought I'd share a song titled "This is Your Country - This is My Country", sung by the always enjoyable voice of Gene Marhsall:

The flip side, "The Hanging Tree", couldn't be on a more dissimilar subject. I'm most taken here by the way Gene Marshall sounds more or less happy during the first few lines. Perhaps he was sight-reading it, and didn't realize until the third or four lines that he was singing a first person ballad by a man about to be hanged. That ridiculous synth sound doesn't help, either, but I'm not sure if there's ever been a record that that particular sound would improve:

On a side note, regarding the authors of these lyrics, does anyone name their children Bertha or Gertrude anymore? 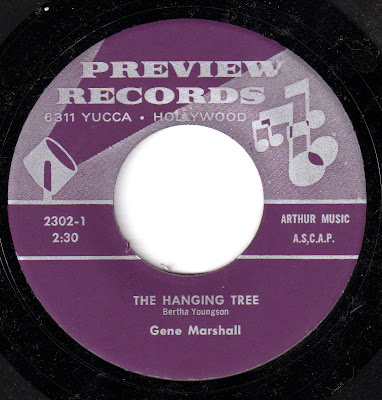 The Country Side of Rodd 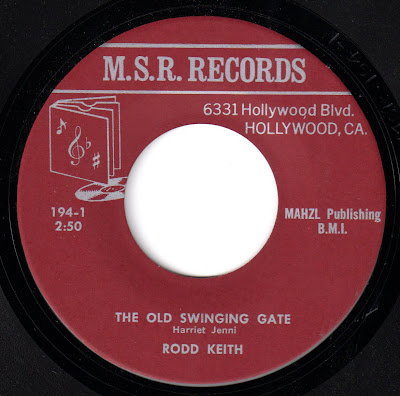 Things have been crazy busy the last week at home and work, so I'm a little late with this week's record, plus, I really don't have the time to offer up much comment, aside from pointing out that the Chamberlain backing heard on this early MSR release of Rodd Keith's "The Old Swinging Gate" is not exactly the best accompaniment to what appears to have been an attempt at a countrified vocal performance and setting:

And here's the flip side of the same, "Treasure": 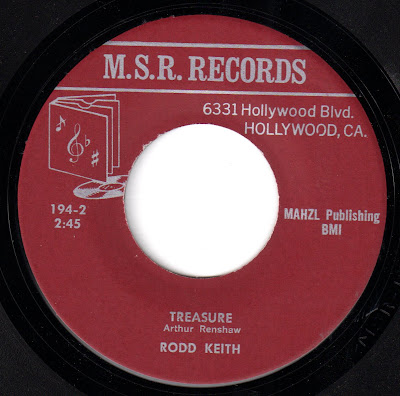