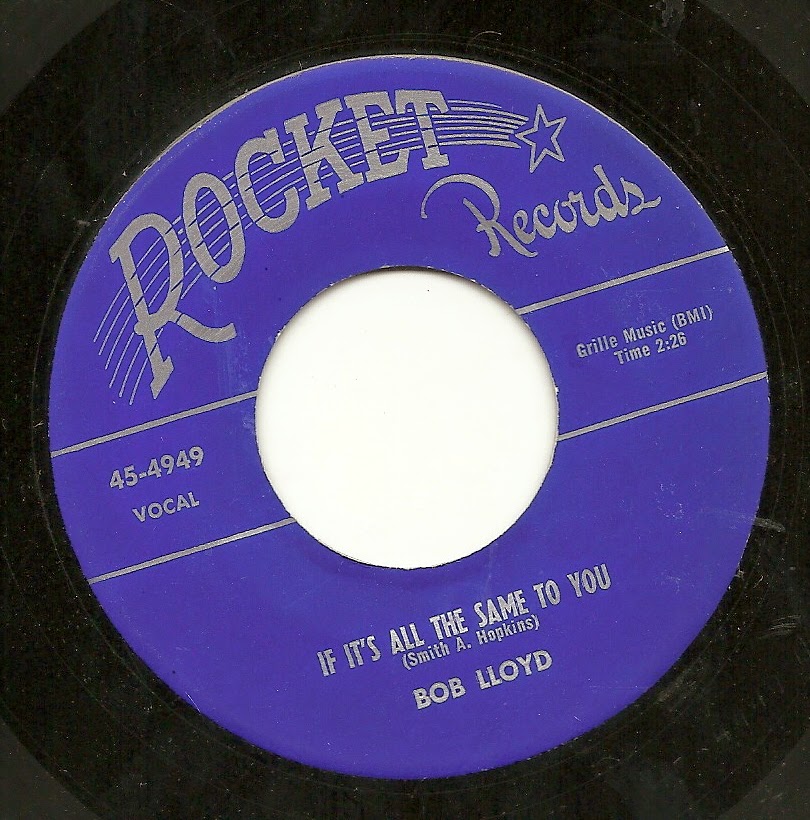 Somewhere out there is, or was, a man named Bob Lloyd. His prominence in the song-poem world rests on just one side of one record, the thoroughly amazing "Our Hearts Were Meant to Beat as One". This song was on the first two song-poem compilations, and if you haven't heard it, I encourage you to seek it out. It is as incompetent a performance - by the pianist, but much more outlandishly, by the singer - as there is on a song-poem record.

And while the vocal on "If It's All the Same to You" is not as ridiculous as on "Our Hearts", it also confirms, in my mind, that Bob Lloyd was not meant to be a balladeer. Simply put, this is a truly bad vocal performance. Lloyd's sense of pitch is not developed, and his tone doesn't lend itself to this style of song.

On a separate note, I'd like to point out the unusual name of the song-poet - Smith A. Hopkins - and express my curiosity as to whether he was related to my favorite song-poet ever, Edith Hopkins, who wrote one of those songs sung by Bob Lloyd on the Dial label.

Download: Bob Lloyd - If It's All the Same to You
Play:

The flip side, "Slow Train Boogie", is a masterwork in comparison with its flip side. Lloyd still can't really stay in tune, but this material doesn't particularly require him to. The backing band doesn't quite have the energy that the song requires, but the pianist is trying, and the rockabilly guitar solo approaches the passable level, which is a small miracle.

Who are you - or were you - Bob Lloyd? A grateful batch of song-poem enthusiasts thank you, wherever you are! 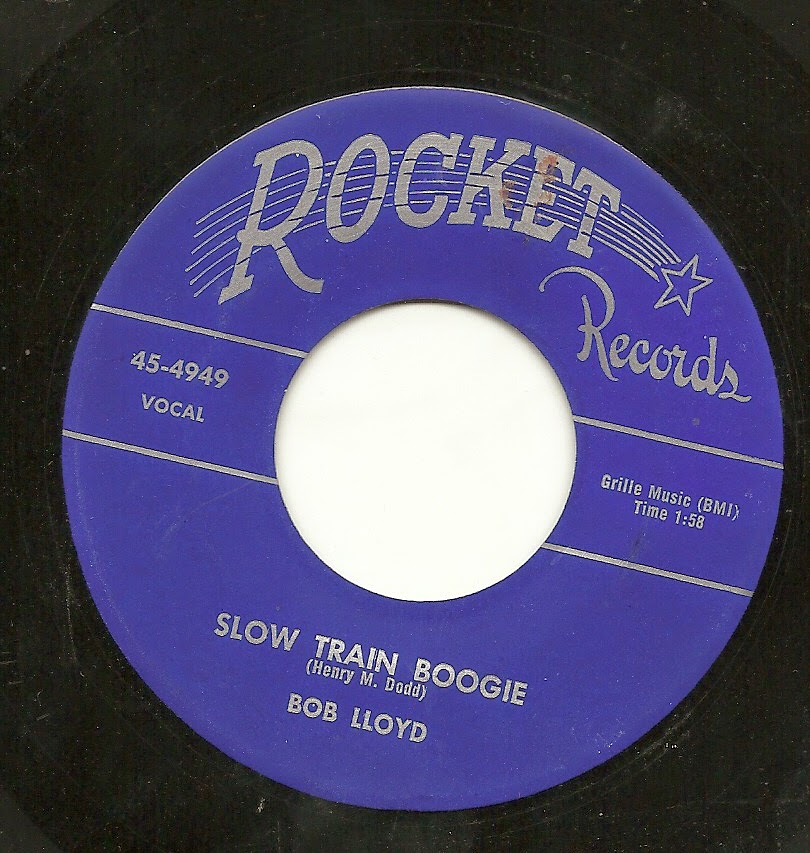 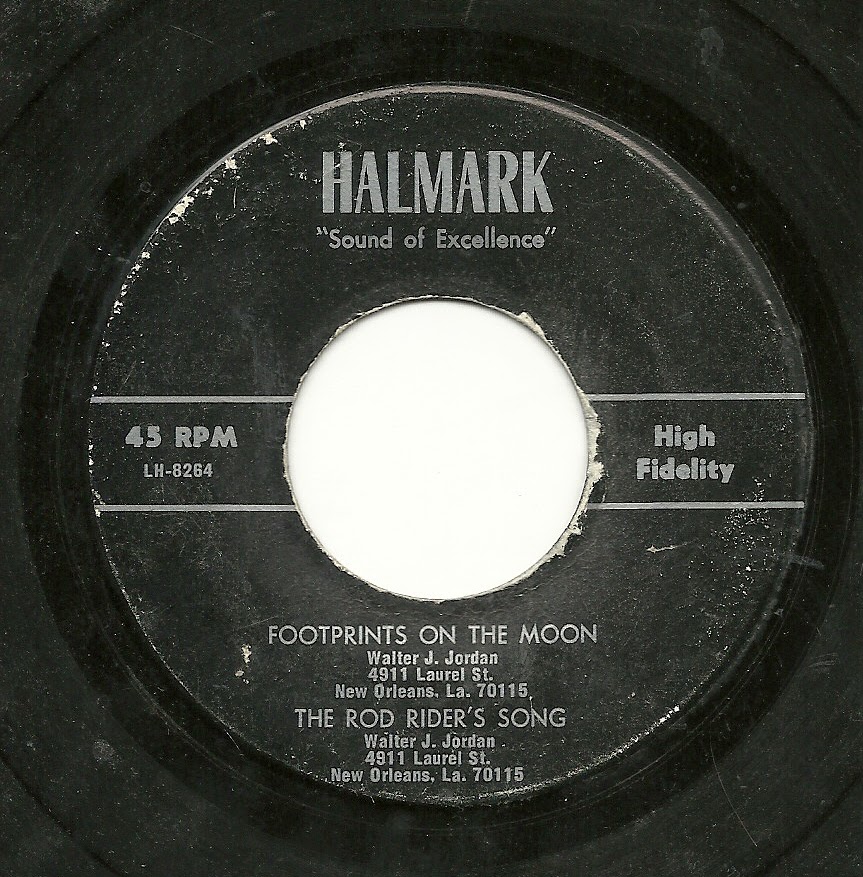 The backing tracks that were used by the folks at Halmar﻿k weren't always just random moldy sounding orchestral monstrosities and other outdated material which seemed 20 years older than the records for which they were used. As Sammy Reed pointed out last year, a few of Halmark's backing tracks were clearly originally made to back up cover versions of songs from the late 1960's. Specifically, he identified the music beds for "I'm Gonna Make You Love Me", and "By the Time I Get to Phoenix" (the latter of which was driven home even more strongly by the discovery of this record).

Those songs had complex enough structures and standard enough settings that the fact that their backing tracks were for those specific songs might never have occurred to me. The resulting songs, therefore, don't particularly song like the tunes for which the backing was created.

The same cannot be said for today's astonishing and wonderfully odd feature, "Footprints on the Moon". That's because the song over which this track is built has a unique sound, arrangement and chord progression. From the opening bars, it's clear that the backing track used was meant for use with the song "Gentle On My Mind", with every aspect of it sounding like a fun-house mirror version of the hit song version by Glen Campbell (except that the pristine instrumental performances of the original have been replace by uninspired hackwork, led by a banjo part which sounds like it's being played by a student new to the instrument). Even the voice of the singer - who I don't recognize as a Halmark regular - has a passing resemblence to Glen Campbell's timbre.

I can't imagine a writer being satisfied with this result, unless he was completely unfamiliar with the country hits of the day. But then again, this is a writer who's peculiar lyrical conceit here is to have a title which focuses on the fact that men had stepped on the moon, but a lyric which itself focuses almost entirely on the man who DIDN'T step on the moon - it's primarily a complaint that Michael Collins didn't get the attention or praise he deserved for taking the other two up to the moon and "back to their native land". A worthy focus, I suppose, except that the writer overshadows Collins himself by continuing to focus on the fact that two others left "Footprints on the Moon". Nicely done.

This just strikes me as the height of contempt for one's customer, more than even the typical song-poem company towards its song-poets, and, as I titled this entry, plagiarism, plain and simple.

And a weirder record I don't expect to hear this spring, that's for sure.

For some more typical Halmark weirdness, next up we have the immortal Bob Storm, using the aforementioned backing track to "By the Time I Get to Phoenix", singing the words of the same song-poet as "Footprints on the Moon", in this case, a first person ballad about life on the road as a hobo. It's called "The Rod Rider's Song":

Flipping the record over, we find two other absolutely average and typical Halmark tracks, each with one of the backing tracks that Halmark collectors will know from the first bar or two. First up is Jack Kimmel with "Look at Me":

And then there's Bob Storm again, oiling up that voice of his for a turn at the song "Hurt and Rejected": 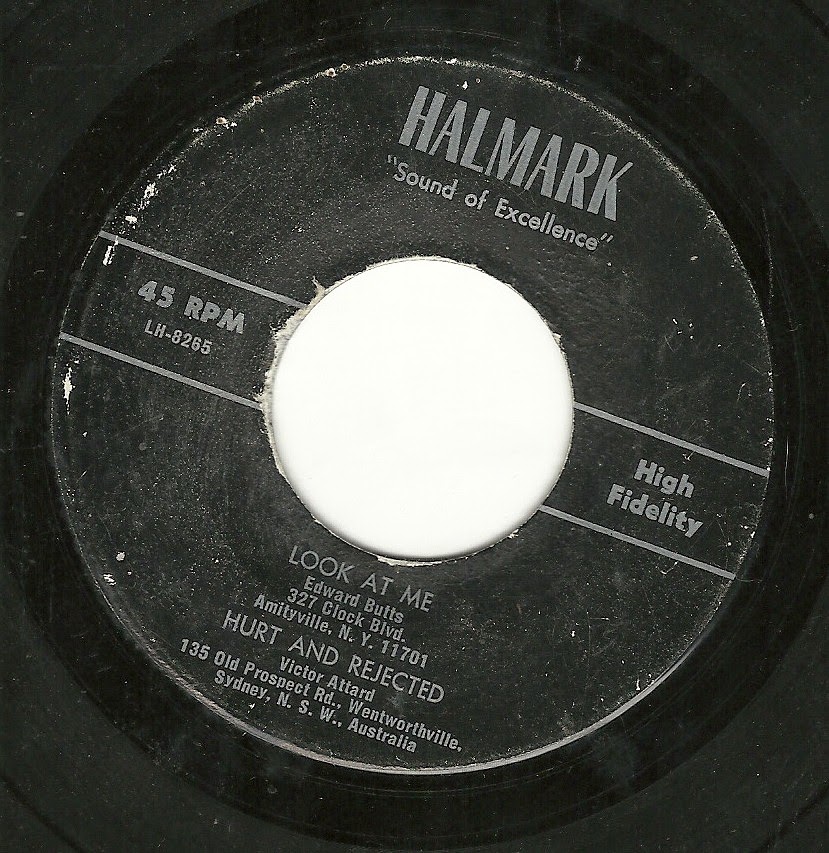 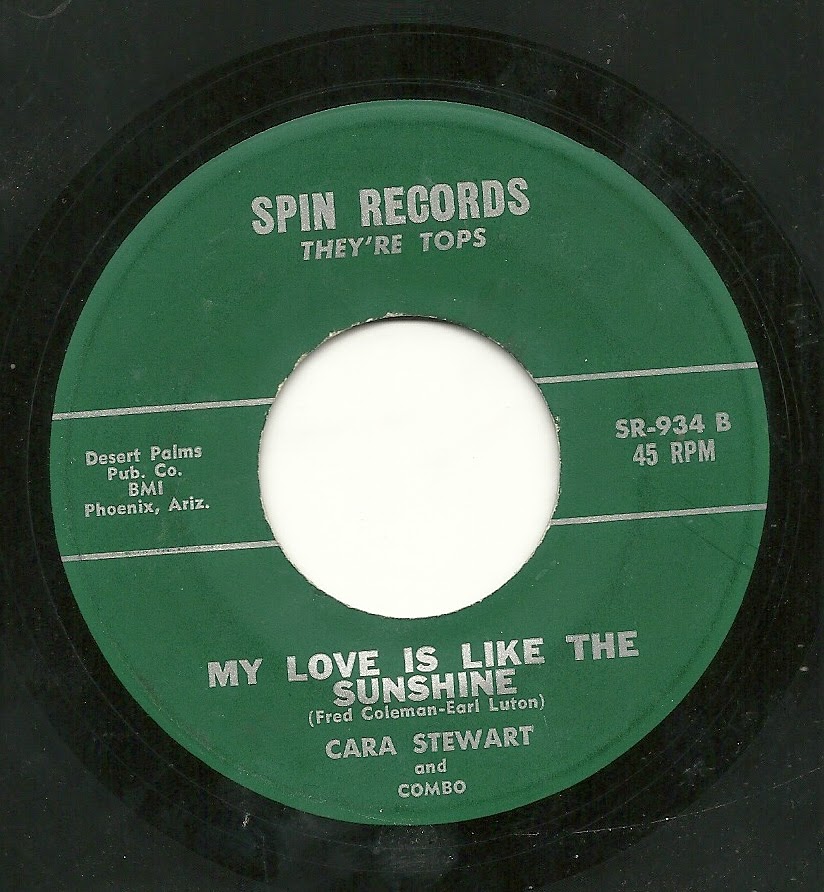 There's not a lot that I have to say about Cara Stewart that I haven't already said on this site. There are some who have complained that her records with Lee Hudson each fit into one of a few templates (I would add "with notable exceptions"), and I don't know that I disagree, but when those templates are so exquisitely lovely and/or curiously different than the mainstream, what is there to complain of? I don't hear people saying the same things about Lee/Cara's clear inspiration, Les Paul and Mary Ford, who, despite producing recordings which were similarly limited in terms of varying styles, still managed to make several of the best records I've ever heard.

Here's a typical sultry Cara track, co-written by Earl Luton, who at some point also had his own song-poem label, Lutone, which was featured here just one month ago. Here's his song, "My Love is Like the Sunshine":

On the flip side, the only slightly less wonderful "Could Happen": 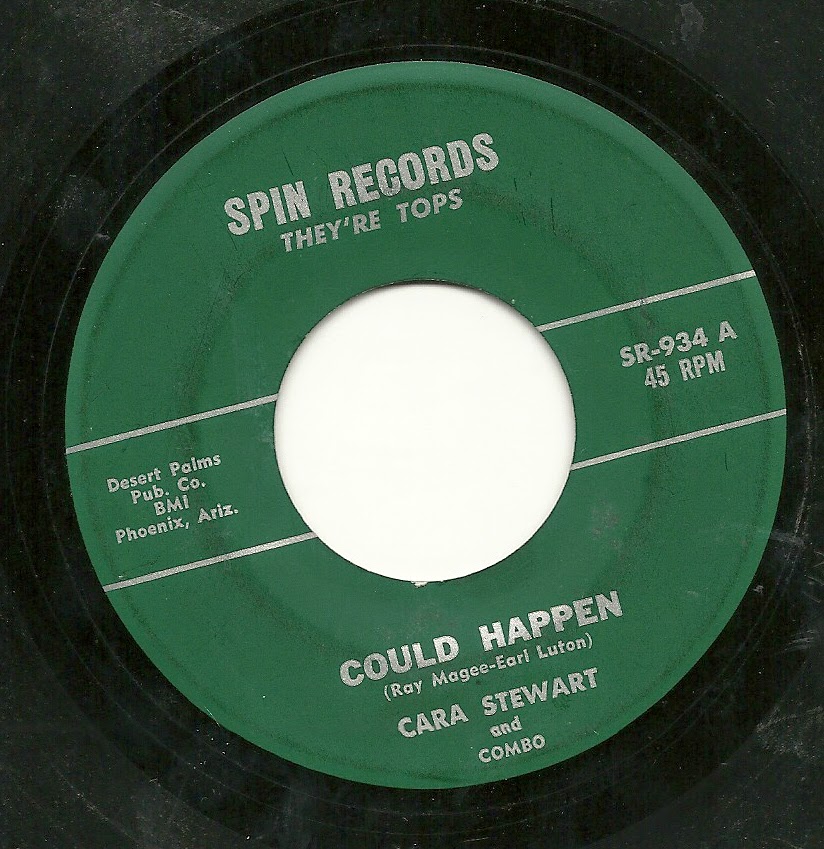