Every now and then, a song-poem becomes available that I really have to try and get, just because of the title. It could turn out to be a good or bad record (bad in this case largely meaning uninteresting), but sometimes the title itself is the show.

This moment I saw this title was one of those moments. I own a lot of religious song-poems, and have heard many more from others' collections. I'm not sure I've ever seen a more poorly considered title, though, then the one I'm offering up for this Good Friday. It just seems to me that there are certain turns of phrase that you might not want to connect with certain Holy names, images and things. And I'm guessing I'm not alone in saying that when it comes to Jesus, one phrase to avoid might be "Hanging Around". And yet, here we have it: 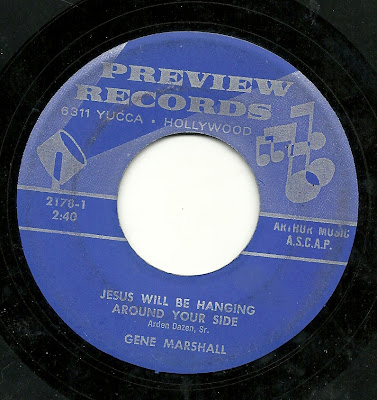 ﻿The song itself does not turn out to be a stellar one, but it is an interesting performance, in that the construction of the remarkably brief, even skimpy poetry of the lyric writer seems to have resulted in some rather complex arrangements by whoever set it to music. As a result the one-time-through-and-done process appears to have been a failure - the usually reliable Gene Marshall struggles through the performance, missing an entire word ("be") the first time he gets to the title phrase, and sounding over his head at a few other points, as well.

Actually, the most remarkable thing about this record may be the song on the b-side, "Watching Sally Grow". Seriously, you have to listen to this record, it's a chintzy attempt on the song-poet's part to glom onto Bobby Goldsboro's big hit, the sickly sweet "Watching Scotty Grow", written by Mac Davis. The lyric is constructed in﻿ much the same way, and covers much of the same ground.

Actually, it's more obnoxious than that: it starts with the exact same phrase "there he/she sits with a pen", the opening verses end with "well it's not too bad, 'cause she's my girl" verses "but it ain't too bad, 'cause that's my boy", and the rest of the song also parallels those of the big hit record (although this set of words might be considered an improvement; we're not informed that "BLRFQ spells mom and dad") , both end with the same phrase, "Me and God are watching (Sally/Scotty) grow".

I can imagine a lot of hit songs inspiring rip off from the song-poem community, and even posted one where the "lyricist" lifted an entire verse from the song "Nobody's Child" for her own submission to a song-poem company, but "Watching Scotty Grow", with it ripe stench of tripe emanating from every moment, would not have struck me as one worth plagiarizing. Sheesh.

It's also worth noting that most Preview song-poems have the same publishing information as the A-side of this record, Arthur Music, while this side boasts Liberty State Music, another oddity.

Just another weird corner of the weird, weird world of song-poems. 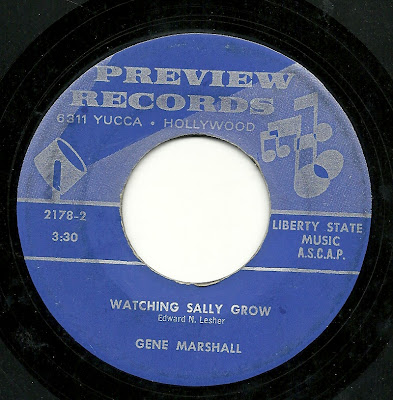 Not Every Song is Meant for a Mixed Vocal Trio... 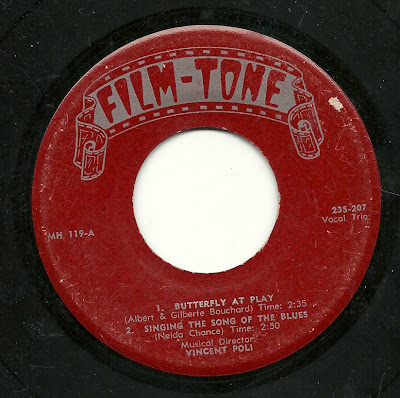 Today, the second half of a little two week jog into the true fringes of the song-poem world, and another EP from the folks at the Film-Tone label. Clicking on the Film-Tone link at the bottom of this page will take you to the three previous EP's I've shared from the label, as well as the very little I know about the label. The key point here is that the only credits you'll typically find on a Film-Tone 45 are the director credit (usually Vincent Poli) and the fact that the performance is by a vocal trio.

This trio, and the group behind them, play and sing as if it was still the 1930's, and regardless of the lyric, it's always the same two men and a woman. Often, this works okay, but other times, I have to wonder what the song-poet thought of the results of his or her submission - more on that in a bit.

Within the limits of their chosen genre, the trio works well enough on the first song, "Butterfly at Play", although I swear I hear a phone ringing at the 1:46 point - it would be a perfect summation of the quality of song-poem industry products if that's exactly what it is, and if they kept the take anyway:

Then there's the awkwardly titled "Singing the Song of the Blues", which also works, I guess, with this arrangement, although it features some truly stultifying lyrics, particularly those song in the solo section by the bass singer, who curiously only sounds like a bass when he's singing alone - the rest of the time his voice seems considerably higher.

Side two kicks off with "Restless", which features some more words from the creativity challanged end of the lyricist spectrum, and, unusually, some unsure moments of vocalizing from our trio, brief moments where the three part harmony seems close to going off the rails.

And finally, the one referenced in the title of this post, "Everybody's Girl". These lyrics fairly scream out for a solo male performance, or at least a group male performance (or, on the off chance that it was meant to reflect a gay relationship, at least a consistent performance from vocalists of a single gender). And sure enough, it starts out with the two men singing. But then, quickly, the woman of the trio comes in and takes over the melody for the remainder of the song. I have to think this was not what the lyricist had in mind, and although I suspect it was just another job for this particular singer, I do wonder, while listening to this piece, what the hell she might have been thinking, while taking on the lead part in this particular song. 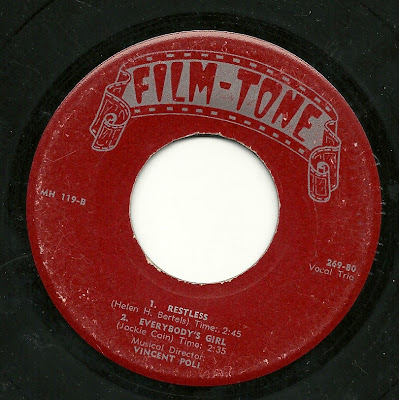 When I Write My Noval 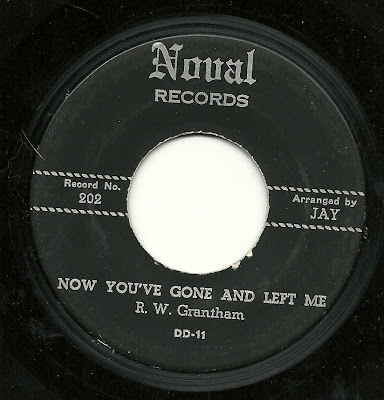 If the main focus of this site is a corner of the music world that is definitely on the fringes (and it is), then today's post and record lie on the fringes of that fringe. Because today, I'm bringing you another record born of someone's decision to employ the mysterious staff of the deeply obscure Noval label.

With their simplistic background arrangements (usually distinguished only by the lovely presence of one of my favorite instruments, the vibraphone), lack of named artists (probably to protect the exceptionally bad singers from embarrassment) and downright bizarre crediting system (never more than an "arranged by" note, followed by a first name), Noval stands alone in terms of the sheer depth of their weirdness.

I'd love to know when these records were made - they sound like they were produced in the late '40's, but I'm guessing that's not the case. On the first side of this disc, we have "Now You've Gone and Left Me", which sounds very much like a reject from Tin Pan Alley (the legendary song-writing location, not the label), in structure, arrangement and performance, with a vocal performance sounding very much like a read-through demo performance from our mystery man. At least it's almost peppy, at least compared with much of Noval's output.


On the flip side is a drippy love ballad, "I Love Only You", with words that wouldn't be out of place in a 7th grade love note - so simple that they make the A-side's lyric sound like Shakespeare in comparison, although I hasten to point out that both sides were written by the same person. 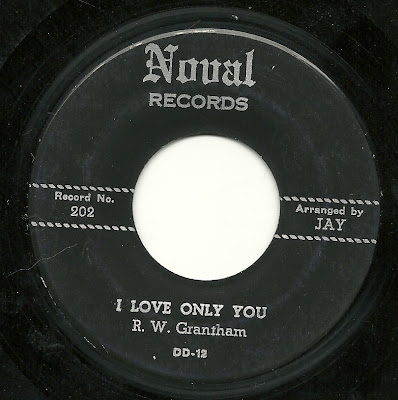 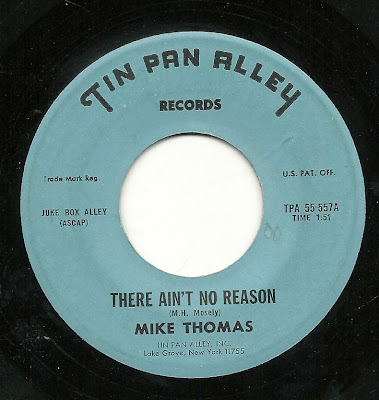 I sure do enjoy Mike Thomas. Admittedly, he couldn't really sing that well, and his garage-band-lite backing band always sounded like they needed another year or so to rehearse before going into the studio. But the end results of their collaborations are often quite entertaining, although perhaps not for the reasons that the song-poets envisioned. There is often a "what the hell is going on" quality to these records that brings me back for more.

On "There Ain't No Reason", we're treated to an opening with a hi-hat break that seems to predict a vo-de-oh-do song. But no, it's more of the same three piece combo stuff Mike always seems to be singing over, and his nasally warbling quickly gives way to - of all things - a bass solo! And although the guitarist fails to cut off one of the stop-chords, they kept going anyway.

Mike sings the same verse again, and then we get the same bass solo again, with some borderline creative drumming this time (the drummer seems to be wishing for that vo-de-oh-do number). Finally we get a different verse, with a note a 1:44 which seems to have been pulled out of a different song entirely, and the whole thing quickly comes to an end, just 112 seconds after it started.

The flip side, "I Ain't Living, I Ain't Loving, I Don't Know", is a slow blues, a music style which would seem to be about as far outside of Mike Thomas' wheelhouse as would be Chinese Opera. The guitarist is going to town behind him, and actually manages to throw in a few passable fills, although he seems to struggle with the seemingly simpler task of staying on the beat, and I do wish he'd chosen a more aggressive tone for his guitar, rather than the weaselly, tinny sound heard here. 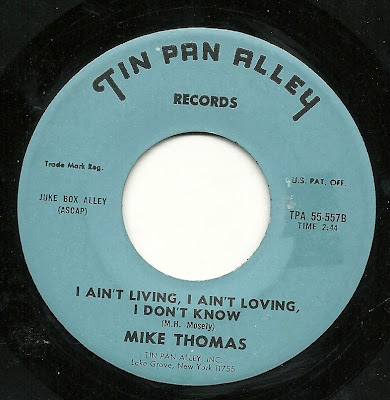