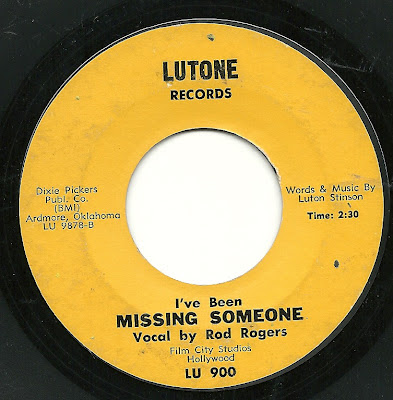 Like severa﻿l of the larger song-poem companies, Film City would allow its products to be "released" on vanity labels, most of which tended to be tied to the individual song-poets whose materials would show up on those labels. Here we have one of the tiniest - Lutone Records, named for the writer of the songs, Luton Stinson, who interestingly, is listed as writing both the words and music of both songs, the latter being a real rarity in this world, where the tunes and arrangements were the responsibility of the song-poem companies' staff members.

It would appear that this may be the only record to come out on the Lutone label. It's the only one listed at AS/PMA, and I can't find any reference to any record on this label, aside from this one. I'd certainly correct myself, though, if anyone knows otherwise.

Assuming that Luton Stinson did write the words and music here, he (or she - I'm not actually familiar with this name) did a decent job on the song on the b-side, "I've Been Missing Someone", and then turned it over to the right company, who gave it to the right man, Rodd Keith (aka Rod Rogers), and his one man band work on the Chamberlin.

This is a nice, slinky little number, with a sinewy tune, sung with an appropriately atmospheric tone. Rodd could easily be singing this number at a nightclub - this song would certainly pull me in, in such a setting. And the Chamberlin work here doesn't draw attention to itself here - sometimes, that's the fun in Rodd's film city records, but on a nice song like this, its better that the backing just does it's job without becoming odd or goofy.

Sorry about the beat-to-hell sound of parts ot his record. I thought it was nice enough to share despite its condition.

The flip side, "I Had a Dream", features Rodd at his most lugubrious and unctuous - not quite to Robert Goulet levels, but certainly on that spectrum. It's not a side of him (or anyone) that I enjoy much, except from an ironic standpoint, but your mileage my vary. 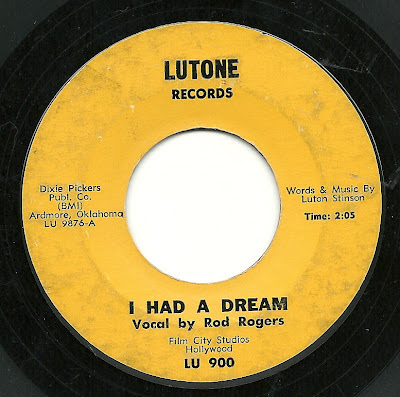 Before beginning today's post, I wanted to share that I have offered up (at WFMU), an essay I wrote some time ago that I'm very pleased with, about some of the reasons behind my collecting passion. Those interested can find it here. 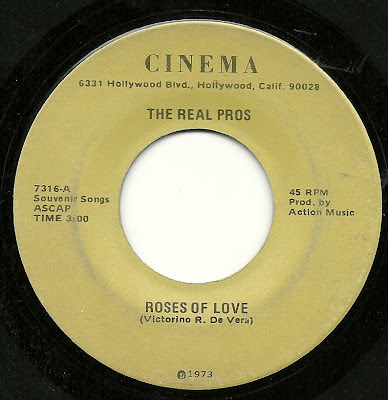 Today, let's hear it for The Real Pros, that anonymous gathering of song-poem professionals pulled from whoever happened to be available for the sessions that week. And this week's feature actually pairs up two very different sides of the "group". On the A-side, we have that earliest of Cinema/Real Pros sound, the one-man-band with the home studio, play-it-yourself rhythm and chord organ, on a number called "Roses of Love".

The lyrics here strike me as staggeringly unmusical and stupifyingly non-sensensical at times. Is there a way to fit "If I'm only a poet, every poem I compose will be from your name" into a melody, ANY melody, and make it work? Also notice that the statements are "if I'm only a king" and "if I'm only a poet", and not "if I was...", which would be the correct opening, given that the writer is contrasting these things with what he is, which is, wait for it "only me".

And here's where it really falls apart for me, because being 'only him', he is telling his love that the only thing he can offer is something free, which he then identifies as.... Roses? I've bought Roses - I even once worked in a flower store. And I know this: Roses aren't free. And I haven't even gotten to the moment when the singer - who sort of reminds me of Dick Kent, although I don't think that's who it is - starts talking, something that's usually the sign of lyrics that were too clunky to fit to music at all.


Curiously, the flip side, "Broken Hearted" clearly features a different song-poem factory sound, that of the Preview label, specifically the Preview of Rodd Keith. This is a VERY late-era Rodd offering, dated 1973, and as my friend Stu has pointed out, it seems likely that Rodd took some of his Preview backing tracks with him, as he would certainly have been at MSR by this point.

This is Rodd in his C & W guise, with the hick edge to his voice, and certainly the better of the two songs and performances. 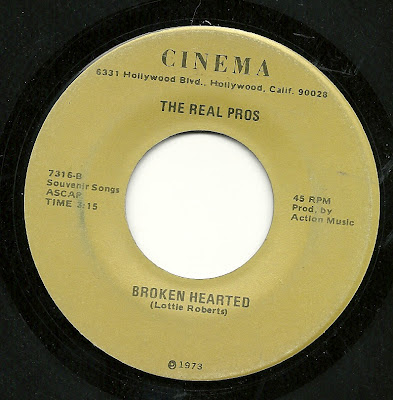 Email ThisBlogThis!Share to TwitterShare to FacebookShare to Pinterest
Labels: Cinema, Rodd Keith, Song Poem of the Week, The Real Pros 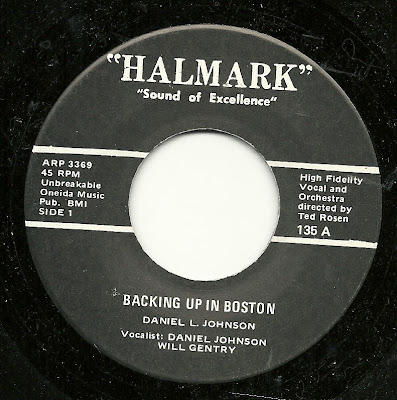 My inclination was actually to title today's presentation "A Halmark Record Like No Other", but since I haven't seen every Halmark record, I'm not going to make that assumption. But I know I haven't seen another one like this. What we have hear is clearly a vanity recording of a gentleman singing his own song, accompanied (very likely doing it himself) by a single guitar.

To hear any "real live musician" on a Halmark track - Halmark being the home of the canned, discarded backing track over which the house singers would sing the lyricists' offering - is startling. It's also jolly fun to see this solo performance carry the credit "High Fidelity Vocal and Orchestra directed by Ted Rosen".

As to the fun to be had listening to Daniel L. Johnson singing and playing his song "Backing Up in Boston", well, that fun is certainly there to be had, but I'll leave the discovery thereof to the listener!

For the flip side, it's back to the Halmark salt mines, for a tried and true backing track, one I've heard on at least a dozen of the label's releases, over which we have the typically shrill stylings of house tenor Jack Kim. I will admit that I have listened to "Time That I Take Out" three times today, and while I recognize that the lyricist (the wonderfully named Preston Prescott) is expressing his reasons for leaving his relationship, his wordy expressiveness leaves me gasping at times, unable to quite figure out the specific meaning of some of his phrases, including the one in the title.

Oh, and technically speaking, Ted Rosen didn't direct the High Fidelity Orchestra heard on this side, either. 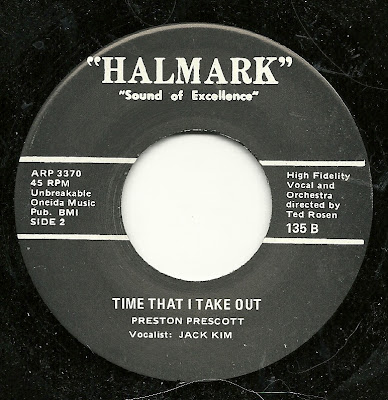 Space Age Babes I Have Known 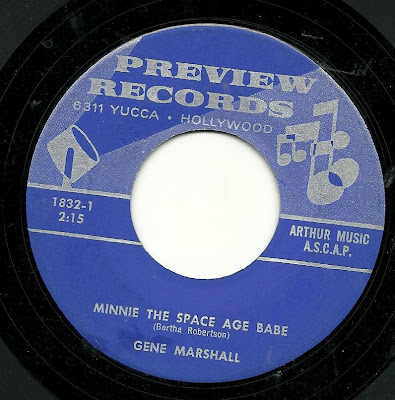 Some days, it must have been downright fun to be working at a song-poem company. Imagine Gene Merlino (AKA Marshall) picking up the music for today's offering, and seeing the title, "Minnie the Space Age Babe". Listening to the arrangement and performance, it's clear to me that this was a title that inspired the creative people behind the scenes to do something worthy of that title. The composition and arrangement here fairly scream out "Rodd Keith" to me, and everyone involved sounds happy to be there.


I can say exactly none of the same things I just wrote about "Minnie" with regard to the flip side, "What is a Man?", one of those painfully earnest, ridiculously ponderous lyrics, and one which got the setting and performance that those lyrics required. The results are, in my opinion, just deadly. 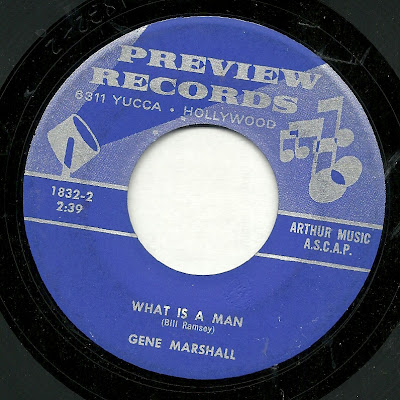