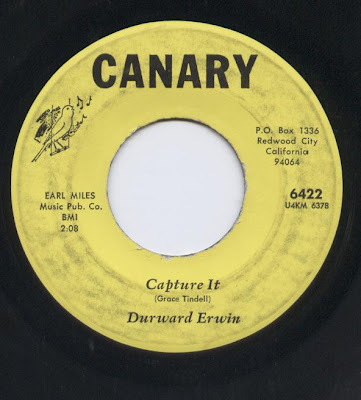 I thought I might touch from time to time on the smaller labels that are represented in my collection. The Canary label is listed in the ASPMA website, but I wouldn't be surprised to learn that it was more of a vanity project than a true song-poem outfit. It seems to have been largely set up to produce records of the compositions of Earl Miles, as well as a few other writers. In fact, at the time that ASPMA stopped being updated, the company remained in the hands of someone from the Miles family. Many of the records on Canary were performed by Durward Erwin, who has one of the more interesting names found on song-poem or vanity labels.

The production values are higher here, as I've found them to be on several smaller labels (as well as the labels that were subsidiaries of places such as the Globe family of labels), and as a result, the songs tend to sound more professional than much of what I've shared here. On the other hand, today's offerings fit well into that brand of early '60's pop music which was all over the MOR stations of the day, and your tolerance for that style will probably dictate your enjoyment of this record. Here's a song by another Canary author, Grace Tindell, "Capture It":


And here's a tune by the aforementioned Earl Miles, "A Girl Named Sorrow", sung again by the dulcet pipes of Durward Erwin: 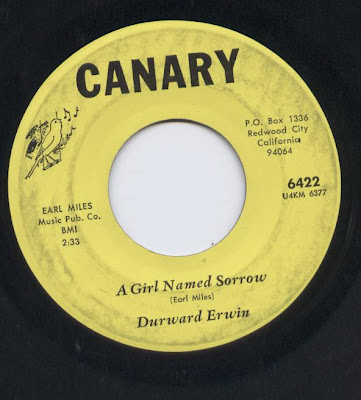 I wanted to alert anyone reading this blog to the fact that a previously largely unheard MSR album, from circa 1969, has been posted at the Houseplant Pictures Studio site. All the tracks - I think there are 18 of them, all of which feature either Dick Kent or Bobbi Blake - are available for download.

The home page for the site is at:

Click on the front page and you'll be taken to the song-poem album!

My Song-Poem of the week for this week will be posted tomorrow. It will be on a label and from a singer which have never been offered on this site before.
Posted by Bob Purse at 1:17 PM No comments:

Sammy At the World's Fair 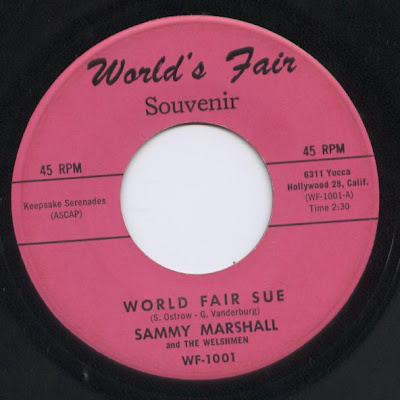 Well, with the world about to find out if my (nearly) home town of Chicago is going to host an Olympics, I thought I'd offer a record which had its inspiration in the World's Fair, an event Chicago hosted twice in the last 120 years. I know that's a slim connection, but what the heck...

Judging from other records released on this vanity label (part of the Globe family of labels), this was probably inspired by the 1964 New York World's Fair.

It's standard issue Sammy Marshall, which can be enjoyable in small to moderate doses. Here's one side, "World Fair Sue":

This is also one of the few song-poem records to be issued with a picture sleeve, which I unfortunately do not own, but there's a copy of it here.

The other side has considerably more energy, and I'm guessing will be the more popular of the two. Here's "World's Fair Wiggle Walk": 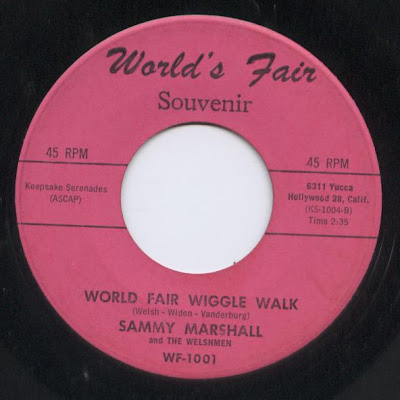 Email ThisBlogThis!Share to TwitterShare to FacebookShare to Pinterest
Labels: Sammy Marshall, Song Poem of the Week

He's Got a Reputation! 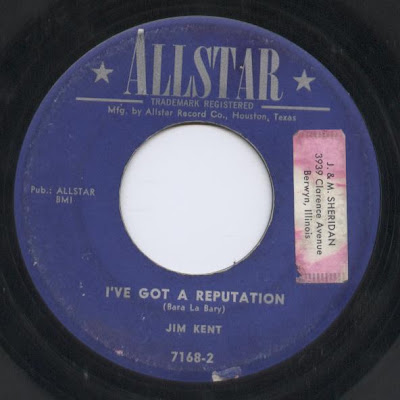 Here's one I've loved from the first listen, at least a decade ago, and the only reason I hadn't shared it here is that I thought it had been part of the ASPMA downloads that used to be available. I now see that this wasn't the case.

It's called "I've Got a Reputation", by Jim Kent, on the Allstar label. I find this record both great as a slice of late 1950's rock and roll AND as a downright peculiar piece of vinyl. Really - what exactly is going on here? It sounds like it was recorded with microphones at the other end of the room, or perhaps, given the sonic quality, at the other end of a hallway.

I think maybe that's a very young Sammy Marshall singing (this record is from about 1958), under the name of Jim Kent, and photos of the two of them, from the ASPMA website, show some similarities, but I'm not sure.

The rockabilly tendencies of the guitarist don't exactly gel with the lead singer's smooth, crooning style, and the understated drumming, while fairly wonderful in its own way (I think there's a cymbal in there, but if there is, it's soft enough to get lost in the surface noise!), strikes me as sounding like its part of another record entirely. Then there's the female vocalist, who must have just stood around, after her opening comment, for the point at which the song was almost finished.

Be sure to listen for the last drum hit, after the rest of the song seems to have faded out.

The Allstar label appears to have been almost as fascinating as the Fable label. You can read much more about it, AND see a picture of both the performer and author of this song, here.

The flip side, "You Should Have Stayed With Me", sports the sort of title I'd expect from a Laura Branigan or a Celine Dion, but it turns out to be s fairly bland supper-club type performance. The entire band, except for the guitarist, seems a little too subdued, with the drummer's performance being almost non-existent! 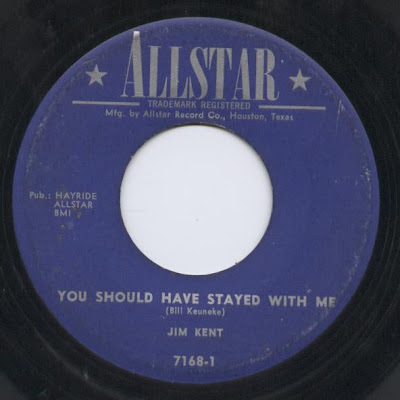 Here's a Fun One! 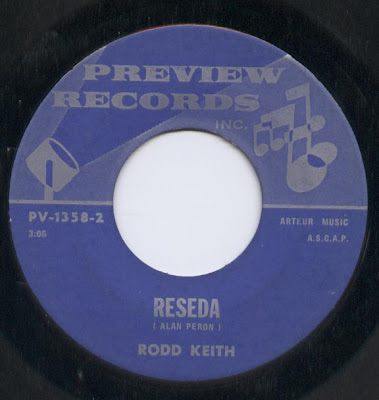 Today we have Rodd Keith, showing off his ability to make a classic mid 1960's pop confection, with a song called "Reseda". At least, that's what I hear bubbling under this kitchen sink production. My perception is that Rodd was having more than a bit of fun with this one, overdoing just about every aspect of it.

The high pitched melody running in the background reminds me a bit of the whistling in "Winchester Cathedral", but tweaked just enough to be even sillier than that song. Then there's the percussion (there aren't really drums, but the beat is being made by something very clattery).

Top all that off with an over-the-top vocal, which I love, but which is completely ridiculous at the same time. I think this one is compilation worthy for sure!

On the flip is a sweet waltz, handled more or less straight, although Rodd's vocal stylings, again, set this apart from what was being released by the "real" labels at the time. There's a spark of something really good on both of these sides, and I think something legit could have been made out of either of these, with a lot of tweaking (for example, no pop song needs to have the phrase "in the interim" as part of its lyric. 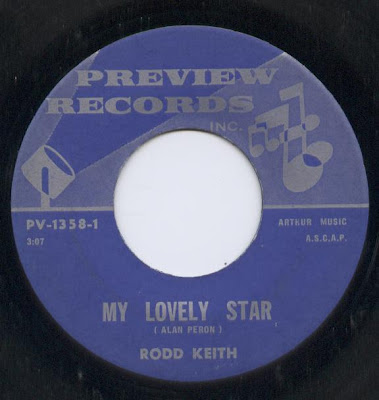