A Collegiate Trip With Gene Marshall 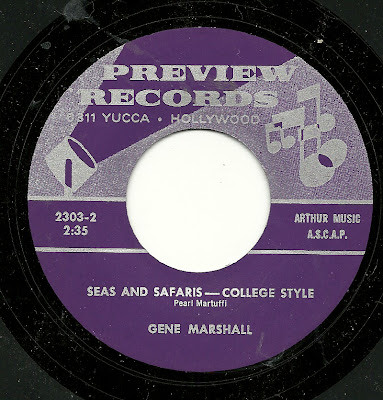 Often when a particularly ridiculous title (or one with a truly unusual turn of phrase) crops up on a song-poem record label, the resulting song turns out to be a disappointment. I've found, though, that this doesn't seem to be the case (in my hearing, at least) for Gene Marshall records with singularly weird titles. Maybe it's something in his consistently measured, sincere reading of whatever was placed in front of him, or maybe the folks at Preview knew how to dole out the right material for the right singer.

Whatever the case, here's another example. What the hell could "Seas and Safaris - College Style" be, I thought to myself. Why, it's a fanciful description of a college semester on a cruise around the world, of course, on the good ship S.S. Universe. On a whim, I did a search, and at the risk of revealing that I'm the last one to know about this, but it turns out that this is a real thing! You can read about it here.

Lyricist Pearl Martuffi dutifully fits in the names of about two dozen ports (and any song that mentions Samoa has had an in with me ever since "The Humpty Dance" did the same), and the Preview folks place the whole thing over a nice, loping MOR track. Best of all is Gene's warm vocal. Bon Voyage!


I cannot work up the same enthusiasm for the turgid flip side, "I Sing to Keep From Crying", although I must say that Gene Marshall again rises to the challenge, and sounds close to tears himself on the opening lines, at the point that he sings of the cause of the heartbreak in the writer's life. 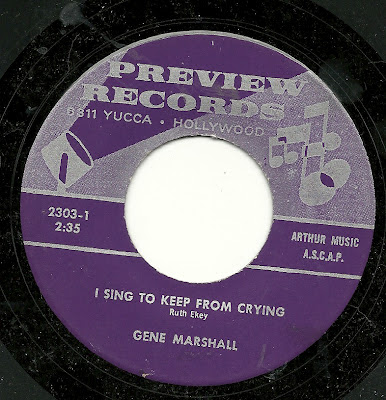 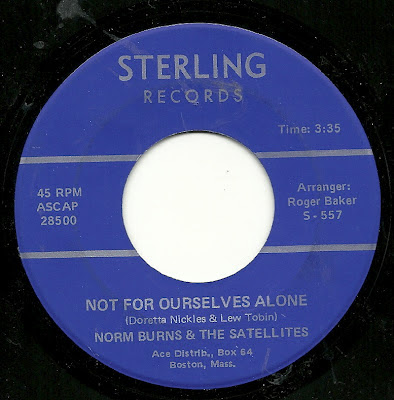 ﻿I think I'll go out tonight for my birthday. Perhaps to that Supper Club in Boston, where the star of the Sterling Label, Norm Burns, plays each Wednesday. What really makes him swell is the way he mixes the standard, smooth supper club sound with a deep social message. The last time I was there, he knocked me out with a meaningful number called "Not For Ourselves Alone". I rushed out and bought a copy. Here 'tis:


I think maybe I'll try and get there a little late. The opening act, Shelly Stuart, is not exactly in the same league as Norm as a singer. She has a bit of trouble staying on pitch and her tone isn't all that great. Plus, the material is less than interesting. She's on the b-side of Norm's song, for some reason, with an endless meandering piece that she sang last time I saw their show, called "The Waltz of Memories". See what you think: 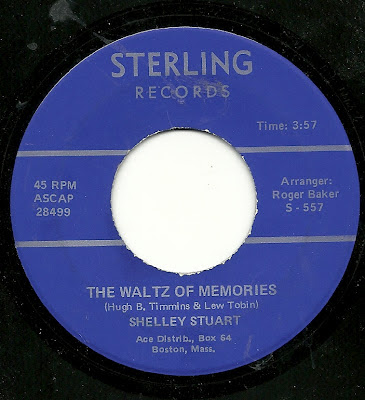 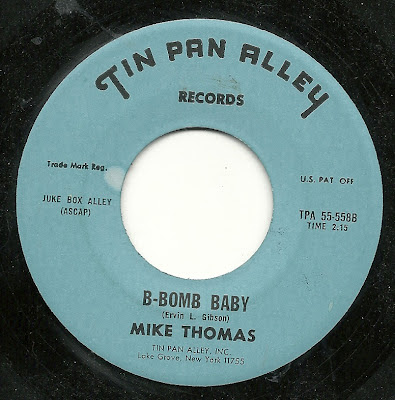 Time is fleeing this week, so I'll just say a few words about this week's record, which comes from Tin Pan Alley's great series of ridiculous stabs at Garage Rock from the late 1960's, many of which featured Mike Thomas. Both of these songs are winners, in a Tin Pan Alley sort of way, but clearly the weirder of the two is "B-Bomb Baby", which shoots for garage authenticity and misses at every turn, most spectacularly during the fractured guitar solo, which has to be heard to be believed. The lyrics are a treat, too!

The flip side, "Airplane Blues", is no slouch either - what with the way every single problem that could go wrong with the airplane does go wrong, one after another. The band (and song) are quite subdued in comparison with "B-Bomb Baby", but there are still some moments to be enjoyed. 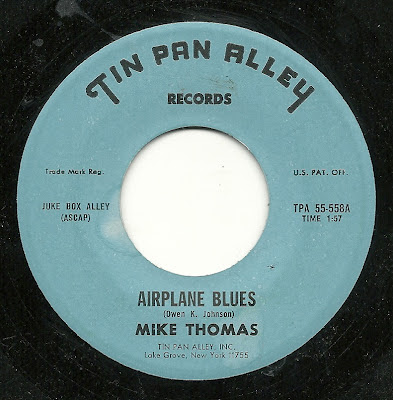 "You Killed Me With Your Tongue..." 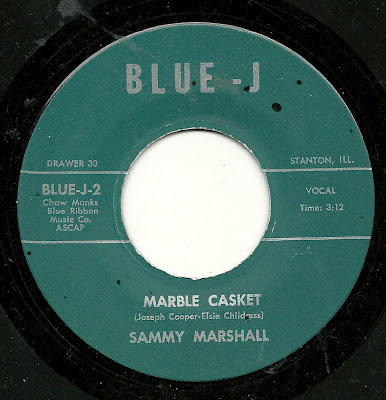 Yep, those are the words - "You killed me with your tongue" - and who better to sing such overwrought lyrics than our own Sammy Marshall, the king of the pained song-poem vocal, the veritable Prince of amateur songwriter heartbreak. And that's just (arguably) the most over the top moment in "Marble Casket". Other moments in the running: "you shoved my bleeding heart", "your scalding tears", and of course the title metaphor. Oh, and there are really only about four chords here - would it have been that hard for the bass player to keep them straight. Apparently so, judging from the segment beginning at about the one minute mark.

"Marble Casket" appeared on the tiny Blue-J label, part of the Globe song-poem factory of labels. This label was perhaps a group effort, as a glance at the songwriting credits on this 45, and the others listed at AS/PMA shows not a single writer (as is often the case for these small labels), but four or five names which turn up in various combinations as the writers on some (but not all) of the songs from the label. One of the writers who shows up on other Blue-J records (but not on this one) is listed here as the publisher of these songs!

Also worth noting, at least for the curiosity factor, is that the label address, listed as a Post Office Box at the AS/PMA site, is technically given as, not "P.O. Box 30", but rather "Drawer 30", in Stanton, Ill (just outside of Champaign). I'm quite certain I've never seen that particular phrase as an address before.

The best things I can say about the flip side, "Please Try", are that it's fairly peppy, and that it's over in the blink of an eye, lasting all of 113 seconds. I didn't start my turntable up slowly, by the way - the opening guitar really does sound like that. 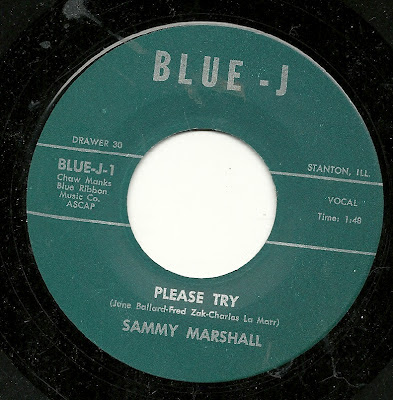