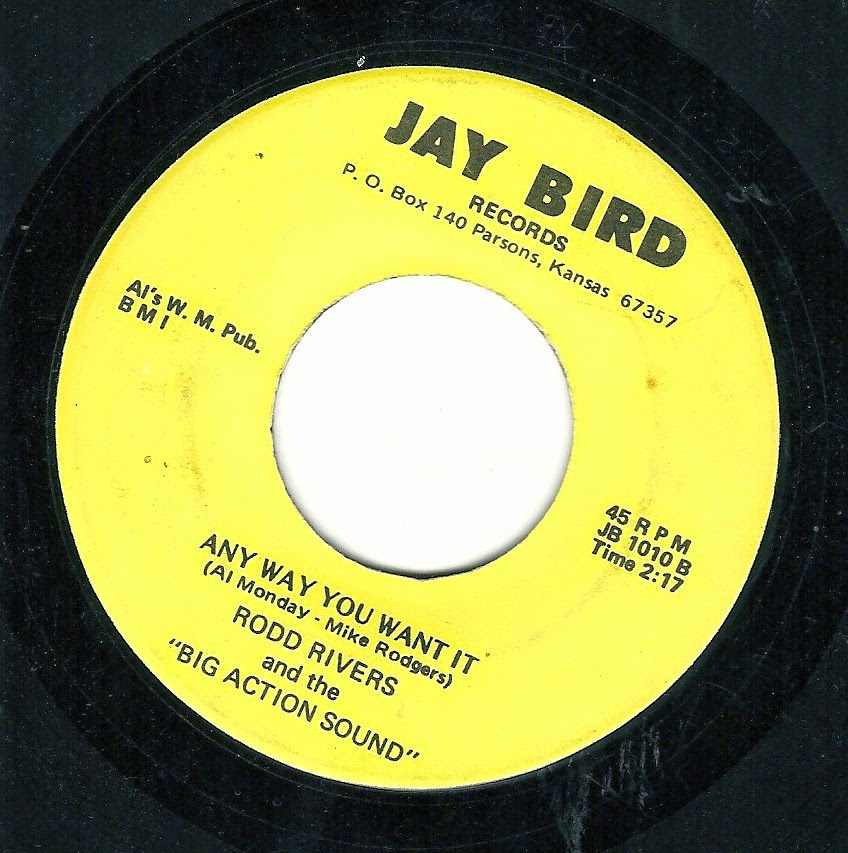 I've always been fairly fascinated with the twists and turns of Rodd Keith's song-poem career, from Film City and its off-shoots to Preview and then MSR. What I'm going to offer up here is pure speculation, as I have absolutely no idea the truth of the matter, but I've noticed that with each change, Rodd changed his billing, from Rod Rogers at Film City to Rodd Keith at Preview and then, after a flurry of releases as Rodd Keith at MSR, back to the slightly different Rodd Rogers for his final releases at that label.

What I wonder is: was this a contractual thing? Was he under contract to Film City, so to get around that, he had to go under a different name at Preview? And did Preview decide it owned the name "Rodd Keith", leading to the slightly changed earlier moniker? And if so, does that explain the further alteration seen on today's feature?

For this record clearly comes from Film City's production studio, based on the Chamberlin and the production sound, and if the stamp on the A-side is to be believed, is from a point in 1971 when Rodd had not been at Film City in quite some time, and was being billed as "Rodd Rogers" over at MSR.  Was he moonlighting at his old stomping grounds, unable to be billed under any of his preferred monikers?

Again, all speculation. If I'm totally off base, I'm sure someone is out there who knows better than I do. Whether you know or not, I'd be interested in other thoughts.

All that said, first up is a superb example of Rodd's abilities as a one man band, on the song "Any Way You Want It (clearly superior to the Journey song of the same title... although.... what isn't...). It comes complete with interactive vocals, Rodd answering Rodd and occasionally harmonizing with himself. All of this is heard over a nifty Chamberlin performance, featuring those soaring faux-choral oohs, an otherworldly sound that I just love. The song itself is no slouch, either - Rodd created a really nice, memorable melody.

Download: Rodd Rivers and the "Big Action Sound" - Any Way You Want It
Play:

On the flip side is the deceptively titled "Sing a Happy Song". A lesser song-poem composer might have ignored the lyric and attached a bouncy, peppy backing track. Rodd's song, on the other hand, is a more contemplative mid-tempo shuffle, appropriate to the lyric, which is about a man trying to overcome his heartbreak, after a romance has ended. Again, we have some nice harmony singing, too! 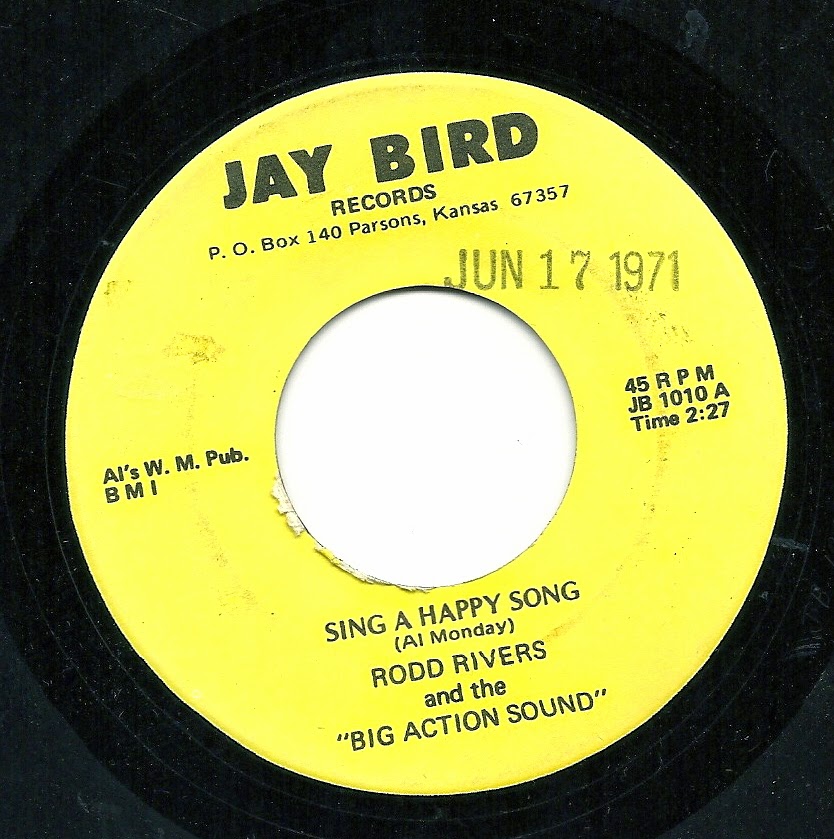 Baby, You Sure Can Palpitate! 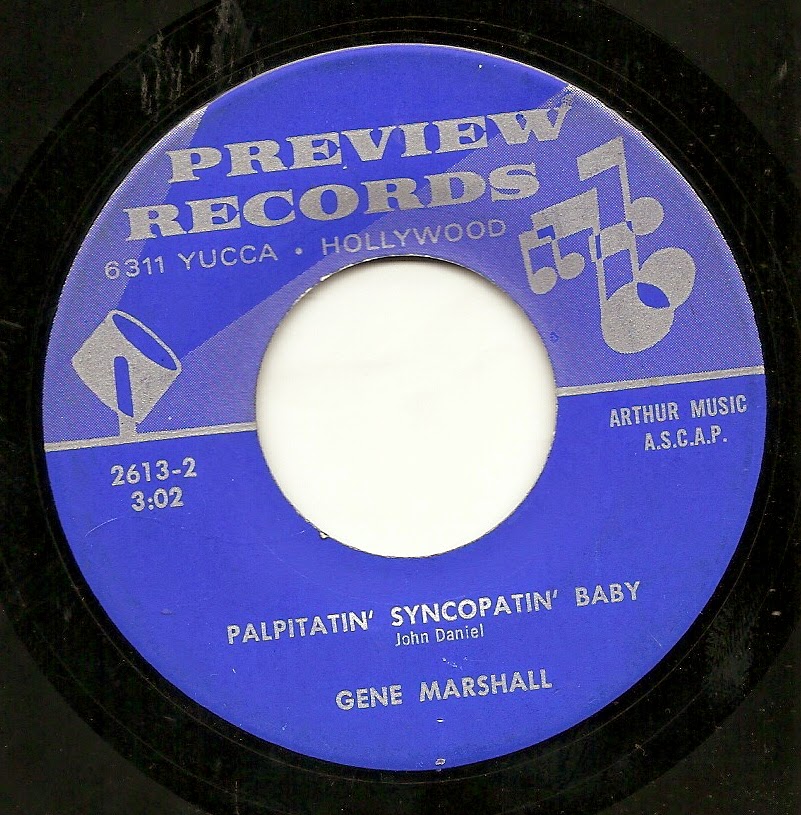 How can one not get at least a little stirred up at the thought of hearing a song-poem titled "Palpitatin' Syncopatin' Baby", sung by Gene Marshall, no less?

The lyrics are suitibly weird ("When I get the beat, I'm always indiscreet; when sex appeals, I kick my heels"), and Gene is certainly up to the task of filling these words with a good measure of feeling, as is the wah-wah guitarist.

On the other hand, the rest of the band seems to be sleepwalking. And whoever decided to pad this record out past three minutes, by adding a 40 second bland solo section, in which the lifeless female backups repeat the title over and over... well, that person was in the wrong job.

Still, the end result is weird enough to make it worth a few spins. I hope you agree:

The flip side is "Love For This Day". With its bland peace and love lyrics, MOR setting and remarkably poor Gene Marshall vocal (missed notes, wavering around the pitch), this one does not strike me as worth a few spins. I do wonder, however, what the writer of this pablum thought when he heard the lyrics that were on the flip side of his creation. 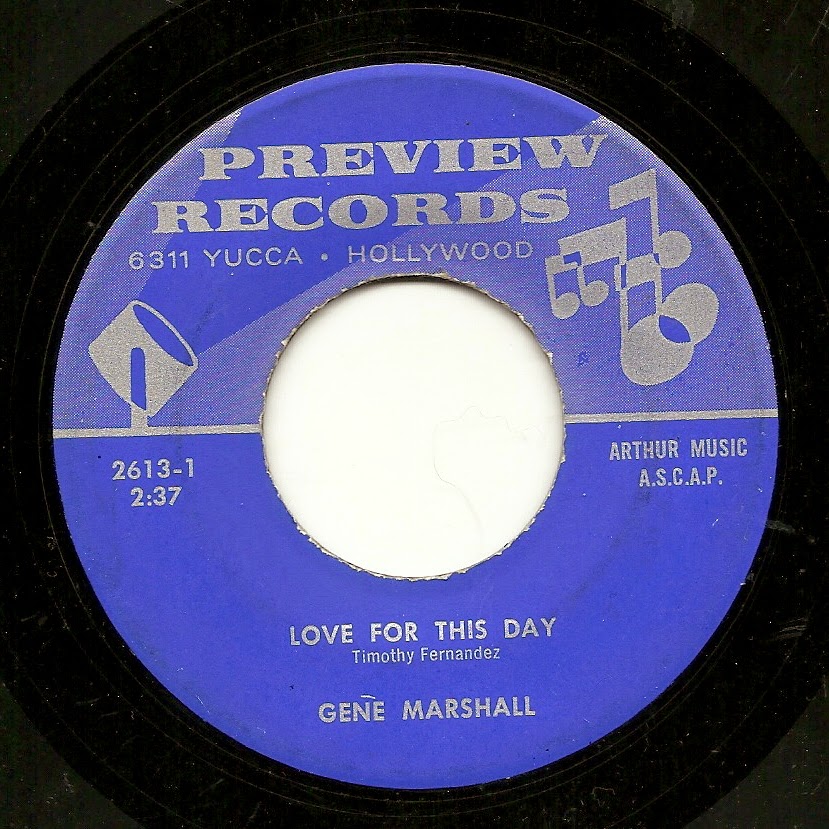 And happy 21st birthday yesterday to my younger daughter, Molly!!! The years have flown by....
Posted by Bob Purse at 11:05 AM 2 comments:

Baby, You're So Fine 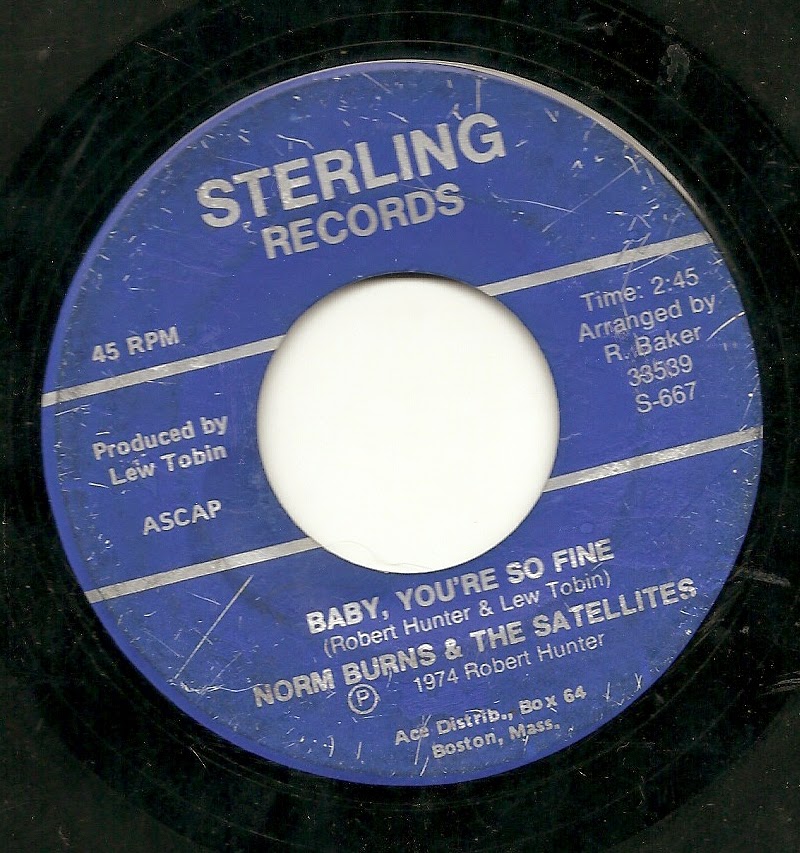 Here's a record label that tells a tale. At the Sterling page at the AS/PMA website, there is only a single Norm Burns record listed later than this one. And that one record comes quite a few discs later, with the billing to Norman Burns, a billing ("Norman") that hadn't been used about seven years, as of 1974. It seems at least possible that that latter listing was actually an earlier recording, held back for some reason.

Either way, this record is likely among the last, and perhaps the very last, that Norm Burns recorded. As I recall the story (and it's been about 15 years, so maybe I'm not recalling it correctly), Norm was diagnosed with a terminal illness in 1974, very late in its progression, and died mere weeks later. This is consistent with the story told by record numbers on the website, where Norm was on virtually every release until, suddenly, he wasn't on any releases.

And he's only on the one side of this record, paired up with a singer (sic) who is otherwise undocumented among the Sterling discography.

The song itself, "Baby, You're So Fine" features a typically strong Norm Burns, with a haunted sounding backing track, featuring some nice bass playing and drums, soulful organ and '60's-ish backing vocalists.

Download: Norm Burns and the Satellites - Baby, You're So Fine
Play:

The flip side of Norm's number, titled "Did I Tell You?" features Rick Wilson with the Five Stars. This is complete speculation, but given that there don't appear to be other Rick Wilson records out there on Sterling, is it possible that they just grabbed whoever was available for the other side of this record? I ask, because I can't imagine anyone thought this guy was a worthy singer - his wispy style and difficulty staying on pitch do not make me wish for a second listen. Then again, one could presume that they chose Norm's eventual replacement, the utterly unworthy Gary Roberts, over this guy, and that wouldn't have been a "sterling" choice, either.

Download: Rick Wilson and the Five Stars - Did I Tell You?
Play: 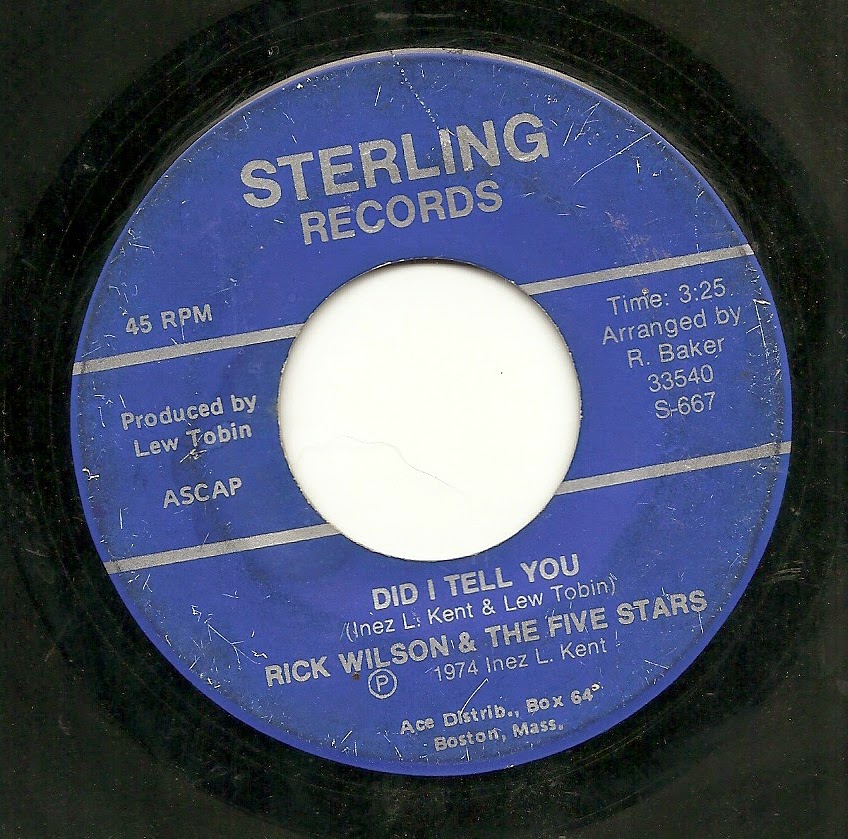 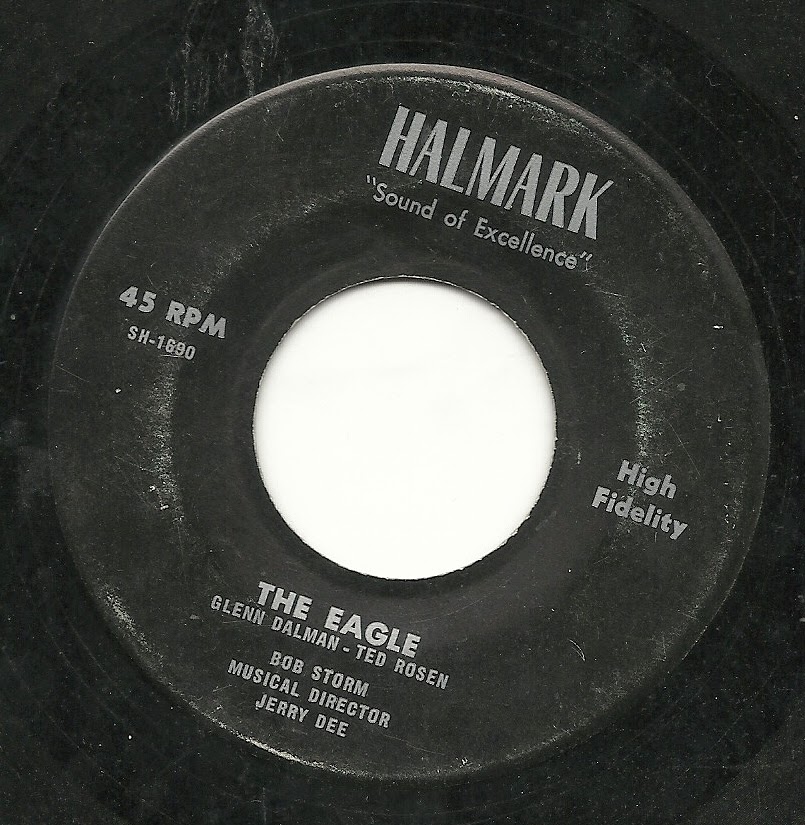 Well, I'm a bit late for Independence Day, but better late than never. Not so much for the fourth of July, which is pretty much tied down by its own name to a particular date. But "better late than never" could have been the slogan for Halmark Records, whose material often sounded about 20-25 years out of date.

And today's feature does concern America, specifically, one song-poet's fears that the shrinking numbers of Eagles might portend the same dire fate for America and Americans. The song is simply titled "The Eagle", and before those eagle-eyed readers - those who salivate at the thought of new Bob Storm ridiculousness to enjoy - notice the billing of Bob Storm on both sides of this record label, be assured that the singer on the a-side sounds (at least to me) very little like ol' Bob, although there are a few moments where I think it's possible - perhaps he had an on-off on that over-the-top unctuousness that is absent here. (The b-side singer is quite clearly not Bob Storm.)

This side has the benefit, rare among Halmark sides, of being barely two minutes long.

Brevity is not among the charms of the nearly four minute long flip side, "The Man from Glory". I doubt that the singer here was known as "Bob" to anyone, as you'll hear. Here we have another person summarizing the New Testament Gospels for us, perhaps in case we were unfamiliar with the story. The turgid backing track and annoying histrionics of the singer make this one nearly unlistenable for me.


Download: Labeled as Bob Storm - The Man From Glory
Play: 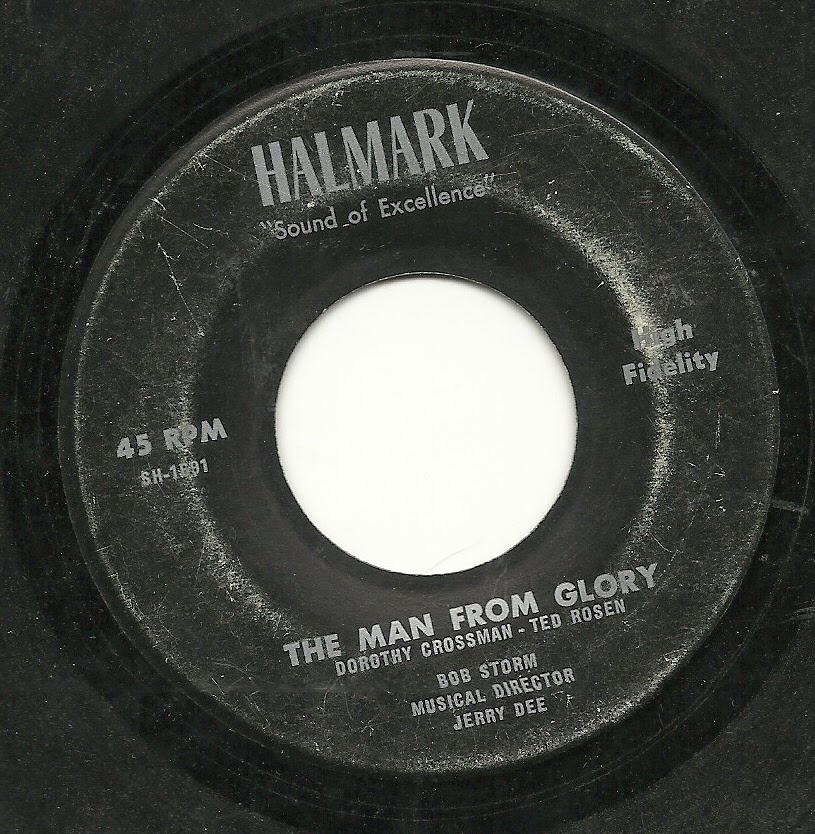