First, I wanted to point out that I got some more historical information relevant to my post from two weeks ago, regarding "The Congo Song". You can read about it here. And now, on with the countdown: 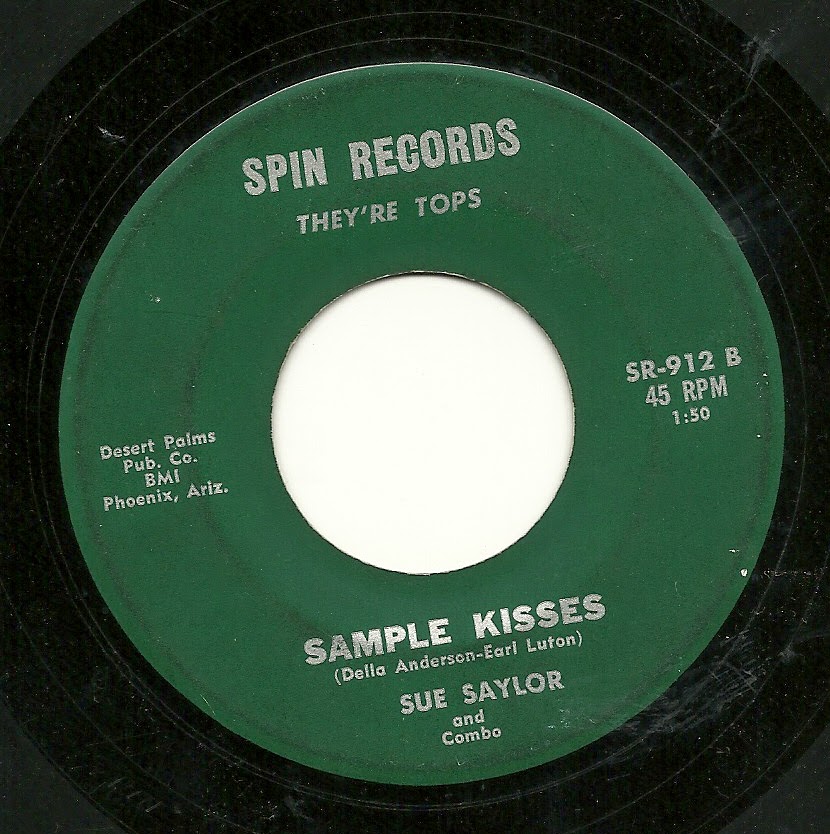 Half or more of the US is under the deep freeze, and then there are those who struggling through ice storms. If you're feeling cold this evening, here's the perfect recipe for getting warmed up - Cara Stewart, under the guise of "Sue Saylor", with a couple of songs co-written by Della Anderson and Earl Luton (the latter of whom at some point started his own "Lutone" label). This one's called "Sample Kisses":

And if you need a little more thawing out, here's the flip side, "Wondering Why". The label says that Spin Records are tops. I say that Cara is tops 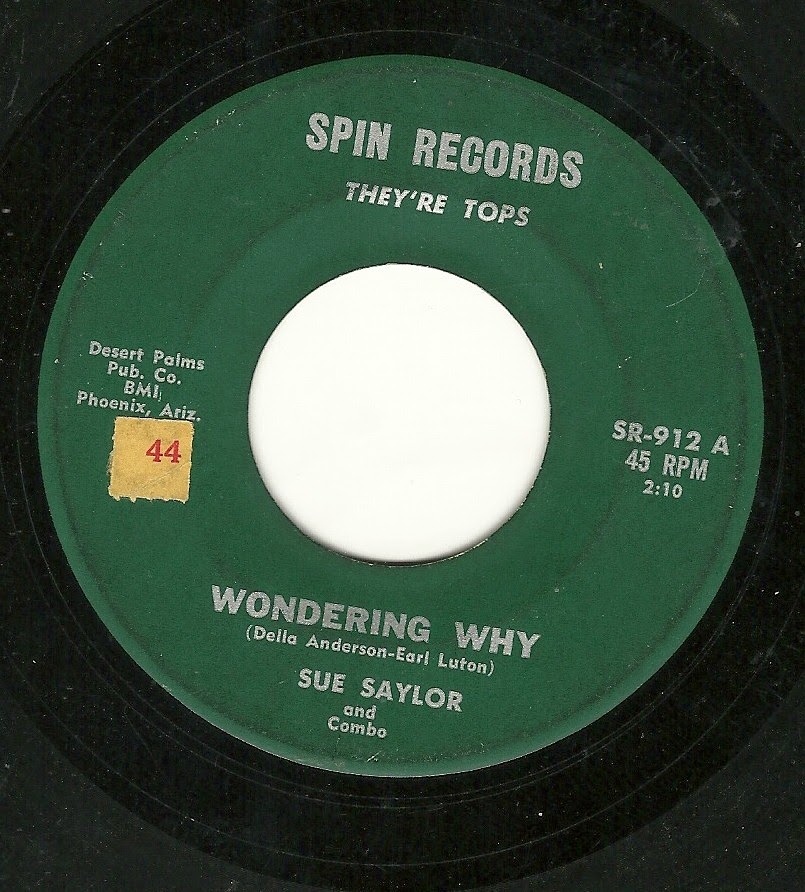 The Simple Solution That Fixes Everything! 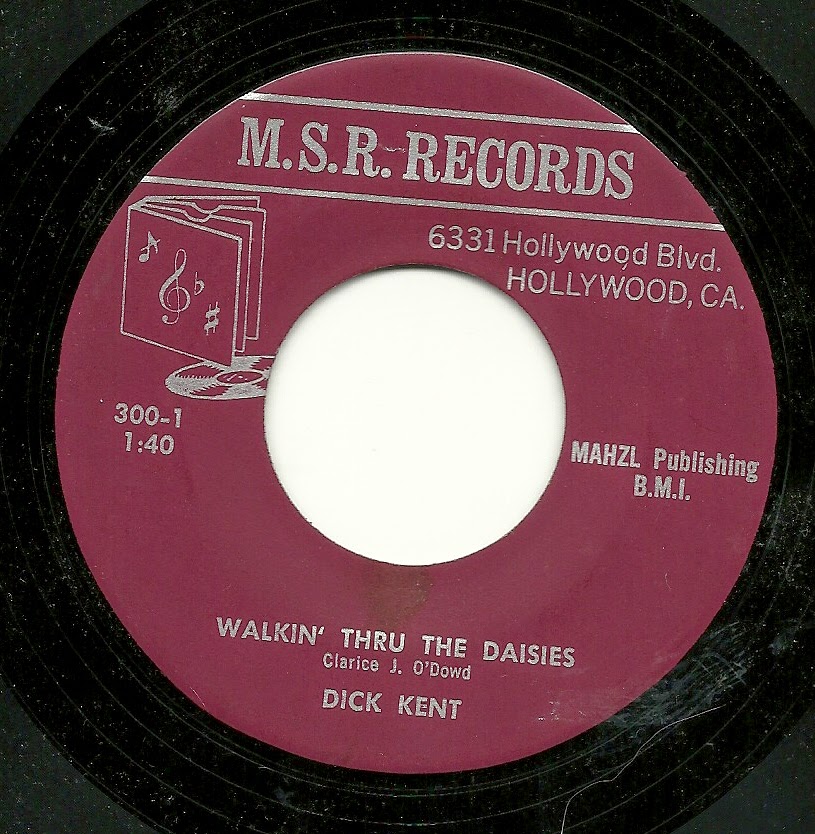 What it is, Bucko?? You say your life's in the dumps, and nothing's gone right in two years? Well, man about town Dick Kent has the solution for you! It doesn't even matter what the problem is: lost job, divorce, terrorism, hemorrhoids, dishpan hands, an oil leak, Fox News, carotid artery issues, running out of Pampers...you name it!!!

The solution is: JUST WALK THROUGH (sorry: THRU) SOME DANG DAISIES!!!!

And it only takes 99 seconds, too!

This record may be the only Dick Kent/Rodd Keith pairing where I actually prefer the Dick Kent side. On the flip side, an unbearably unctuous Rodd sings a fairly turgid weeper about a son who used to be little, isn't any more, and is far, far away. Yes, for those who collect such things, it's a Vietnam song-poem!

Download: Rodd Keith - All I Have Now is a Picture On the Wall
Play: 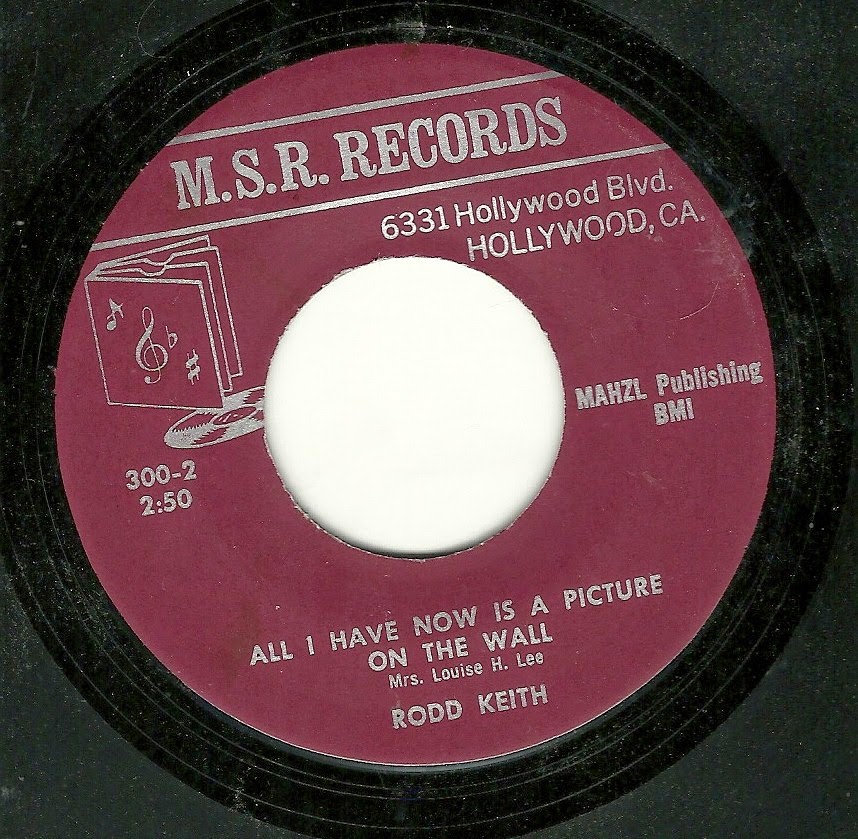 The Caveman and the Congolese 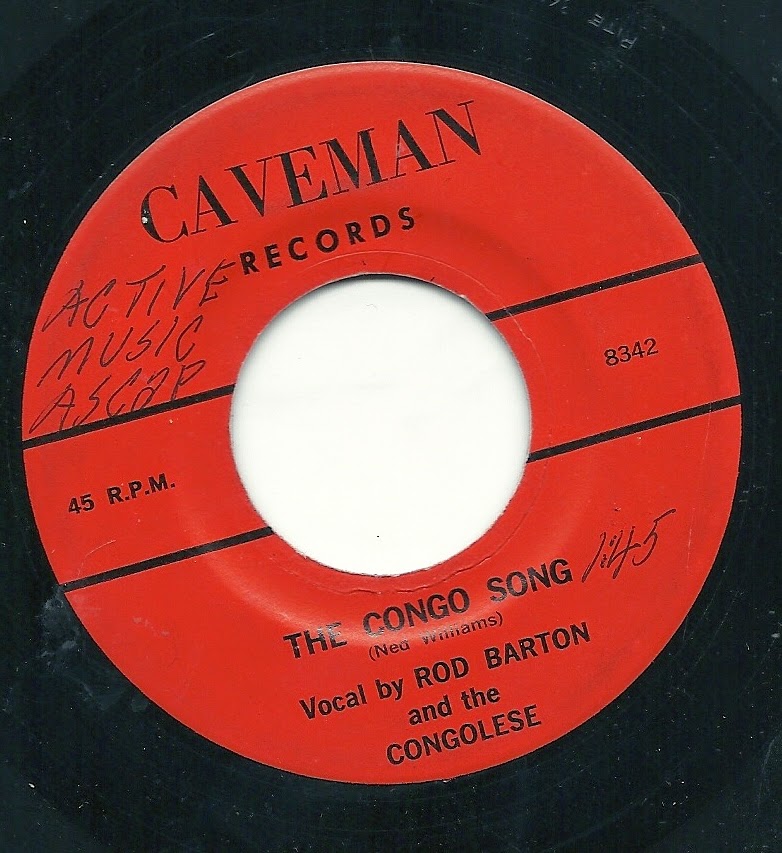 I surely wish I had more records on the Caveman label, or indeed, that there were more records released on the label to be had. Every one of the ones I've heard has been memorable, and today's record is no exception.

This record also features a singer who went by the name of Rod Barton, and a previous posting of a Barton record resulted in one of the high points of my song-poem collecting life - a couple of phone conversations with the man who sang under that name. He looked me up, based on information on this site, and cold-called me. It was great to talk with someone who was there, and his infectious enthusiasm for those days was great, too.

He quite strongly insisted that no one was being taken or scammed on the records he sang on, calling them demos - and a glance at the records he was one doesn't discount that as a possibility: today's record and the other Barton discs in my collection may well be more of the vanity variety than true song-poems. At this distance, it's hard to say.

Barton's song here, sung with a group dubbed "The Congolese", is called "The Congo Song". When I was a kid, the bedroom my brother and I shared featured an enormous piece of wallpaper on one wall which featured an equally immense map of the Earth. It had been put in by the previous owners, from whom our parents bought the home in 1961, so it featured the Belgian Congo.

Somewhere in the back of my mind I remember some of what I learned of the changes that took place in Africa in the 1960's, including the many different places where European colonists were thrown out, including the Congo, but my specific knowledge of the conflicts in this particular nation is sparse, indeed. And a glance at Wikipedia shows that it will take more time than I have now to correct that gap in my knowledge. But it does look like this record probably was written around the time of those conflicts - the late 1950's or just into 1960, most likely (the reference to keeping out commies helps here, too).

All that said, the lyrical conceit taken here is wholly obnoxious and offensive from a 2015 perspective, what with the mock African accent and the references to African sounding names (although perhaps the lyric is referencing actual people - I dunno). If you can get past that, which is a tall order, the track sounds pretty fun, with rockabilly piano, guitar and bass, although oddly, no drums. And Rod Barton was a greatly enjoyable singer, too.

Update, 2/23/15: A correspondent has let me know that the names in the song are real people! Charles Edward Rogers writes:

The names are indeed of real people: Patrice Lumumba, who led the Congo independence movement and was the free country's first president; Mobuto Sese Seko, who took control from Lumumba (accused of being a communist) in a coup; Moise Tshombe, who led the state of Katanga in secession from the independent Congo; and Albert Kalonji, who led another secession in the state of South Kasai.

Download: Rod Barton and the Congolese - The Congo Song
Play:

The flip side is by Jeff Samson and the Western Band and is titled "Weary River". Like "The Congo Song", it was written by Ned Williams, and both sides slide up into the correct speed for some reason, like they were mastered off of another disc that had to be brought up to speed.

This is a pretty standard issue country number, with some nice, closely miked violin, and sweet piano on the bridge. 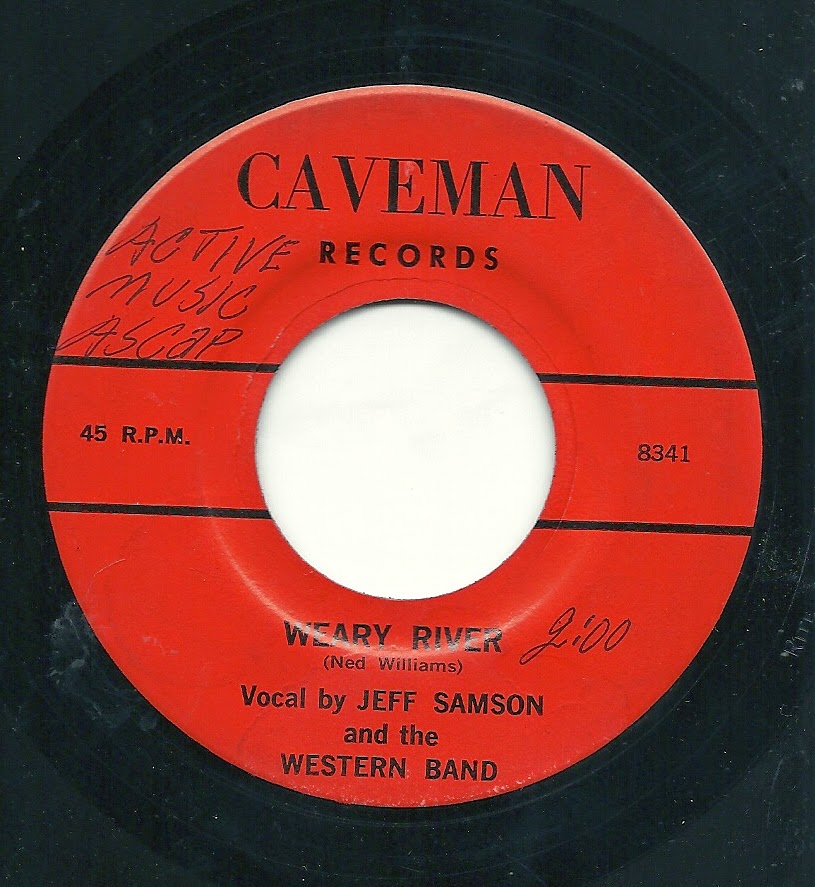 Blamin' It All on the Nights on Hallmark 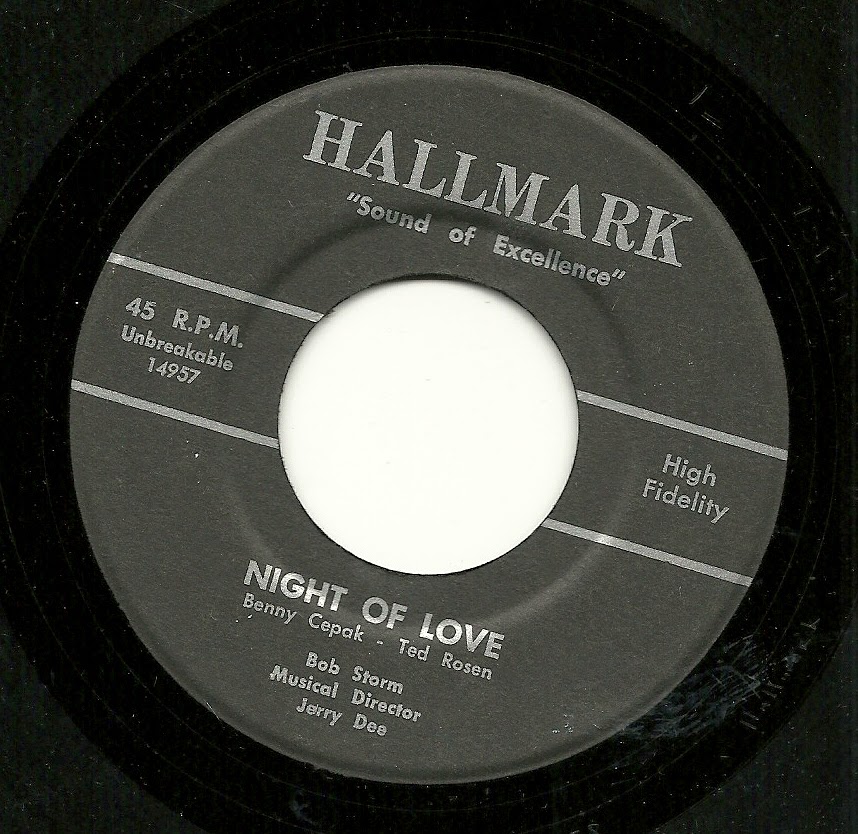 Another round of problems with Divshare has resulted in no posts for nearly two weeks. I'll try to get caught up again with a post by Sunday or Monday, but in the meantime, I'm left on a day when I have no time to spend going on about the wonders of Bob Storm (in a less unctuous mood here) or the Halmark (spelled "Hallmark" here) label. I'll just leave it to you to enjoy two of the more ubiquitous backing tracks in the Halmark stable. First, on the song "Night of Love":


And then on a song titled "Nobody Told Me", one which features eighth grade level lyrics, and one which is not likely to make anyone forget the superior John Lennon single of the same title: 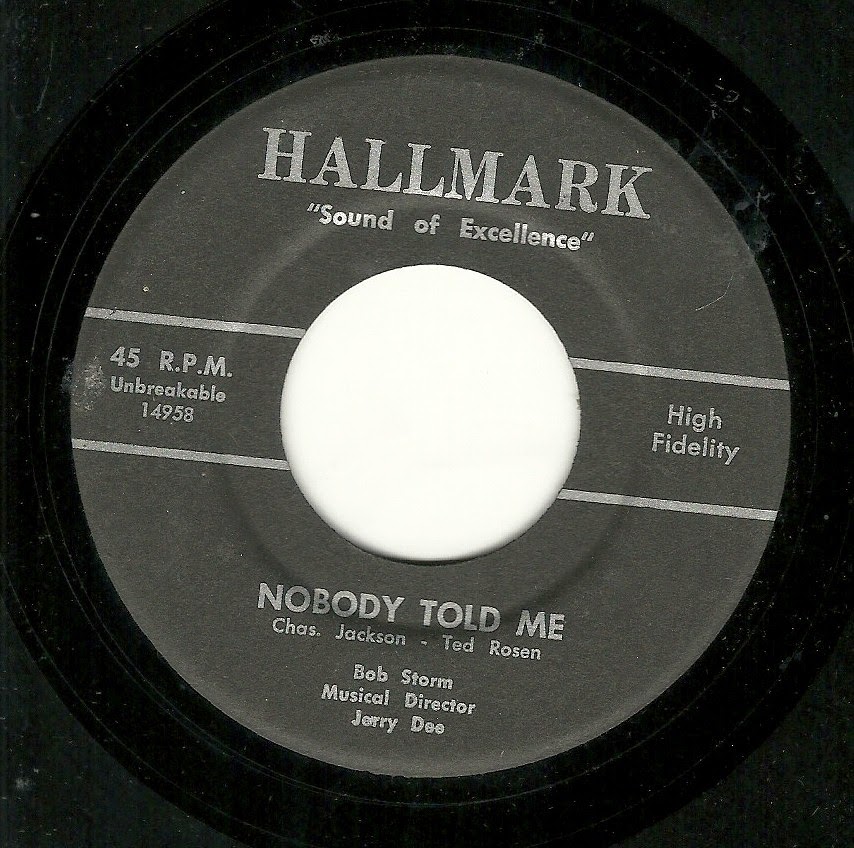