And in the Role of "Fred Hamilton".... RODD KEITH!

Over the past few months, one of my longest standing song-poem pals, who I believe I've been corresponding with for the better part of a decade, has sent me some favorites from his collection. With his permission, I'm going to share a few of these over the next few months, interspersed with many more from my collection. Most of these do not have scans of the labels, but on the other hand, given that they are among his favorites, they are quite excellent and shareable, and I didn't want the lack of label scans to prevent me from letting them be heard here.

Today's example comes from the Preview label, and that charming man-about-Preview, Rodd Keith. For whatever reason, on this side of the record, he is billed as "Fred Hamilton", a name not documented on any other Preview record in the AS/PMA database. Be that as it may, it's certainly Rodd singing, and the fantastic production could hardly have been anyone else.

As heard here, Rodd reminds me of no one so much as late period (i.e. the last two decades) Leonard Cohen. And the otherworldly sounds on this track - the overall wooziness, the plucking guitar, the spacy sounds in the background - this is a keeper which should have been anthologized a long time ago. First rate stuff!

ADDENDUM, 1/30/13: A couple of my closest song-poem pals, including the person who supplied these tracks, have written to say that they don't think this is Rodd singing (see comments). I believe that it is, and have other records of his where his singing sounds much like this, but can see their point that it might be someone else. I'd be interested to hear what others think!


On the flip side is a song credited to "The Downtowners", titled "Among My Memories". That group name usually means Rodd and some of his cohorts, and this is no exception. But this side seems like a missed chance - the chorus at the start is absolutely fabulous, but then he does that damn talky-talk thing that rarely works (on a song-poem or elsewhere). Then nearer the end, they kind of mix up the singing and talking, and that doesn't do it for me, either. Throughout, the backing track holds the promise of what might have been. Obviously, dear listener, your mileage may vary. Here 'tis! 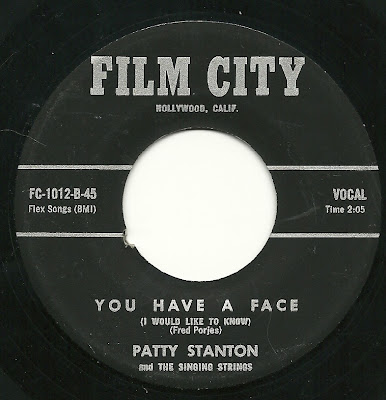 When I first discovered song-poems, among the initial things I did was check out the American Song-Poem Music Archives, which was then (1996) a vibrant, growing database, with new items added virtually every week or more, and not the mothballed site it is now. That allowed me to know what I would like to search for, and after making the rounds of my favorite stores, and buying a few handfuls of the song-poems those stores unwittingly had in their holdings, I contacted Phil Milstein, head honcho of the AS/PMA.

Thus began an ongoing e-mail exchange, and quickly, to a cassette exchange - all of my latest findings, as I continued to collect 45's, for cassettes of the finest as-yet un-comped song-poems from Phil's growing collection, sent to him from all parts of the collecting universe.

The very first tape I received from him was a cornucopia of fantastic material, starting with a double shot of Halmark ("My Hamburger Baby" and "My Daddy, He Died in 1969") and continuing through the labels and styles. I tell you all this because just last week, some 15 years after that cassette exchange, I managed to snag a vinyl copy of one of my favorite songs from that initial tape exchange, a marvelous little piece of Film City weirdness with the unwieldy title of "You Have a Face (I Would Like to Know)".

On this otherworldly sounding record, the Chamberlin (played almost undoubtedly by Rodd Keith) sets a smoky, night-club-esque mood, with one of the greatest sounds known to man, the marimba, front and center at times, as Patty Stanton sings in a "come-hither" style and lets the listener know how well she'd like to know the face to which she is singing. If the words chosen are a little less than masterful, well, that's one of the charms of the song-poem world in general, and this record specifically.

The oddest thing about this record may be that both sides contain versions of the same song, with the flip side (actually identified as the a-side, despite being by far the weaker of the two renditions) being offered without its parenthetical title, and performed in a rather bland, blase manner by label head Sandy Stanton. This really plays up how important arrangement and vocal performance are to a song, as this is essentially the same material, but it holds almost no interest, lacking that wonderful smoky arrangement and that sexy performance from the flip side. Here's Sandy Stanton with "You Have a Face": 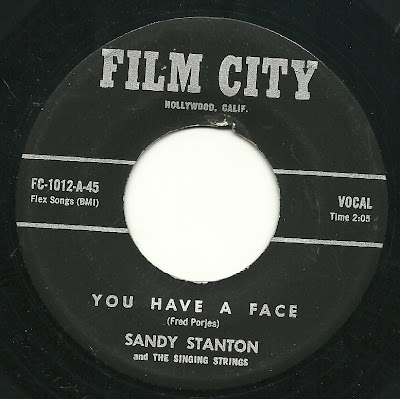 Dinner at the United Nations 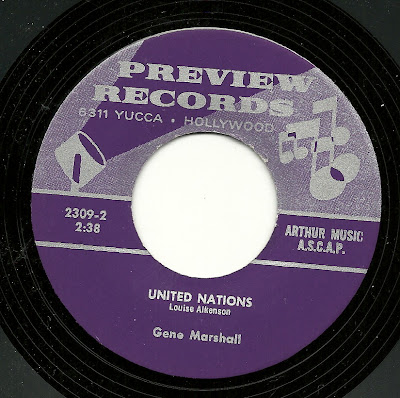 It seems like quite a while since Gene Marshall was featured here, and it's time to rectify that. The lyrics to today's song, "United Nations", are a minefield of weirdness, to my ears, anyway. Essentially, the songwriter went to a dinner where there were people of every shade, continent, religion, ethnicity, etc. On the one hand, it sounds like she intended to share how impressed and deeply moved she was to be at this cultural gumbo of a dinner party, and how wonderful the family of man is, and maybe that's how it really was.

But I keep getting stopped short by her choice of words: she was "so shocked to see" this group, and how they were all "sitting comfortably", while they were all "staring at me". Does this sound to anyone else like the description of someone who is observing the natives, like a sociologist, or even an anthropologist. The lyrics from there on really do sell the point of interacting with those different than ourselves, but that first verse just has the feel of the society lady having an exotic day out with the natives.

The flip side, "Jumbo Dreams", is weird in its own way, starting with that momentary disco guitar noise that leads it off. Am I hearing this right: that the writer's "Jumbo" plans and dreams of the title, are nothing more or less than the day when women would be throwing themselves at him? That's what I'm hearing - he doesn't even explain how those dreams came true. And has anyone ever actually spoken of having "Jumbo Dreams"? 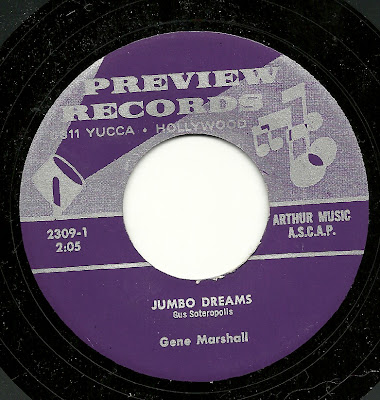 A Little Bell Told Me 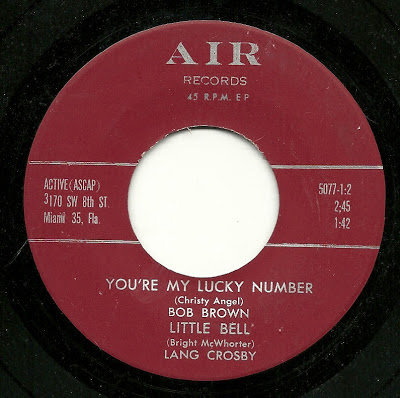 Today's EP is one that I snapped up recently, extremely happy and excited to have been able to buy a copy of a record containing one of the singularly greatest song-poems I've ever heard, one which will likely be familiar to most people reading this post. And while it's still the best reason to have bought the record, I am also extremely glad to have made the acquaintence of a song heard on the flip side of the same EP, one with a bit of mystery to it, as well.

The Air label seems to have been a catch-all label. I have very little understanding of how this worked, but records on Air can contain the product of as many different song-poem factories as their are tracks on the record. I have no idea if whoever was behind "Air" made any recordings at all. In this case, we have two songs from the Lee Hudson production facility, one from Globe and one that I'm guessing came from Tin Pan Alley.


And now we come to the song which led to this posting, one that sort of fascinates me. It's called "Little Bell", and it's credited to Lang Crosby. First of all, this recording features the melding of two of my passions, Calypso and song poems, so it's already got that going for it. Secondly, there is the mystery here. "Lang Crosby" does not appear anywhere else in the song-poem database at AS/PMA, and what's more, searching for him online shows that his name is the same as 2/3rds of that of one of Bing Crosby's songs, Philip Lang Crosby. Probably a coincidence, or perhaps a ruse to make the song-poet think that the song was being sung by someone who was sort of famous? Who knows. Finally, which song poem factory produced this number? My guess is late 1950's Tin Pan Alley, based on the sound, but I'm not at all sure.

Regardless of all of that, this has been my favorite new song-poem discovery for the last month or more, with the lilting beat, intoxicating, echoey production, sweet vocal and first-rate lyrics. I hope you like it at least half as much. Here's "Little Bell", by Lang Crosby:


In many ways, the next track, by Sammy Marshall, or in this case, Sonny Marshall, is the typical Sammy release from the people at Globe, but the one fascinating aspect to it is its title, and by extension, its lyrics. It's called "Ben Sira in the Garden", and doing a websearch for "Ben Sira" took me down a rabbit hole of information about an ancient Jewish text, left out of the Bible, but still considered very important to many people of varying religious inclinations. I'll not go into any more detail, to keep readers from seeing how very little I know about this, but there is more in this title and lyric than in your everyday song-poem, that's for sure. Here it is:


And finally, the song which led me to pursue this record in the first place. This one is already ensconsed at the top of the song-poem heap, having been included in one of the great compilations of many years ago. But there's never a bad moment to experience Cara Stewart's classic "Song of the Burmese Land": 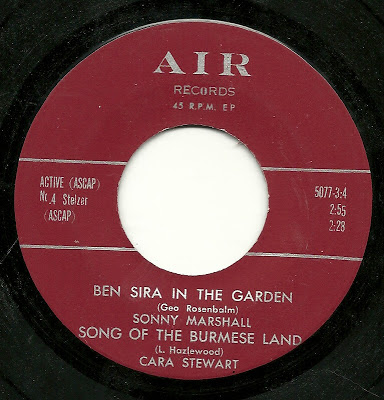