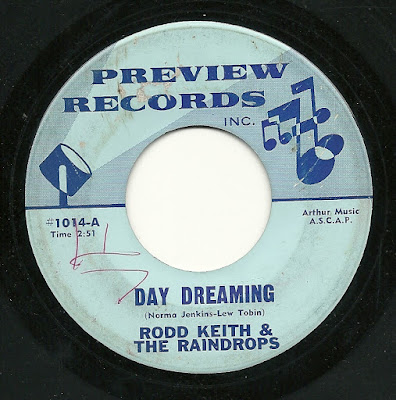 After I first heard this record a few weeks ago, I thought to myself, "well, that'd be great for the site, but I'm sure a record this good has already been online somewhere", thinking of the various files that used to be at the AS/PMA website and have since been hosted at WFMU.

When the first search turned up nothing, I searched again. And again.

So, I'm now convinced that this absolutely lovely little treat, "Day Dreaming" by Rodd Keith and the Raindrops has not been widely dispersed to the song-poem faithful. And it's time that that changed.

I love this record! Rodd fills the verses with the sort of '60's pop that gets a bad name, with the piano triplets and cheery unison singing, which I typically am indifferent to, but which I can really enjoy, when done right, as it is here. And then he adds a soulful keyboard solo halfway through to increase the likability of the track.

Finally, there's that bridge. It comes in twice, and what's that I hear? Is that Blue Beat flavoring? Would Rodd have known about Blue Beat? There's no way the bridge would have sounded like this if he didn't. Just another surprise from Rodd Keith's gigantic bag of musical tricks!

On the flip side, we have The Raindrops, for some reason billed without Rodd Keith, who is clearly singing here just as on "Day Dreaming". While I appreciate the close harmonies Rodd designed here, particularly that final sixth chord at the end, the song is performed in a style that does extremely little for me, and Rodd uses his smarmiest, most ingratiating vocal style here, a style which I rarely find interesting, unless the song/performance sink into self parody, which doesn't happen here. 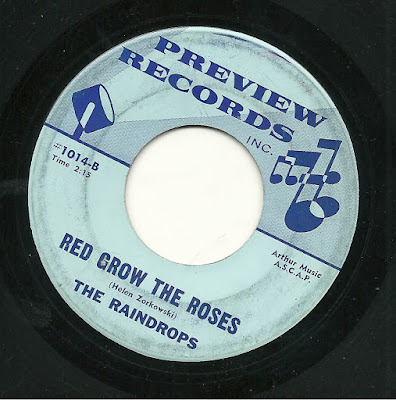 Email ThisBlogThis!Share to TwitterShare to FacebookShare to Pinterest
Labels: Preview, Rodd Keith, Song Poem of the Week, The Raindrops 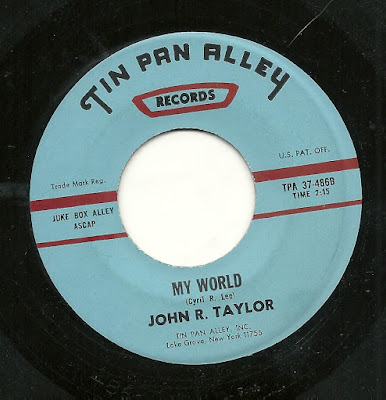 For much of their last two decades at the forefront of the song-poem world, Tin Pan Alley seems to go through a variety of wispy, wimpy-voiced vocalists interspersed with backing musicians who didn't seem to know what they were doing.
So it was a pleasure, and yet also frustrating to find this outlier, a record performed by the otherwise completely unknown John R. Taylor. Aside from the resolutely awful vinyl pressing, I genuinely like this record - the band is cooking, especially a hyperactive drummer and very involved lead guitarist. And John R. Taylor is a bit over-the-top, but not in a Bob Storm way - just an intense, all-in performance of a lyric which benefits from such a reading.
While it's a far cry from great, ﻿I actually believe this singer singing these words (well, aside from the disconnect between the very adult singer singing about "another boy". I truly wish he'd recorded more material for Tin Pan Alley, and hope he's not the same John Taylor who went on to help form Duran Duran.
Download: John R. Taylor - My World
Play:
The flip side is "When the Day Kissed the Night", and it shows to me that even a singer of this style who sounds good singing forceful, upbeat material will start resembling the unctuousness of a Bob Storm when handed ballad material, although in Taylor's case, he just sounds a little pretentious, rather than ridiculous. I don't find any aspect of this record appealing.
Download: John R. Taylor - When the Day Kissed the Night
Play: 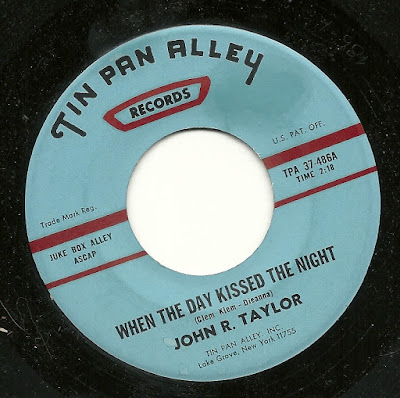 Unusual Reasons to Leave This Town 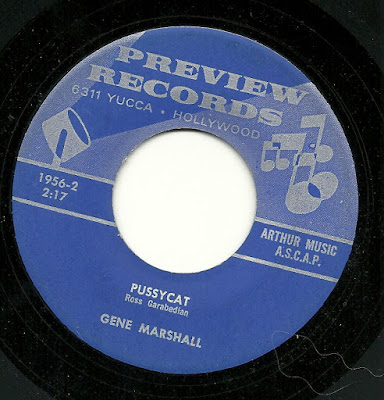 Sometimes, I feel like saying too much - or much of anything - will ruin and pleasure and surprise of listening to a song-poem which has pleasures too good to spoil. So it is with "Pussycat", by Gene Marshall. Aside from the reference in the name of this post, I'm just going to let you enjoy it as the song unfolds on your computer. I highly doubt that you'll be disappointed.

The flip side, "Now I Lay Me Down" seems to be about a soldier in Vietnam wishing he was back home. That's a good topic, and I wish I could drum up some enthusiasm for it, but I find the product that the folks at Preview came up with deadly dull. You?

Download: Gene Marshall - Now I Lay Me Down
Play: 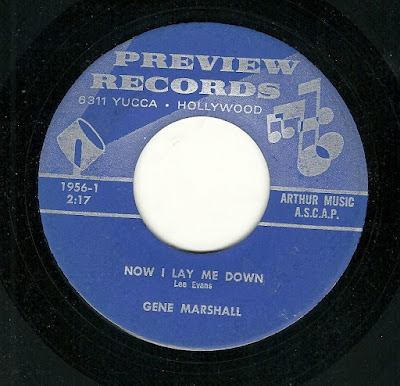