Well, I haven't been posting much, what with a quadrennial visit from the accreditors, and the unexpected need to replace my car as quickly as possible. Hasn't left much time to do a lot of other things. And there still isn't a lot of time now, so although I'd hoped to respond to a couple of questions today, that will have to wait until next time.

As a reward for your patience, I'm going to offer up a full song-poem album, one that is so new-to-me that I haven't actually had a chance to listen to it yet - in fact, if there are glitches here, please let me know, because I literally didn't have the time to listen to this while the file was being created, or to the file, once it was done.

I bought this album despite the facts that I 1.) have almost no patience for the output of the Columbine label, and 2.) very rarely find anything to enjoy in the work of Kay Weaver, who dominates this album. And the reason I did, as soon as I saw it on eBay, was the presence of the song title you see up there at the top of this post, "Yours Cruelly, Mrs. Suds". I HAD to hear what that was.

And so, here is it. It does not disappoint.The lyrics do not contain the title phrase, and are instead concerned with the narrator of the lyrics seeking a "1-1-8". My friend Stu found a reference to this phrase meaning "drunk", and that could certainly be the meaning here, judging from the remainder of the lyrics. Lee Scott, in her only vocal on the album, gives a full bodied reading of those lyrics. And oh, those lyrics. Someone is having an issue with alcohol, and it doesn't sound like the rest of his life (the lyricist is male) is going that well either. I'll let you experience the joys of this song for yourself - it's certainly one of the more esoteric song-poems I've heard in recent months. Or years. And that may well be my favorite song-poem title phrase ever.

And now, for your edification and enjoyment, the entire album. "The Now Sounds of Today" (which is the name of virtually every Columbine album), edition CRH - 81: 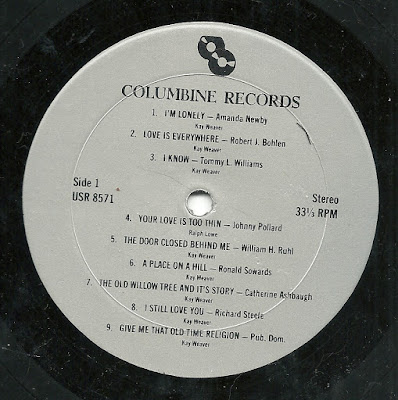 Again, I have not listened to these, so you all are actually going to get the chance to enjoy this collection before I do. As was often the case, the good (?) folks at Columbine included two public domain songs that nearly everyone would know, in order to make this look like a legitimate release. Kay Weaver handles 16 of the 18 tracks, with Ralph Lowe and the aforementioned Lee Scott each handling one. Enjoy!

Download: Columbine Records: The Now Sounds of Today (CRH-81), Side One
Play: 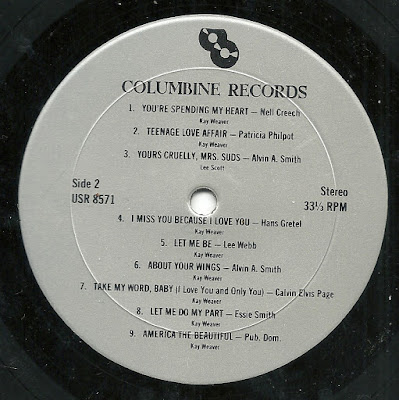 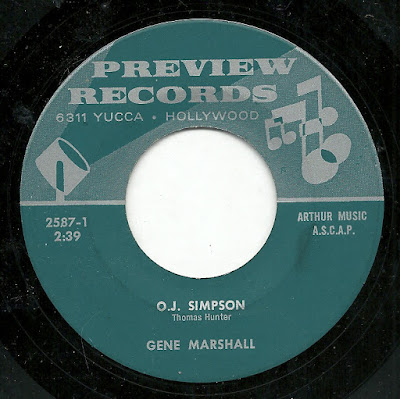 Hot off the mailman's truck, and to your ears this week, is a record I was lucky enough to obtain just this week, and for a bargain of a price, given its contents.

What we have here is a tribute worthy of a hero, to that then-hero of the gridiron, O. J. Simpson. And who gets to do the honor but the voice of the label, circa 1973-74 (when this record dates from), Gene Marshall. Writer Thomas Hunter doesn't actually have a lot to say about O.J. - if someone didn't know who the man was, or what he did for a living, nothing in this lyric would give even so much as a clue. The backing track is suitably funky, and the Preview arrangers do a good job of extending a fairly short lyric into a standard 2 1/2 minute pop song.

And of course, the lyricist was 100% correct that (in a very musical phrase indeed) "his popularity is never going down". Of course that's the case - have you seen him on those Naked Gun movies? The guy is a stitch.


The flip side presents a few fascinating areas of inquiry. It's a peppy record, with a sinewy melody and understated backing.

Here's what fascinates me: It features a vocal performance credited to "Dean Curtis", who's shows up on well under a dozen known Preview 45's. Maybe I'm projecting more onto this than is there, but the lyrics, in which the writer "thought

But I have a suspicion that this might actually be Rodd Keith. It's not clear to me if Keith was even at Preview by this point (the records with his name on them cease about 200 label numbers earlier. But boy, that vocal is full of things that sound like his inflections, and has the understated sound of some of the records he made for MSR near the end of his life. And the Dean Curtis records dry up by the time that Rodd died.

Or maybe it's more simple - maybe Rodd, having moved on to MSR, had to appear under a different pseudonym - I have no idea how any of that works.

Or maybe it's not Rodd, but just a guy named Dean Curtis, I'm wrong about the Black angle, and there was no effort to deceive anyone, for any reason. What the hell do I know?

Download: Dean Curtis - I Can't Get No Sweet Lovin'
Play: 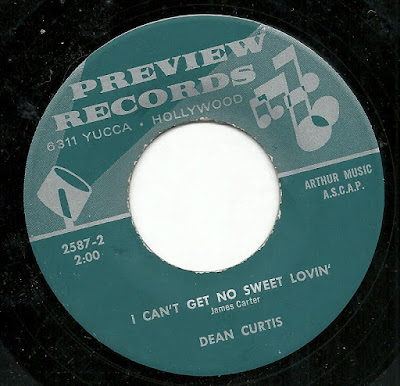 An Anti-Vietnam Song-Poem - On Halmark, of All Places

I tend to avoid featuring Halmark too often, usually only going to that well when I find something truly interesting in one way or another. There material is just too dreary and samey to feature more than a few times a year.

This is one of those times. I've certainly found, over the years, that when song-poets delved into political or social issues, the vast majority of them landed on the conservative side of things - conservative religious themes, anti-drug, pro-flag, gung ho for the military and, when it was a going concern, the war in Vietnam, to name a few examples. There are certainly exceptions, as the entire albums of material praising Jimmy Carter demonstrate, but those are in the minority by a wide percentage. And if anything, those who sent their lyrics to Halmark were on the far end of the spectrum, particularly when it came to religion.

So it was a bit of a stunner to come across a song-poem taking the first person point of view against the war in Vietnam at all, let alone on Halmark. It's the last song on the EP, so let's struggle through the other three first, shall we? 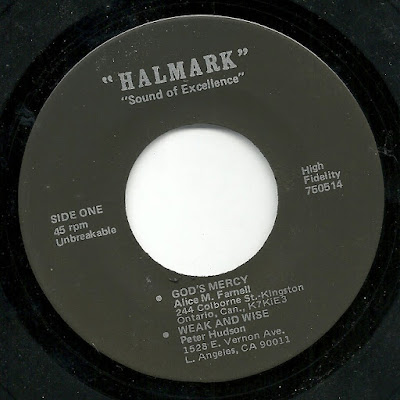 At not coincidentally, we're religion heavy on much of the remainder of the disc. Starting off with a charming, not at all stultifying ditty all about "God's Mercy":

The singer there is most certainly label stalwart Jack Kim, and on the next record, which, if it can believed, is even more boring, Jack is joined by his wife Mary, as he so often was. The way Halmark had them each echo what the other had just sung drives me right up the wall. Please enjoy "Weak and Wise". I insist:

At least those two songs were relatively brief - the A side times out at barely five minutes. The b-side's two song time out at well over seven minutes total. If learning about "God's Mercy" wasn't enough, now Jack and Mary will tell you all about "The Word of God", over one of Halmark's most particularly ponderous backing tracks.

And finally, the track which makes the sharing of this record worthwhile. It's a story called "A Criminal in My Country", the saga of a young man who planned to be a teacher, but absconded to Canada to avoid serving in an unjust, immoral war, and now finds himself trapped there, despite the war having ended (although before too much longer, thanks to the aforementioned Jimmy Carter, he would have been able to return home).

At first, I just noticed the address listing for the song-poet, which as you can, is indeed from someone living in Canada at the time this lyric was submitted to Halmark, and I momentarily thought it was a first-person story. But no, the writer's name is that of a woman, and a quick web search finds there is still such a person living in Alberta to this day. Perhaps this is fiction, or perhaps she was telling the story of a loved one.

Anyway, this is no better, musically, than the other three numbers here, and a talking section in the middle, as heard here, is almost always a drag, to say nothing of the nearly four minute length. But the very existence of this record fascinates me.

Download: Halmark Production: A Criminal in My Country
Play: 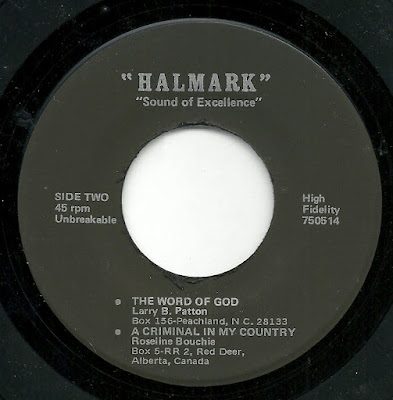