Halmark Records Meet the Actual Sounds of the 70's!

Howdy,
I apologize for the lack of posting this month. It's been tremendously busy, as I've been preparing for a big event I'm part of, had a bit of computer problems, and put everything on hold in order to take the once-in-a-lifetime chance to meet one of my heroes (more on that in a future post).
This will be a bare-bones post - the old-time ads will return next week. But I heard the following record for the first time last week, and something about it really caught my ear, and I wanted to share it: ﻿ 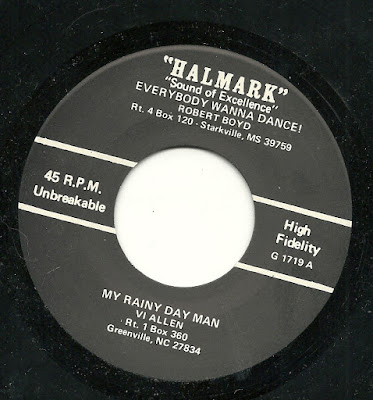 What caught my ear was the first track, "Everybody Wanna Dance!". ﻿This submission seems to have forced Halmark into the 1970's. Because none of their tired, MOR flavored, or Muzak flavored backing tracks would have fit this lyric at all - it's quite a different lyric than the flowery, sometimes thoughtful, sometimes ridiculously overblown lyrics they usually got. Even the word "Wanna" seems quite a ways out of their typical audience's wheelhouse. And those lyrics: It's about dancing to the latest beats. Click on the Halmark link (or just listen to the other three tracks here) if you want to hear what they usually produced.
No, for this one, they had to actually find someone who could come in and create a backing track that sounded moderately like 1974, complete with a chugging drumbeat, synth effects, guitar parts and live backing vocals. If it weren't for actually seeing the label, I'd have never thought this was a Halmark release. Have a listen!:
Download: Halmark Productions: Everybody Wanna Dance!
Play:
And that uses up just about all my time. I'll let you discover the joys of the remaining three flaccid numbers on this EP for yourself. Here they are:
Download: Halmark Productions: My Rainy Day Man
Play:
Download: Halmark Productions: Under the Stars
Play:
Download: Halmark Productions: Open Your Eyes
Play: 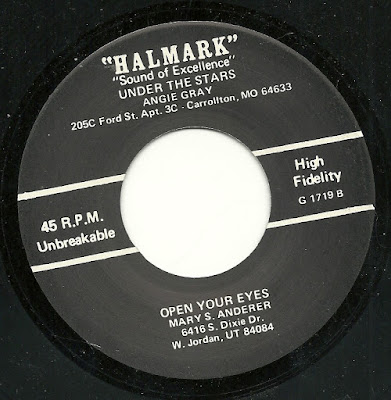 The first is a direct, no frills suggestion from a company in New York. It comes from a 1921 edition of Film Fun Magazine:

Then there is this intriguing ad from a 1960 edition of Modern Screen, which, as Pete says, seems to suggest cutting out the middle man entirely - it's a product of some sort which will help you write the music for your poems, too, from a company in Boston: 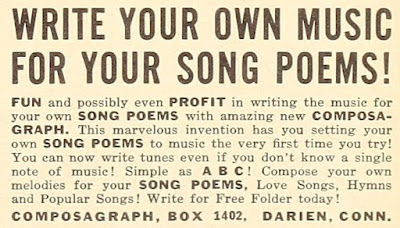 Moving on to today's record feature.... 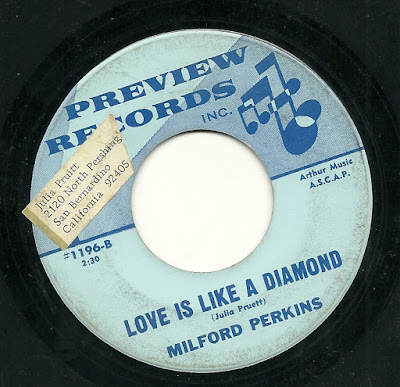 Today, we're going to hear from the great Milford Perkins. I'm not sure I've ever featured a record released under the name of Milford Perkins before, but if I did, I didn't put his name in the labels for the post. And I'm not doing so here, either, because Milford Perkins was one of the more common pseudonyms for Rodd Keith. In my experience, many of the records released under this name have a country tinge, which probably explains the country-singer-style name he chose for those releases, but that's not what this record is.

Instead, what we have here is a top-notch pop-rock side, titled "Love Is Like a Diamond", which features an indelible melody, a warm, inviting vocal from Rodd, and, best of all to my ears, some fantastic drumming - seriously, the fills on this record are otherworldly, as they are on many Preview records - I'd love to know who this drummer was. All around, an excellent record.

I have far less to say about the flip side, "Come Back Into My Arms Again". Everyone's doing their job, but nothing about this side is particularly inspired, or even interesting. I do like the fact that the good folks at Preview claimed the song was a full minute longer than it actually is, on the label. 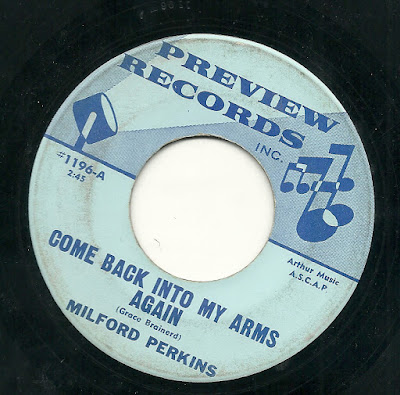 First, I want to make sure I mention that I've updated last week's post. I had inadvertently linked to versions of the tracks which were running fast (maybe at 50 RPM instead of 45). Two days ago, I replaced those with corrected tracks, so if you have the old versions, you can go back and download/hear the corrected versions.
Second, here are still more ads from 1922, via the magazine "Film Fun", and courtesy of Pete. There's a "wonderful proposition" in these ads - I wonder how many people took him up on it.

"Reaper Block" was an office building on Washington Street, in the heart of downtown Chicago. 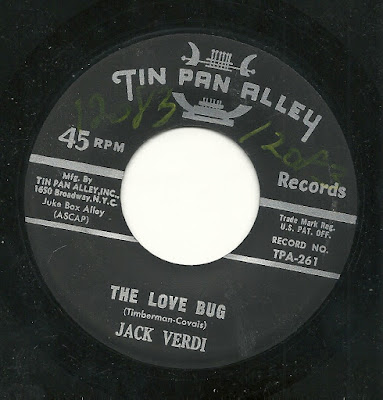 Some eight years or so before The Walt Disney Company released the giant hit film "The Love Bug", someone named Timberman submitted a lyric with the same title to the Tin Pan Alley song-poem factory, where label honcho Jack Covais took a co-writing credit and gave it to singer Jack Verdi, who seems to have been with the company only briefly (perhaps around a year), and who is listed as having appeared on four documented TPA singles.

It certainly can't be for lack of talent. Verdi sells this song quite nicely, and the TPA team give it a nice music bed, and the whole thing lands somewhere between hipster jazz and rat pack cool, albeit with a budget of perhaps 1/100th of what either of those genres would have had to work with, on a legitimate label. Despite that drawback, the team involved here makes this work from start to finish.

The flip side, "I Can't Sleep a Wink Over You", does not work from start to finish, at least not to my ears. It's overwrought, musically unimaginative and lyrically obvious.

Download: Jack Verdi: I Can't Sleep a Wink Over You
Play: 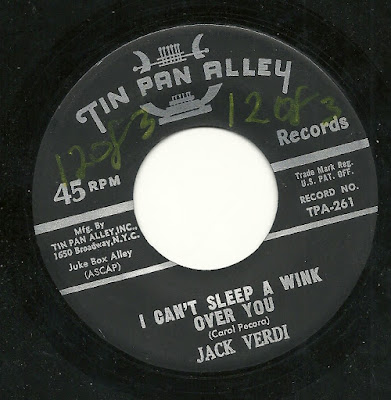