His Name is Barker Bill 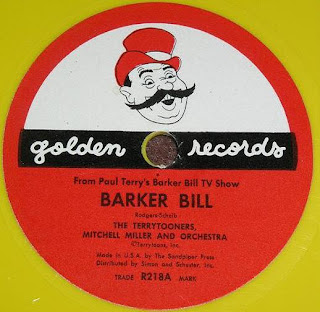 I thought I might toot my own horn here a bit, and share a little piece I recorded almost eight years ago. This was the first recording I did for what I'd hoped would be a quickly recorded follow-up to my 1996 collection of songs "The Many Moods of Bob". That collection was simply a cassette given out to friends and whoever else requested a copy. The new recording was to be a full fledged, well produced CD.

While I've been able to record many tracks since then, all of which sound much better than my earlier recordings, due to better equipment, time has been the enemy, and the project still sits unfinished, with about 35-40 minutes worth of material more or less ready, and another ten or twelve minutes of songs which I just don't seem to be able to find the time to complete.

This piece - a combination of nostalgia and my own strange taste in music - remains one of my favorites.

To fully understand, you have to first hear this Little Golden Record, a five inch yellow 78 which has been in my family's collection, and much beloved, for well over 50 years. It's called Barker Bill, and here is that original children's record:

During a visit to my brother's home in 2000, I used his home studio to record my own version of the song. After recreating the open bars of the Little Golden Record, things get revved up into a whole different style. I created the backing track, playing everything on my brother's keyboard (using midi software), and using all the singers in my family, professional and otherwise, to sing the lines from the two bridge sections. I'm the singer for the main part of the song, including the bass voice and most of the massed voices heard at the end.

Given that I love Caribbean music, and also adore marimbas, it's not surprising that I'm particularly fond of the little instrumental section in the middle of the song.

Hope you enjoy it.

When finished, the album will be titled "A Few More Plans", after a rather strange instrumental piece that I've been playing with for a decade or more. Maybe I'll share that piece, one of these days. In the meantime, if you're of a mind to, let me know what you think of "Barker Bill".
Posted by Bob Purse at 8:16 PM 6 comments: