A Pair of Period Pieces 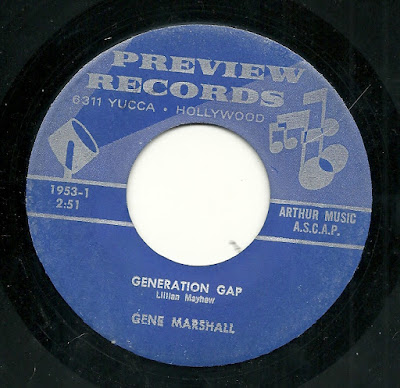 I'm featuring the Preview label for the second week in a row, which is unusual for this site, but I realized that it had been far too long since I featured the great Gene Marshall. So here is Gene with a record that, based on its label number, was released in the early '70's, probably 1971, and based on its lyrics, could hardly have been written and recorded at any other time than within a window of three years or so on either side of '71.

On the first side, the writer of "Generation Gap", decries the wide split between her (or, in Gene's rendition, his) children and their peers, and the not-so-old fogie singing the song. While the song starts out like so many complaints of the age did - bemoaning the gap between the generations, then laying on thick all the things that are wrong with the young folk, displaying quite clearly one of the reasons why there was a gap - in this case, the writer/singer turns it around in the end, into something more hopeful.

While all of this is, admittedly, treacle, I remain impressed at the level to which Gene Marshall sings it, with the cry in his voice while expressing the writers frustration, and the catch that sounds like he's about to start crying at a couple of key moments. Masterful.

On the flip side, we have the deceptively musically upbeat tale of a Vietnam veteran returning home to his fiance, "Put This Ring Upon Your Finger". Everything is bouncing along quite happily, and continues to do so, even after the lyrics tell a different story.

Download: Gene Marshall - Put This Ring Upon Your Finger
Play: 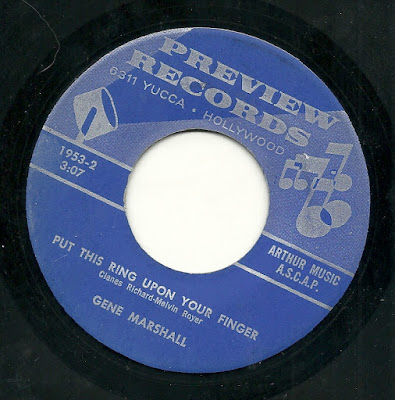 Cleaning and Polishing with His Pledge 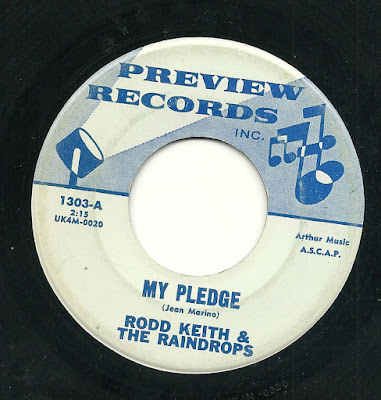 Not a lot of blathering or other great (or lesser thoughts) today. I just wanted to share a nice, solid 45 from Rodd Keith and the Raindrops. First up is "My Pledge", which has a bouncy, driving beat - the drumming here is great - and some keen flute playing, both leading off the track and being heard on a lengthy solo. All that in addition to a typically fine lead vocal from Rodd.

On the flip side, Rodd again benefits from his background in Gospel music, as he dives right into that preacher-style of vocal, and does a credible job on "He'll Answer You". Again, this track features some nice flute playing, including another nice solo, in addition to being heard behind virtually the entire vocal on this unusually long Preview release (3:38, rather than the 2:35 listed on the label) 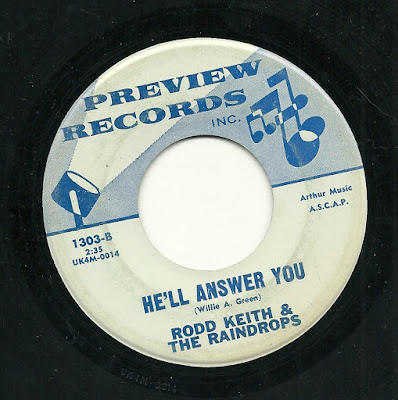 Well, first, I have the final vintage song-poem ad from correspondent Pete. This one is from 1958 and says everything it needs to with very few words.

Three Cheers for Pete!!! THANK YOU!!!

Today, I'm going to indulge my love for the early years of Tin Pan Alley, a period in which they were, to my ears, several steps above what many of the later labels would be doing, in that they were turning out records which actually sound like they might have been intended as attempts at earning actual radio airplay, and, not coincidentally, often were constructed with knowledge and insight into the various forms of music which were popular with the kids of the day. I have two records to share today, one of which is clearly a song-poem, and the other seems more likely to have been a vanity release - more on that later.

First up is, by far, my favorite of the four songs involved. This one is sung by the previously unknown (to me, and to the song-poem database) Lori Knight. "I Love My Honey ('Cause He's Sweet)" is something of a relative to the honest-to-goodness hit record  (and one of my favorite records ever) "I Love My Baby", by Jill Corey, which you can hear here. Obviously, the production and overall talent involved are considerably lower, but this is still what I'm reminded of. I truly wonder if this was deliberate, as Jill Corey's record came out in 1957 (that year being a high point, in my opinion, for pop music), and this record likely was made in 1958.

I'm particularly taken (in case the title of this entry didn't give it away) by the song-poet's use of the phrase "Hooper Dooper", in place of "Super Duper", but the whole thing just makes me smile from start to finish. This one has risen to the top of my playlist faster than anything else in recent months. 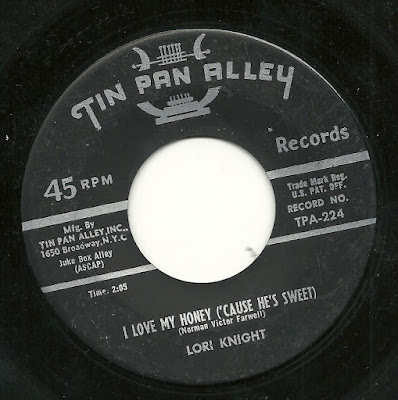 Please note that the song-poem was male, meaning that very likely that either he wrote it for a woman to sing about a boyfriend, or that the good folks at Tin Pan Alley turned the gender around to fit the available singer and the style of the music they'd put to his lyric.

The flip side, "Laugh Again" is a pretty standard 6/8 ballad - what Billboard would have called a "rock-a-ballad" at the time. For those who like such things, it's listenable, without being terribly good or interesting. It does play up some of the weaknesses of the singer and band, which were masked by the enthusiasm and energy of the flip side. 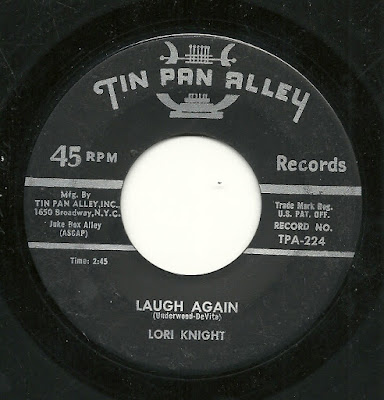 And now for something subtly different: 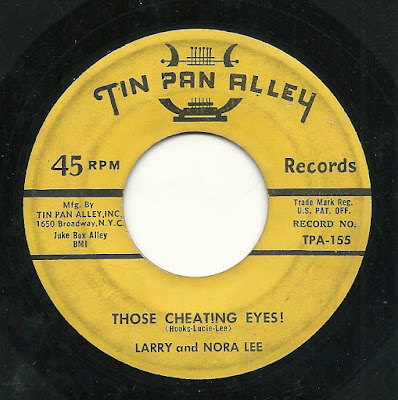 As mentioned above, I believe this to be a vanity record. It comes from TPA's earliest days, which you can read about here. The number on this record comes just before the first documented appearance of Phil Celia, who was the first clear "song-poem singer" on the label - prior to this, there were bands and/or featured group-leaders, including some who were, or became, well known. The biggest clue here, though, is that both songs on the record were written by a team of three people, the same three people on both sides, and that one of those writers had the same last name as the performers.

Nonetheless, it is a TPA record, and as I've been away from this site for almost two weeks, I thought I'd throw in a bonus, so here it is. Of the two exclamation-pointed songs on this record, I much prefer "Those Cheating Eyes!", which manages to make something moderately original, even while repeatedly using the tune of "Row Row Your Boat" and here it is:

That's not to say that the flip-side, "I Guess I'm Lucky!" doesn't have its charms. It swings along happily, with sweet, glad-to-be-in-love lyrics, and sounds (as does the flip side) more than a bit like something that might have come out on my beloved Fable label. 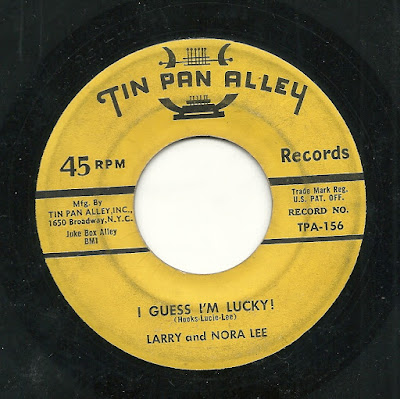