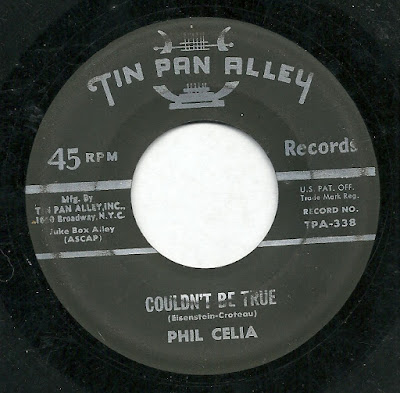 Phil Celia was one of the good ones. Playing back the songs of his which I've posted here (and to WFMU) is one way of compiling a song-poem greatest hits collection. Just a review of those song titles brings a smile to my face: "Moaning and Groaning Twist", "A Fat Man in a Compact Car", "If Butch the Rough Barber Man Shaves Castro", "I'm Sorry I Put On Charlie's Shoes" (admittedly, most of these are in the dead zone of my site, where I still need to go back in and replace the files).

"Couldn't Be True is not, perhaps, at that level, but it's still a fun, night-clubby style record with a lounge-lizard lead vocal, and a fine addition to the Phil Celia collection.

Then, on the other hand, there is "She Kissed Me in a Dream", which is certainly the most ponderous, deadly track I remember hearing from dear ol' Phil. Rarely, apart from Halmark and Noval releases, has three minutes seemed to stretch out so long. (In fact, this sort of sounds like a Noval track to me.) And I'm a big fan of over-the-top echo when it's in the service of something raucous or ridiculous, but in this setting, he just sounds like he's singing in a sewer pipe, and the slow setting plays up some of his vocal limitations.

Download: Phil Celia - She Kissed Me in a Dream
Play: 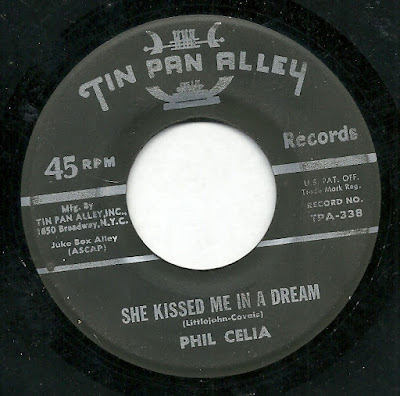 Song Poems For the Cotillion 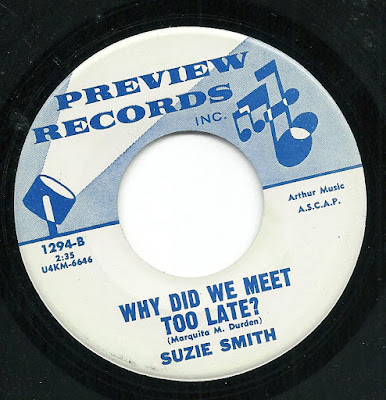 Today we have a single on the Preview label by Suzie Smith, who was also heard a few times in the duo "Suzie and Rodd", and all in all, on a dozen or so Preview releases from the mid 1960's. And Rodd Keith sounds like he's all over this one, too - both tracks, particularly the first one I'm sharing, have the unmistakable sound of Rodd. And what's more, they both sound - to my ears, at least - like something I'd expect to hear from a cool, laid back, but oh so chic combo at a fancy affair/coming out party/ cotillion, etc., particularly the second song I'll be sharing.

"Why Did We Meet Too Late?", I think, is the stronger of the two. I would bet a few nickels that the very direct and heartfelt (if also amateurish) lyrics came from the song-poet's own life. The smooth, soft pop backing has quite a few little things to recommend it, particularly the tasty little piano fills, and Suzie Smith's singing is engaging enough to make this listener (given that I am one who is not particularly drawn to most of the female song-poem singers - Cara Stewart being the exception) wish she was on a lot more Preview releases.

Download: Suzie Smith - Why Did We Meet Too Late?
Play:

On the flip side, we have the extremely Country-Club-sounding "My Dreams". This one starts out strongly, an appealing waltz with a lilting melody introducing the verse, somewhat-more-than-usually effective lyrics, and another really nice vocal. But then it goes on. And on. And on. More of that lilting melody gives way to a lengthy (and boring) piano solo on the baritone keys, and by the time it's done, the solos have stretched for over a minute, and the record drags on for nearly four minutes total. A good edit would have helped this one a lot. 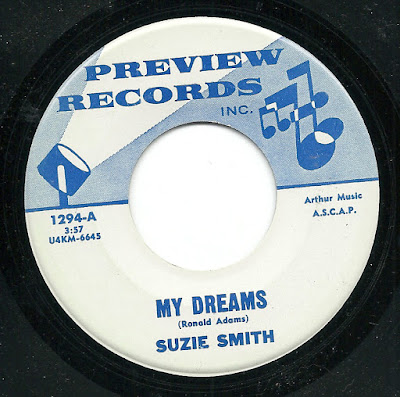 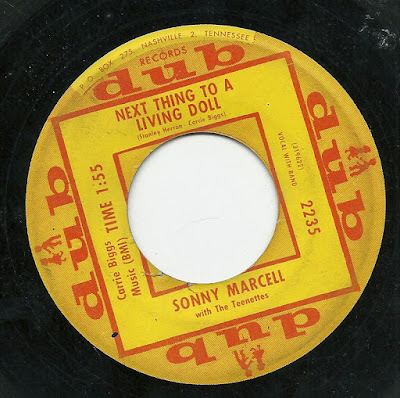 For today's post, let's stumble our way back to circa 1962, and the early days in the career of the man known most often as Sammy Marshall, but here identified as his second most often used aka, Sonny Marcell, heard here with the most excellent backing of the crack back up band, The Teenettes.

This record is on the tiny "Dub Records" label of Nashville, and dates to a point before the Globe song-poem factory developed the bland sheen that infects most of their product from at least the late '60's on, making a good percentage of those records indistinguishable from each other.

In this case, the song "Next Thing to a Living Doll", despite it's incredibly clunky song title, bops right along, and is the sort of record that serves Sammy's talents well. I must admit, though, that I'm taken right out of the mood the song has set so nicely when the lyrics quoted above come out of his mouth: "I'll Be Her Man-Daddy". Oh, will you now!?

Download: Sonny Marcell and the Teenettes: Next Thing to a Living Doll
Play:

The flip side of the single, "Idol of My Dreams" is such a smarmy teener that it fairly drips with Clearasil. A few of the lyrics are as weird, in their own way, as the one I quoted from "Living Doll". "Don't be like a graven image"??? Sheesh. I'll stick with Gene Pitney's absolutely wonderful record of "Mecca" if I want to go down the road of this particular metaphor.

Download: Sonny Marcell and the Teenettes: Idol of My Dreams
Play:

Incidentally, for anyone who might be interested, there is a copy of this record that has been put up for auction, repeatedly, on eBay, and it is available right now. 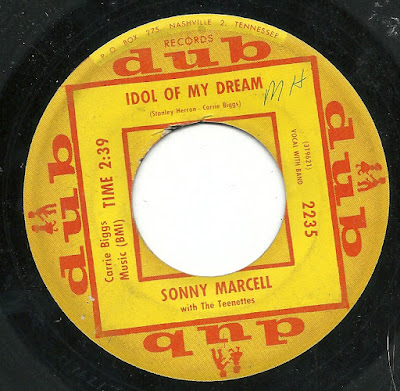 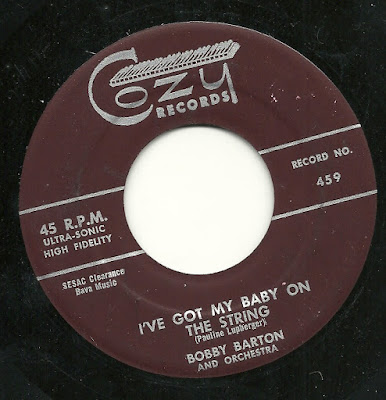 I've got a really nice pair of songs and performances for the first post of the new year, on a label which is new to me, and by a performer who might be new to me. The label is Cozy Records, and while I have no proof that this is a song-poem label, there is a record of the same song-poet writing another song for a known song-poem label. Plus, I think it's at likely that the singer, "Bobby Barton", is the same singer who usually went by the name "Rod Barton", and who made plenty of song-poem records in his day (and who is the only person from the song-poem world that I've ever been lucky enough to talk to).
Both of these sides are bouncy, rockin' fun. My favorite of the two, by a hair, is the slightly oddly titled "I've Got My Baby On the String" (shouldn't that be "on a string"?). For just under two minutes, the band swings, the guitarist provides tasty flavoring, and Bobby gives the lyric the attitude it deserves.
Download: Bobby Barton and Orchestra - I've Got My Baby On the String
Play:
Interestingly, both of these songs seem to very much have a male perspective built into the lyrics, yet both were written by a woman.
The flip side, "You Gotta Quit Whistlin' At My Baby", is almost as fun. It's just a touch slower than the other song, still swinging, but with more of a bump-and-grind feel, particularly in the drums. The singer - whatever his real name - again delivers just the right attitude demanded by the lyrics.
Download: Bobby Barton and Orchestra - You Gotta Quit Whistlin' At My Baby
Play:
Please be sure to note the Ultra-Sonic High Fidelity of both of these tracks.
﻿ 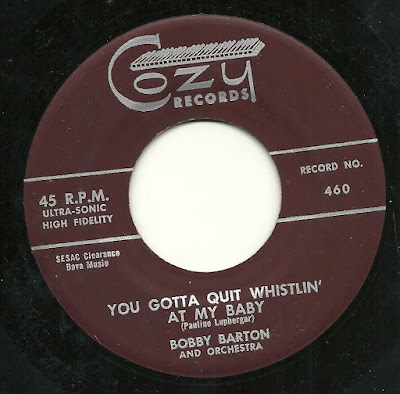