Hand Me Down Girl 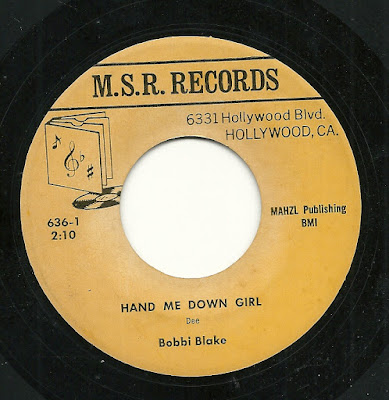 I thought I heard a little bird whisper in my ear "you haven't featured an MSR 45 in almost 15 months". So I went to the box, found one from that label's early days (being that I am strongly non-partial to their latter day releases), and found a nice little song from Bobbi Blake, written by that famous song-poem "Dee", a lyric with a sad story to tell, titled "Hand Me Down Girl". The lousy sound quality is rests entirely on the shoulders of those who pressed this record.

On the flip side, we have an unusually uninspired offering from Rodd Keith (listed here as Rodd Rogers), on "Me and My Guitar".  Not that the songwriter gave him much to work with. At least in this case they gave the guitar a prominent role - I've heard several song-poems about certain instruments which hardly feature the instrument in question, if at all. 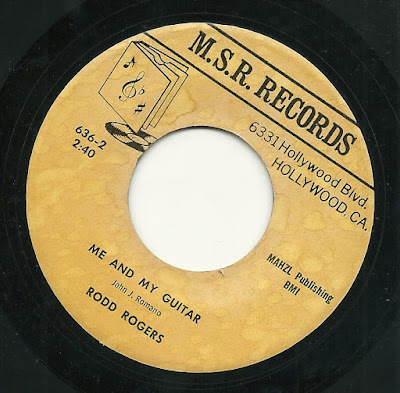 A Travelogue with Sammy Marshall

I really do intend to get back to posting once a week... I can hardly believe how busy my home and work life is getting - I truly intended to get back to once-a-week posting - it's Summer, for God's sake, how much can there possibly be to do. I had no idea....﻿ 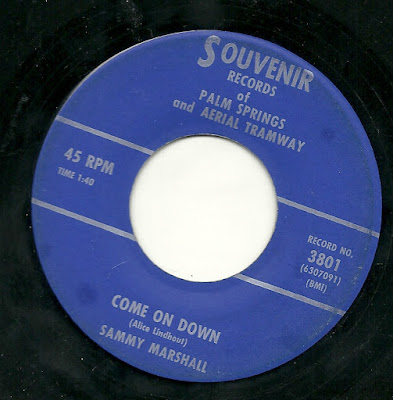 The question for today is: Did Alice Lindhout write today's pair of songs in some sort of official capacity, with a mandate to publicize Palm Springs and the then-brand new Aerial Tramway into the San Jacinto mountains (this would have presumably been in 1963 or, more likely, 1964). Or did she simply take it upon herself to send it two sets of lovely lyrics about her environs and their most recently added feature?

Which is the true story, she (or the city) paid the good (?) folks at the Globe Song-Poem Factory to produce her two songs, with Sammy Marshall offering stellar vocals, and press them up on the "Souvenir Records of Palm Springs and Aerial Tramway" records label. I'm guessing there weren't a lot of releases in the label's catalog.

But these two are lovely, particularly the bouncy "Come On Down". It's a minimalist arrangement, driven by chugging piano and what sounds like a quartet of Sammys, although it could just as well be a real vocal group, supporting Sammy's enthusiastic lead vocal. Whoever is singing (and playing) is a winner from start to finish.

The flip is a more sedate story of The San Jacinto Mountains, here mislabeled as "The Sanjacinto Mountains". Oddly, Ms. Lindhout's lyrics portray the very first reason for going to area being that it grants wishes, with the specific wish one should make being a wish that Sammy Marshall would "be your fella". That would not be my wish. 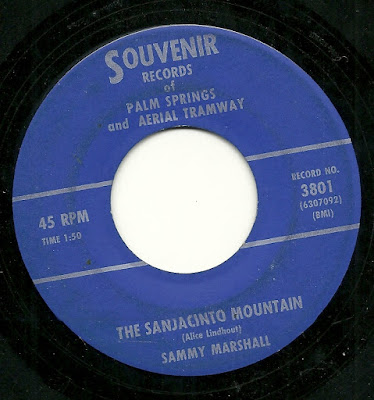 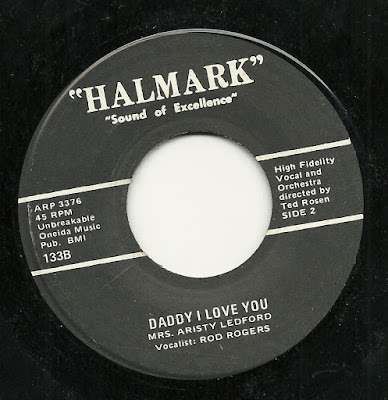 Here is a new addition to my collection of Halmark 45's. And it presents a number of mysteries, at least one of which is completely unseen (at least by me) up to this point in the saga of the song-poem industry.

I very excitedly bid on, and watched myself win, this Halmark 45, because its label indicated that the vocalist was Rod Rogers. This seemed to me an impossibility. Rodd Keith worked in Los Angeles, and the folks at Halmark (in Boston) could very well have barely been aware of him. Rodd had also retired that particular spelling of his nom-de-song-poem when he moved from Preview (where he was Rodd Keith) to MSR (where he remained Rodd Keith for a time then became Rodd Rogers). The name Rod Rogers (in that spelling) hadn't regularly appeared on records since he'd left Film City, in the mid '60's. Given that the majority of the Halrmark records which can be dated seem to come from 1973-76 (although they existed well before and after these dates), it's not even certain that Rodd Keith was still alive when this recording was released. Could Rodd Keith have made a record, near the end of his life, for the Halmark label?

Sadly, that's not the case. The song is called "Daddy I Love You", and it's quite clearly sung by the husband and wife team of Dodie Frost and Jack Kimmel, who were Halmark stalwarts (with Kimmel's name usually shorted to "Jack Kim", when he was credited at all). It's sung over one of Halmark's patented, reusable backing tracks - and they didn't even bother starting over again when the tape stuck a bit and caused a glitch at the very beginning. I find the Frost/Kim Halmark records to be particularly, egregiously horrible, and this one is no exception.

The song itself is a fairly desperate answer record of sorts to the massive hit song "Daddy Don't You Walk So Fast", by the very unfortunate Wayne Newton, which hit number four in Billboard in 1972. While in that song, the father is leaving the mother, only to be pulled back in, for one more try, due to the calls of his daughter, in this case, the child herself is narrating: the mother died in childbirth, and rather than the poignant, life altering moment (or, at least, intended so) of the original song, her lyrics are mostly a complaint that, when her daddy would take her out for a stroll, he would, literally, walk too fast for her. Given the lyrics to this thing, it's downright weird that the title is "Daddy I Love You", which is hardly the main point of the lyrics.

But I would LOVE to know how Rod Rogers' name got attached to this thing.

Okay, so that's one mystery. When I got done with my disappointment after hearing that Rod Rogers was not on "Daddy I Love You", I flipped the record over and saw that the Frost/Kim team were credited on the flip side. For a moment, I thought - "Maybe the artist credits were reversed, and THIS will be Rod Rogers".

But it's not. However, it's also not Frost and Kimmel! It's quite clearly a vanity recording! As I found in a record I posted in January, Halmark apparently pressed up their song-writer's own recordings from time to time. Or, in this case, someone outside of the Halmark facilities singing the song-writer's song. For, unless there are other mistakes on this record (which is entirely possible), this song was also written by the composer of "Dadd, I Love You", Mrs. Aristy Ledford.

The song has the unlikely titled "My Trailways Bus Driver", and it's a true winner. I don't doubt that Mrs. Ledford wrote the song, or at least that some woman did, at least given that it was written in those hetero-centric days, as the lyrics have a definite, "I'm attracted to the male bus driver" tilt to them. Why, then is the vanity recording performed by what appears to be a mail vocalist?

And what a song (and recording) it is. For one thing, if the early lyrics are to be trusted, the driver is apparently holding the singer while driving the bus. Then there's the whole focus of the song, which is literally a tribute to the driver of a bus doing his job. The sound quality is abysmal, and the "High Fidelity Vocal and Orchestra Directed by Ted Rosen", which are described in exactly that way on the label, consist here of a single six-string guitar.

Who is singing this song? Why did Frost and Kimmel get the credit? Why did Mrs Ledford pay for one song to be produced by the Halmark factory yet submitted another one complete and on tape, sung by a male singer with his guitar? And how on earth did the name of Rod Rogers (who may well have been dead by the time this record was released) end up on this 45?

I'd love to hear anyone's thoughts on this matter! 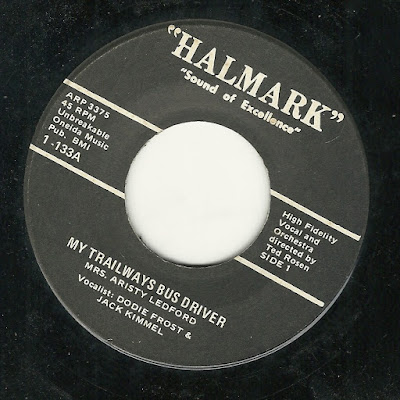