Vintage song-poem ads will return next!

I will however, provide a link to something wonderful. Sammy Reed has posted downloadable and playable links to 23 tracks from earlier in this site's history, all of them dating to those posts where my own links were lost, due to the downfall of DivShare. You can visit that post here. Thanks, Sammy! I do hope to repopulate this site at some point, but something else always takes me away from that project 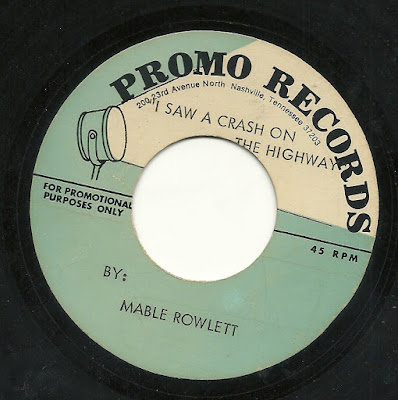 I have never featured the "Promo Records" label before today, and so am correcting that oversight today with a most appropriate ditty. I own perhaps 18 or so of this labels' records, and this is the first one which caught my ear enough to say "you have to share this right away".

Like the Halmark and Noval labels, Promo records did not name their performers, and indicated the budget nature of their work even further by simply typing the song titles and lyricist's names on a generic, un-numbered label. These were also not "records" as are typical shared here, but are more accurately described as Acetates, and one-sided ones at that. (Although I am sharing two songs here, they are not both sides of one record, but two separate records.)

About half of the Promo Records acetates I own were written by Mable Rowlett, and were purchased at the same time, in a bundle. "I Saw a Crash On the Highway" is clearly the outstanding number from the bunch. The phrasing of that title, and the lyrics of some of the verses of the song are all curiously indirect, given that the lyrics make it clear that the narrator of the song caused the crash, which involved fatalities, and that the cause was drinking and driving.

On this New Year's Eve, I hope everyone takes Mabel's lyrics to heart.

Download: No Artist Named: I Saw a Crash on the Highway
Play:

For comparison sake, here is another Mabel Rowlett offering from the Promo Records label, a much more typical number, on a religious theme, titled "On This Mountain". 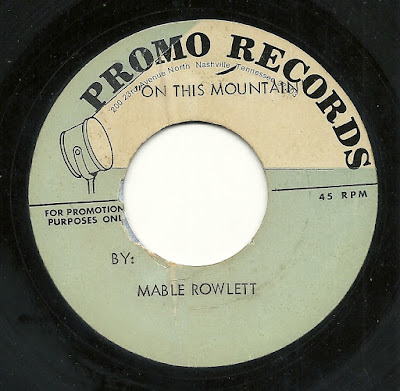 Do You Feel a Draft?

I hope everyone is having a wonderful holiday season! To start this week's post, here is another gift to us from Pete, who tells me that this ad dates back all the way to a 1914 edition of Photoplay! Write in now - he even offers Free Criticism!!!

I know I featured Norm Burns fairly recently, but this record popped up on eBay recently, and I was more than a little intrigued by the title, and was very happy to come away from the auction as the winner. And so, I thought I'd share it all here with you, especially since the weather in much of my country has been so.... drafty recently. 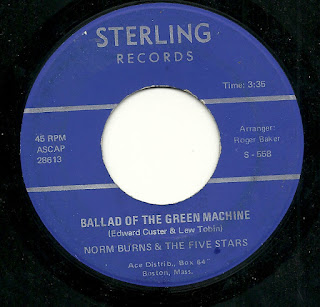 You see, in the song "Ballad of the Green Machine", Ol' Norm, or, more specifically, his lyricist, Edward Carter, recently (in terms of the date of this record) faced the possibility of being drafted, and seems to have signed up willingly instead, if I follow the lyrics correctly, for a three year tour. And so, we get a longish (by song-poem standards - more than 3 1/2 minutes) trip through the soldiering experience.

While not as witty as Tom Lehrer's masterful tribute to the army - and if you haven't heard that, you really should - that's not really a fair comparison, as I'm not sure anyone's lived up to Lehrer on any subject he ever tackled. On it's own merits, this has a bit of dry wit to it, here and there, which I appreciate. And what's more, this is very likely also the only song-poem ever (and I'm willing to bet, one of the few songs of any type, ever) to make reference to Ptomaine Poisoning. I only wish it was a bit livelier - the tempo is really draggy.

Download: Norm Burns and the Five Stars: Ballad of the Green Machine
Play:

The flip side, "Just Drifting Along", does just that, and has very little that I find to appreciate. Your mileage may vary. I do get a weird kick out of the fact that they extended the song by going into a key change in the last several seconds, only to slowly fade the song out, with no further vocal, perhaps to drag the length over two minutes (yet still nearly 30 seconds fewer than what is listed on the label). 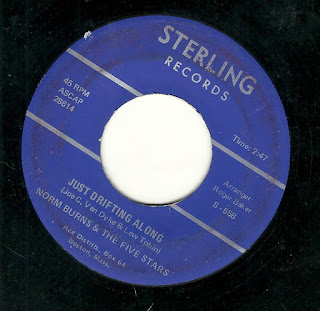 From Ronnie to JFK

Greetings, Song-Poem fanatics!
First off, I'd like to thank reader Graham, for a flurry of comments, some of which were prods for me to start repopulating the old posts with working files. I hope to make a concerted effort to do this soon, and hearing that people are clambering for them (he's not the first) helps push me in that direction. I will announce this when I managed to actually start fixing the old posts. ﻿
Second, here is yet another ad from a 1931 issue of Modern Screen Magazine, courtesy of correspondent Pete: 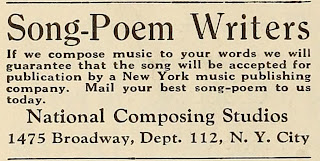 My guess is that the results of this ad's promises would have been sheet music, rather than a record. Thanks, Pete!
And third, here's a record from Ronnie. Ronnie Records that is. I have not featured the Ronnie Label very often. I find their typical product slick, soulless and exceedingly boring. Those aspects are not entirely absent among the four songs on this EP, but there are some things that make me want to share the record. Like many Ronnie records, this one features Sammy Marshall, or, as he was known to purchasers of Ronnie's products, Ben Tate.
﻿ 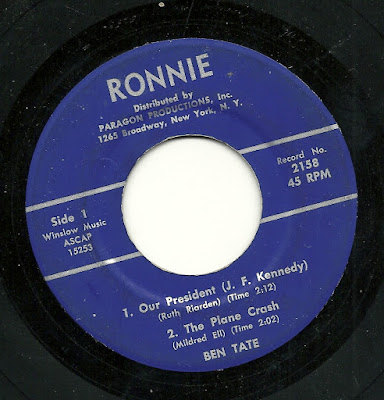 First up, a song I'm featuring as a tie in to the new, highly acclaimed motion picture Jackie, which came out last weekend. It has the clunky title, "Our President (J. F. Kennedy)", and insipid lyrics to match. A true winner!

Next up is perhaps the calmest, most sedate sounding song ever recorded about a "Plane Crash". The writer sounds quite resigned to her fate, secure in the knowledge that she's in God's hands now. This is the antithesis of "D.O.A." by Bloodrock.

Flipping over the record, we find the quintessential Ronnie Records/Sammy Marshall team up, with one of the quintessential song-poem titles, "I Love You". I can't work up enough interest to say anything funny, pithy or otherwise interesting about this song...

However, I GUARANTEE that one listen to the last song, "Please Don't Laugh", will be worth the price of admission. I will not spoil the surprise, but I will say that most listeners will specifically be unable to "not laugh" upon hearing what the good folks at Ronnie did for this song-poem. 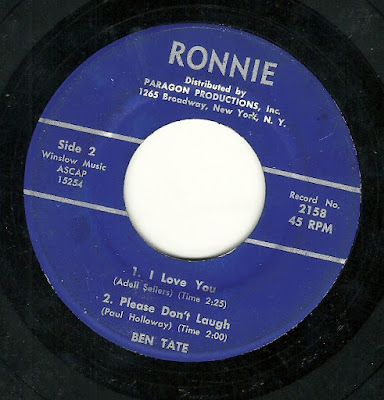 Howdy, folks! First, here's another gift from Pete, a song-poem ad from a 1931 issue of "Modern Screen Magazine". You get a FREE BOOK, too!: 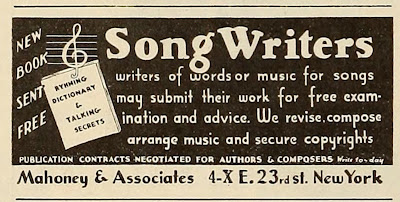 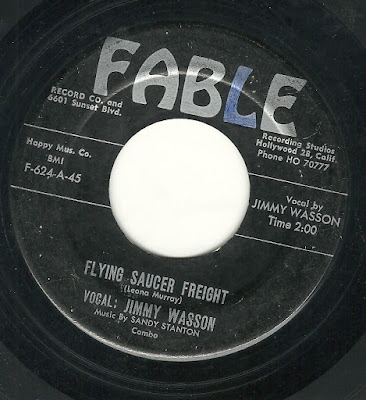 Determining the provenance of Fable Records releases is a real challenge. A good percentage of them seem not to be song-poems, but rather a mix of vanity records, label honcho Sandy Stanton's own compositions done by friends and hangers-on, and attempts at legitimate hits. I shared many of my favorite the (likely) non-song-poem Fable releases back at blog.wfmu.org, and I suggest you look for "Fable Label" there.
Regarding this record, though, I have no doubt. If you search through the "Catalog of Copyright Entries" (a really fun read)﻿, you'll find that today's song-poet was later credited with co-writing songs with both Jack Covais and Lew Tobin, each of whom was the head man at a song poem outfit (Tin Pan Alley and Sterling, respectively). That settles the matter for me.
Here we have the previously unheard Jimmy Wasson, with the ever-present Sandy Stanton Combo, performing Ms. Murray's most excellent "Flying Saucer Freight", at a rollicking good, freight train styled tempo. I'm personally mystified as to what the Flying Saucer references mean, as none of the rest of the song seems to be concerned with Outer Space, but maybe someone more in tune with the jive of them time (or, perhaps, familiar with train lingo) can hep me to what she might have meant.
Regardless, here is yet another mover and groover from Sandy Stanton's wild combo, and a fairly inspired lyricist:
Download: Jimmy Wasson, Music By Sandy Stanton Combo: Flying Saucer Freight
Play:
As seems to be a recurring refrain here, I have no such glowing words for the flip side, also supplied by Ms. Murray, the exceptionally earnest and dull, "No Matter What You Do", also sung by Jimmy Wasson:
Download: Jimmy Wasson, Music By Sandy Stanton Combo: No Matter What You Do
Play: 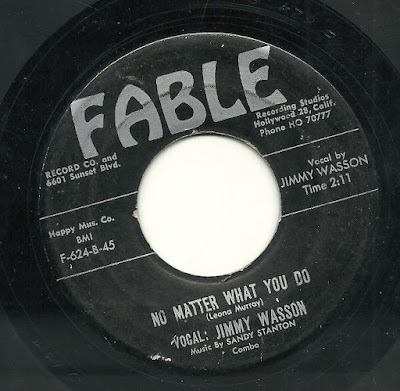 On a personal note, I don't want the day to go by without acknowledging that this would have been my dad's 95th birthday. Wish you were here, dad!﻿
Posted by Bob Purse at 11:23 AM 4 comments: